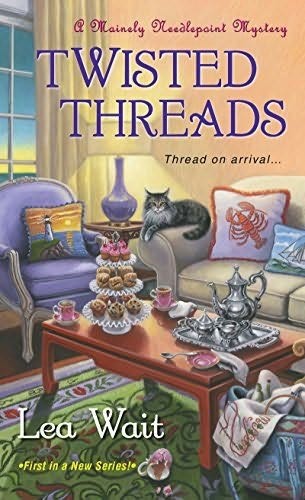 MURDER IN MAINE
“If you don’t mind my asking, why is a Maine State Trooper concerned with the death of a needlepoint business agent? Seems to me you should be working on cases a little more serious. Like my daughter’s murder.” Gram had laid out what I’d been thinking.
“Well, it appears we have a couple of issues with Mr. Lattimore,” Ethan said. “First, as I’ve mentioned, we need to find his next of kin to notify them of his death. And, then, there’s the possibility he didn’t die of natural causes.”
Ethan was sitting as though he was at attention, showing no emotion. What had happened to the friendly Ethan I’d talked to on my first day home?
“What?” I said, practically jumping out of my chair. “The man wasn’t young. He looked almost emaciated. He drank, and he hung out at a casino. All that happened was he started throwing up, like he had the flu. Anyone could have the flu. Then he had a seizure. I don’t know what you’re thinking, but just because a man gets sick in this house doesn’t mean we had anything to do with it!”
“I didn’t say you did,” Ethan said, still not smiling. “And until we get the autopsy results, we won’t know more. But the doctor at the hospital said vomiting and seizures don’t usually come together. And Lattimore’s pupils were dilated. You said he’d been drinking. He also could have been using drugs—maybe amphetamines.” Ethan looked from one of us to the other. “Or he could have been poisoned. . . .”
TWISTED THREADS
Lea Wait

All copyrighted material within is Attributor Protected.
Table of Contents
MURDER IN MAINE
Title Page

Chapter One
Take your needle, my child, and work at your pattern; it will come out a rose by and by. Life is like that—one stitch taken patiently and the pattern will come out all right like embroidery.