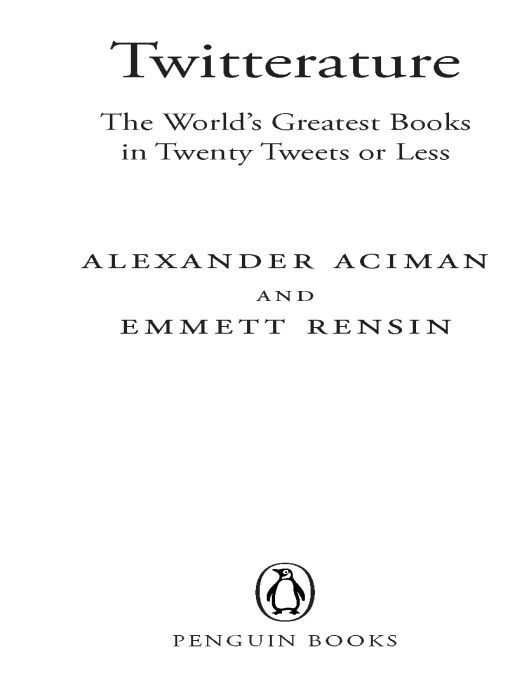 Table of Contents
Title Page
Copyright Page
Dedication
Introduction
Â
The Catcher in the Rye
The Da Vinci Code
Paradise Lost
The Metamorphosis
The Stranger
Oedipus the King
Childe HaroldÊ¼s Pilgrimage
Slaughterhouse Five
Harry Potter (1-7)
The Red and the Black
Macbeth
The Hobbit
A Portrait of the Artist as a Young Man
The Great Gatsby
The Iliad
Hamlet
The Overcoat
The Old Man and the Sea
The Inferno
A Hero of Our Time
Beowulf
Candide
Doctor Faustus
Emma
EnderÊ¼s Game
Great Expectations
Heart of Darkness
King Lear
Lysistrata
In Cold Blood
Medea
Nineteen Eighty-Four
On the Road
Notes from Underground
Of Mice and Men
Robinson Crusoe
Romeo and Juliet
Anna Karenina
Sherlock Holmes
Eugene Onegin
The Crying of Lot 49
The Epic of Gilgamesh
The Odyssey
The Picture of Dorian Gray
The Sorrows of Young Werther
The Sound and the Fury
The Story of My Life
All Quiet on the Western Front
To Kill a Mockingbird
The Life and Opinions of Tristram Shandy, Gentleman
Ulysses
Venus in Furs
Waiting for Godot
Watchmen
Mrs Dalloway
Crime and Punishment
Wuthering Heights
Lolita
GulliverÊ¼s Travels
The Wall
Pride and Prejudice
Sir Gawain and the Green Knight
The Adventures of Huckleberry Finn
Frankenstein
All the Pretty Horses
SwannÊ¼s Way
The Aeneid
The Devil in the Flesh
Dracula
The Rime of the Ancient Mariner
The Waste Land
Lady ChatterleyÊ¼s Lover
Jane Eyre
AliceÊ¼s Adventures in Wonderland
The Tempest
Madame Bovary
Death in Venice
The Three Musketeers
Twilight
Moby-Dick
Don Quixote
The Canterbury Tales
Sgt PepperÊ¼s Lonely Hearts Club Band
Â
Glossary
Acknowledgements
Index
PENGUIN BOOKS
TWITTERATURE
“The classics are so last century.”â
The Guardian
Â
“Sincerest apologies to Shakespeare, Stendhal, and Joyce: how were we to know it would come to this?”â
Mashable.com
Â
“The trouble with Twitter is, I think, that too many twits might make a twat.”âDavid Cameron
Â
“
Twitterature
makes me want to punch someone, preferably the âauthors.' They're in Chicago. I'm gonna take a road trip.”
â@damig, Twitter
Â
“A move likely to be greeted by book lovers with a mixture of horror and why-didn't-I-think-of-that jealousy.”
â
Chicago Tribune
Â
“Just f *#%ing shoot me now.”
âMike C.,
grouchyconservativepundits.com
ALEXANDER ACIMAN was born in 1990. A sophomore at the University of Chicago, he was graduated from Horace Mann School in New York City. He has worked in the offices of several publications, including
The Paris Review
and the late
New York Sun,
which he and the city of New York mourn every day upon noticing its absence from every newsstand as the copper sun rises to greet the metropolis. He has published many articles in both his high school and college newspapers, as well as three feature article-essays in
The New York Times
and one in
The New York Sun.
He is also a devoted follower of Napoleon Bonaparte. He believes that there is no better way to start a day than with a run or a bike ride, and is known on occasion to enjoy a game of bocce or to engage in pugilism. He would like to write, own a pair of John Lobb shoes, and live out his days reading and writing in the Mediterranean basin with his brothers.
Â
EMMETT RENSIN was born in 1990. He is a sophomore at the University of Chicago, before which he attended the finest parochial school in all of Los Angeles. A Huffington Post contributor and ordained reverend, and unable to tie his shoelaces at the tender age of sixteen, he gave it all up to pursue his true dream: putting stickers on books. This he did with care and devotion for many long hours, ensuring that every book in the reference library of the world-renowned Museum of Jurassic Technology at which he was employed had its lovely laminated ascension number neatly stuck upon its spine. He emerged from this a brighter and more worldly man. Rensin contributes to the University of Chicago's
Chicago Maroon
as well as the Huffington Post but takes care to balance his stresses with the relaxing arts of coat collection and Richard Nixon enthusiasm. Such balance is necessary, as extremity might cause Rensin's untimely death and prevent him from accomplishing his three life goals: penning the Great American Novel, mastery of card magic, and telling the perfect shaggy-dog joke. 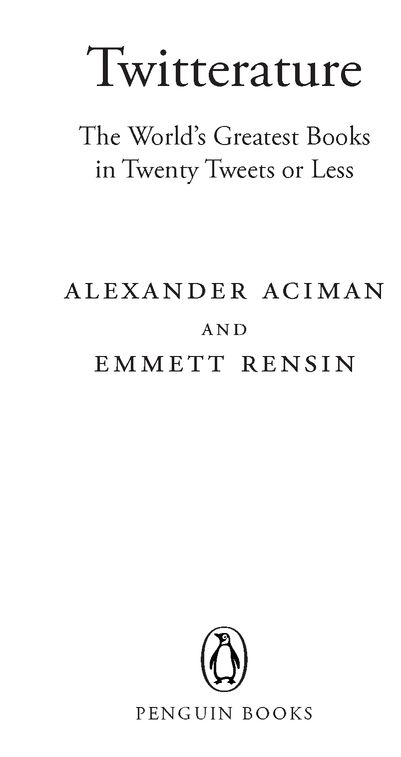 Dedicated in Loving Memory
to the Victims of the R.M.S.
Titanic
Introduction
Life can offer us no greater treasure than art. It is all that is beautiful, and all that allows a man's soul to take leave of the quotidian trifles that molest his waking mind, to be lifted to the highest peaks of experience, and to peer briefly into the sublime. It is that which removes man from the static residue of time and casts him into the gentle waters of the eternal. It is to hear and to speak softly in the beauteous tongue of antiquity, and yet to foresee all that will unfold through the illimitably growing passage of our universe.
In short, art is pretty sweet.
What a
tragÃ©die
, then, that so many modern people find the great works of literature inaccessible, overwhelming, and even, perhaps, dull. It is not a defect of their character, nor any special ineptitude that has disposed them in this manner; rather, these great texts - timeless as they may be - are, in their present form, outdated. Who but college students, hermits, and disciples of the disgraced John Ludd can muddle through them with any hope of understanding? This is what we seek, through our humble efforts, to remedy.
While some may describe the reinvention of our world's Great Works to suit the ever-evolving brain of the modern man as âa triviality', âa travesty', or âthat sucks', we prefer to think of ourselves as modern-day Martin Luthers. Herr Luther took the Holy Scripture itself, and seeing that the classic Vulgate no longer spoke to the souls of his contemporaries, he translated it into the vernacular of his time. By doing so, Luther unleashed a revolution of faith and literacy upon sixteenth-century Europe that had not been seen before and has not been equaled since.
In our own way, and in our own time, we hope to do the same.
However, it's probably best if we stay clear of the Bible.
You may be wondering, good sirs, what exactly we intend to do with these great works of art. What one must keep in mind is that the literary canon is not valued for its tens of thousands of dull, dull words but for the raw insight into humanity it provides. While perhaps an unwieldy tome was the best method of digesting this knowledge during a summer spent in the Victorian countryside in the Year of Our Lord, Eighteen Hundred and Seventy-Three, times have changed. Virginity must not be distracted with books, nor damsel-chasing pacified with poetry. Instead we must run free into the world and not once look back.
And so, we give you the means to absorb the strong voices, valuable lessons and stylistic innovations of the Greats without the burdensome duty of hours spent reading. We take these Great Works and present their most essential elements, distilled into the voice of Twitter -
the social networking tool that with its limit of 140 characters a post (including spaces) has refined to its purest form the instant-publishing, short-attention-span, all-digital-all-the-time, self-important age of info-deluge -
and give you everything you need to master the literature of the civilized world.
For indeed, does any man have such great pretense as to suppose that he may digest all that it is right and proper for him to have digested in the stunted mortal fit granted to him by Providence? Perhaps in the eighteenth year of your life you sat on a porch asking yourself:
What exactly is Hamlet trying to tell me? Why must he mince words and muse in lyricism and, in short, whack about the shrub?
Such questions are no doubt troubling - and we believe they would have been resolved were the Prince of Denmark a registered user on
Twitter.com
, well versed in the idiosyncrasies and idioms of the modern day. And this, in essence, is what we have done. We have liberated poor Hamlet from the rigorous literary constraints of the sixteenth century and made him - without losing an ounce of wisdom, beauty, wit, or angst - a happening youngster. Just like you, dear reader.
ADS
15.4Mb size Format: txt, pdf, ePub

A Shimmer of Angels by Lisa M. Basso
BelleBehindBars by Wynter Daniels
The Tycoon's Paternity Agenda by Michelle Celmer
Wrangler by Dani Wyatt
The Trinity Game by Chercover, Sean
The Baker's Boy by J. V. Jones
Primal Instincts by Susan Sizemore
Adventures of a Cat-Whiskered Girl by Daniel Pinkwater
The Scatter Here Is Too Great by Bilal Tanweer
The Promise Pact (Promise to Love Book 1) by J. A. Fraser
Our partner