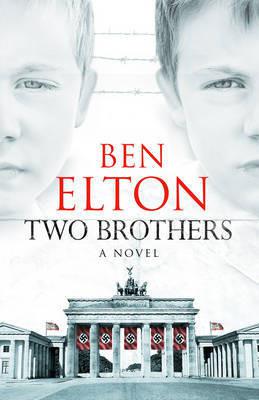 United and indivisible, sharing everything.

Twins in all but blood.

As Germany marches into its Nazi Armageddon, the ties of family, friendship and love are tested to the very limits of endurance. And the brothers are faced with an unimaginable choice...

Which one of them will survive?

An Operation is Cancelled:
Berlin, 1920

Two Parties and a Crash:
Munich, Berlin and New York, 1929

Visitors to the Surgery:
Berlin, 1933

A Party Is Announced:
Berlin, August 1933

The Fischers Throw a Party:
Berlin, 1933

Rejected on Grounds of Race:
London, 1956

The Night of the Broken Glass:
Berlin, November 1938

The Last Meeting of the Saturday Club:
Berlin, February 1939

The Morning After:
The German–Dutch Border, 1939

From Untermensch to Superman:
Berlin, 1940

A Marriage is Discussed:
Berlin, 1940

Continued Conversation in the Park:
Berlin, 1956

In the Garden of Innocence:
Berlin, 1956

Two Brothers
is dedicated to two cousins, my uncles:

The Girl on the Cart

FRIEDA STENGEL WOKE from a dream filled with tiny kicks to find her nightdress and her bedding soaking wet.

It was past dawn but the coming of day had done little to relieve the darkness and gloom of the long freezing night that had preceded it. Her breath hung heavily in the dull light as she shook her husband awake.

‘Wolfgang,’ she whispered. ‘My waters have broken.’

He sat up in bed with a jolt.

‘Right!’ he said, staring about wildly, struggling to surface. ‘Good! Everything’s fine. We have a plan.’

‘I’m not in labour yet,’ Frieda said soothingly. ‘No pain. No cramps. But they’re on their way, that’s for sure.’

‘Keep calm,’ Wolfgang said, tumbling out of bed and tripping over the boots he’d left close at hand for just such an awakening. ‘We absolutely have a plan.’

Frieda was expecting twins and so had been guaranteed a place in a hospital for the delivery. The Berlin Buch medical school was several kilometres across the city from Friedrichshain, where they lived. As she struggled into her clothes Frieda could only hope that the babies were in no hurry.

Wolfgang took his wife’s arm and they groped their way down the five flights of stairs from their apartment to the street below. There was a lift but it was ancient and rickety and they had decided that the tiny iron cage was not to be trusted for such a crucial journey.

‘Imagine if we got stuck and you had the babies between floors,’ Wolfgang joked. ‘It’s only licensed for three people! That bitch of a concierge would probably report us to the housing collective.’

The sky that lowered over the young couple as they stepped out on to the icy pavement was so dark and so grey that it might have been forged from iron in the furnaces of the famous Krupps foundry in Essen and then bolted above Berlin with rivets of steel. Berlin seemed always to be huddling beneath such gunmetal skies. The war winters and those that followed had been cruel indeed and as the wet and frozen early morning workers hurried past the young couple, bent low in the teeth of biting eastern winds, it was hard for Frieda and Wolfgang to remember that there had ever been any other season in Berlin but winter. That there had once been a time when every tree on Unter Den Linden had dazzled in garish bloom and up and down the Tiergarten old gentlemen had removed their jackets and girls had gone without stockings.

But spring and summer were a distant memory in that February of 1920, a dream of better times before the catastrophe of the Great War exploded over Germany. Now the skies seemed always to have been beaten out of cannons and to thunder as if just beyond the horizon in the fields of Belgium and France and across the endless Russian steppes real cannons still roared.

There were of course no taxis to be found even if they could have afforded one, and inevitably the trams were on one of their regular strikes. The Stengels had therefore arranged to borrow a hand cart from the local greengrocer.

Herr Sommer was waiting for them when they arrived outside his shop, with the cart and a bouquet of carrots tied up with ribbons.

‘Pink and blue,’ Sommer said, ‘because Wolf assures me you’re going to have a boy and girl. An instant family, all the bother done with in one go.’

‘They’ll both be boys,’ Frieda replied firmly. ‘So watch out for trouble, they’ll be pinching your apples in a few years!’

‘If I have any apples,’ the grocer replied ruefully as Wolfgang began to push the cart away, slipping and clanking across the icy stones and cobbles.

Just then there was a burst of automatic gunfire somewhere in a nearby street, but they ignored it, as they also ignored the shouts and the screams that followed the clattering boots and the sound of breaking glass.

Gunfire, boots and breaking glass were just the sounds of the city to Wolfgang and Frieda, they didn’t really notice them any more. As commonplace in Berlin as the cry of the newspaper vendor, the bird song in the parks and the rattle of the trains on the elevated railway. Everybody ignored them, keeping their heads down, hurrying along, hoping not to be delayed in getting to whatever queue it was they were planning to join.