UFOs Generals, Pilots, and Government Officials Go on the Record 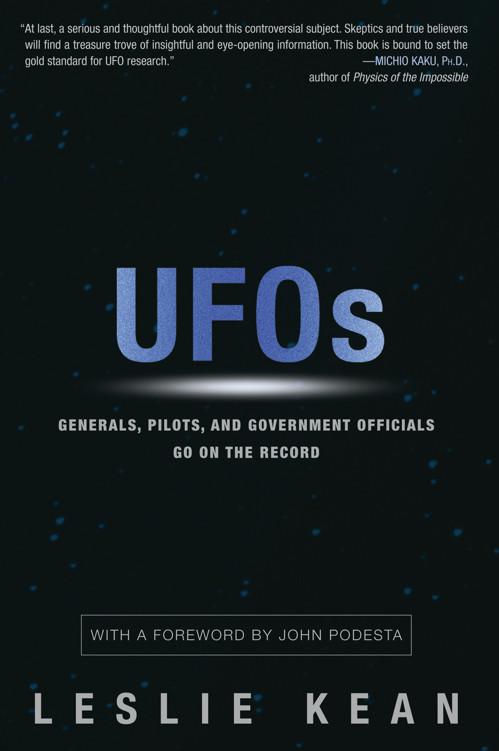 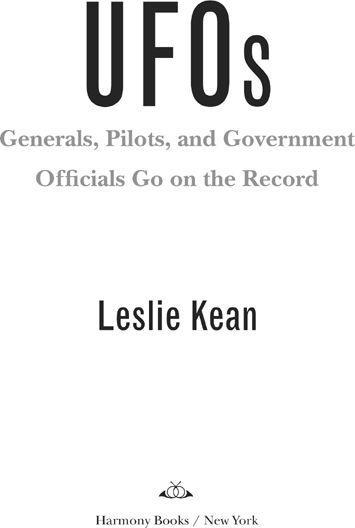 3: Pilots: A Unique Window into the Unknown

Part 2:
In the Line of Duty

11: The Roots of UFO Debunking in America

15: UFOs and the National Security Problem

16: “A Powerful Desire to Do Nothing”

Part 3:
A Call to Action

21: Fighting Back: A New UFO Agency in America

As someone interested in the question of UFOs, I think I have always understood the difference between fact and fiction. I guess you could call me a curious skeptic. But I’m skeptical about many things, including the notion that government always knows best, and that the people can’t be trusted with the truth. That’s why I’ve dedicated three decades of my life, in private practice, as counsel to the Senate Judiciary Committee, at the White House under President Clinton, and now with the Center for American Progress, to the fundamental principle of protecting openness in government.

Because of this commitment, I have supported the work of investigative journalist Leslie Kean and her organization, the Coalition for Freedom of Information, in their initiative, launched in 2001, to obtain documents about UFOs through the Freedom of Information Act. In the spirit of inquiry, Kean successfully sought an injunction in federal court on one important case, as was her right under the law.

The time to pull the curtain back on this subject is long overdue.
UFOs: Generals, Pilots, and Government Officials Go on the Record
involves just such an effort, and it appeals to open-minded people such as myself. Presenting the facts, the book includes statements from only the most credible sources—those in a position to know—about a fascinating phenomenon, the nature of which is yet to be determined. Kean and her impressive team of contributors make no untoward claims, but provide a rational analysis of the most pertinent information, much of it presented here firsthand in riveting detail, stating that further investigations are needed. Kean has more than done her homework as a dogged investigative reporter, diligently contending with this perplexing subject for ten years while having to face attitudes of ridicule and denial within government. Yet she persevered, and her book clearly leaves the taboo against taking UFOs seriously with no leg to stand on.

Kean and her distinguished co-writers call for the establishment of a small U.S. government agency to cooperate with other countries that are already formally investigating, reviewing, and releasing information relevant to UFOs. This new agency would handle release of documents and any future investigations with openness and efficiency. It’s an idea worth considering, and it is definitely time for government, scientists, and aviation experts to work together in unraveling the questions about UFOs that have so far remained in the dark. It’s time to find out what the truth really is that’s out there. The American people—and people around the world—want to know, and they
can
handle the truth.
UFOs: Generals, Pilots, and Government Officials Go on the Record
represents a pivotal step in that direction, laying the groundwork for a new way forward.

T
en years ago, as an investigative reporter working for a California public radio station, I was suddenly confronted with a seemingly impossible reality. A colleague in Paris sent me an extraordinary new study by former high-ranking French officials documenting the existence of unidentified flying objects and exploring their potential impact on national security. Now known as the COMETA Report,
1
this unprecedented white paper marked the first time in any country that a group of this size and stature had declared that UFOs—solid but as yet unexplained objects in the sky—constitute a real phenomenon warranting immediate international attention.

The distinguished COMETA authors—thirteen retired generals, scientists, and space experts working independently of the French government—had spent three years analyzing military and pilot encounters with UFOs. In the cases they present, all conventional explanations of something natural or man-made had been eliminated by the authors and their associated teams of experts, and yet these objects were observed at close range by pilots, tracked on radar, and officially photographed. They achieved tremendous speeds and accelerations, made sharp, right-angle turns in a flash, and could stop and stand still in midair, seeming to defy the laws of physics. What could this mean? Since some of the military officers on the COMETA panel were serving with the French Institute of Higher Studies for National Defense, a government-financed strategic planning agency, their characterization of UFOs as a phenomenon with possible national security implications assumed a grave importance.

In their ninety-page report, written with objectivity, clarity, and logic, the authors explained that about 5 percent of sightings—those for which there is enough solid documentation to eliminate other possibilities—cannot be easily attributed to earthly sources, such as secret military exercises or natural phenomena. This 5 percent seem to be “completely unknown flying machines with exceptional performances that are guided by a natural or artificial intelligence.” In its startling conclusion, the authors state that “numerous manifestations observed by reliable witnesses could be the work of craft of extraterrestrial origin.” In fact, they wrote, the most logical explanation for these sightings
2
is “the extraterrestrial hypothesis.”

This did not mean that they accepted this conclusion as fact or had any particular beliefs about it one way or the other. They made very clear that the nature and origin of the objects remain unknown. By “hypothesis,” the authors simply meant an unproved theory, a
possible
, plausible explanation that needed to be tested before it could be decided, but remained only a thesis until that happened. However, the conviction with which they put forth this theory as the “most likely” solution to the puzzle, since others had been ruled out in so many cases, was provocative. Official data about UFOs from around the world was accessible to the members of the group, and they were determined to respond rationally, avoiding prejudice. They did so without reserve.

Who were the people making these statements? Among them, all retired, were a four-star general,
3
a three-star admiral, a Major General, and the former head of the French equivalent of NASA. It was their credentials that made the report worthy of serious consideration. Other military officers, engineers, scientists, a national chief of police, and the head of a government agency studying the phenomenon completed the impressive contributing group. The study was not a government-sanctioned one, but was undertaken independently, and then presented to the highest levels of government in France.

How My Summer Went Up in Flames by Doktorski, Jennifer Salvato
The Dead Detective by William Heffernan
La ciudad y la ciudad by China Miéville
Pain & Wastings by Carrie Mac
The Fall of Neskaya by Marion Zimmer Bradley
Hank Reinhardt's Book of Knives: A Practical and Illustrated Guide to Knife Fighting by Hank Reinhardt
This Side of Heaven by Karen Kingsbury
All the Possibilities by Nora Roberts
The Invisible Husband by Cari Hislop
Ellis Peters - George Felse 03 - Flight Of A Witch by Ellis Peters
Our partner