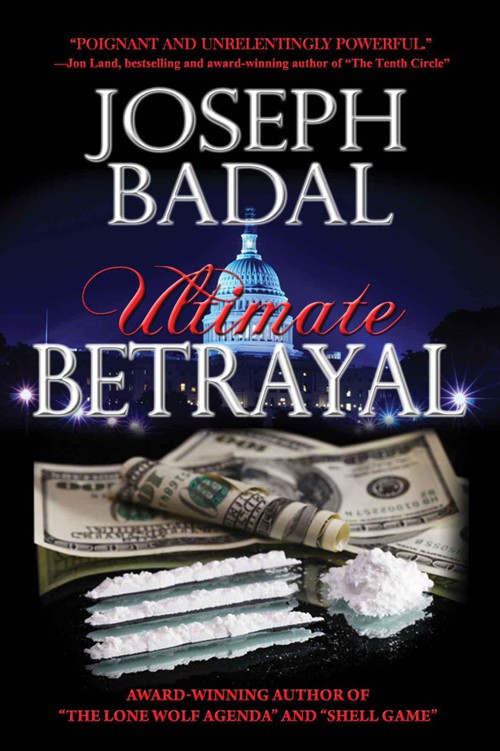 Amazon, the Amazon logo, and AmazonEncore are trademarks of
Amazon.com
, Inc., or its affiliates.

OTHER BOOKS BY JOSEPH BADAL

“Ultimate Betrayal” is dedicated to Trinity Badal, a wonderful granddaughter who right from the start possessed the key to my heart.

“Ultimate Betrayal” is my seventh novel and, as with the others before it, would not have happened without the support, hard work, and guidance from a number of people.

My thanks go to John and Shannon Raab for their work in editing, publishing, and marketing of “Ultimate Betrayal.” As usual, Shannon did a masterful job in creating the cover for this novel.

A number of friends reviewed the manuscript and made valuable suggestions that improved the read, corrected my German, and gave me encouragement. They include Stuart & Rosalie Sherman, Inge Taylor, Nick Franklin, and Tom Avitabile.

The inspiration for this book came from experiences I had while serving in the U.S. Army in Vietnam in 1971-72. Although the back story in “Ultimate Betrayal” is based on my protagonist’s service in Afghanistan, much of the action and references to activities in Afghanistan were drawn from Vietnam experiences.

Finally, I want to thank all those wonderful men and women who have read my previous books. Your support provides valuable and continuous inspiration.

“Crisp writing, masterful pacing, and characters to genuinely care about. This is what top-notch suspense is all about.”

“ “Ultimate Betrayal” provides the ultimate in riveting reading entertainment that’s as well thought out as it is thought provoking. Both a stand-out thriller and modern day morality tale. Mined from the familial territory of Harlan Coben, with the seasoned action plotting of James Rollins or Steve Berry, this is fiction of the highest order. Poignant and unrelentingly powerful.”

—Jon Land, bestselling and award-winning author of “The Tenth Circle”

“Joseph Badal has surpassed his own high standards once again. He pulls out all the stops in his new standalone thriller “Ultimate Betrayal,” a tale of crime, espionage, family tragedy, family ties, and ultimately justice and redemption.

“He is the master of the cinematic thriller, in the best sense of the term. His trademark short chapters from multiple points of view take readers on a rocket ride into the worlds of military service, government agencies, law enforcement, family bonds, and organized crime. If you haven’t read a Badal thriller before, “Ultimate Betrayal” is a great first step in immersing yourself in his body of work.

“So put on a pot of coffee and fasten your seat belt.”

“Joseph Badal has done it again. “Ultimate Betrayal” packs action and revenge into an international conspiracy thriller you won’t soon forget. Read it!”

“Joe Badal keeps getting better and better. He knows how to spin a multi-viewpoint thriller without losing the reader, and he knows the international stage so well that he can take us to both exotic and down-home places in a story that flows effortlessly. And uniquely, he can ratchet up the action to a fever pitch without burying us in pages of techno babble. In this tale of “Old World vengeance without New World remorse,” you’ll love the good guys and hate the bad guys—just as it should be.”

“Filled with unexpected twists, unconventional allies and a master-mind villain who makes hired killers look like kindergarten teachers. “Ultimate Betrayal” is Joseph Badal’s best book yet. A must-read for anyone with a craving for a fast-paced, action-packed, beautifully constructed thriller.”

If someone had asked eighteen-year-old David Hood to define happiness, he wouldn’t have had an answer. He couldn’t remember what happiness felt like. But he could answer a question about the meaning of life. David knew all about life. Life was hard work, always doing your best, and getting by. Just getting by. He also knew what life wasn’t. Life wasn’t about the triumph of good over evil.

At 6’2” and 175 pounds, David had the broad shoulders, trim waist, and long, powerful legs of an athlete. He carried himself confidently. Neighbors considered him courteous and respectful—someone who never got into trouble. He was on time for work every day, worked hard, and kept his mouth shut. All qualities that Gino Bartolucci valued.

David rehearsed aloud what he would say to Mr. Bartolucci as he walked down Broad Street. He’d worked in the sprawling Bartolucci Market after school, on weekends, and during the summer for the last four years. Now that he had his high school diploma, he felt he owed Mr. Bartolucci an explanation for what he was about to do. Out of respect. Then he’d have to tell his father.

Gino Bartolucci owned a number of “legitimate” businesses, including Bartolucci’s Market. But his real money came from numbers running, bookmaking, loan sharking, and the protection racket. But eighteen-year-old David Hood figured Mr. Bartolucci’s mob connections had nothing to do with him. The mob was a part of South Philadelphia—always was, always would be. What really mattered to David was that Mr. Bartolucci gave him a job he badly needed and always treated him fairly. Like a father treats a son.

After he turned down a side street, he walked six blocks of maple tree-lined row houses to the South Philadelphia produce district and stopped across the street from the market. The aromas of frying sausages and peppers reached him and he breathed them in as though his life depended on it. The familiar faces of shoppers as they inspected fruit and vegetables in the sidewalk bins made him sad. Very soon, this would all be part of his past. He already felt homesick.

David crossed the street and entered the market, an open-air affair that could have been transplanted from Sicily. Garlic sautéed in olive oil cut the sweet smell of oregano-laced
salsicci
. Somehow the fragrances of fresh-cut flowers survived the spicy onslaught from the grill. Mr. Bartolucci called this collage of aromas “Italian perfume.” The raucous sound of people who argued in Italian and English over prices and the quality of the produce seemed almost melodic.

David watched Mr. Bartolucci come out of his office, his arm wrapped around the shoulders of his fifteen-year-old daughter, Carmela, who was already taller than her five-foot, six-inch father. The girl batted her eyelashes at David, who ignored her. All David ever noticed about Carmela were the rubber band-held braces on her teeth and the maroon and white Catholic school uniform that hung like a tent on her more-than-plump body. She was too young, fat, and silly. Besides, David didn’t encourage relationships with girls. They always wanted to know his inner thoughts and feelings. He didn’t want them to ask questions. They might not like his answers.

Gino greeted David with a wave of a ham hock hand and a “
Ciao, Bello!
”

“Mister Bartolucci, could . . . could I talk with you for a minute?”

“
Certo, Michel
,” he responded. “
Uno momento
.” Bartolucci barked a stream of orders in Italian in his sandpaper basso voice to two Sicilian immigrant employees and then told his daughter to get an ice cream cone. He turned to David and asked with the usual rough edge to his voice, but with softness in his eyes, “You need something?”