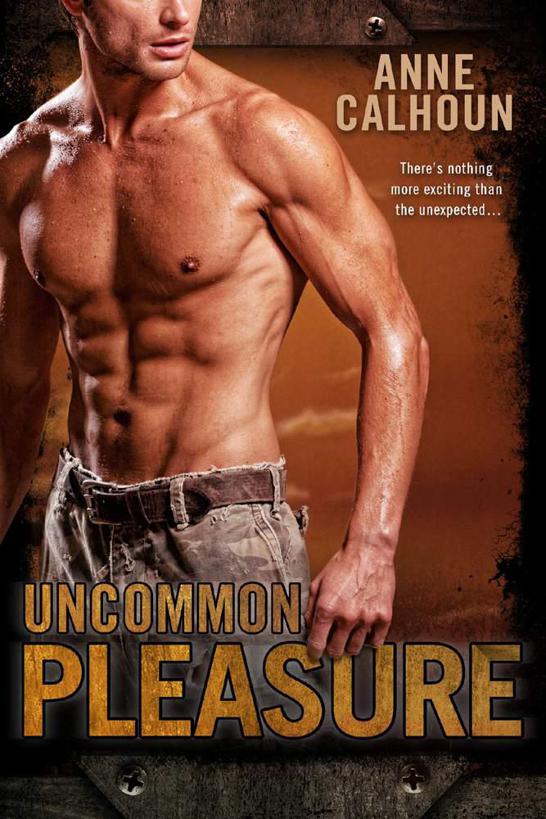 HEAT and the HEAT design are trademarks of Penguin Group (USA) Inc.

For HelenKay Dimon.
As always, for Mark.

I’m forever indebted to HelenKay Dimon, whose kindness and friendship at a pivotal moment in my career resulted in the kind of good fortune I can only pay forward. Similarly, this book would not be in readers’ hands without the diligent efforts of Laura Bradford and Leis Pederson, and I thank you both. Robin Rotham, B, Jill Shalvis, and Alison Kent provided crucial support and encouragement. Going above and beyond, Alison helped me correctly plate a car in Galveston County, while Walt Stone provided insights into a petroleum geologist’s work; any errors are mine. Finally, thanks to Kristi, who said Sean would drink Shiner Bock, and has been along for the ride since the beginning.

All on the Line

As the engine wound down the helicopter’s rotors lost speed
, slowly thwapping at air saturated with late afternoon sunshine and humidity. Braced against the trunk of her car, Lauren Kincaid watched Ty Hendricks emerge from the helicopter. Acknowledging that he’d set off a purely physical response in her body wasn’t enough. She wanted to know why.

It could have been his hair—blond, too long, finger combed back from his face—or perhaps his eyes—dark chocolate, with spiky blond lashes. It could have been his square jaw, or the broad shoulders straining at the seams of a plain gray T-shirt as he spoke a few words to the chopper pilot, then hoisted his duffel over his shoulder and crossed the helipad.

But it wasn’t any of those things.

It was the way he walked, utter confidence in his long-legged, loose stride as he cleared the helipad and set off down the aisle between two rows of cars and trucks left by Gulf Independent Petroleum employees working offshore. He inhabited his body as
if it existed only to accomplish what he set his mind to, nothing more. He didn’t dress it or accessorize it or sculpt it. He used it—hands, arms, hips, legs—and based on the torque he applied to a wrench the length of her arm to work loose a recalcitrant bolt, she had no doubt he could be unspeakably brutal if he chose.

His jeans were faded to pale sky blue and worn white at the seams from years of keeping him decent, nothing more. The T-shirt lacked ads for microbreweries or sports teams or Jesus, no funny slogans. He’d tucked it in, hooked his phone and Leatherman on a worn brown leather belt fastened with a dented silver buckle. She’d spent a lot of years in the company of men, from gruff, gravel-voiced career NCOs to PhDs who hadn’t seen daylight since Bush was president. She could tell a man’s man from a ladies’ man, knew within seconds when a guy puffed up like a rooster to hide insecurities and when an insecure front hid a sweetheart of a guy.

Ty Hendricks was no sweetheart. He’d been offshore for thirty days, and pent-up need simmered in his industrial-strength body. Lauren hadn’t felt a man’s body, hard and demanding and maybe even brutal, against hers in a very long time. Illicit desire, long-suppressed and therefore all the more potent and volatile, zinged through all the right places.

He crossed the lot, his worn brown laced-up engineer’s boots crunching gravel underfoot, and paused by the back of a crew-cab pickup to swing his duffel into the bed and head home. He had his key in the door lock before he paused, bent his head in something that looked suspiciously like resignation, then cut her a look with those melting eyes.

She’d spent four days on an oil rig with Ty. A development geologist for Gulf Independent, her two-day trip to log the hole the drilling crew just finished drilling coincided with the end of Ty’s thirty-day shift. Two bridges to clear before she could log the hole turned forty-eight hours offshore into ninety-six and gave them
plenty of time together. She’d caught him watching her with those shadowed eyes often enough.

Her Lexus IS 250 had four thousand miles on it, and if the battery had died, the dealership was going to get an earful. “Nothing’s wrong with my car. Would you like to have dinner with me tonight?”

The T-shirt strained over his shoulders as he braced his elbows on the side of the truck’s bed and let his hands dangle. There was no glint of gold on his ring finger, but that didn’t mean much. Wearing any jewelry was dangerous on a rig.

“Yes. Dinner,” she said with a small smile. “After four days of gray mystery meat and iceberg lettuce I’d kill for a decent salad.”

A breeze off the Gulf tossed his hair in his eyes, but he didn’t move. “You don’t want to have dinner with me.”

She lifted both hands to tuck a fluttering strand into the heavy knot at her nape, watched his gaze flick to her breasts, sparking a hot, tight clench low in her belly. “Actually, I do.”

He straightened, put on a pair of wraparound shades that hid his eyes. “No, you don’t.”

That wasn’t
I’m in a relationship
, or
I’m seeing someone
, or
I have plans already
, and his blunt statement raised her hackles. She’d grown up having the circumstances of her life—frequent moves in the middle of the school year, making friends only to leave them months later, the only place that felt like home her grandparents’ farms in Kansas—dictated by her father’s meteoric rise to general in the United States Army. Once she was in charge of her life, it was a point of pride to know what she wanted, why she wanted it, and then go after it.

“Fall’s coming,” she said, glancing up at the faded blue sky. “This is one of the last warm nights we’ll have for a while. I’m going to go home, shave my legs, and put on a dress, then I’m going to
McGuigans. They have a bar on the patio and a Thai chicken salad I like. That’s where I’ll be around seven if you feel like eating something at the same time I’m going to eat something.” She was interested, not desperate, so she clicked open the locks on her Lexus and pushed away from the trunk. “Trust me, Ty. I know exactly what I want.”