Uncovering Secrets: The Third Novel in the Rosemont Series 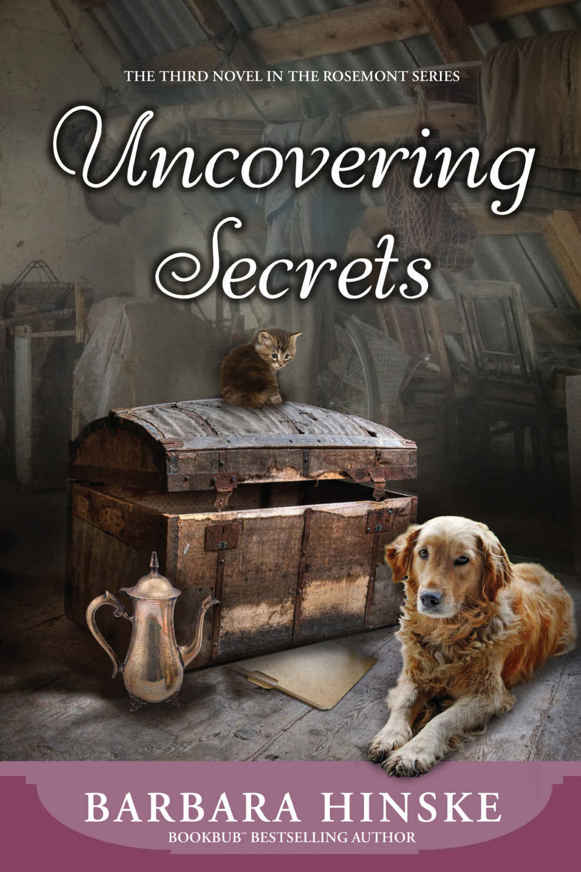 This
book may not be reproduced in whole or in part without written permission of
the author, with the exception of brief quotations within book reviews or
articles. This book is a work of fiction. Any resemblance to actual persons,
living or dead, or places or events is coincidental.

Coming
to Rosemont
, the first book in the
Rosemont
series

Weaving
the Strands
, the second book in the
Rosemont
series

Available at
Amazon and for Kindle.

I’d
love to hear from you! Connect with me online:

Visit
www.barbarahinske.com
and sign
up for my
newsletter
to receive
your Free Gift, plus Inside Scoops, Amazing Offers, Bedtime Stories &
Inspirations from Home.

Search
for
Barbara
Hinske on YouTube
for tours inside my own historic home plus tips and
tricks for busy women!

Find
photos of fictional Rosemont, Westbury, and things related to the Rosemont
series at
Pinterest.com/BarbaraHinske
.

To
Helen Curl, Jeffrie Story, and my Brian—you are the wind beneath my
wings.

Other Books in the Rosemont Series

Connect with the Author Online

Maggie Martin snapped her laptop shut and set it on the
coffee table. She’d been reviewing spreadsheets for hours. The formidable
financial problems facing Westbury would still be there tomorrow. It was New
Year’s Day, after all, and Westbury’s hard-working mayor deserved some time
off. She’d worked every day since she’d taken office last spring. She stretched
and slid over on the sofa to snuggle her fiancé of almost twenty-four hours,
John Allen.

John
put his arm around her and hugged her, his eyes glued to the college bowl game
on television. “Only two minutes left,” he mumbled. “Then we can …”

Maggie
interrupted him. “And there’s another game right after this one. Enjoy. I know
you’re reliving your glory days on the gridiron. I’m going to let the dogs out
and call Susan and Mike. I have big news, you know.”

John
smiled and patted her arm.

Maggie
summoned Eve and Roman, tucked her chestnut bob into the collar of her down
jacket, and wound a scarf around her neck. She picked up her cell phone and
headed to the back garden. The dogs raced ahead of her as she sought protection
from the icy wind under a pine tree on the lawn and tightened the scarf around
her neck. She’d lived in Southern California most of her adult life, and these
Midwestern winters were not easy to get used to.

She
turned to study the edifice of Rosemont. The warm tones of its stone walls and
the symmetry of the mullioned windows elicited the same visceral response in
her as the first time she saw it. Rosemont embodied stability, order, and
security—exactly what she was looking for when she moved here to restart
her life after her husband Paul’s sudden death. And not at all what she’d
found. Never in a million years would she have imagined she’d be elected to
public office as a write-in candidate.

Just
yesterday, she’d been prepared to hand in her resignation as mayor. The
constant criticism of the local press and a vocal segment of the community were
demoralizing, and a lucrative assignment offered by her once trusted colleague,
Professor Lyndon Upton, seemed too good to turn down. Uncovering collusion
between Upton and local town councilman Frank Haynes had changed everything.
They weren’t going to get rid of her that easily. She would stand her ground
and do everything in her power to restore the town’s financial footing. She’d
make sure those responsible for the fraud and embezzlement that left the
general fund and the town workers’ pension plan on the brink of bankruptcy were
brought to justice. So much had changed in the last day. She pulled her phone
out of her jacket pocket and dialed Susan’s number.

“Hey,
Mom, Happy New Year!” Susan sounded cheery, as she almost always did these days
now that Aaron Scanlon had come into her life.

“Same
to you. How did you two ring in the New Year?”

“We
went to dinner at this swanky hotel that had a ten-piece orchestra, and dancing
afterward, like out of an old movie—so glamorous.”

Maggie
smiled. “What did you wear?”

“That
long, slinky midnight-blue dress with the slit. Remember? We found it on
clearance, and you insisted I buy it. You promised I’d have a chance to wear
it. You were right, Mom.”

“What
was that again? You’re breaking up—I can’t quite hear you.”

“You
heard me, Mom. But if you want to hear it again—you were
so
right.”

Maggie
laughed. “The words every mother loves to hear.”

“How
about you? Did you and John do anything special?”

“Did
you turn in your resignation?”

“Turned
it in and went back and tore it up.”

“So
you’re not going to take the expert witness gig that Professor Upton offered
you? You won’t be traveling to California all the time and coming to visit us?”
Maggie could hear the disappointment in her daughter’s voice.

“No,
honey, I’m sorry. It’s a long story. I suspect Frank Haynes and Don Upton have
been working together to convince me to resign.”

“Why
do you think that?”

“I
saw a text message from Don on Frank’s phone—congratulating him on my
resignation.”

“I
ran into Frank—literally—on the steps of Town Hall after I turned
in my resignation yesterday. I slipped on the ice, and my purse went flying
down the steps. When Frank helped me pick everything up, I grabbed his phone by
mistake.”

“When
did you see the text?”

“Later
that afternoon—when John and I were sitting in a movie. The phone started
beeping. I scrambled through my purse to find it, and that’s when I saw the
message.”

“Why
would Councilman Haynes and Professor Upton conspire against you? It doesn’t
make sense.”

“I
agree. I don’t know, but there’s something more between the two of them.”

“John
and I sat in the lobby of the movie theater and talked it out. The more we
talked, the madder I got. One thing is certain: I am not going to let them
orchestrate my resignation.”

“What
does John think about all this?”

“He’s
in total agreement. He drove me to Town Hall, so I could take back my
resignation letter. We burned it in the fireplace at Rosemont.”

“What
are you thinking, honey?”

“You
did the only thing you could do, Mom. It all sounds very fishy. I’m
disappointed you won’t be here on a regular basis, but I’m behind you one
hundred percent, and Mike will be as well.”

“Thank
you, honey. I’m really sorry I won’t be seeing you guys more often. Plus the
money would have been nice.”

“It
wasn’t all bad …” Maggie paused, unsure how her daughter would take the news of
her engagement. Both of her children got along famously with John, but changing
status from boyfriend to husband might be another matter entirely. “John
proposed. And I accepted.”

Susan
squealed. “Mom! That’s fantastic news! Mike and I were both hoping the two of
you would get married. I was devastated when you broke up last year. You belong
together.”

“Thank
you, honey. Your blessing means the world to us.”

“Mike
will be thrilled.” Susan drew a deep breath. “We need to get going on the
wedding.”

“We
haven’t made any firm plans yet. It’ll be a small affair, here at Rosemont. I’d
like to get married in the garden,” Maggie said, looking over the now empty
flowerbeds. “Maybe June? We wanted to check with you and Mike to see when it
would be convenient for you.”

“I’ve
got a trial that ends in April, so June is fine with me. The whole town will
want to be there, with you being mayor and John a hometown boy and the local
vet.”

“That’s
why we’re going to keep this really quiet. We don’t want a massive affair.”

“You
can have a big wedding at Rosemont or anywhere you choose. John and I don’t
want that.”

“Come
on, Mom. You love to throw a party. You and Dad got married at the courthouse,
and you didn’t even have a new dress. This has to be a grand affair. The back
garden would be lovely, but outdoor weddings can be tricky. Why not get married
inside Rosemont? The place looks like a movie set from an English period drama.
A gorgeous stone manor home—it’s a perfect wedding venue. You could be in
front of the fireplace in the library, or in the living room. We could all
sweep down that staircase.” Susan sighed. “And you have to wear a wedding
gown.”

“Honey,
I’m too old for a wedding gown, don’t you think? Won’t I look ridiculous? I was
thinking of getting a really nice evening suit. Then I could wear it again.”

Susan
snorted. “Get yourself an evening suit if you want one, but you’re not getting
married in it.

“I’m
logging into Pinterest right now. I’ll create boards for your dress, the food,
and the flowers. What does your ring look like?”

“What?
You’ve got to have a ring, Mom. You love jewelry. I’m starting a board for your
ring, too.”

Maggie
laughed. “Slow down, princess. All in good time.”

“Check
my Pinterest page tonight—I’ll have gobs of pins by then.”

“I
will. And I’m grateful for your enthusiasm. You get busy with Pinterest. I’m
standing outside and am frozen stiff. I need to round up the dogs and head
inside.”

“Give
John a big hug from me. Love you both.”

Maggie
opened the back door, and Eve darted inside to her warm basket in the corner of
the kitchen.

“Where’s
Roman?” Maggie asked as her beloved terrier mix nestled into her blanket.
Maggie leaned out the back door and whistled, pausing to listen for the
familiar sound of Roman’s tags jingling on his collar as he ran up the hill.
The only sound was the wind rustling through the branches.

Roman
must have found a dead bird or some other treasure at the bottom of the vast
lawn; she’d have to go back into the blustery afternoon and bring him inside.
She trudged down the hill, alternatively whistling and calling Roman’s name,
becoming more concerned with each step. She’d never known John’s Golden
Retriever to disobey a command. By the time she reached the thin strip of woods
at the bottom of the hill, Maggie knew he was gone. She raced up the hill and
burst into the library of Rosemont.

She
bent over, thoroughly winded, and gulped air. “Roman got out. He’s not in the
garden.”

John
leapt to his feet. “It’s not like him to run away,” he said, rushing past her
to the back door, not stopping for his coat. Maggie followed in his wake.