Under Wraps: An Urban Fantasy Adventure (Werewolves vs. Mummies Book 1) 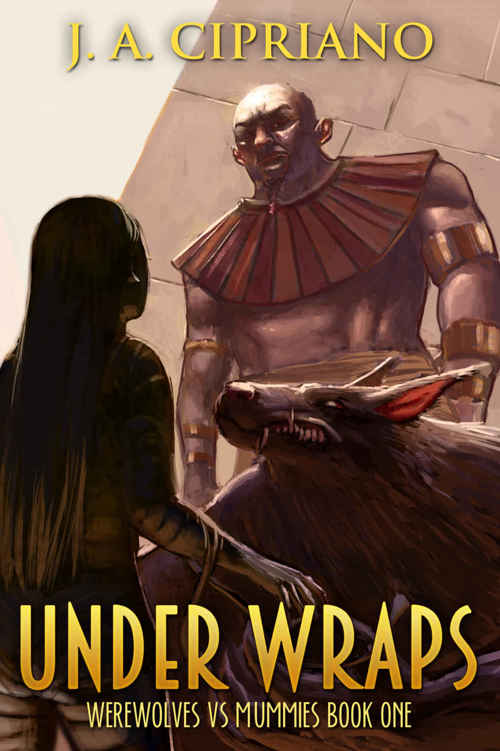 Want to get this Free?

Sign up here
. If you do, I'll send you my short story,
Alone in the Dark
, for free.

Visit my blog at
JACipriano.com
for all the latest updates.

Burning. My skin was burning.

I opened my eyes.

I tried to turn, to roll away, but I couldn’t move. Not well. Not quickly.

I swallowed… tried to swallow.

I raised one hand, trying to blot out the sun. Pain shot through me, gnawing at my flesh like a thousand fire ants.

It was bright… so bright.

I stared at the sky through my splayed fingers, eyes squinted nearly shut.

My mouth was dry… so dry. I tried to lick my lips, but my tongue stuck to them. The taste of blood filled my mouth. Sour and metallic like dirty nickels.

Bile rumbled upward, raging up my throat like a river. I rolled, somehow, someway.

Vomit splattered across the sand. The hot, burning sand.

My stomach hurt, muscles clenching so hard it choked off the breath from my body.

Sand. So much sand. I put my forehead against the white sand and lay there unmoving.

The sun beat at my back, scorching and relentless. I could feel it scalding my flesh. I shut my eyes, trying to figure out where I was.

I was an Orange County guy. I was used to the sun, to the heat, to the sand. But not like this, not the relentless burning of this sun, this sand. So hot I could feel my skin baking.

I opened my eyes and stared down at the sand. Where was I? I looked around, but there was nothing but sand. I shut my eyes.

I opened them again.

Nothing but sand. Endless sand.

I shut my eyes and concentrated. Was I dreaming? Was I dead?

No… No it hurt too much to be dead, to be dreaming. So where was I?

The last thing I remembered…

What was the last thing I remembered?

Flashes of light? The flaring in my brain like a lens on a badly taken photograph. Hot and distilled down to a pinprick.

I sat up on my knees and ran my hand over the spot on the right side of my chest. It was fine, good as new. The skin puckered a raw pink color. Had it healed? How had it healed?

I reached down, feeling my body for injury, but the only pain was a strange stiffness, a tense ache, like a cramp all over my body.

I stood up. Naked in the unrelenting sun and stared at the sky.

I remembered. I remembered the mummy. The mummy, Khufu. He had risen, had attacked us.

An explosion throwing me backward. Statues crumbling. The tomb caving in.

I stared at my hand. I remembered breaking it. Could feel the rocks falling on top of me, crushing my bones.

I took a step forward, my bare feet padding on the super-heated sand.

I gripped my head.

Visions of a fictional bear crossed my brain, sparking something. Blonde.

There had been a girl. Not blonde. Dark-haired.

I swallowed with my dry throat and licked my cracked lips. They tasted like blood.

My sister. My sister would be worried.

She didn’t know I’d been trapped in the Egyptian tomb.

Why had I been in that tomb? I remember…

To find something important.

The mummy had risen. Khufu. Khufu the evil pharaoh. The one who built the pyramid of Giza.

Was that where I was? Was I in Egypt? Was I four thousand years in the past?

I took another step. My legs gave out. Too weak.

Thirsty. I was so thirsty.

I got to my feet.

Why was I here? What had I come for?

That’s right. I had come for a soul.

It had been sent back. Trapped. Lost in time.

I needed to find his soul.

I needed to find it and bring it back.

Back to my time.

Only Khufu knew where it was. Khufu the mummy.

The one who had sent us back.

I had wanted to be sent back.

I stood again and took a few steps.

My mouth was dry. So very dry.

The sand was hot.

The sun was burning me.

The heat beat at my back.

Broken sarcophagi filled the dunes for what seemed like miles. Footprints trailed off in every direction as I rubbed my face.

I got to my feet, slowly checking myself for injury, but thankfully, everything seemed to be there. Hell, I didn’t even have a sunburn, which was a little odd considering I’d woken up naked in the middle of an Egyptian desert. That should have done a number on my supple flesh… but it hadn’t.

I remembered being trapped in an Egyptian tomb as the mummy of Khufu, Egypt’s most notorious Pharaoh, rose. I could still feel his fingers around my throat as he demanded to be sent back to when he’d constructed the pyramid of Giza. Yeah, that’s right. He was the one who built one of the seven wonders of the world … and I’d awakened him. That’s when the tomb had exploded. The last thing I saw was blinding blue light.

In the distance, the great pyramid of Giza was under construction. So he’d succeeded in bringing us back. Great. I was trapped in Ancient Egypt, and I didn’t even have my clothing. Great. Swell. Fantastic.

See, I was born in the twenty-first century, and well, let’s just say that
when
I came from, the pyramid of Giza had been well and truly built for over four thousand years. Seeing it being constructed was enough to make the hair on the back of my neck stand up straight and make a bad feeling swell in my gut. What if I was trapped here forever? What if I couldn’t get back home? I perished the thought. It was a dark thought, and it lingered.

“You’re awake,” a soft sing-songy voice that reminded me of a Disney princess filled my ears.

I whirled to see Aziza, the mummy princess I’d accidently awakened along with Khufu. She was sitting on a golden coffin, her chin cradled in her hands as she watched me. The sunlight glittered off her ebony hair as she pursed her perfect lips. My heart sped up in my chest as I stared at her. She wasn’t wearing her wrappings anymore. When I’d seen her before, she’d been bound from the neck down in millennia-old yellowed linen.

Now though… now she was wearing a
thin
blue dress that clung to her body in such a way that just looking at her made my heart palpitate. I mean, I’ve talked to pretty girls before, so I was pretty sure it wasn’t just that. Still, she wasn’t just pretty. She was, how can I say this? Really, really hot. Like one of those models on the cover of swimsuit editions, only more natural.

“Yeah,” I replied, smiling at her as best I could, but I was pretty sure I just wound up looking like a goofball. “Was I out a long time?”

“Yes,” she replied, sweeping her hand over the horizon and gesturing at the sarcophagi littering the sand. “Long enough for many of the mummies that had been locked away in Hades’ vault to escape. I stopped those I could.”

I swallowed, staring at the literally hundreds of gilded coffins littering the dunes. “You stopped all those mummies? How long was I out? A week?”

“I stopped some of them.” She shot me an amused smile. “You were out a while, but fortunately, so were many of them. Capturing them was less impressive than you’d think.”

“And there are more?” I asked, finding it hard to believe.

“Yes, many more. The most powerful awakened first. They escaped before I arrived to take care of them.” Her smile faded, and she wrung out her hands. “Khufu escaped. I was not able to capture him.”

“That seems bad,” I replied, a horrible feeling settling in my stomach. That aforementioned tomb I’d been exploring had been inside Hades itself. Yeah, that’s right. The actual Greek underworld. Apparently Hades and Osiris, the ruler of the Egyptian underworld, had done a prisoner exchange. They’d decided that some of Egypt’s most dangerous would be weaker if they were kept in the Greek underworld.

So what had I done? Destroyed Hades jail and released everyone. Now there were literally thousands of mummies roaming free, and not just any mummies. I’d had to go and release the most dangerous mummies of all time from the preternatural version of Alcatraz when I’d tried to awaken Khufu. It wasn’t one of my better moments. So why had I done it? I needed to save my friend’s soul, and to make a long story short, it had been taken back to Ancient Egypt by an evil magician.

The only person who could get us back here was Khufu, and he had been stored in Hades dungeon. Ipso facto, I had released him and everyone else. But everyone else had been an accident.

“It is bad. Exceedingly bad. Khufu is probably the most powerful mummy ever created, and unfortunately, he’s quite wily too,” Aziza said, worry filling her amethyst eyes as she stood and walked over to me. “You don’t even understand how bad it is that he has escaped. But thankfully, you’re awake now. You must help me recapture him and everyone else.”

“Recapture them? I don’t even know how to go about doing that,” I replied, running my hand through my hair. “The only thing I came here to do is find my friend’s soul and get the hell out of here.”

She poked me hard in the chest. “Stop being all wishy washy and help me capture some mummies.” She fixed me with a glare that made me feel very small.

“But—” I said, and was about to say something really good when she cut me off.

“Thes Mercer, are you trying to shirk your duties?” Aziza put her hands on her hips like a crabby princess. “You let them out. You must put them all back. Those are the basic rules of adventuring.”

“Um… no. The basic rules of adventuring are ‘don’t get trapped in ancient Egypt with a horde of newly awakened mummies.’” I grinned, turning and staring out at the huge pyramid in the distance.

“Well you failed that, already,” she replied, fixing me with a stare that could melt plastic. “Besides, Khufu knows where your friend’s soul is. If we find him, we’ll find the soul.”

“Okay, so where do I find Khufu?” I asked, resisting the urge to squirm away. I succeeded. Mostly.

“You can’t find him, but I can. And I won’t do it unless you help me recapture
all
the mummies. Deal?” She held out her hand, like she wanted to shake hands with me.

“No deal, Aziza. I need to find my friend’s soul before something bad happens to it. I don’t have time to capture random mummies.” I crossed my arms over my chest and tried to glare her down. “Tell me where Khufu is.”

“No.” Aziza spun on her heel and began walking away, leaving me alone in the dunes amid a sea of silent coffins.

Rage filled me. Was she being serious right now? Was she seriously going to walk away and leave me alone in the desert? I sprinted after her, grabbing her by the shoulders and spinning her around. Her face was completely impassive as she stared at me, amethyst eyes completely empty. It reminded me of looking into the eyes of a snake.