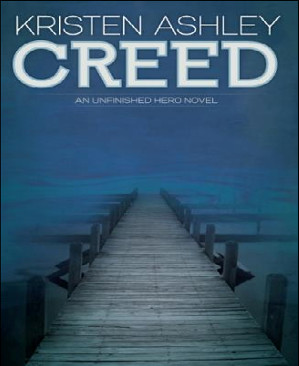 Published by Kristen Ashley at Smashwords

This eBook is licensed for your personal enjoyment only. This eBook may not be re-sold or given away to other people. If you would like to share this book with another person, please purchase an additional copy for each person. If you’re reading this book and did not purchase it, or it was not purchased for your use only, then please return to Smashwords.com and purchase your own copy. Thank you for respecting the hard work of this author.

This series was meant to explore anti-heroes, or men who are not your traditional hero. In other words, they do bad things, break the law and live by their own code which is not the normally acceptable code by which most of society lives.

When they came to me, the characters in this book threw me for a loop. Instead of an anti-hero, I got an interrupted hero and an anti-heroine. My Creed may skirt the law but Sylvie breaks it and makes no apologies for it.

Therefore, Sylvie is not soft, sweet, giggly or flirty. She is also not sassy. Sylvie is badass, kickass and makes no excuses. Life has led her to develop a hard shell with sharp edges in order to keep distant and protect herself from life’s hurts but when she lets someone through… watch out. It’s a love like no other.

I adore her so much, no kidding, I wanted to switch gears while writing this and call this book
Sylvie.
Alas, Creed came through just as strong and the beauty of his connection with and adoration of Sylvie wouldn’t allow me to make that change.

That said, this is your warning that my Sylvie is not your usual romance novel heroine. She’s one of the boys. She is, in a sense, like the female version of all my alphas from my novels all the way down to the language she uses.

I hope you give her a chance and, if you do, I hope she’ll have you eating out of her hand.

Last but oh so not least, I want to thank my posse who again had my back in a lot of ways near and dear to my heart while I wrote this novel.

You know who you are and you know all you’ve done.

To the moon and back, girlies.

For my readers, here you go…

Creed
and his Sylvie.

Games of the Heart

Until the Sun Falls from the Sky

I drove fast because she sounded tweaked.

Tweaked in her business was not good.

Tweaked in my business was not good either.

If Knight knew something bad was going down, he’d lose his mind which meant someone might lose the use of an appendage. She knew, if I hit the scene, I’d have a mind to carpet stains.

I screeched to a halt on the road outside her house in my blue 1968 Corvette Stingray then reversed, parallel parking expertly between two cars. In a second, I was out, hand to the gun under my leather jacket shoved in the holster attached to my belt at the small of my back. I shoved my keys in my pocket and approached the front door of her tiny house, my eyes peeled and scanning.

No noises, no sound.

It was late, after three in the morning. Her neighborhood was quiet. It was a nice neighborhood, not flashy, not family. Just a neighborhood if a bit rundown.

I hadn’t run Serena’s check. Another of Knight’s team did it. I didn’t know much about her, though I’d taken her to a few of her early appointments and stuck around until they were over. This was a service Knight provided to his new girls. Strike that, it was a service Knight insisted his girls have.

I pulled up what I knew about her and remembered she was an art student, earning cash to go to some fancy school in France. Parents gone, a car crash. If she wanted it, she had to do it on her own.

Fucking whacked, that shit. Sure, you couldn’t pull together money to buy a plane ticket, pay tuition and living expenses in a different country by waiting tables unless you had a decade to do it.

Each girl had their own story. Most of them were way worse than Serena’s.

Which meant Serena might not be all there upstairs.

Please God,
I thought,
do not let this bitch be seeing clients at her house.

I checked in the window first, seeing light coming around the blinds but they were closed. I couldn’t get a lock on what was happening inside.

I moved to the door, stood to its side, reached out a hand and knocked hard twice.

I heard the locks open immediately.

Shit, she was waiting at the door.

It was thrown open and I saw her.

I heard the blood roaring in my ears and didn’t move except to speak.

Then she whispered, “Sylvie –”

I cut her off, “You report this to Knight?”

“You call someone other than me to help you out? Get you cleaned up?” I pressed on.

Good. Cher. That bitch was smart, had her shit tight. She’d see to Serena.

I nodded again then, “Tell me you didn’t see him here.”

She shook her head. “Never.”

At least there was that.

I studied her, not getting it.

She’d been worked over, eye swelling, lip fat and busted open but only a small tear. It didn’t look like she needed stitches. It looked like it hurt like hell but it wasn’t that bad. Unacceptable but not that bad.

Why didn’t she call Knight? For this, Knight would make a statement then cut the asshole off, he wouldn’t lose his mind.

She had to be lying.

“Serena, you gotta talk to me,” I pushed. “Why’d you call me direct? Why haven’t you reported this to Knight?”

“The girls say he gets angry,” she replied.

That was the God’s honest truth.

“Uh… just sayin’, Serena, some asshole worked you over. He’s a new client. You wanna tell me why you’re protecting him from Knight?”

“I don’t want Knight to get in trouble.”

God. Serena was relatively new. This had never happened to her.

“That is not yours to worry about,” I educated her.

I leaned into the door and dropped my voice. “Serena, babe, it’s not yours to worry about. It’s what he does. It’s who he is. That’s why you’re with him. If someone works you over, you report it to Knight. Immediately.”

She held my eyes for a beat then nodded.

I nodded. “Where, when, how long you been home?”

She gave me the details.

I nodded again. “I’m paying him a visit, Serena, and I’m reporting this to Knight.”

She bit her fat lip on the side where it wasn’t as fat, then she stopped doing that and nodded back.

“How long before Cher gets here?” I asked.

I gave her another nod.

“Ice,” I whispered, dipping my head toward her face. “Take some painkillers. Lie down.”

She nodded again then whispered back, “Thanks, Sylvie.”

I caught her eyes and locked my gaze with hers. “Anytime. Know it, babe.”

She nodded yet again.

I looked meaningfully at the door, she closed it and I didn’t move until I heard it lock.

Then I moved quickly to the car but I didn’t jog. I didn’t run. I kept it controlled.

When I got in my car, I called Rhash, Knight’s right hand man.

“Yo right back at ‘cha,” I replied. “Got good news and bad news. Which do you want first?”

“Good,” Rhash replied, a tremor of humor in his voice.

“Right, I’m in an ass-kicking mood and I’m already in my car so there are no delays in going out to kick ass.”

“Serena got worked over and she called me.”

“She says not bad. Just beat up. Cher is coming to look after her. I need an address on her client tonight.”

I waited for him to find it, he gave it to me and I programmed it into my GPS then he asked, “There a reason she didn’t call me or Knight?”

“Worried you’d lose your minds, get in trouble.”

“Stupid,” he muttered, sounding more than a little annoyed. “What’s she think we get that ten percent for?”

This was a good question and one I didn’t have an answer to. In my experience, ladies of the evening didn’t protect their protectors. If they were lucky, it was the other way around. They usually avoided them, if they could, or sought them out for not so good reasons, such as getting their fix.

Knight’s girls weren’t like that. I knew why, hell, I definitely knew why.

It still was stupid.

“Got an ass to kick, Rhash,” I reminded him.

That was why Knight inspired loyalty in his girls. Because he employed people like Rhashan and me who gave a shit.

“It’ll take me about ten, fifteen. Wait for me. I don’t want to miss anything.”

I grinned again. Rhashan and all the guys thought it was hilarious to watch me work. This was because I was five foot two and cheated the gods by drinking a lot and eating whatever I wanted and still, I was thin. I had tits and nicely rounded ass. Neither in overabundance so, no doubt about it, I was slender. I wasn’t girlie but I wore my honey blonde hair long and wild and I also had a not to be messed with, once a week schedule of getting a manicure and pedicure.

Still, I could take down a man over a foot taller than me, with over a hundred pounds on me and have him whining like a baby.