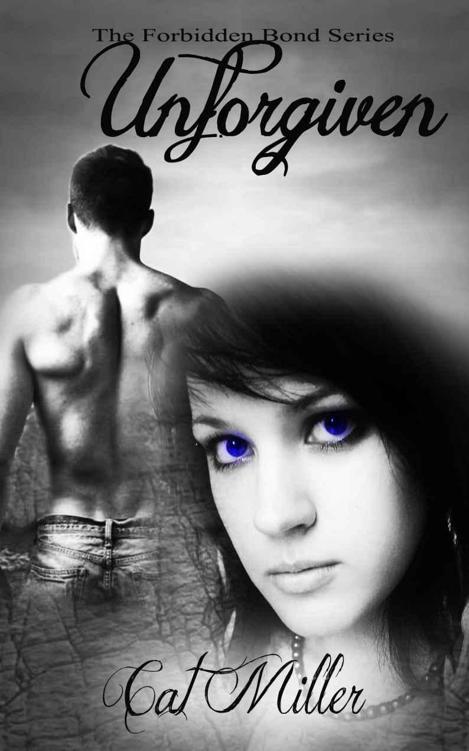 All rights reserved. Except for use in any reviews, the reproduced or utilization of this work in whole or in part in any form is forbidden without prior written permission of this author.

This is a work of fiction. Names, characters, places, and events are either the product of the author’s imagination or are used fictitiously, and any resemblance to actual persons, living or dead, business establishments, events or locales is entirely coincidental.

WHAT PEOPLE ARE SAYING ABOUT THE FORBIDDEN BOND SERIES

“Cat Miller breaks all the stereotypes of fantasy, fiction, love, lust, and vampires to bring you a story that has never been told, but MUST be read!”—
Tyra Coil, Book Snobs

“The Forbidden Bond Series is addictive from the first bite!”—
Delphina Miyares , Delphina Reads Too Much

“Cat Miller awakens intrigue and reaffirms herself as an impeccably seamless author. She effortlessly creates a world I feel right at home in. I am completely bound to her Forbidden Bond Series”—
Mary Hensley, A Page Away

“If you thought Unbound was hot just wait until you’re Unforgiven!”—
K.B. Miller, Author of
The Moon Coven Series.

“Amazing, heart pounding ride that will leave you on the edge of you seat…”—
Sabrina Ford, Paranormal Reads

My heartfelt gratitude goes out to Kathy Ambrose for her patience and never ending encouragement.

I send many thanks to Liz and Bruce LeBrun for their creative support.

I will never be able to sufficiently express my most humble appreciation to my dear friend K.B. Miller. Her strength and knowledge as a writer inspire me to new heights.

As always, I send all of my love to JR, Dani, and Sam.

In order for there to be a rebirth, something in you must die. If part of you died, would you miss it? Would anyone else miss that part of you? Would they even notice it was gone? What if you were always the shadow in the corner of a room full of beautiful, bright beings and one day you stepped out into the light? Would anyone see you, or would the shadows follow the less brilliant beings into the light? Brandi was about to find the answers to these questions.

She admired herself in the wall mirror in her huge walk-in closet. There were piles of clothes littering the floor around her, ready for the Salvation Army. All the clothes hanging from the racks still wore their tags and her trendy new shoes were still all in their boxes. She’d been planning this transformation for months and today would be the big reveal. Of course, at first everyone would think that she had simply dolled up for her newly found half-sister’s bonding to Chase Deidrick, Brandi’s secret childhood crush. No one knew that Brandi had always had the hots for Chase. She’d watched him in the halls at school and drooled just like the rest of the girls, but Brandi had the added benefit of seeing him regularly at vamp functions and at the Council hall.

It had broken her heart the day she caught her twin sister, Samantha, having sex with Chase in the pool house. Brandi couldn’t possibly have looked any less like her twin, even if she had tried. Samantha was beautiful, tall, model thin and blonde. At the time, Brandi hadn’t grown into a womanly form. She was a head shorter than Samantha and she had the same dark chocolate hair that seemed to run in the Vaughn family. Most days she looked like a nerdy tomboy. Brandi enjoyed sports and took great pride in getting straight A’s in her advanced gifted and talented classes.

Oh, Samantha was just as smart as Brandi. They both graduated from high school at sixteen years old, but Samantha preferred to derive attention from her pretty face and flawless figure. The boys had always fawned over her and competed for her attention. She did a lot of dating, but Samantha only wanted the one guy that paid her no attention. Chase Deidrick.

Brandi figured it was the challenge that drew Samantha to Chase. She enjoyed the hunt more than the prize. Samantha wanted the prize to be hers and hers alone, at least until she became bored and tossed the guy aside like so much garbage. Who knew, if Brandi had developed early, the way Samantha had, she could have been the same way. She wouldn’t have needed to compete with Samantha for their mother’s attention in the only way she knew, with her brain. Intelligence was the only attribute Brandi exuded that her sister didn’t bother to flaunt.

Brandi had gotten home from a trigonometry study session on a particularly hot day at the end of her senior year of high school and decided to jump in the pool for the first time that season. She entered the pool house and was surprised to hear water running and voices coming from one of the shower stalls. She recognized her sister’s hushed moans and went to investigate. Brandi thought it would be hysterical to catch her sister with the pool boy she’d been ogling, or a gardener. Who else would be around for her to dally with? Brandi would never let Samantha live it down.

He wasn’t the pool boy. The shower curtain was open about an inch and Brandi could clearly see the side of Chase’s beautiful face; his muscular, water slicked body sliding against Samantha’s Barbie perfection. They were getting it on and Brandi wanted to die. She could never compete with her sister. It was the end of her childish fantasies of a future with Chase Deidrick. Brandi quietly backed out of the pool house, leaving behind a small piece of her heart, and much of the closeness she shared with her twin. Things had never been the same between them after that day.

Their already shaky relationship had taken a nose dive when Brandi had done a little underhanded maneuvering nine months ago to prevent her sister from trapping Chase into a blood bond he didn’t want and she didn’t deserve. Their parents and Chase’s parents were determined to fulfill a prophecy and bring about peace between their families. The prophecy also promised the end of the hellish reign of a rogue vampire who continued to slaughter the youth of the vampire nation in his sickening bid for power. In order to achieve this feat Chase had to take one of them for his mate. The choice was his but Samantha had done everything in her power to ensure he choose her, even going to the lengths of turning Chase’s best friend, Cayden, against him and lying to Brandi about her relationship with Chase.

Brandi didn’t want Chase. Not really. Seeing him have sex with Samantha had shattered all of her childish longings for him. And to be honest she didn’t believe the plot to force a prophecy into fruition was going to work. Things happen when they were supposed to and it was arrogant of the Elders to believe they had the power to make it happen otherwise. When Brandi realized her sister was about to close the noose around Chase, she acted swiftly and without thinking. She exposed Samantha’s scheme to everyone who needed to know without a thought for how it would affect her. Brandi had been a bit hysterical when her father proclaimed that she would be mated to Chase instead of Samantha. In her effort to free Chase, she had neatly entrapped herself. Who would want to be mated to a man who had lain with her sister. Not to mention that he was madly in love with another girl, a girl she later learned was also her sister. What a mess she had made. But that was all over now and things had worked out as fate intended.

Looking at herself in the mirror now, several years after that awkward day in the pool house, that shy tomboy was nowhere to be found. Brandi hardly recognized herself now that she wasn’t hiding behind her frumpy yet comfy track suits and oversized jerseys. She could see the woman she’d grown into staring back at her.

Brandi was lush and curvy in a way that reminded her of her half-sister Danielle, instead of a tall, willowy creature like Samantha. She would never again envy Samantha’s looks and popularity. Brandi would do whatever it took to find a sense of self-worth and stand out in a crowd, even if it meant part of her had to die. The quiet bookish girl of her past had to step aside to make room for the woman she was now determined to be.