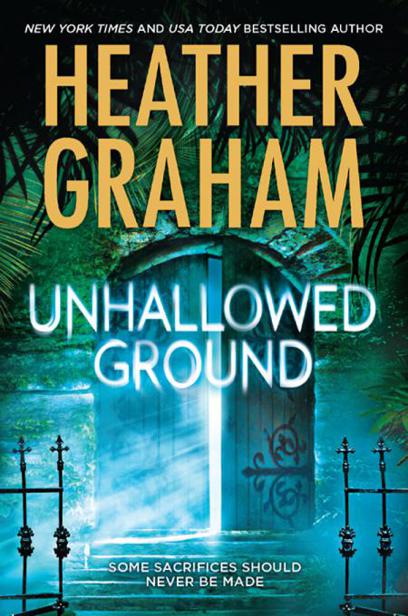 —
Kirkus Reviews
on
The Death Dealer

“[A] sinister tale sure to appeal to fans across multiple genre lines.”

—Publishers Weekly
on
The Death Dealer

“Heather Graham will keep you in suspense until the very end.”

“There are good reasons for Graham’s steady standing as a best-selling author. Here her perfect pacing keeps readers riveted as they learn fascinating tidbits of New Orleans history. The paranormal elements are integral to the unrelentingly suspenseful plot, the characters are likable, the romance convincing, and, in the wake of Hurricane Katrina, Graham’s atmospheric depiction of a lost city is especially poignant.”

—
Publishers Weekly
on
The Séance

DEAD ON THE DANCE FLOOR

To the city of St. Augustine, and especially to Derek and Pablo-the-cat and our road trip.

To the carriage and tour companies—and everyone who’s fascinated by the unique legends of our nation’s oldest European-founded city.

It’s a remarkable place to visit.

Thanks, also, to the Inn on Charlotte, Victoria House, and Casa de Suenos (where they welcomed Pablo as well as the rest of us!)

Then, during the War of Northern Aggression

S
t. Augustine, in northern Florida, was beautiful, especially by night. It was the image of everything graceful and lovely in the Deep South and, when seen by the gentle glow of the moon, as serene a place as one might ever hope to see. Spanish moss dripped from old oaks like the sweep of a gentle lace blanket, and a low ground fog swirled in a faint breeze that seemed to carry with it the whisper of a moan. The silver mist curled around the mournful beauty of the cemetery, caressing the cheeks of stone angels and cherubs standing atop newly dug graves, as well as those that had been there for centuries.

The moon that night had a haze promising rain the following day. The misty halo around the full orb cast an eerie glow over the earth, turning the cemetery into a magical vision with its praying virgins, weeping guardians and majestic display of marble statuary, all bathed in the pale and eerie light.

Two women came with a lantern, one with purpose,
and one carefully picking her way around the gravestones and funerary art.

“How much farther?” Susan Madison asked nervously as the moon slipped behind a cloud and the shadows deepened.

Martha paused to stare back at her, contempt in her eyes. “If you are afraid, there is no reason to go any farther at all.”

Well, of course, I’m afraid,
Susan longed to shout. She hadn’t been afraid before; it had all seemed like a lark, and why not? Life was a mess right now, and maybe Martha did have some kind of wonderful power to make everything better.

But now she
was
afraid. The beauty was gone from the night.

Only death seemed to remain.

Yes, she was afraid. She was walking in a shadowy graveyard by night, hearing nothing but the rustle of the leaves and the moan of the wind in the branches, and she was a fool ever to have thought that this would be an adventure.

She had convinced herself that she had to play this game, had to skirt the edge of social and moral insanity. The news in her life was always terrible, all about the war, death, advancing armies, defeats.

There was no guarantee that Thomas Smithfield would be alive in a matter of months, much less have anything left of his home, finances or wits. A love ritual might well be useless.

“We’re here? Where is here?” Susan demanded, looking around. They had passed the MacTavish mausoleum, the giant sculpted dogs that guarded the eighteenth-century entrance to the section containing the graves of children, and even the oldest and most chipped and broken stones in the cemetery. They were standing by a small broken wall, where trees grew tall and broad, breaking through the stones of the dead, and the moss dripped almost to the ground. The earth itself didn’t seem as if it belonged in any place created by man at all. It was more like a pit of churned dirt and broken pottery.

“Right here,” Martha said, pointing. Her voice dropped to a whisper, so soft that Susan could barely hear it. “We’re outside hallowed ground here. This wall—or what’s left of it—marks the boundary beyond which they buried the indigents and the…the unhallowed.”

Susan felt a sudden chill. It was summer, and even the nights could be sweltering here in the humid lowlands, with only the occasional breeze off the ocean to alleviate the wet heat. But tonight she was suddenly cold with a bone-deep sensation that came from far more than just the temperature.

Of course she was cold, she told herself. Martha was frightening her. That whisper she was using, the cemetery itself, bathed once again in the unearthly glow of shimmering moonlight filtered through haze and fog.

“You still have it? You didn’t drop the sacrifice?”

Susan told herself that the ominous tone was all part
of Martha’s act, but even so, she shuddered as she reassured herself that she still had the little vial of blood, wrapped so tightly in her hand that she had practically forgotten she was carrying it.

“You killed the creature yourself?” Martha asked.

Martha approved her answer with a solemn nod as she took the vial of blood from her. “Now the black drink.”

Martha held up a small bottle filled with an inky liquid.

Susan stared at her.

What was the matter with her?
she wondered. All her friends had gone to Martha for potions and palm readings. Martha did have a talent for knowing what was going to happen. Not only could she foretell the future, but sometimes she could also actually make things happen. And always she was an amazing show-woman.

This was an adventure, Susan told herself, and maybe—just maybe—the potion would work.

Martha was standing in front of her, smiling, looking as gentle as a kitten, as well-meaning as a doting grandmother. She pressed the small bottle into Susan’s hand and helped her lift it to her lips. The concoction was sweet, not bad tasting, but it carried an aftermath of fire that sent slivers of steel running through her blood.

Suddenly crimson darkness descended, making a stygian pit of the cemetery, a fiery globe of the moon.

“I don’t want to do this anymore,” Susan said. Her voice sounded like a whimper, appalling her. “I’m sorry, I just want to leave.”

Martha laughed, but the sound was husky and taunting, frightening her further. “Such a terrified little girl. We’re here now, you’ve had the black drink, the worst is over. It’s time.”

The darkness lifted, and once again Susan found herself standing in the moonlight in the old cemetery she had walked through dozens of times before. There was nothing dark or terrifying or eerie about it; it was just a field of the dead.

And still, she wished she had never come.

But she didn’t want to run away and leave Martha to tell the tale of her cowardice. It would be mortifying if everyone knew what a silly coward she had been. The things that were said about her already were bad enough.

But what were her choices.

Stay and dig up a grave? Or run out of the cemetery alone? Tamper with the dead, or flee through a haunted world of shadow and decomposition, with no companion other than her own thundering heart?

“In seconds, my pet, you will be on the road to all that your heart desires. A passion and a tempest unlike anything even you have imagined. You came to me for help. You wanted magic. You’ve come this far, don’t stop now. Not before you secure all that you hope for on behalf of your babe and for your own life. It’s time,” Martha said. She sprinkled the blood across the disturbed earth of an antique grave, then lifted her arms to
the night sky, the very image of a Druid priestess in a field of ancient stones or one of the voodoo queens of Jamaica, from where she had come long ago. She was not a colored woman, but neither was she white. She had no definitive color, really. She was a pasty shade, like the moon behind the haze, and her eyes were a strange and watery blue.

She didn’t give Susan a chance to respond. She began to chant, her face lifted toward the sky, her arms still upraised. The words were unintelligible, a mix of English, French, Spanish and something more ancient. As Susan watched her, she felt herself becoming almost hypnotized by the magic lilt of the words. It was as if her limbs grew leaden, and any desire to be anywhere else left her. The tombstones and vaults, cherubs and angels, even the great guardian dogs, began to appear as natural a setting as the cozy parlor of her home, welcoming her.

The low-lying fog, caught in the amber glow of the moon, seemed to dance around her, wrapping her in an exciting warmth, fanning an ember deep inside her. She watched, she waited, she heard the music of the words and felt strength in the growing heaviness of her form. When she could move, she told herself, she would do so with passion and vitality. She would be vibrant and alive, filled with magic herself.

But even as the sense of well-being warmed her like a cup of cocoa on a cold night, something else was growing, as well. An inner voice warning her that she needed to shake off the leaden sensation. That she needed to run.

Because the ground was moving, erupting as if from a force deep inside, shifting the old stones that lay askew nearby. A shower of dust rose as something solid and large emerged from the ground, like a tree growing at a fantastic rate. Particles of dirt and dust and marble were caught in the faint glow of the tainted moon, gleaming like the snowflakes she had read about in books.

That inner voice screamed at her to run, but it was too late.

She saw what had risen, and a scream rose in her throat, but she couldn’t move, and no sound issued from her lips. She could still see Martha, standing there now with a satisfied smile, and she knew that she was no more to the woman than a rung in a ladder, a stepping stone toward power over the darkness. She saw it all so clearly now.

And then she saw what was rising from the ground.

Saw that all Martha’s promises had been no more than a ruse to get her there.

The horror approached her, malignant, evil, and she was paralyzed. She knew that whatever had been in the black drink was paralyzing her, saw everything so clearly now that it was too late—oh, God, far too late—to know and see and understand, to know that this had nothing to do with wonder and fantasy and magic.

She saw and felt the essence of evil, heard the rasp of its fetid breath, smelled flesh and blood and bone and the pungence of the earth as her fate stepped closer and closer still, drawing pleasure from her terror and her newfound knowledge…

She had not come to make a sacrifice.

She had come to
be
the sacrifice.