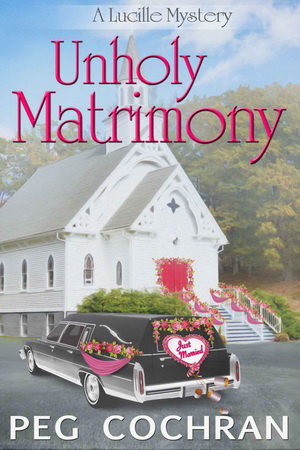 The hilarious Lucille Mazzarella is back and planning a wedding. But even the worst Bridezilla can’t create the wedding drama she’s about to face in this second book in the series.

Desperate to see her pregnant daughter Bernadette married before the baby comes, Lucille is engrossed in all things wedding. Nothing will distract her from planning this Mazzarella main event. Nothing, that is, except for the murder of the mother of the groom.

Just when things couldn’t possibly get any worse, Lucille is named as the prime suspect, and it’s a race against time as she and her best friend Flo struggle with shady financial dealings, a family that isn’t at all what it seems, a groom that might not be all man, and a little bundle of joy that might make an appearance before the mother can say I do.

Material excerpted from
Iced to Death
copyright © 2014 by Peg Cochran

Excerpt from
Iced to Death

“Yo, Bernadette. Shake a leg, would you?” Lucille glanced at the clock. They should have left fifteen minutes ago. “Yo,” she yelled again, “you’ve got to get a move on or you’re going to be late.”

Lucille was opening her mouth again but didn’t get past “Yo” when Bernadette slunk into the kitchen.

“You go with your father and I’ll take Cousin Louis and Cousin Millie with me. We’ll stop at Grandma’s on the way and pick her up. This way you won’t be too late on account of having to wait for us to get her in the car.”

Lucille turned around to look at Bernadette and her voice slowly trailed off. “You’re wearing that?”

“Sheesh, Bernadette. This is your rehearsal dinner. You couldn’t make more of an effort? You haven’t even combed your hair. This ain’t no diner we’re going to—it’s the Pantagis Renaissance, for chrissake.”

A sulky look settled on Bernadette’s face and she smoothed the cotton T-shirt over her burgeoning belly. “You think it’s easy to find something to wear when you’re nine months pregnant?”

Like she’d never been pregnant herself?
What did Bernadette think—that she and her father had found her in a cabbage patch?

“Just go comb your hair, okay?” Lucille glanced around. Her gaze fell on the wedding invitation she’d already framed and hung in the kitchen above the old wall phone she couldn’t bring herself to get rid of. She didn’t trust them cordless things. Forget to charge them and then where were you? Unable to call 911 while you’re having a heart attack or robbers in masks are coming in through the window. You’d wind up six feet under all on account of a dead battery.

Lucille stopped for a second to read the engraved invitation, although she’d already read it dozens of times. The script was so fancy she couldn’t hardly make out the words.

It was some odd kind of invitation, Lucille thought. Back in her day the invite came from the bride’s parents, but the Grabowskis wanted their name on there too. Probably on account of the fact that they had paid for them. Lucille had protested that the script was way too hard to read, but Donna Grabowski had insisted on it. Said it was how things were
done
. Lucille wondered how on earth Donna would know how things were
done
. They were both born and raised in New Providence, to working-class parents. None of this la-di-da stuff for them. They were simple people. Of course that was back when Donna was still Donna DeLucca. Before she’d married that big shot Alex Grabowski. Donna said he was a hedge fund manager. Sheesh, if Lucille had known there was so much money in landscaping, she would have told Frankie to go into that instead of pest control.

By the time Lucille turned around, Bernadette had disappeared again. Lucille could hear her in the bathroom. Just their luck that morning sickness had stayed with Bernadette the whole pregnancy.

Lucille sighed and made her way up the stairs. She tugged at her dress. Her sister, Angela, had insisted on taking her over to the Short Hills Mall to one of them real fancy dress shops. She said it wasn’t every day your only daughter got married. Lucille wasn’t so sure about that. What with the divorce rate and all, some people’s daughters were getting married three and four times.

The dress was turquoise and had one of them girdle-type things built right into it. Now she knew how sausage meat felt being squeezed into the casing. But she had to admit, it made her look good. Like she’d lost ten pounds without even having to diet. She hoped Frankie liked it.

Frankie was standing in front of the mirror over the dresser in their bedroom. He had a tie around his neck and was swearing under his breath.

He turned when he heard Lucille’s footsteps. “Holy crap, Lu, I think I’ve forgotten how to tie a tie. The damn thing keeps coming out uneven.”

“Here—” Lucille held out her hand. “Give it to me. It’s no wonder,” she said as she put the tie around Frankie’s neck, “you don’t wear no tie to work. Sheesh, I can’t even remember the last time you wore one.”

Standing so close to Frankie, Lucille got a whiff of his aftershave. Same one he’d been wearing since they began dating in high school. She picked him up a bottle every time she went to the drugstore so he wouldn’t run out.

Lucille twisted one end of the tie around the other. She could see how smooth Frankie’s face looked—he’d taken the time to shave extra careful. She had a sudden longing to reach out and stroke his cheek and feel the softness that she knew would be like a baby’s skin.

She took a deep breath and finished tying Frankie’s tie. On impulse, she put both arms around his neck and pulled him close for a kiss.

Frankie twisted at the last minute and Lucille’s kiss landed on his cheek.

Lucille stood back and looked at him. What on earth was wrong? That wasn’t like Frankie. Maybe he was just nervous because of the wedding and all—giving away his only daughter. That would be hard for any man. Still, Lucille couldn’t stop thinking about it as she headed back down the stairs.

Cousin Louis and Cousin Millie were waiting patiently in the living room, Millie sitting bolt upright, her hands folded primly in her lap, Louis slumped against the cushions, his head thrown back and a bit of spittle glinting on his chin.

Louis and Millie shared a house on Floral Avenue that had been left to them by their parents. Unfortunately, they’d had to sell it to pay Louis’s gambling debts. The new owner, who just happened to be Alex Grabowski, had agreed to let them stay on for a nominal rent.

The whole arrangement had worked like a charm until Louis took it into his head one day to warm up a can of soup. He promptly forgot about it and fell asleep on the couch. Millie was over at the church helping the Flower Committee decorate the altar for a funeral and when she got back the house was in flames. Fortunately Louis had escaped unharmed, but they had no place to live. Lucille had taken them in—after all, family was family—until the Grabowskis got the insurance money and rebuilt the house. Lucille hoped that was going to be real soon on account of feeding five mouths instead of three was getting expensive.

Of course Bernadette was leaving soon—tomorrow—Lucille wiped away a tear at the thought—and she would no longer have to buy the odd stuff that satisfied Bernadette’s cravings. One week it was artichokes at $2.59 each; another week it was some fancy French cheese Bernadette claimed she had had at the Grabowskis one night with cocktails.

“You and Bernadette had better get going,” Lucille called up the stairs to Frankie as she grabbed her car keys off the table by the front door.

“Time to go,” Lucille yelled into the living room.

Millie slowly rose from the sofa, smoothing her dress down over her hips. Louis let out a snort, opened his eyes briefly and then shut them again.

“Come on, it’s time we got going.” Lucille shook his arm.

Louis opened his eyes again and looked around in confusion.

“Better get going then,” Louis said as he pushed off from the sofa.

Lucille rolled her eyes and said a quick prayer to St. Teresa Avila, patron saint of headaches, because she was pretty sure she was about to get one.

Lucille’s mother lived barely five minutes away in the same house Lucille had grown up in. It was a modest neighborhood of Cape Cods and split levels, most of them well cared for. Even though July had been particularly hot, the lawns were all green and the plants were thriving. Lucille remembered her father standing outside with the hose on hot summer nights and the sprinkler going every morning.

She drove down the street slowly—kids were out playing and riding their bikes. She used to do the same when she was young. She glanced in her rearview mirror. It was a little strange with Louis and Millie sitting in the backseat of the car and her up front driving. It made her feel like one of them chauffeurs rich people had.