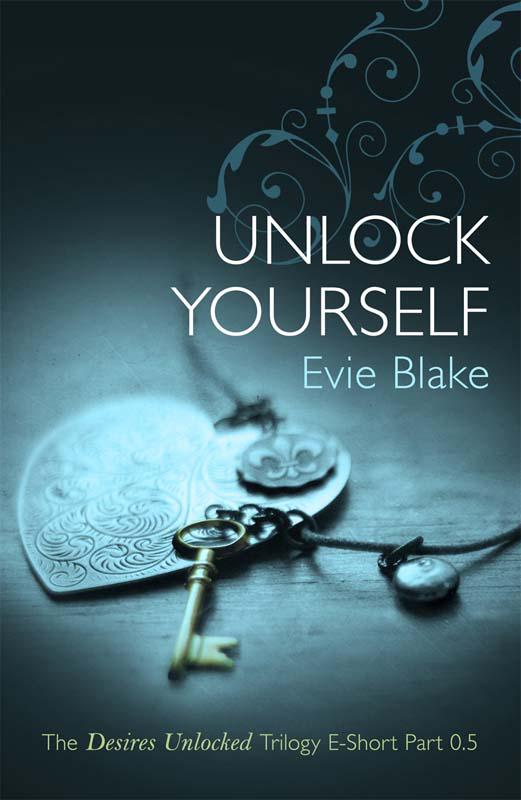 Excerpt from
Liberate Yourself
© 2012 Evie Blake

Freely inspired by the character Valentina created by Guido Crepax

The right of Evie Blake to be identified as the Author of the Work has been asserted by her in accordance with the Copyright, Designs and Patents Act 1988.

Special excerpt from
Liberate Yourself

Surrender Yourself
– coming soon from Headline

Evie Blake is from London. She is married with two children and is currently busy writing her next novel. For more about Evie Blake visit her website
www.evieblake.com
or follow her on Twitter
@EvieBlake1

For fans of
Fifty Shades of Grey
and
Bared to You
comes the irresistible, romantic and sensuous e-short
Unlock Yourself
, the prequel to
Liberate Yourself
, Part One of Evie Blake’s addictive, intensely passionate
Desires Unlocked
trilogy.

Gorgeously romantic and sizzling with heat and desire,
Unlock Yourself
is the perfect introduction to the world of the
Desires Unlocked
trilogy.

She is lost in Berlin. It is Valentine’s Day 1928, and the snow flutters around her like a thousand icy moths drawn toward a light. Ludwika sticks out her tongue and catches a flake. It melts so fast, and the sudden chill inside her warm mouth makes her shiver with anticipation.

She is lost and she wants to be. After her confinement, like a bird in a cage, her husband has unwittingly set her free. After all, he did bring her to Berlin.

He is sleeping now, the deep slumber of the drunk. He will not wake until morning and by then she will have found a way back to their hotel. That part of being lost is easy. The problem is she doesn’t want to go back yet. Ludwika is searching for something – she doesn’t even know what. She needs some inspiration to keep her heart in motion, to stop herself from withering and fading away beneath her husband’s touch. For it is not a loving touch. No, he lays hands of possession upon her, pummels her into something that is his, longs to fill her with his progeny. She is a means for him to immortalize his name. Yet she fails him in this task. Lately she feels his disappointment in his roughness. She is there only as a vessel to be filled. She could be any woman.

There has to be more.

She doesn’t know where this voice speaks from. It is as if it comes from a place deep within her – like the whispers of an ancestor.

Rapture,
the voice within her murmurs.

She wants to feel the meaning of this word. Surely everyone does, at some stage in their life? Isn’t that what passion is? It is not necessarily the sexual act. For the celibate nun, it is passion for God, but Ludwika has never been religious. For the artist, the dancer, the writer or the musician it is passion for their craft but Ludwika does not consider herself to be creative. She wants to feel another kind of passion: a communion with a fellow soul. She is married and yet destitute. She never thought a wife could feel so alone.

And so out into the glittering Berlin night Ludwika goes. It was easy once she had decided to do it. She refilled her husband’s wine glass after every sip he took, and plied him with brandy after dinner. He got drunk. There was a price to pay, for when he did he got mean. She places her gloved hand upon her stinging cheek. He had called her a barren bitch, not a real woman but a useless member of her gender, a creature unable to breed. She couldn’t give him a child. And all he did for her … the clothes, and the fine house in Venice, and now this lavish trip to Berlin, and yet she could not give him anything back. She was worthless. He had screamed this at her, his eyes black with loathing, bulging in his flaccid face as he reached out and slapped her. No remorse, no apology. To her relief he collapsed on the bed, and then to her joy she heard the low growling snore of deep sleep. Ludwika made her escape.

In this city, you can be anyone you want. She has heard that Berlin is a place devoted to sensation; where men and women can love freely. Men can love other men, and women love each other too. The idea of the latter fills her with tingling delight. How scandalous that would be. Often when she is in the company of her husband, and his associates and their wives, it is the women she admires the most. Catching sight of a curl of hair tucked behind a delicate shell ear, or the porcelain nape of a neck, a flicking wrist or a tiny ankle can produce a shiver down her spine. She has heard that in Berlin some women are equal. Indeed they have their own money and professions, run clubs and cabaret theatres. Men and women can be independently in love in Berlin. None are enslaved to the other. They are free to sing and dance in the bars and the clubs, to watch lesbian cabaret, and to pair with whoever they wish, whichever gender. These people can make love all the night long.

Yet now that she is walking along the icy streets of this city, her black wool cape billowing around her, her breath steaming the air, she has no idea to where she is hurrying. She knows no one in Berlin. Where should she go? She stops on a street corner, and listens intently. She can hear sounds, muffled and enticing, and yet if she looks up and down the street all the houses are dark and shuttered.

I need a fairy godmother, she thinks, and within an instant of this thought she sees the figure of a young woman walking towards her, down the empty snow-laden street.

Afterwards Ludwika would often wonder about the timing. Had she called the girl to her? Was the girl her guide? One might think so, especially after what happened. And yet there was nothing remotely fairy godmotherish about the creature who approached her that night.

The girl is slight, ephemeral, and slightly vampish. She is not in the least maternal looking. In the first instance she is wearing no coat, just a tight fitting black cloche hat upon her head to protect her from the snow that continues to drift slowly, swirling around them in a dizzy spell. This singular girl wears an exquisite yet skimpy dress in the flapper style, all shimmering black silk, and a pair of black satin shoes which manage to hold her upright despite their height, and the slightness of the heels as they skid on the slushy pavement. She is tall with long slender legs, a fluidity of movement which instantly reminds Ludwika of a dancer. Her skin is so pale it is almost the same shade as the snow and as she comes closer Ludwika can make out her face. She has never seen such perfection, each feature so fine, as if drawn in black ink. She possesses an Oriental delicacy, and yet she is a Westerner. She has a heart-shaped face; no rosebud lips, no baby-sweet girliness, yet a dainty mouth, almond-shaped eyes, and strong dark eyebrows. She can look a man straight in the eye. The girl sees Ludwika and she is smiling as if they know each other; as if they are comrades.

Ah, she says. I have been looking for you.

To Ludwika’s astonishment the girl links arms with her, and begins to march them down the street. She is tucked in close to her. She smells of a summer garden, blooming and giddy with jasmine and honeysuckle, despite their freezing urban environment.

Where are we going? Ludwika ventures to ask this tantalizing creature.

To the party, of course – the party of all parties, Belle, the girl says to her.

My name isn’t Belle, its Ludwika; that’s ‘Louise’ in English.

The girl stops walking and turns to her. Her face is sparkling with delight.

Oh my, Louise? Why, we have the same name, my dear, she says. I just wanted to call you ‘Belle’, because you are.

Her namesake takes her to a part of the city her husband never showed her. This is the Berlin of her dreams. Jazz bursting out of sparkling clubs, laughter and sultry cabaret singing calling to her, each doorway they pass an opportunity for wantonness. Yet Louise keeps walking her through the falling snow. Ludwika is shivering now, and she wonders how Louise could not be cold, and yet she appears unaffected, padding silently like a cat across the broad white boulevard.

They pass through three gateways, and up a narrow staircase until finally they reach a tall brick building. They enter through a narrow doorway, the light within beaconing her, and she feels as if she is entering into the bowels of a golden cave. They stand in the black-and-white tiled lobby, a chandelier of a million diamonds glinting above them. She slips off her cape, heavy with snow, and it is taken from her by a young woman with short slicked back black hair and arched eyebrows, wearing a trouser suit with such shiny buttons she can see her own astonished reflection in them. Louise removes her hat. Ludwika covers her gaping mouth with a gloved hand in awe, for Louise is sporting The Look. She has seen plenty of young women with short bobbed hair – some even dressed as men – since she arrived in Berlin, and yet here on Louise the style takes on a different persona. It is no longer merely tomboyish. No. Louise’s hair is shiny as a blackbird’s feathers, sleek, and smoothly framing her precisely crafted face. The haircut is a statement:
I am no longer encumbered by the wants of men. What I want is what I want for myself
. Instinctively Ludwika reaches up to touch her own locks, coiled and locked tight into a bun on the back of her head. Set loose her hair reaches her tailbone. It is one of her husband’s most prized possessions: Ludwika’s long tresses of inky black. He used to like to brush her hair, in the early days of their marriage, yet now all he does is pull it, hard, tight at the back of her head, so that it tears at her scalp. Ludwika tries to banish a sudden image from her head but she can’t quite. Last night, their first night in Berlin, and he wound her hair tight around his hand like it was a rope and he pulled her head back as he made her kneel on the bed, and tried to make a child inside her, in the way that dogs do it. He had been brutal, urgent, and yet something about it had been better than when she just lay on her back. Part of her was disgusted by it, and yet part of her fascinated. There were other types of sexual acts.

She feels a flutter of fingers upon her forehead. It is Louise. She is stroking the worry lines from her face.

Forget him, she whispers to her, pulling Ludwika’s gloves off each of her hands, and hurling them at the attendant.