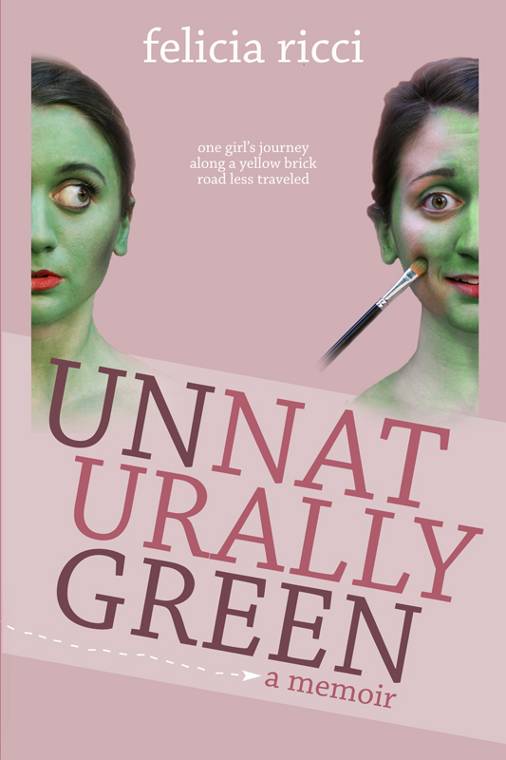 one girl’s journey along a

The names and identifying aspects of some characters have been changed. This book is in no way affiliated with or endorsed by
Wicked
.

For Grandma Yola, with love.

ACT ONE
.
THE CYCLONE

1.
having a flavor that is raw, harsh, and acid, due especially to a lack of maturity:
a green teenager.

2.
of the color of growing foliage, between yellow and blue in the spectrum:
a green tree.

5.
not fully developed or perfected in growth or condition; unripe; not properly aged:
a green actress.

I
saw
Wicked
as a surly and disbelieving English major the winter of my sophomore year at Yale University. In my 19 years of living, breathing, and having strong opinions, I’d done dozens of shows, all of which were non-professional and most of which involved jazz hands. When it came to theater—or anything, for that matter—clearly I knew what I was talking about.

My parents were visiting New York from Rhode Island, loading up on shows for their semi-yearly Broadway fix, and I’d taken the train from New Haven to meet them. We had great seats—fifth row, center—and I sat sandwiched between my giddy little sister and bespectacled boyfriend, a small man who now exists as a bust in my Dating History Museum, along with other lifeless renderings of ill-advised suitors.

All right, impress me
, I thought from my seat.
I want to see what this hype is all about.

(
GREEN
.
1.
having a flavor that is raw, harsh, and acid, due especially to a lack of maturity:
a green teenager.
)

With a flourish, the show began, and in moments, I felt my tight little sophomore buttocks unclench. Soon, I was hooked:
oohing
and
ahhing
at the music, sets, lights, costumes, and performers—just like the millions of fans who had come before me. Most enthralling was the green-skinned protagonist, played by actress Shoshana Bean, a high-cheek-boned goddess with belting and riffing powers that bordered on the supernatural.

Elphaba Thropp was her name. She’d been known first as a villain, as the so-called “Wicked Witch” of
The Wizard of Oz
. Now she was a heroine. Each night at the Gershwin she came to life for thousands of theatergoers. Over time, her story would become a worldwide phenomenon, proliferating into productions that played across the globe, breaking box office records—changing the world, one unclenched sophomore buttock at a time.

I watched as Shoshana tore across the proscenium, clocking the audience with high note after higher note, sailing into the vocal stratosphere, forging through each scene with mind-blowing skill.

Was she human, I wondered, or engineered to make the rest of us feel meek and unworthy? These were legitimate questions, and I needed answers.

Soon it hit me like a (pick your cliché): ton of bricks, speeding truck, Catholic nun. Amidst my awe and disbelief, I had joined the ranks of probably every other girl in the audience.

This is my dream role!

Elphaba Thropp had won me over. She was young. Hopeful. Misunderstood.

Strange in appearance, unwavering in conviction, Elphaba was a heroine for those of us who, at any point in our lives, had felt different.

My next thought? (And I hope you saw this coming.)

I want to play that role
.

A stirring ambition for a young English major—soon squelched by the droning voice of reason.

You could never, in a million years.

A million years later and I was back in the audience of
Wicked
, making my way through rows of velvet seats at San Francisco’s Orpheum Theater, towing along my tiny new friend named Libby. With three minutes until curtain, we shimmied to the center of an aisle, wearing our all-access lanyards, and seated ourselves next to a slouchy couple and a little girl wearing a tiara. From my chair, I felt a gurgle deep in my gut.

I had jolted awake that dreary March Tuesday three hours before my alarm. My stomach had started to churn, like bread dough kneading itself—filled with a sticky clod of anticipation.

Gripping my armrests, I tried to relax.

“This is exciting, isn’t it?” said Libby, with a little leg-kick-bounce.

Libby wasn’t just a spectator; she was also a member of
Wicked
’s cast. As standby (or first understudy) to the role of Glinda, when she wasn’t performing she was waiting—sometimes watching the show, sometimes diddling around backstage. Still fresh in my mind was her cutie patootie performance last weekend, when she had stolen audience members’ hearts as the charming, beautiful, universally adored Glinda Upland. She had been perfectly cast—a ball of glitter, with platinum hair that framed her button of a blue-eyed face, which, like the rest of her, was doll-sized.

As we burrowed into our red seats, Libby’s feet barely touched the floor.

I was not doll-sized, but I guess I was moderately adorable—at least more than usual. Tonight I’d taken a break from sweatpants and instead went all
Extreme Makeover
on myself, arriving at the theater in a nautical-inspired blue and white sundress with wedge boots. I’d even attempted a salon blowout, which for me meant flipping my hair upside-down, blasting it with heat, and spritzing it with every bottle under my bathroom sink. The full effect made me look like a longhaired poodle that had accidentally licked an electrical socket. But it was an upgrade from looking like my old kickball coach, with her low-slung pants, messy bun, and chin hairs.