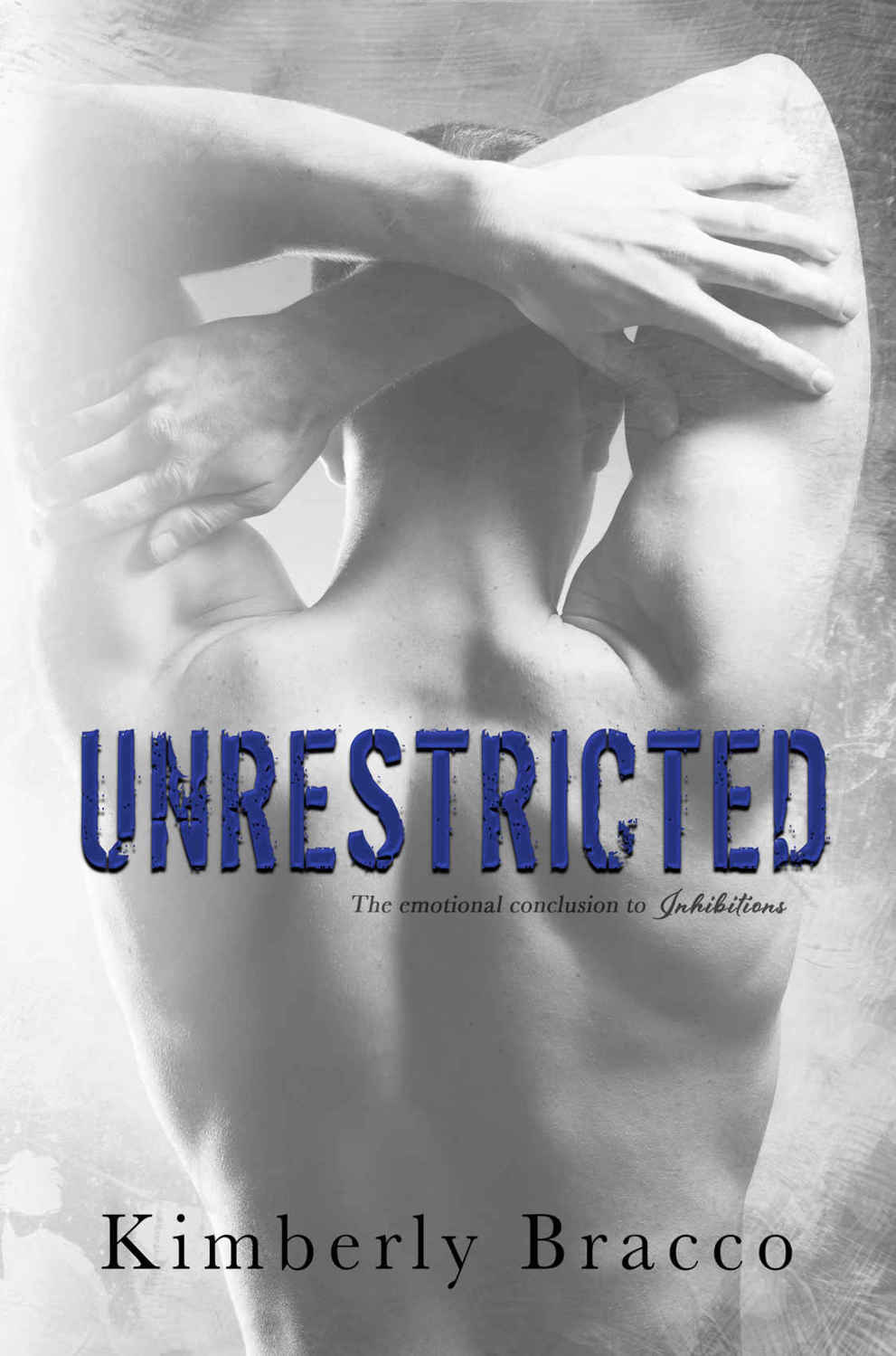 All rights reserved. No part of this publication may be reproduced, distributed or transmitted in any form or by any means including electronic, mechanical, photocopying, recording or otherwise, without the prior written consent of the author except in the case of brief quotations embodied in articles or reviews.

This book is a work of fiction. Names, characters, places and incidents either are products of the author’s imagination or are used fictitiously. Any resemblance to actual events or locales or persons, living or dead, is entirely coincidental and beyond the intent of the author or publisher.

The following book contains mature themes, strong language, and sexual content. It is intended for mature audiences only.

Sneak Peak: Hate to Love You

To all those who have royally screwed up, it’s never too late to right your wrongs. Everyone deserves a second chance, you just have to earn it. And for those that have been hurt, no one is perfect not even you. Don’t live life holding grudges. It’s too short.

“Everything will be just fine, Sweets,” Quinn says, squeezing my hand.

“I know,” I tell her, giving her a small smile because that’s all I can manage at the moment. The butterflies in my belly feel more like dragons. I can’t remember the last time I was this anxious or nervous.

A knock on the door grabs our attention, and the bubbly blonde technician from earlier wheels in a huge cart holding what looks like an old-style computer, like the machine in Dr. Marcus’ office, only bigger. There’s a keyboard with a big rolling ball in the middle. There’s also a slot in the side that holds a bunch of wands.

“This is the machine we’ll be using,” she says, showcasing the ultrasound machine like Vanna White. “And I’ll be the one doing your scan today.” She smiles brightly. She must really love her job. “This is what is commonly referred to as your first trimester scan. It will take about half an hour, and when I’m all done, I’ll send over my findings to your doctor. He’ll go over everything at your next appointment.”

Her bright pink scrubs with dancing kittens make it impossible not to smile back at her, so I do, while nodding to acknowledge my comprehension of what she just said.

“Okay, I’m going to hit the lights. I just need you to roll down your pants and push your shirt up a little bit,” she tells me as she stands up from her little wheeled stool.

I do as she asks, and when she sits back down, she squirts some jelly on my stomach. The coldness causes me to jump.

“Sorry, I should have warned you,” she says apologetically.

She presses a bunch of buttons on the keyboard and shows me the monitor, asking if everything has been spelled correctly before grabbing one of the wands from the holder. “I’m sorry. I can’t believe I didn’t ask earlier. Are we waiting for the father to join us?”

“No,” I reply in a nasty tone that she really doesn’t deserve. “There is no father.”

Her smile fades. “Okay, let’s get started then.”

“You’re running like you just robbed a bank and someone’s chasing you, Son.”

He doesn’t leave, so I know that some kind of lecture is coming. I slow down the speed of my treadmill. I’ve been maintaining a decent speed over the last hour, so I’m kind of annoyed with his interruption.

“You’ve been pushing yourself pretty hard lately. Be careful, would you? It’d cripple this team to lose you over something stupid like overtraining,” Coach says in that stern voice that he always uses when he’s trying to get a point across. He uses it a lot with the rookies when they need to be knocked down a peg or two. I always get a kick out of watching him hand them their asses during training camp.

“It’s either training or drinking, Coach. Which do you think would be more beneficial?” I ask sarcastically, focusing on adjusting to the new pace.

He leans over the side of the treadmill to look at the display, shakes his head, and then returns his attention to me. “Well, Tanner, you’re at twenty miles already, and it looks to me like you have no intention of stopping anytime soon, so I’m starting to think drinking may have less of an effect on your body.”

“You telling me to drink my problems away instead?” I ask, stunned the suggestion has even left his mouth.

“What I’m trying to tell you is that I’ve watched you push yourself ridiculously hard for the last two weeks, and it’s going to wind up biting you in the ass sooner or later. You can’t run yourself into the ground. The team needs you. You know it’s an important time of the season. We can’t afford any stupid mistakes. I don’t want you to go down because you’re pushing yourself too hard. You can’t train away whatever it is that’s bothering you, Son. If you need to keep yourself busy to avoid whatever it is that has you all wound up, find more than one vice. I’d rather you go out and tie one on once a week if it means that you’ll take a day off from running yourself ragged in here. Everything is fine in moderation. Just make sure that it’s on the right side of legal, please. This team won’t stand for any stupid scandals.” He doesn’t wait for a response from me, just turns and walks away.

Is he for real? He’d rather see me go out and get shitfaced than be in here training? I mean, sure, I’ve been here a lot lately, but it hasn’t been that bad. Like I told Coach, it’s either this or drinking myself into oblivion the way I did the first few days after Ashley fucked me over. I spent as much time as I could completely wasted over that bitch’s betrayal, and it showed in my game that weekend. Thank God the defense picked my sorry ass up because if not for them, that game would have been a complete massacre. I was sacked more in that one game than I’ve been all season, and I felt each and every one of those hits for two days afterward, but at least we didn’t lose. The bitch has ruined a lot of shit for me with her little stunt; I’m not going to let her take football from me too. That’ll be the last time she affects my game.

I used to fuck away my frustrations, and it worked for years, but now it’s one of the many things that has been ruined for me, thanks to Ashley. I haven’t been able to think about sex without freaking out since I left her. I wish I could. Maybe I could if I got drunk enough. Maybe then I’d be able to stop thinking about all the ways a chick could screw me over the minute I put my dick in her. I’ve even considered the possibility of double bagging it. You’d think that weeks later, I’d be over her. I haven’t heard a word from her since, so I don’t really know why I can’t seem to get her out of my mind. It’s really fucking annoying.

I look down at the treadmill display only to realize that I’ve run another five miles since getting lost in my thoughts, and I figure that I should probably call it a day. I will say that all this training has improved my long-distance stamina. I used to only be able to handle around ten to twelve miles but not anymore.

I grab my towel and wipe away the sweat that seems to be dripping from everywhere. Coach might have a point about pushing myself too hard because I’m feeling pretty beat down and I’m dying of thirst. A nice, long shower sounds like heaven after a workout like that. My once light gray shirt is completely soaked with sweat, and my basketball shorts are sticking to my legs, causing my boxers to stick to my balls.

I roll my cold bottle of water along the back of my neck as I head toward my locker. The coldness against my overheated skin makes me break out in goose bumps and causes me to shiver. I probably look like I’m having a bunch of muscle spasms as my body shakes involuntarily. Thank God no one else is in here now. Stopping at my locker, I chug the rest of my water and grab my shower bag, my thoughts now strictly on getting into the shower to cool off and figuring out how to distract myself for the rest of the day.

After showering and throwing on clean clothes, I go to the projection room and start going over the game film from last week. I’m almost embarrassed to say that it’s me out there on the field. Unable to watch myself get my ass kicked for very long, I switch over to watching films of Buffalo’s defense to prep for this week’s game. By the time I’m done, I think I can honestly say I know every play their defense has called this season. Having watched each play over and over, I can now tell which ones are going to be blitzes just from reading the linebacker’s face. With their defense down, I start reviewing our new plays one by one until I’m sure I could recite them in my sleep.

How has my life come down to keeping myself distracted from a woman’s deception? I’d had everything down to a science, and I’d been content with the way things were. Why did I have to go and fall for her and convince myself I could have something so pure? I should’ve learned from my mistakes by now, but I guess I’m as hardheaded as they come. I shake off those thoughts and decide that I just need to suck it up and move on. I may never fully understand the whats and whys and hows of this mess, but it’s time to man the fuck up and get over it. I’m Tanner Garrison. When did I become such a pussy?

Enough of this shit. Time to pull my head out of my ass. I stare at the film
o
f last week’s game for ten minutes before deciding nothing’s sinking in. I need to get out of here and clear my head. As I close my playbook, my phone rings. It’s Melissa. She’s a perfect distraction. The call is like a sign directly from above that I’m ready to move past all this nonsense with Ashley.

“Hey, Melissa,” I answer, trying for a cheery tone.

“Well, you sound awfully happy for a change.”

“Yup, I’ve decided that it’s time to move on and stop feeding into the shit with Ashley,” I inform her, but I feel like the resolve is missing from my voice.