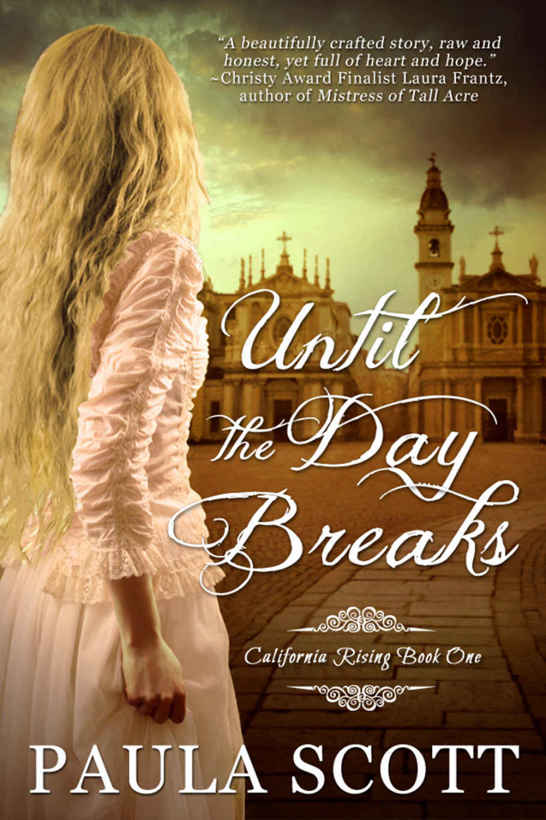 UNTIL THE DAY BREAKS

Until the Day Breaks
by Paula Scott

This book or parts thereof may not be reproduced in any form, stored in a retrieval system, or transmitted in any form by any means—electronic, mechanical, photocopy, recording, or otherwise—without prior written permission of the publisher, except as provided by United States of America copyright law.

This is a work of fiction. Names, characters, places, and incidents are products of the author’s imagination or are used fictitiously. Any similarity to actual people, organizations, and/or events is purely coincidental.

“Behold, the eye of the LORD is on those who fear him,

on those who hope in his steadfast love.”

The stranger appeared out of the darkness. She didn’t notice him until he was standing beside the fountain, staring at her. He was tall and broad-shouldered, but bone-thin and covered in trail dust. Rachel thought him a vaquero. A long knife hung from his leather belt, and a pistol rode in his waistband. He wore the weapons gracefully.

Aghast at his arrival, she sloshed out of the fountain on the opposite side of where he stood. As soon as her bare feet hit dry ground, she dropped her skirt to cover her naked knees. “I’m sorry,” she said breathlessly, shocked at how quietly he’d arrived, even with those long spurs strapped to his dusty boots.

“I’m not sorry. Did the fountain refresh you?” A smile softened his hard, handsome face as he slowly stepped around the fountain to her.

Heat flooded her cheeks, and then drained down throughout her body in a slow, torturous trickle. Her dress stuck to her damp legs. Should she put her shoes and stockings back on with him standing there in front of her, or wait for him to take his leave?

“Do you always wade in fountains?”

“No,” she managed to answer. “We don’t have these fancy water pieces back home.”

The scent of leather, horses, and tobacco clung to him. He appeared to have just stepped off his mount. His perfect English made her suspect he was a fellow American. She certainly hadn’t seen him thus far. Desperate to compose herself, she smoothed a loose curl behind her ear with a shaky hand.

Guitars and violins reverberated through the darkness. The aroma of roasting meat drifted on the air. Unseasonably warm weather and a full moon added to the allure of the fiesta. It was midnight, but the party in the front courtyard continued with more than a hundred Californios celebrating her father’s marriage to Sarita Tomaso. Scores of lanterns glowed in the limbs of the live oak trees surrounding the adobe and timber mansion with its double porches. Yet in the walled garden behind the hacienda it was only the two of them.

He stared at her intently and then glanced around. “Where is your
dueña
?”

“I have no dueña.” Her father informed her yesterday that Sarita’s dueña would attend her after the wedding fiesta. Married women had no need for such servants, her father said.

“No dueña?” The man took her measure. A head-to-toe assessment of her body that quite shocked her. His scrutiny felt as if he’d reached out and touched her with his hands. Unnerved, she dropped her gaze to her damp skirt and then to the ground to study the dirt between his boots and her bare feet. Silence reigned until she could no longer stand the tension between them. She glanced back up at him.

His eyes, surprisingly light in color, blue or green, perhaps, stood out in his deeply tanned face. “Are you married? If you were my wife, I would not allow you to wander from my side.” His mouth quirked into a half smile that melted her defenses.

She swallowed hard. Thoughts of Steven suddenly assailed her. Somehow she felt she’d just been unfaithful to him. As if she’d given this man something, or perhaps more accurately, he’d taken something from her. He’d certainly taken more than her measure. “I have no husband,” she admitted.

Not yet. Steven was only her fiancé.

“What about your mother? Surely, she would not approve of you wandering about this way unattended.”

“My mother died when I was a babe. My grandparents reared me.”

“Your grandparents are of English descent?”

“And they brought you all the way to California?”

“No. They remained back east. I traveled alone by ship around Cape Horn.”

He leaned closer, this ebony-haired man drenched in weapons and the wilderness and a dangerous desirability she’d never encountered before. His voice, already melodious to her ears, softened even more. “Alone? There is only one kind of woman who journeys to California alone. Yet you do not strike me as this kind of woman.”

She had no idea what kind of woman he spoke of, but the way he leaned so near left her feeling dizzy. Dark, dangerous men roved California like the cattle on a thousand hills here, but this man was different. He spoke with authority and the refinement of one born to lead men, and his manner conveyed strength and confidence and impeccable breeding. He completely unsettled her.

“Who is your padre? He is not wise to leave you unattended this way.”

“Joshua Tyler is my father.”

“Joshua Tyler?” Disbelief edged his voice. He stepped away from her.

His face grew hard. “I am Roman Miguel Vicente Ramon Vasquez.” The name that rolled out of his lips was utterly Spanish. She was taken aback. He wore weapons and bore a Spanish name. Perhaps he served her father and was as mortified as she over this unseemly encounter between them.

“I am not a vaquero. I would never watch over Tyler’s daughter. Your padre is a thief and a foreigner. Where is he tonight?”

Stunned by these accusations, she glanced around for help, but the small walled garden hosted little more than the fountain, fruit trees, and several rosebushes struggling to bloom. She took a deep breath, pretending she wasn’t frightened of him at all. In truth, he terrified her. “My father and his wife retired to their living quarters hours ago.”

“He deserted his guests?”

“Your padre abandons his guests and leaves his daughter to wander about the night alone? A slip of a girl without her stockings?” He gave her bare feet a disapproving glance. “Unbelievable, even for a Yankee.”

“Who are you to judge my father?” Hands atremble, she jerked her skirts out to cover her naked toes. “To judge . . . my . . . stockings?” She shook so badly she wondered if he could see her quaking. She’d never had an altercation with anyone in her life, least of all a man who left her fumbling for breath and reason.

He spoke tersely, “You should not be in California. Your father isn’t wise to bring you here. War is coming. Women do not fare well in war. Especially women like you.” His gaze locked with hers for a moment, challenging, warning, entreating. Then he spun away, limping into the darkness as quietly as he’d come.

A forceful rap on her door startled Rachel as she knelt beside her bed the following morning, trying to pray and still upset about the man she’d met at the fountain. Her thoughts scattered as her father threw open the door and strode into the room. Heart pounding at his arrival, she smiled up at him, remaining on her knees beside her bed.

“Why are you hiding in here? You should be entertaining my guests.” He stared at her for a moment before continuing. “You remind me so much of your mother. She prayed often too.”

Eager to hear something—anything—about her mother, Rachel rose to her feet, her stomach knotting at her father’s impatient manner. “Tell me about my mother.”

Turning his back on her, he walked across the room to gaze out the tiny window carved into the adobe wall. All windows in her father’s wilderness home were small for protection. No Indian or animal could enter the hacienda unbidden through these little openings, she’d been told. At the window, he sighed deeply. “Leave the past in the past, my dear. I came to talk about your future.” Her father moved to the handsomely carved writing desk beside the window, picking up a letter she’d left lying there. “What is this?”

“A letter to Steven.” Oh, how she missed Steven. Would she ever see him again?

Her father’s mouth formed a grim, hard line. “I’ve already said we will leave the past in the past. This young man is of your past, not your future.” He crumpled the letter in one hand. “I have a brilliant life planned for you, my dear, and it begins today.”

He kept the ruined letter in his fist, tucking it behind his back. “Mother has written that you sing beautifully. I want you to sing for my guests this evening. Singing and dancing are very meaningful to the Californios. Most of their celebrations involve these forms of entertainment. One of my servants will arrive shortly to instruct you in the Spanish way to dance.” His voice gentled, and he turned thoughtful, even smiling. “I’m so pleased you can sing. Your mother had a beautiful voice. I used to have her sing to me when I was tired. Her voice was like an angel’s. And you are so very lovely. As was she, God rest her soul.”

Speechless, Rachel laced her fingers tightly together, praying for an appropriate response as her knuckles turned white. Nothing came to mind concerning what to say about Steven, so she focused on the singing for now. “But I only sing at church—”

He cut her off. “You are no longer with my parents, wasting your life on religious fancy. You will sing for my guests tonight. That is all there is to it.” He threw the balled-up letter on the floor.

Her father wasn’t a large man, but there was something larger than life about him. A will to be reckoned with that made him utterly formidable. He looked nothing like she had expected. What had she expected? A bespectacled old man like her grandfather?

In his prime with a headful of thick blond hair waving off a high, proud forehead, her father had the whipcord muscles of a twenty-year-old. His tanned face made his blue eyes all the bluer. Those blue eyes seared her now. “I want you to act like a well-raised Californiana. I didn’t bring you here to place you in a convent. I brought you here to make a good union. When Mother wrote that you had grown into a beautiful girl set on marrying the young man taking over for Father, well, such a waste, I decided. My daughter marrying a minister. I vowed I would not stand for it. That’s when I realized if you were appealing and untouched, you would be of great value to me here in California.”

Unfaithfully Yours by Nigel Williams
Love on the Road 2015 by Sam Tranum
Underground 4 by Janelle Stalder
The Meltdown by L. Divine
Think of England by KJ Charles
Judicial Whispers by Caro Fraser
Snow-Walker by Catherine Fisher
The Moonspinners by Mary Stewart
The Pretender by David Belbin
It's Not Summer without You by Jenny Han
Our partner