Read Until the End of the World (Book 3): All the Stars in the Sky Online

Until the End of the World (Book 3): All the Stars in the Sky

BOOK: Until the End of the World (Book 3): All the Stars in the Sky
13.03Mb size Format: txt, pdf, ePub
Read Book Download Book
ads 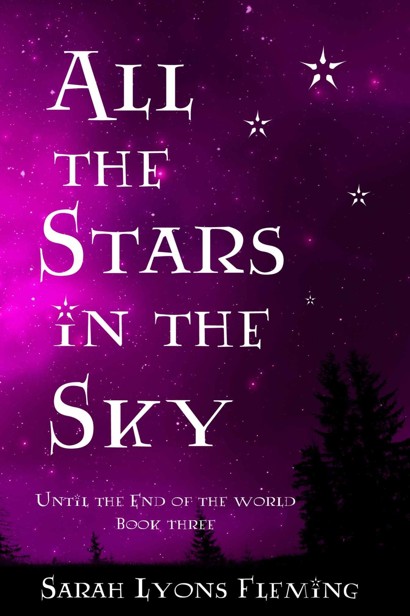 All the Stars in the Sky

Until the End of the World, Book 3

All Rights Reserved. No part of this book may be reproduced in any form without permission in writing from the author, except as used in a book review. Please contact the author at [email protected]

For Jamie, my first and most favorite fangirl. And my own personal juker.

And for my parents (again). Because y’all deserve more than a novella.

It isn’t easy to be optimistic when you have thousands of unknown miles ahead of you and an army of zombies at your heels. Especially when the road you’ve been traveling for hours is barren of all life—except the undead, of course. If I hadn’t promised to believe everything will be all right, I might consider jerking the steering wheel out of Peter’s hands and sending us all into a tree. It may be unlikely we’ll get to Alaska, but I won’t be the one to say it.

Peter takes his puffy eyes off the road. I’ve begged him to sleep, but he refuses. I couldn’t sleep after Adrian died. “Maybe in a little while.”

Peter’s the main reason for my optimism. He says we’ll make it, and I think that belief is what’s holding him together. That and Bits, who sits in the back with Hank, both staring out the window as we follow the RV and pickup through Quebec. Or maybe we’re in Ontario now.

I unscrew the cap of my water bottle and offer it to Peter. His dark hair is limp, hanging to his cheekbones, and he pushes it back with a sigh. I want to say something, but there’s not much to say to someone when they’ve just watched the person they love become a zombie. I know this from experience.

The sun bleaches the brown grass to beige and flickers through the trees like a strobe light. I’m too tired to find my sunglasses, so I close my eyes to escape its brightness. A moment later I start awake, heart racing and damp with sweat. I saw Ana, face slack and neck bloody, right before I sent a bullet into her brain. John under a pile of Lexers. Henry’s struggle before he fell into the bus. Dan watching us leave from the ambulance’s roof.

Dan’s dead by now. If he lost the nerve to do it himself, even bolstered by the flask he always carried, enough time has passed that he’s one of them. Dead, even if he’s walking. I know he didn’t lose his nerve, though. I may not have known him as well as I could have, but he wasn’t the kind of guy who’d sit around and wait to become a zombie.

I haven’t slept in over a day, but I won’t sleep until Peter does. He needs the company and, truthfully, so do I. I’m afraid to go to sleep. To dream. Because no matter how optimistic you are when awake, sleep gives your brain free rein to fuck with you. My eyelids threaten to lower and I sit up straight, legs crossed under me. Criss-cross applesauce, Bits calls it.

He doesn’t argue, even though I know he wants to by the way he grips the steering wheel. Penny sticks her head between us from the back. “Let me and James take over for a while.”

Penny doesn’t look much better than Peter, but she uses her teacher voice that leaves no room for argument. She hasn’t asked me for more specifics about how I killed her sister. That’s a conversation I hope never to have. Peter pulls to the side of the road. The other vehicles stop and Nelly leans out of the pickup’s window. When he sees we’re switching, he sits with the engine idling until we resume driving. Our last pit stop wasn’t too long ago.

There isn’t much room for passengers when the VW’s bed is open, but Bits and Hank are small kids and they fit on the two seats that are left. I smile at them and even Hank, who lost his dad yesterday, smiles back.

“You guys tired?” I ask. They both shake their heads. “Hungry?” Two more shakes.

I finish working off my boots and dig my fingers into my heel. It may be smarter to sleep with my boots on, but my feet need out. Peter kicks off his boots, places his holster by his side and flops back with an arm over his eyes.

Hank fingers Adrian’s knife on his belt, which I officially gave to him last night. I had my Ka-Bar in my bag, and Adrian would have liked for Hank to have it.

It would almost be funny because he’s a skinny ten year-old with big glasses and burgeoning dreadlocks that look more like a clear-cut forest than hair, but his dad is evident in Hank’s serious expression. I hope there is such a thing as Heaven, and that Henry’s with Corrine and Dottie now. I hope everyone we’ve lost is up there, having a kick-ass dinner or something. John believed they would be, and if it’s true, he’s up there.

I kiss the kids’ foreheads, then lie down and steel myself for more images: The splatter that flew out the back of Ana’s head, hitting the Lexers behind her. The way her hands twitched on the dirt road before going still. But when I close my eyes, it’s only blackness. Even my brain is too tired for games right now.

I wake in the late afternoon when Peter kicks me in his sleep. His eyes open. I can see he’s remembering Ana by the way he swallows and stares into space. That first wakeup is the worst. They all suck, but the first one—the one where you remember someone is dead—takes the cake. Every once in a while, even months later, you get one that’s almost as bad, but you’re somewhat used to the letdown by then. You’ve grown a thicker skin, even if it only feels like a millionth of a millimeter.

I rest my cheek on the mattress. “Just don’t steal my blankets unless you want to be kicked back.”

He tries to smile, and I touch his shoulder before I sit up. Bits and Hank are still in their spots, Sparky the cat perched between them. James is behind the wheel and Penny is asleep in the passenger’s seat, hands resting on her round stomach. Penny’s always hated naps, but at six months pregnant she craves them. She’s not missing anything exciting. The road had been open fields, then an endless wall of trees on either side, and now we’re at flat with small groups of trees.

“Well,” I say, “Ontario’s shaping up to be just as exciting as Quebec.”

“Seriously,” James agrees. “We’re coming up on a town where we’re going to look for fuel.”

We’re sticking to gas stations instead of siphoning or draining fuel from the tanks of abandoned cars. Most have already been emptied, or the gas has oxidized into an engine-destroying muck that even our fuel stabilizer can’t save. Add in the time it took to check each car, giving Lexers time to converge on us, and it quickly proved to be an exercise in futility when an hour’s work produced four gallons of usable gas.

The pickup has a hundred gallon tank in the bed, but with three vehicles, one an RV, we’re blowing through gas like it’s water. Which, incidentally, we’ve also seen plenty of—there’s a lake or pond or marsh every time you blink. It’s great for drinking and washing up, something I’d really like to do, but water isn’t going to get us another 3,600 miles.

We discussed ditching the gas-guzzling RV last night, but we need a vehicle that holds a lot of passengers in case something happens to the pickup or VW. I hope we don’t have to ditch Miss Vera the VW. She’s not as shiny as she was a day ago, covered as she is in dead bugs and dust, but her wood interior still gleams. The general consensus was that there’s no correct answer, so we left it as it is for now.

We cross a small bridge onto a street of plain houses painted various shades of brown. They’re unfenced, with only the eternal flatness of this part of Canada as their backyards. We’re hoping to make it through the thousands of miles of prairie to the mountains before the Lexers do. Considering that we have no idea where the Lexers are or in what direction they’re heading, it may be a stupid and insane plan. But it’s all we’ve got.

The houses are replaced by cheap motels and a few boxy buildings that housed businesses, followed by a stretch of stores with boarded windows and peeling signs. The bodies, garbage and abandoned cars make it clear this place was part of the apocalypse, but it looks as though the apocalypse began long before zombies.

Bits’s and Hank’s lips are still chocolaty from the MRE dessert they ate while I slept. I reach into one of the bags crammed by the wall. If we get separated we don’t want to be without ammo, clothing and food.

“Now eat your carrot,” I say, and hand them each one from the gardens we plundered at the Quebec Safe Zone. Their eating junk food is the least of my worries, but I figure I should say something mother-like. I pull on my boots while they crunch their carrots and then grab myself one. We don’t have much food spread between twenty people; these and the dessert were rationed for lunch.

“So, what happened while I was asleep?” I ask.

“Not surprising,” Peter says, and sits up next to me. I hand him a carrot and he chews slowly. “Any grass? I was hoping for grass.”

I smile sideways at Peter when they giggle. He looks better than he did a few hours ago and certainly better than a few minutes ago.

“How’re you feeling?” Peter asks me.

I should be the one asking that of him, except I hated when people asked me how I was after Adrian. “I’m fine.”

I’m not fine. I just have other things to worry about. Like Hank and Peter and Penny and Maureen, who’ve all lost someone they loved. I did too, but I don’t have time to mourn. I don’t
want
time to mourn. I’ve woven it into the grief I already carried instead of letting it knock me down the way it could have. Staying optimistic may be difficult, but after yesterday I’m pretty sure I can endure anything this world throws at me.

He keeps his face to the window. “Yeah.”

It could be he’s holding it together because he doesn’t have any other choice. Focusing on patrol or guard helped me to get through this summer, and now we’re on the longest patrol ever. I spent two weeks living in a tent and crying after I lost Adrian. I guess that was what can be considered a luxury these days, which is a truly depressing thought.

I eat the last of my carrot and reach for Hank’s hand. “How are you, sweetie?”

BOOK: Until the End of the World (Book 3): All the Stars in the Sky
13.03Mb size Format: txt, pdf, ePub
Read Book Download Book
ads