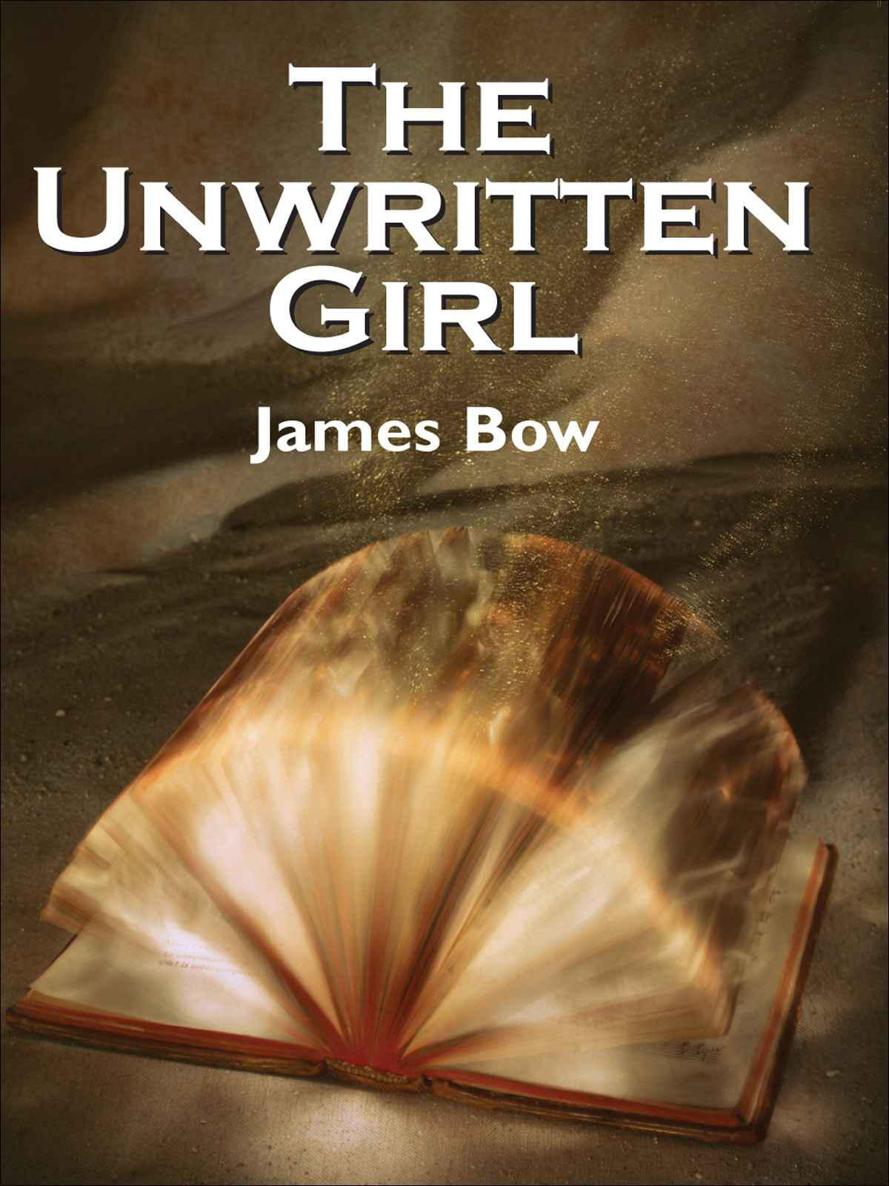 T
HE
U
NWRITTEN
G
IRL

T
HE
U
NWRITTEN
G
IRL

All rights reserved. No part of this publication may be reproduced, stored in a retrieval system,
or transmitted in any form or by any means, electronic, mechanical, photocopying, recording, or
otherwise (except for brief passages for purposes of review) without the prior permission of
Dundurn Press. Permission to photocopy should be requested from Access Copyright.

We acknowledge the support of the Canada Council for the Arts and the Ontario Arts Council for
our publishing program. We also acknowledge the financial support of the Government of Canada
through the Book Publishing Industry Development Program and The Association for the Export
of Canadian Books, and the Government of Ontario through the Ontario Book Publishers Tax
Credit program, and the Ontario Media Development Corporation.

Care has been taken to trace the ownership of copyright material used in this book. The author
and the publisher welcome any information enabling them to rectify any references or credits in
subsequent editions.

Printed and bound in Canada.
Printed on recycled paper.

Marjorie gasped. “What is this place?”

She stood, with her brother, John, and her new friend Andrew, at the base of the tallest, largest building they had ever seen. Chrome jaguars guarded the steps, frozen in mid-leap. The other buildings seemed to crowd together, pushing them up the stairs. A thousand Zeppelins patrolled the sky.

“Is this where the people went?” asked Marjorie.

That’s comforting,” deadpanned Andrew. “I think we should go now.”

“Perhaps there was some disaster,” said John. “I wonder what happened here; it’s like the
Marie Celeste
!”

“Do you wish to see the people?” The Sentinel, moving stiffly on stone joints, stepped past them and pushed open the doors.

“That walking statue is just so creepy,” said Andrew. He put his hand on Marjorie’s shoulder. “Let’s get out of here!”

“No.” Marjorie pushed her horn-rimmed glasses further up on her nose. “I want to see.”

The Sentinel ushered them forward.

They found themselves in a vast, dark cathedral. Huge marble slabs stood suspended from the ceiling, row upon row, seven feet wide and tall, and two feet thick. Some swung almost imperceptibly, as if something inside them stirred.

The rhythmic heartbeat of the city hammered off the walls, breaking their thoughts to well-ordered pieces.

“But … where are all the people?” asked Marjorie. John looked up at the slabs. His face went white. “Marjorie …”

The doors slammed behind them.

Rosemary winced. She turned the page.

Each slab held the impression of a person: here an old man with wide staring eyes, there a young woman, a child; each as different as people are from one another.

Frightened but curious, Marjorie led the way onto a moving sidewalk towards a second set of giant doors. The Sentinel pressed Andrew and John to follow her. “Ours is a powerful civilization,” he said. “We have built many wonders. But civilizations grow old, and old civilizations disappear. Knowing this, the people of this planet built the great Machine. The Machine was the pinnacle of our technology, capable of answering any question put to it and performing any action asked of it. We told it our fears and we asked it to preserve us so that our civilization would never die.”

“But I don’t understand,” said Andrew. “Where are all the people?”

The second set of doors swung open as they approached, and the heartbeat intensified. At the end of a long hall sat the Machine.

Rosemary swallowed hard. She flipped ahead.

Metal claws snaked down from the ceiling and grabbed their wrists and ankles.

The Sentinel spread its arms as if puzzled. “Why do you resist? The Machine preserves all on this planet. You are on this planet, so you must be preserved.”

“We’ve got to get out of here!” Andrew yelled.

Andrew screamed as the metal pincers wrenched him off his feet.

“Marjorie, do something!” John shouted as the claws pulled him away. There was the sound of clanging metal, the hiss of steam. Her brother’s yells ended abruptly.

“Andrew! John!” Marjorie screamed. She struggled vainly against the metal cables wrapping around her body, pulling her to the Machine. “No!”

Horrified, Rosemary threw the book across her room.

It landed with a thud, and Marjorie’s story slammed shut.

THE GIRL WHO FOLDED HERSELF

“What if we could travel at the speed of thought?”

Rosemary Watson slapped her schoolbooks down on a study cubicle. The Outsiders
has to be the most depressing book ever
, she thought
.
She pushed her fingers beneath her thick glasses and rubbed the bridge of her nose.

The school bus was late and getting later. Through the window behind her came muffled laughter and the smack of icy snowballs. Rosemary sighed and slumped in her seat.

“Really, Rosemary,” said a voice behind her. “You would think someone as bookish as you would appreciate good literature!”

She whirled around. Benson sat twisted in his seat by the study cubicle behind her, grinning.

“Don’t you have homework?” said Rosemary.

The school librarian shushed them. They looked up and caught her grim look. Benson flashed Rosemary a cheeky grin and turned back to his books.

Rosemary turned away. Benson had been imitating what Mr. Reed, her English teacher, had said when he’d discovered she was a chapter behind in her assigned reading of
The Outsiders
. The class, of course, had laughed. She hadn’t bothered to explain. She’d sat silently in her seat, her face red, feeling as though a spotlight were on her.

It had been a bad day, and her classmates weren’t about to let it end, not while everyone waited for the school buses after the first snowfall of the season. So instead of standing in the schoolyard with an invisible target pinned to her forehead, she had chosen to hide in the library, taking refuge in the
Encyclopedia Britannica
.

The school library was half the size of the public library her father managed, but at least it had encyclopedias and the smell of paper. She felt the stress of the day seeping out amongst the hushed tomes and the facts and figures. She took a deep breath and smiled.

Then she coughed. The scent of old paper was suddenly more powerful and tinged with mildew. It clung to her like cobwebs.

Rosemary stood up and looked around. The smell seemed to be coming from one of the fiction aisles. She
slipped past racks of battered paperbacks and stepped into the stacks.

A burnt-out light cast the aisle in shadow, and the shelves towered over her like a hedge maze. A girl stood where the shelves met the wall. She was flipping through a book. There was something odd about her.

Rosemary pushed her glasses further up on her nose for a better look.

The girl looked a lot like Rosemary. She was about the same age, wore glasses, and had shoulder-length brown hair. She wore a school uniform, though, and that was what made her look odd. Rosemary’s school didn’t have uniforms, and more than that, the cut of the girl’s clothes was out of date. Her glasses were horn-rimmed instead of round. It was as though she had stepped out of the 1950s, or Rosemary had stepped in.

The girl stopped paging, then turned and looked at Rosemary. Their eyes locked. The girl’s eyes were not friendly.

The girl turned towards Rosemary and disappeared.

Rosemary jumped back. The girl had not faded into nothingness, as though she were a ghost. A ghost Rosemary could handle, maybe. Instead, she had folded out of existence, growing thinner as she turned until she was a line and then nothing at all, as though she
were a piece of paper. Rosemary goggled at the empty space, and she swore it was looking back at her.

The smell of dust was so intense, Rosemary thought her throat would close. She choked.

A hand fell on her shoulder. Rosemary gasped and whirled around.

Behind her was a tall boy with a flop of light brown hair, a lot of freckles, and eyes that looked friendly, or maybe sad. He smiled at her. “Hey!”

She struggled a moment to place him, then remembered him: the new kid in English class, off to one side, neither perched near the front of the class nor hiding in the back. When the rest of the class had laughed at her, he hadn’t joined in. “You’re ...” she began.

The boy grinned ruefully and recited, “Peter. Peter McAllister, the new kid. From Toronto. The school buses are here.” He slung his backpack over his shoulder. Benson was already checking his books out.

She looked back at the aisle. The sense of being watched by empty space returned. She tried to steady her breath.

She took a step back and turned away. “It’s nothing,” she said.
It’s nothing
, she thought.
Don’t act crazy
. Leaving Peter behind, she grabbed up her backpack and her winter coat and ran for the door.