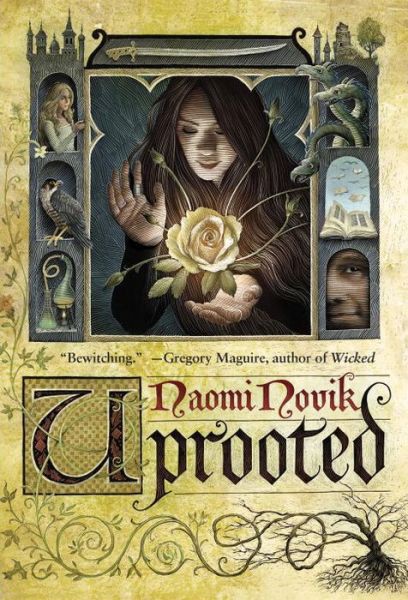 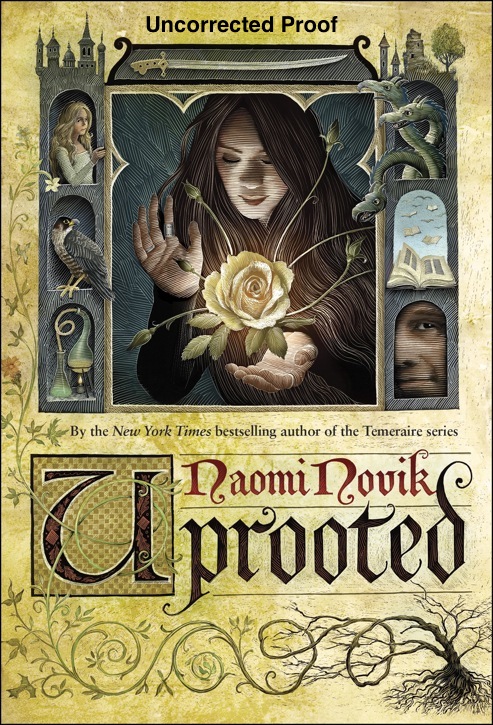 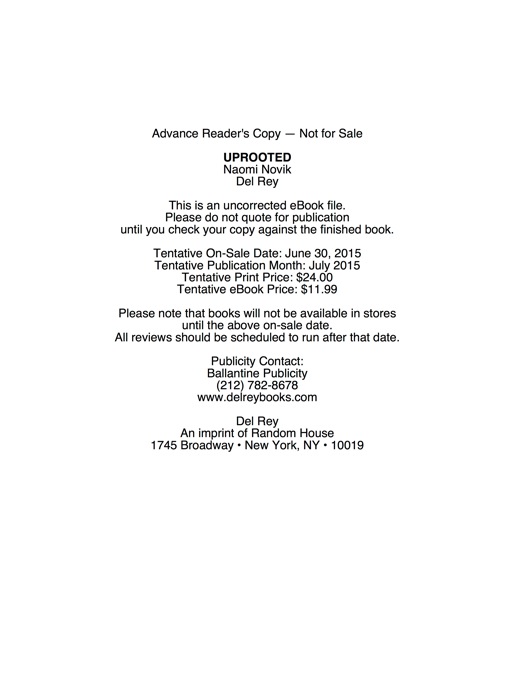 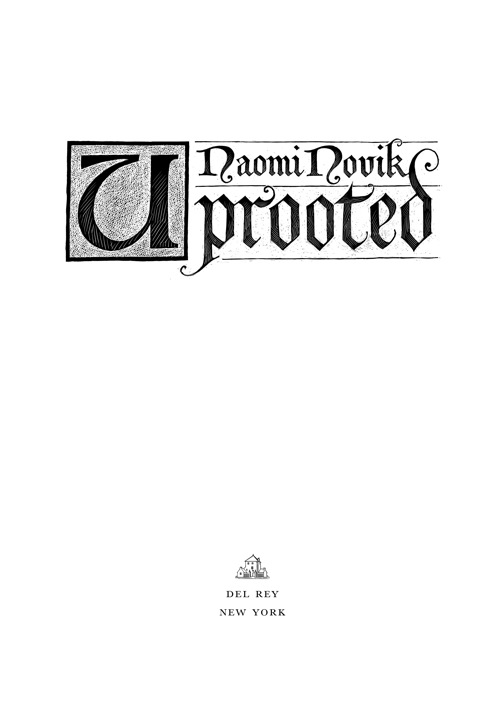 This is an uncorrected eBook file. Please do not quote for publication until you check your copy against the finished book.

Uprooted
is a work of fiction. Names, characters, places, and incidents either are the product of the author’s imagination or are used fictitiously. Any resemblance to actual persons, living or dead, events, or locales is entirely coincidental.

DEL REY and the HOUSE colophon are registered trademarks of Random House LLC.

O
ur Dragon doesn’t eat the girls he takes, no matter what stories they tell outside our valley. We hear them sometimes, from travelers passing through. They talk as though we were doing human sacrifice, and he were a real dragon. Of course that’s not true: he may be a wizard and immortal, but he’s still a man, and our fathers would band together and kill him if he wanted to eat one of us every ten years. He protects us against the Wood, and we’re grateful, but not that grateful.

He doesn’t devour them really; it only feels that way. He takes a girl to his tower, and ten years later he lets her go, but by then she’s someone different. Her clothes are too fine and she talks like a courtier and she’s been living alone with a man for ten years, so of course she’s ruined, even though the girls all say he never puts a hand on them. What else could they say? And that’s not the worst of it—after all, the Dragon gives them a purse full of silver for their dowry when he lets them go, so anyone would be happy to marry them, ruined or not.

“They forget how to live here,” my father said to me once, unexpectedly. I was riding next to him on the seat of the big empty wagon, on our way home after delivering the week’s firewood. We lived in Dvernik, which wasn’t the biggest village in the valley or the smallest, or the one nearest the Wood: we were seven miles away. The road took us up over a big hill, though, and at the top on a clear day you could see along the river all the way to the pale grey strip of burned earth at the leading edge, and the solid dark wall of trees beyond. The Dragon’s tower was a long way in the other direction, a piece of white chalk stuck in the base of the western mountains.

I was still very small—not more than five, I think. But I already knew that we didn’t talk about the Dragon, or the girls he took, so it stuck in my head when my father broke the rule.

“They remember to be afraid,” my father said. That was all. Then he clucked to the horses and they pulled on, down the hill and back into the trees.

It didn’t make much sense to me. We were all afraid of the Wood. But our valley was home. How could you leave your home? And yet the girls never came back to stay. The Dragon let them out of the tower, and they came back to their families for a little while—for a week, or sometimes a month, never much more. Then they took their dowry-silver and left. Mostly they would go to Kralia and go to the University. Often as not they married some city man, and otherwise they became scholars or shopkeepers, although some people did whisper about Jadwiga Bach, who’d been taken sixty years ago, that she became a courtesan and the mistress of a baron and a duke. But by the time I was born, she was just a rich old woman who sent splendid presents to all her grand-nieces and nephews, and never came for a visit.

So that’s hardly like handing your daughter over to be eaten, but it’s not a happy thing, either. There aren’t so many villages in the valley that the chances are very low—he takes only a girl of seventeen, born between one October and the next. There were eleven girls to choose from in my year, and that’s worse odds than dice. Everyone says you love a Dragon-born girl differently as she gets older; you can’t help it, knowing you so easily might lose her. But it wasn’t like that for me, for my parents. By the time I was old enough to understand that I might be taken, we all knew he would take Kasia.

Only travelers passing through, who didn’t know, ever complimented Kasia’s parents or told them how beautiful their daughter was, or how clever, or how nice. The Dragon didn’t always take the prettiest girl, but he always took the most special one, somehow: if there was one girl who was far and away the prettiest, or the most bright, or the best dancer, or especially kind, somehow he always picked her out, even though he scarcely exchanged a word with the girls before he made his choice.

And Kasia was all those things. She had thick wheat-golden hair that she kept in a braid to her waist, and her eyes were warm brown, and her laugh was like a song that made you want to sing it. She thought of all the best games, and could make up stories and new dances out of her head; she could cook fit for a feast, and when she spun the wool from her father’s sheep, the thread came off the wheel smooth and even without a single knot or snarl.

I know I’m making her sound like something out of a story. But it was the other way around. When my mother told me stories about the spinning princess or the brave goose-girl or the river-maiden, in my head I imagined them all a little like Kasia; that was how I thought of her. And I wasn’t old enough to be wise, so I loved her more, not less, because I knew she would be taken from me soon.

She didn’t mind it, she said. She was fearless, too: her mother Wensa saw to that. “She’ll have to be brave,” I remember hearing her say to my mother once, while she prodded Kasia to climb a tree she’d hung back from, and my mother hugging her, with tears.

We lived only three houses from one another, and I didn’t have a sister of my own, only three brothers much older than me. Kasia was my dearest. We played together from our cradles, first in our mothers’ kitchens keeping out from underfoot and then in the streets before our houses, until we were old enough to go running wild in the woods. I never wanted to be anywhere inside when we could be running hand-in-hand beneath the branches. I imagined the trees bending their arms down to shelter us. I didn’t know how I would bear it, when the Dragon took her.