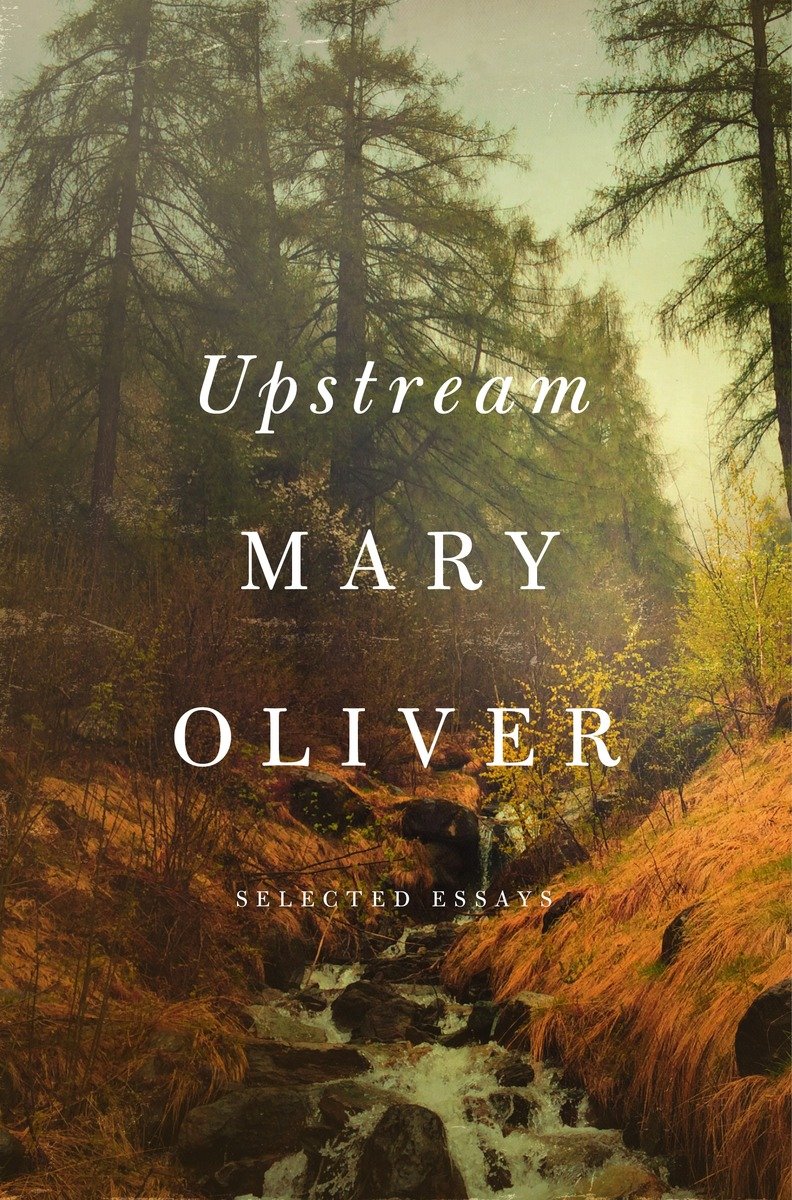 New and Selected Poems, Volume One

The Leaf and the Cloud

What Do We Know

Why I Wake Early 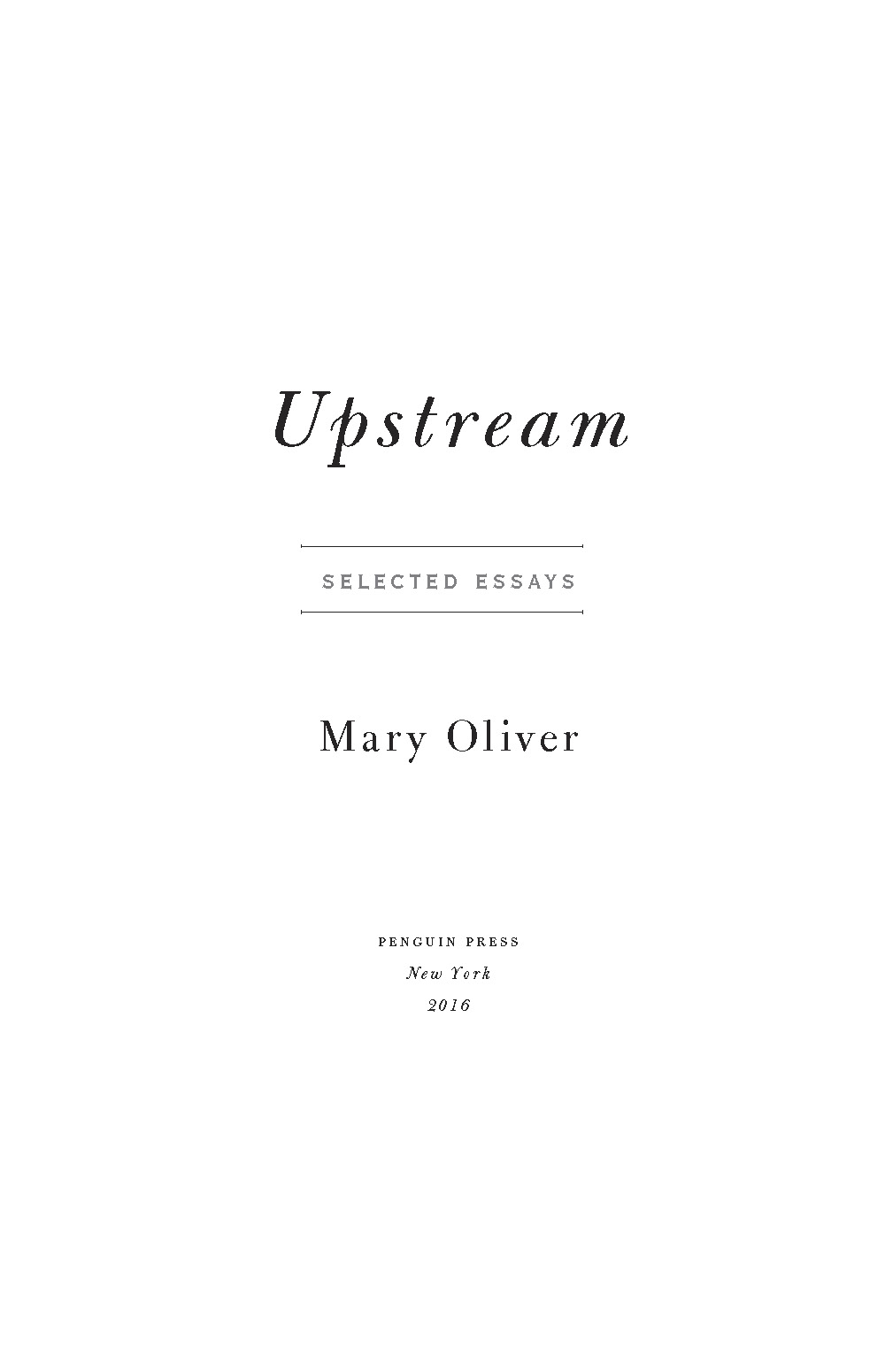 The
Acknowledgments
constitute an extension of this copyright page.

OF POWER AND TIME

THE BRIGHT EYES OF ELEONORA: POE'S DREAM OF RECAPTURING THE IMPOSSIBLE

SOME THOUGHTS ON WHITMAN

.Â .Â .Â in solitude, or in that deserted state when we are surrounded by human beings and yet they sympathise not with us, we love the flowers, the grass and the waters and the sky. In the motion of the very leaves of spring in the blue air there is then found a secret correspondence with our heart.

One tree is like another tree, but not too much. One tulip is like the next tulip, but not altogether. More or less like peopleâa general outline, then the stunning individual strokes. Hello Tom, hello Andy. Hello Archibald Violet, and Clarissa Bluebell. Hello Lilian Willow, and Noah, the oak tree I have hugged and kissed every first day of spring for the last thirty years. And in reply its thousands of leaves tremble! What a life is ours!
Doesn't anybody in the world anymore want to get up in the

middle of the night and
sing?

In the beginning I was so young and such a stranger to myself I hardly existed. I had to go out into the world
and see it and hear it and react to it, before I knew at all who I was, what I was, what I wanted to be. Wordsworth studied himself and found the subject astonishing. Actually what he studied was his relationship to the harmonies and also the discords of the natural world. That's what created the excitement.

I walk, all day, across the heaven-verging field.

And whoever thinks these are worthy, breathy words I am writing down is kind. Writing is neither vibrant life nor docile artifact but a text that would put all its money on the hope of suggestion.
Come with me into the field of sunflowers
is a better line than anything you will find here, and the sunflowers themselves far more wonderful than any words about them.

I walked, all one spring day, upstream, sometimes in the midst of the ripples, sometimes along the shore. My company were violets, Dutchman's-breeches, spring beauties, trilliums, bloodroot, ferns rising so curled one could feel the upward push of the delicate hairs upon their bodies. My parents were downstream, not far away, then
farther away because I was walking the wrong way, upstream instead of downstream. Finally I was advertised on the hotline of help, and yet there I was, slopping along happily in the stream's coolness. So maybe it was the right way after all. If this was lost, let us all be lost always. The beech leaves were just slipping their copper coats; pale green and quivering they arrived into the year. My heart opened, and opened again. The water pushed against my effort, then its glassy permission to step ahead touched my ankles. The sense of going toward the source.

I do not think that I ever, in fact, returned home.

Do you think there is anything not attached by its unbreakable cord to everything else? Plant your peas and your corn in the field when the moon is full, or risk failure. This has been understood since planting began. The attention of the seed to the draw of the moon is, I suppose, measurable, like the tilt of the planet. Or, maybe notâmaybe you have to add some immeasurable ingredient made of the hour, the singular field, the hand of the sower.

It lives in my imagination strongly that the black oak is pleased to be a black oak. I mean all of them, but in
particular one tree that leads me into Blackwater, that is as shapely as a flower, that I have often hugged and put my lips to. Maybe it is a hundred years old. And who knows what it dreamed of in the first springs of its life, escaping the cottontail's teeth and everything dangerous else. Who knows when supreme patience took hold, and the wind's wandering among its leaves was enough of motion, of travel.

When the chesty, fierce-furred bear becomes sick he travels the mountainsides and the fields, searching for certain grasses, flowers, leaves and herbs, that hold within themselves the power of healing. He eats, he grows stronger. Could you, oh clever one, do this? Do you know anything about where you live, what it offers? Have you ever said, “Sir Bear, teach me. I am a customer of death coming, and would give you a pot of honey and my house on the western hills to know what you know.”

After the waterthrush there was only silence.

Understand from the first this certainty. Butterflies don't write books, neither do lilies or violets. Which doesn't mean they don't know, in their own way, what they are. That they don't know they are aliveâthat they don't
feel
, that action upon which all consciousness sits, lightly or heavily. Humility is the prize of the leaf-world. Vainglory is the bane of us, the humans.

Sometimes the desire to be lost again, as long ago, comes over me like a vapor. With growth into adulthood, responsibilities claimed me, so many heavy coats. I didn't choose them, I don't fault them, but it took time to reject them. Now in the spring I kneel, I put my face into the packets of violets, the dampness, the freshness, the sense of ever-ness. Something is wrong, I know it, if I don't keep my attention on eternity. May I be the tiniest nail in the house of the universe, tiny but useful. May I stay forever in the stream. May I look down upon the windflower and the bull thistle and the coreopsis with the greatest respect.

Teach the children. We don't matter so much, but the children do. Show them daisies and the pale hepatica. Teach them the taste of sassafras and wintergreen. The lives of the blue sailors, mallow, sunbursts, the moccasin flowers. And the frisky onesâinkberry, lamb's-quarters, blueberries. And the aromatic onesârosemary, oregano. Give them peppermint to put in their pockets as they go to school. Give them the fields and the woods and the possibility of the world salvaged from the lords of profit. Stand them in the stream, head them upstream, rejoice as they learn to love this green space they live in, its sticks and leaves and then the silent, beautiful blossoms.

Attention is the beginning of devotion.

In Ohio, in the 1950s, I had a few friends who kept me sane, alert, and loyal to my own best and wildest inclinations. My town was no more or less congenial to the fact of poetry than any other small town in AmericaâI make no special case of a solitary childhood. Estrangement from the mainstream of that time and place was an unavoidable precondition, no doubt, to the life I was choosing from among all the lives possible to me.

I never met any of my friends, of course, in a usual wayâthey were strangers, and lived only in their writings. But if they were only shadow-companions, still they were constant, and powerful, and amazing. That is, they said amazing things, and for me it changed the world.

This hour I tell things in confidence,

I might not tell everybody but I will tell you.

Whitman was the brother I did not have. I did have an uncle, whom I loved, but he killed himself one rainy fall day; Whitman remained, perhaps more avuncular for the loss of the other. He was the gypsy boy my sister and I went off with into the far fields beyond the town, with our pony, to gather strawberries. The boy from Romania moved away; Whitman shone on in the twilight of my room, which was growing busy with books, and notebooks, and muddy boots, and my grandfather's old Underwood typewriter.

My voice goes after what my eyes cannot reach,

With the twirl of my tongue I encompass worlds and volumes of worlds.

When the high school I went to experienced a crisis of delinquent student behavior, my response was to start out for school every morning but to turn most mornings into the woods instead, with a knapsack of books. Always Whitman's was among them. My truancy was extreme, and my parents were warned that I might not graduate. For whatever reason, they let me continue to go my own way. It was an odd blessing, but a blessing all the same. Down by the creek, or in the wide pastures I could still find on the other side of the deep woods, I
spent my time with my friend: my brother, my uncle, my best teacher.

The moth and the fisheggs are in their place,

The suns I see and the suns I cannot see are in their place,

Thus Whitman's poems stood before me like a model of delivery when I began to write poems myself: I mean the oceanic power and rumble that travels through a Whitman poemâthe incantatory syntax, the boundless affirmation. In those years, truth was elusiveâas was my own faith that I could recognize and contain it. Whitman kept me from the swamps of a worse uncertainty, and I lived many hours within the lit circle of his certainty, and his bravado.
Unscrew the
locks from the doors! Unscrew the doors themselves from their
jambs!
And there was the passion which he invested in the poems. The metaphysical curiosity! The oracular tenderness with which he viewed the worldâits roughness, its differences, the stars, the spiderânothing was outside the range of his interest. I reveled in the specificity of his words. And his faithâthat kept my spirit buoyant surely, though his faith was
without a name that I ever heard of.
Do you guess I
have some intricate purpose? Well I haveÂ .Â .Â . for the
April rain has, and the mica on the side of a rock has.

But first and foremost, I learned from Whitman that the poem is a templeâor a green fieldâa place to enter, and in which to feel. Only in a secondary way is it an intellectual thingâan artifact, a moment of seemly and robust wordinessâwonderful as that part of it is. I learned that the poem was made not just to exist, but to speakâto be company. It was everything that was needed, when everything was needed. I remember the delicate, rumpled way into the woods, and the weight of the books in my pack. I remember the rambling, and the loafingâthe wonderful days when, with Whitman,
I tucked my trowser-ends in my boots and went and had a good time.