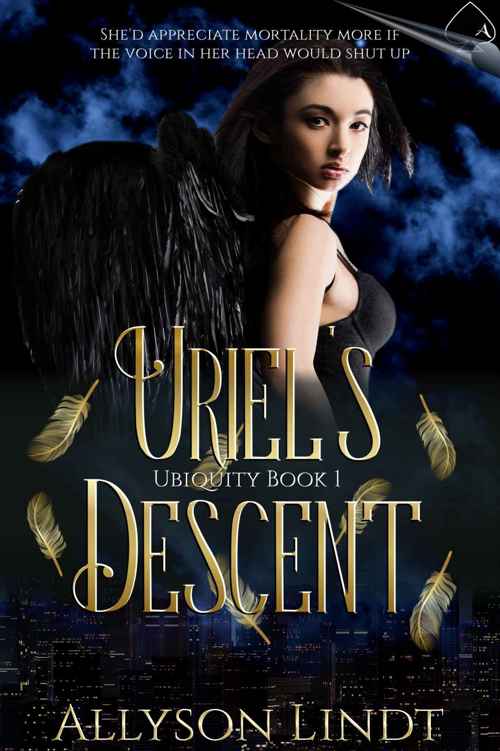 While reference might be made to actual historical events or existing locations, the names, characters, places and incidents are either the product of the author’s imagination or are used fictitiously, and any resemblance to actual persons, living or dead, business establishments, events, or locales is entirely coincidental.

No part of this publication may be reproduced, stored in a retrieval system, or transmitted in any form or by any means, electronic, mechanical, recording or otherwise, without the prior written permission of the author.

Any entry-level angel or demon would sell their soul for Ronnie’s job—retrieval analyst for the largest search engine in the world. Ubiquity is a joint initiative between heaven and hell. Because what better way to track all of humanity’s secrets, both good and bad, than direct access to their web browsing habits?

She might appreciate the position a little more if: a) she could remember anything about her life before she started working at Ubiquity, b) the damned voice in her head would just shut up already, and c) her boss weren’t a complete control freak.

On top of that, her best friends are acting strange—researching coconuts in Fiji? Her mentor, Lucifer, is acting cryptic—more so than normal. And the two most powerful angels in history are there whenever she turns around—Gabriel seducing her, and Michael pushing her away. Worse, Ronnie’s in danger of falling for Michael. Not a good idea…
because demons and angels don’t date.

Ronnie’s struggling to keep her sanity and job, while stopping the voice in her head from stealing her life. She almost misses the boredom of retrieval analysis at Ubiquity.

For my eternal dragon

Home again.
Michael almost laughed at the thought. His colleagues called heaven or hell home. His was Franklin, Tennessee.

He stepped through the glass door labeled
First Angelic Non-Denominational Church of Faith.
Few times in history was something more appropriately titled. A deep sense of serenity settled over him the moment he was inside. A place like this held its own power, granted by occupants’ belief and faith, rather than just recited words from a page.

Another day, he would have taken a seat in the chapel and reveled in the peace. More important things waited. Critical, if he understood correctly. He took the stairs to the right and headed up. On the second floor, he knocked on the apartment door.

The man who answered emanated a faint glow. It wasn’t as bright as one hundred years ago, but an aura dimmed and eventually vanished when an agent of heaven or hell fell. Fortunately for Izrafel, his descent was by choice.

“I’m glad you could make it.” Izrafel opened the door wider.

“I’m sorry I took so long. I was in Tibet when I got your email.”

“Clearing your mind of decades’ worth of thoughts?”

Michael should do that sooner, rather than later. “More like helping a monk find inner peace.” Izrafel would know he meant literally. Michael coached him through the same thing many years back, and it was why he was here now.

“This is Toby.” Izrafel nodded to a young man pacing near the window. Even in streaming daylight, the guy shimmered like a string of multi-colored Christmas tree lights refracted through crystal.

Toby whirled fast and teetered before holding onto a stack of books. His eyes grew wide when he saw Michael. “Whoa, you glow too.” He stumbled forward, hand outstretched. “Pretty.”

Izrafel stepped between them, wrapped an arm around Toby’s waist, and then tugged him to sit on the couch. “We met in a bar. Had more in common than our preference in men.”

Toby wore an aura that sparked and hummed in an impressive light show. Then there was his childlike fascination with everything in reach. Michael had no doubt. Like Izrafel, a cherub shared the man’s body. Toby’s confusion made it seem as though his hitchhiker wasn’t intentional.

“Oh, wait.” Toby trailed his fingers over the fabric on the lumpy sofa, stroking, as if every pass was a new experience. “You’re the guy who can tell me what’s going on, right?”

Michael kneeled in front of him. “That’s me. What do you know so far?”

Toby met his gaze for the first time, and terror replaced awe. His aura spiked, jagged shards of color, and he scrambled back on the cushion, pulling his knees up close to his chest. The ethereal scent of cotton candy filled the air. “Don’t send me back. Please. I like it here. It’s nice. Don’t make me go.” He used his hands and heels to scoot away from Michael in tiny, slow movements.

Michael knew that was the cherub talking. He shot his hand out and grabbed Toby’s wrist to stop him from crawling too far. At the same time, he let just enough power flow through him to calm the man. Boy? This guy was barely twenty-five. Izrafel was picking them up young. But it wasn’t Michael’s place to judge.

“Toby.” Michael forced strength into his words. “I need you here.”

The flare around the man died a little, and Toby’s pupils shrank to a normal size. “Yeah. That’s me. Izzy said I was possessed. I don’t believe in that God shit. Are you a priest?”

“Not quite.” Michael kept a tight grip, trying to strike a balance between holding the man captive and not hurting him.

Michael could give him honesty. The cherub sharing Toby’s body should have popped into existence in heaven or hell and begun its life serving demons or angels. If that happened, it would have fulfilled its purpose until it earned the right to a name and became a full-fledged agent. Instead, it appeared on Earth, a place where nothing could survive without a physical form for long, and sought the first available option for survival.

The concept was hard to grasp for someone in full control of their senses. He wouldn’t make Toby struggle through an explanation, given the man’s state of mind. “You have an angel living in you.” Michael might as well go with the possession approach. They’d established Toby was familiar with the concept.

Heat pulsed through Michael’s hand where he held Toby’s wrist, and Michael pushed another calming wave into Toby. “You know something’s in you, is that true?”

“What do
you
think it is?” This was always the difficult part of an evaluation. Michael needed to determine if the host and cherub were happy together or should be separated. The former created someone like Izrafel. At peace with themselves and somewhere on the power scale between a human and an angel. The latter was more likely and far more painful to the host.

“I don’t know. But I want it gone. Am I stoned? Did someone slip me something?” Toby’s pupils dilated. “Don’t send me back. Please. The bar was fun. The people were friendly. I got laid. Have you ever gotten laid?
Wow
.” That would be the cherub again.

“
Toby.
” Michael hated to use heavy levels of power on a mortal. Their bodies weren’t built for it. “Do you want it gone?”

“It’s going to hurt.” Michael used to tell them it would be fine and they wouldn’t feel a thing. After sitting through a couple of hosts screaming in agony, he decided honesty was a better route.

Michael nodded at Izrafel, who took Toby’s other hand and stroked his thumb over the man’s knuckles.

“Look at me.” Izrafel’s voice was calm. “Don’t pay any attention to him. I’m here, all right?”

Michael drew in a deep breath and mentally tugged on the ethereal threads running through Toby’s body. Best to do it fast, like ripping off a bandage. He yanked.

Toby’s scream filled the room and shook the windows. The rainbow around him danced and splintered. He jerked to get away, but Izrafel and Michael held him tight.

Michael hated this part. It seemed to stretch on and on but in reality, only took a second or two. Silence crashed over the room as Michael sent the cherub to heaven, so it could start life properly. In a few months, or years, it would earn the right to shift to a physical form, and then it could come back here as its assignments allowed and enjoy getting laid on its own time.

Toby collapsed back against the couch, unconscious, and Michael sank back onto the carpet. “He’ll be out for a little while, but he’s going to have a hell of a headache when he wakes up.”

Izrafel raked his fingers through his hair. “So that’s what it’s like when it doesn’t work out. That sucks.”

“At least he found you before someone from Ubiquity got to him.”

“About that.” As Izrafel spoke, he moved to the kitchen to grab a glass of water and a bottle of pills, and then brought them back to sit on the end table.

“Nope.” Michael would rather take a few minutes to collect his wits before moving on, but that was his cue to leave. “I don’t want to hear it.” When it came to anything to do with the mockery of a joint initiative heaven and hell called Ubiquity, Michael’s favorite spot to be was anywhere else.

“You want to hear this.”

If he left now, Michael could catch the next flight out of here. Another agent might phase across the ocean in a blink. He preferred his physical form, and enjoyed human modes of transportation, when possible. There were rumors of a witch doctor in Peru who performed actual magic. Something in Izrafel’s tone made him hesitate. “What is it?” Michael suspected he’d regret asking.

“They’ve got one there.”

“One…what?” The place was teaming with demons and angels. All cherubs at one time, they earned their names. Their right to come to Earth.

Izrafel nodded at Toby. “One of those. Fractured aura, the whole deal. Except she’s different.”

“You want the list? She came from hell, and she knows it. As in she’s a demon, present tense—name’s Uriel. Lucifer pulled strings to get her a retrieval analyst job. She doesn’t remember who she is or anything before she got to Earth. Oh, and she doesn’t have any idea she’s carrying a passenger.”

Fuck.
That sounded bad. “You know her?”

“Yup. Wandered into my church a couple months back. Absolutely a blast to talk to.”

“Why haven’t you told her?”

Izrafel fiddled with the fringe on the edge of a couch cushion. “I want to, but I wasn’t sure if I should. Right now, she’s not hurting anyone, you know, the way it should be, and if she’s a project of Lucifer’s…”

Izrafel needed to keep a low profile. Hanging onto a cherub wasn’t exactly sanctioned, and Michael helped anyone he reformed lay low. Going toe-to-toe with an original like Lucifer was the opposite of keeping one’s head down.

“I’ll look into it,” Michael said.

“Be careful with her? She doesn’t have the same lust for power and deception that a lot of them over there suffer from. She deserves better.”

Michael couldn’t make any promises, so he kept his mouth shut and gave Izrafel a thin smile.

Redoubtable by Mike Shepherd
Babylon by Richard Calder
The Amazing Flight of Darius Frobisher by Bill Harley
HIS Choice: An H.I.S. Novel (H.I.S. series Book 2) by Sheila Kell
Dirty Rotten Scoundrel by Liliana Hart
Taken by the Wicked Rake by Christine Merrill
Unforgiven (The Forbidden Bond 2) by Cat Miller
The Butcher Beyond by Sally Spencer
Pandora: A Novel of the Zombie Apocalypse by McCrohan, Richard
Dial M for Murdoch: News Corporation and the Corruption of Britain by Tom Watson
Our partner