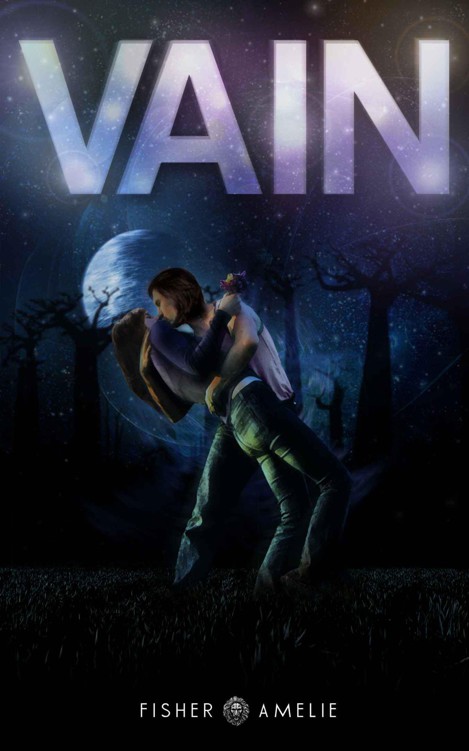 All rights reserved. Except as permitted under the U.S. Copyright Act of 1976, no part of this publication may be reproduced, distributed, or transmitted in any form or by any means, or stored in a database or retrieval system without the prior written permission of Fisher Amelie.

You lived the kind of life we are all meant to live.

You took your hands and dug them in the dirt. You knew that serving others was your calling and you answered with a resounding and immediate yes, devoid of doubt, devoid of “
what-if’s”. I was blessed to know you, to call you dad...
And we’ll miss you more than you could possibly imagine.
P.s. Pura Vida!

Vanity’s a debilitating affliction. You’re so absorbed in yourself it’s impossible to love anyone
other
than oneself, leaving you weak without realization of it. It’s quite sad. You’ve no idea what you’re missing either. You will never know real love and your life will pass you by.
But you will see.
One day you will blink and the haze will dissipate. You’ll discover that what once defined you has wilted into graying hair and wrinkled skin. Frantic, you’ll glance around yourself, in hopes of finding those you swore adored you, but all you will find is empty picture frames.

Six weeks after graduation and Jerrick had been dead for three of them. You’d have thought it would’ve been enough for us all to take a breather from our
habits
, but it wasn’t.
I bent to snort the line of coke in front of me.
“Brent looks very tempting tonight, doesn’t he?” I asked Savannah, or Sav as I called her for short, when I lifted my head and wiped my nose.
Savannah turned her glassy eyes away from her Special K laced O.J., her head wavering from side to side. “Yeah,” she lazily slurred out, “he looks hot tonight.” Her glazed eyes perked up a bit but barely. “Why?”
“I’m thinking about saying hello to him.” I smiled wickedly at my pseudo-best friend and she smiled deviously back.
“You’re such a bitch,” she teased, prodding my tanned leg with her perfectly manicured nail. “Ali will never forgive you for it.”
“Yes, she will,” I said, standing and smoothing out my pencil skirt.

I could’ve been considered a dichotomy of dressers. I never showed much in the way of skin because, well, my father would have killed me, but that didn’t stop me from choosing pieces that kept the boys’ tongues wagging. For instance, everything I owned was skin tight because I had the body for it, and because it
always
got me what I wanted. I loved the way the boys stared. I loved the way they wanted me. It felt powerful.

“How do you know?” Sav asked, her head heavily lolling back and forth on the back of the leather settee in her father’s office.

No one was allowed in that room, party or no, but we didn’t care.
Sav’s parents went to Italy on a whim, leaving her house as the inevitable destination for that weekend’s “Hole,” as we called them. The Hole was code for wherever we decided to “hole up” for the weekend. My group of friends was, at the risk of sounding garish, wealthy. That’s an understatement. We were filthy, as we liked to tease one another, double meaning and all. Someone’s house was always open some random weekend because all our parents traveled frequently, mine especially. In fact, almost every other weekend, the party was at my home. This isn’t why I ruled the roost, so to speak. It wasn’t even because I was the wealthiest. My dad was only number four on that list. No, I ruled because I was the hottest.

You see, I’m one of the beautiful people. That truly sounds so odd to have to explain, but it’s the truth nonetheless. I’m beautiful, and it’s not because I have a healthy dose of self-esteem, though I have plenty of that. It’s obvious in the way I look in the mirror, yes, but even more obvious in the way everyone treats me. I rule this roost because I’m the most wanted by all the guys, and all the
girls
want to be my friend
because of it.

“How do you
know
?” she asked again, agitated I hadn’t yet answered.

This made my blood boil. “Stuff it,
Sav,” I ordered. She’d forgotten who I was and I needed to remind her.

“Sorry,” she said sheepishly, shrinking slightly into herself.

“I
know
because they always do. Besides, when I’m done with their boys, I give them back. They consider it their dues.”

“Trust me,” she said quietly toward the wall, “they do not consider it their dues.”

“Is this about Brock, Sav?” I huffed. “God, you are such a whiny brat. If he was willing to cheat on you so easily, he wasn’t worth it. Consider it a favor.”

“You’re welcome, Sav,” I replied sweetly and patted her head. “Now, I’m off to find Brent.”

I stood in front of the mirror above her dad’s desk and inspected myself.

Long, silky, straight brown hair down to my elbows. I had natural blonde highlights throughout its mass. I’d recently cut my bangs so that they fell straight across my forehead. I ruffled them so they lay softly over my brows. I studied them and felt my blood begin to boil. The majority of girls at Jerrick’s funeral suddenly had the same cut and it royally pissed me off.
God! Get a clue, nimrods. You’ll never look like me!
I puckered my lips and applied a little gloss over them. My lips were full and pink enough that I didn’t need much color. My skin was tanned from lying by the pool too much after graduation, and I’d made a mental note to keep myself indoors for a bit.
Don’t need wrinkles, Soph
. My light gold eyes were the color of amber and were perfect, but I noticed my lashes needed a touch more mascara. I did this only to darken them up a bit, not because they weren’t long enough. Like I said, I was practically flawless.

“He won’t know what hit him,” I told myself in the mirror.
Sav mistook this for speaking to her and I rolled my eyes when she responded.

“I know,” I admitted, turning her direction, a fiendish expression on my unblemished face.

I sauntered from the room. As I passed the throngs of people lined against the sides of the hall that lead from the foyer to the massive den, I received the customary catcalls and ignored them with all the flirtatious charm that was my forte. I was the queen of subtlety. I could play a boy like a concert violinist. I was a master of my craft.

“Can I get you boys anything?” I asked as I approached the elite group of hotties that included Ali’s Brent.

“I’m fine, baby,” Graham flirted, as if I’d
ever
give him the time of day.

“You look it,” I flirted back, just stifling the urge to roll my eyes.

“Since you’re offering so nicely, Soph,” Spencer said, “I believe we could all use a fresh round.”

“But of course,” I said, curtsying lightly and smiling seductively. I purposely turned to make my way toward the bar. I did this for two reasons. One, to make them all
look at my ass. Two, to make them believe I’d only just thought of the next move on my playing board. I turned around quickly and caught them all staring, especially Brent.
Bingo
. “I’ll need some help carrying them all back,” I pouted.