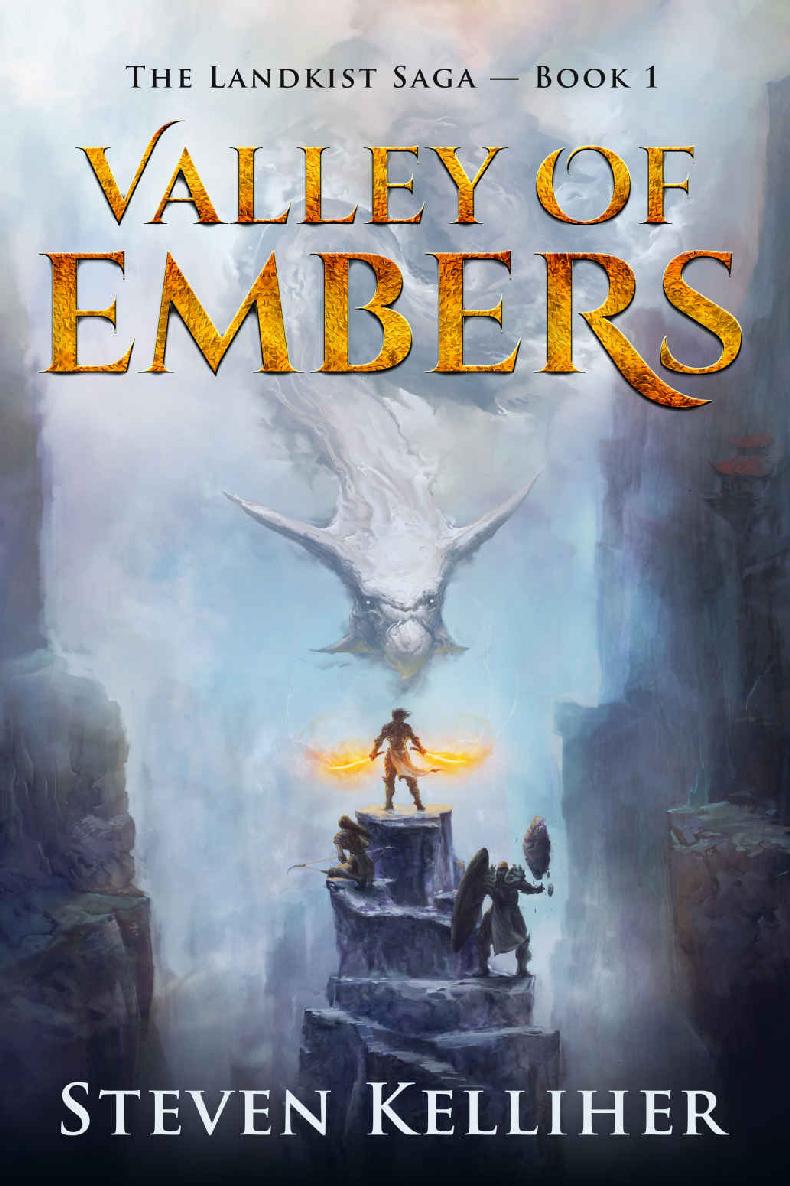 Chapter One: A Good Scar

Chapter Six: Down Among the Roots

Chapter Twenty-three: The Fires of Hate

Chapter Twenty-four: A Light in the Dark

Chapter Twenty-six: Drums in the Deep

Chapter Thirty-seven: Legacy of the Flame 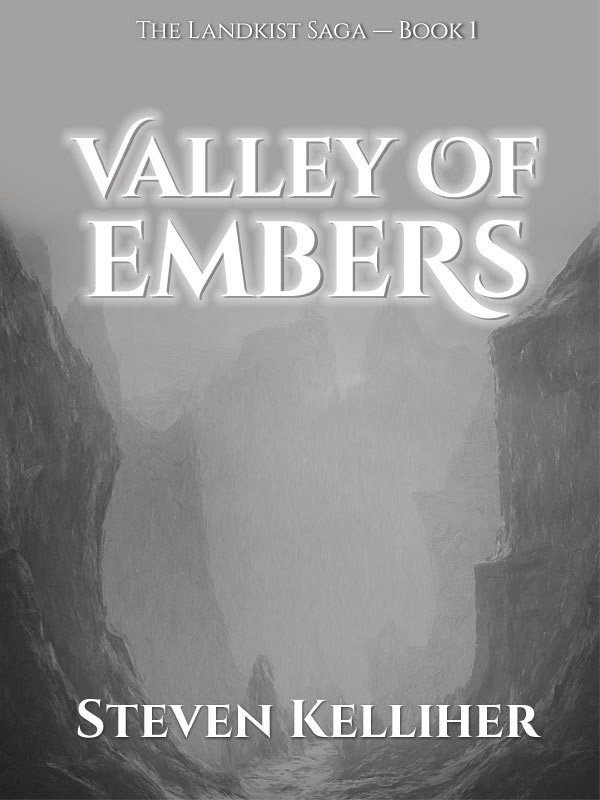 For David, for showing me that reading is pretty great. Also dragons. Those are great too.

For Mom and Dad, for believing I could do anything.

For Krysten, for being my light in the dark.

K
ole was as calm as he could be, waiting on the edge of nightmare.

The tiniest sliver of orange and gold could just be seen peeking up through the depths as the sun fought to carve out a horizon. He watched from his perch on the roof as the distant disc turned pale and dissolved into the waves, leaving nothing but its trailing rays to light the gloomy ridges that ringed Last Lake.

Dark as it might be, the presence of any sort of light was a comfort as the Dark Months neared their end. Soon enough, Kole knew, the sliver would become a crest that would rise over white-capped waves, and soon after that, the sun would grow by half on its way to a perfect whole. The Valley would know peace for another season, its protectors respite, however temporary.

“You’d think you were willing it to rise, the way you stare.”

Kole looked down to see Linn latching the door to the house she shared with her sister. She laced up her boots and stretched, sinews casting shadows along the skin of her shoulders and back.

“Rises higher each day,” Kole said. He put some heat into his legs and hopped down, landing light as a feather despite the two-story drop to the road below.

“Might be something to it, then,” Linn said with a wink.

“Might be,” Kole said. “Though, if any eyes in the Valley could compel something grand as the sun, I’d guess them to be yours.”

“So serious,” Linn said, looping a bow that stood as tall as her around her back. “Shall we?”

Linn moved off toward the north, Kole following with a resigned sigh.

“Nothing ever comes of these meetings,” he complained.

“Then why does Tu’Ren insist?”

“The First Keeper may be the only man in the Valley more serious about his duties than you.”

“The Dark Kind will come as they always do,” Kole said. “And we’ll beat them back, as we always do.”

“Plenty to be said about keeping to a routine.”

“I’d imagine the meetings are less about you Embers and more about keeping the rest of us vigilant,” she said after a time, and Kole did not argue. He knew the folk of Last Lake considered the Embers their true protectors. The flame-wielding Landkist of the Valley certainly did their share against the horrors of the night, but so, too, did warriors like Linn Ve’Ran. Kole would put her at his back before any other, Ember or not.

Kole still remembered the terror he had felt upon first contact with the Dark Kind. How strange, that such things could become rote.

The Emberfolk had lost many in that first year, but it had been some time since they had lost any. Kole was determined to keep it that way.

The streets turned from dirt to gravel the further they got from the shore. They walked uphill, passing around the choked alleys of the market, which was already bustling, and set a path toward the gate. Kole could see the timbers frame the gray horizon to the north.

The cozy homes along the southern bowl gave way to plainer buildings as the ground leveled off. They passed the kennels and Kole made a mental note to bring a carrot for Shifa on his way back. The armory loomed to their left and the gatehouse straight ahead. A young man with light hair turned to regard them as he ushered a young woman inside.

“Always putting on a show,” Linn said under her breath as she waved to Jenk Ganmeer. Kole did not know why she held such disdain for the Ember. Then again, he did not count Jenk among his favorites or his friends. Still, he was good with the flame. When you stood against the creatures they did, that was enough to make a relationship worthwhile.

Jenk held the door open for them and Kole nodded to him as he stole into the cramped quarters.

The gathering was all here: the Ember Keepers and non-Landkist besides, all of them chief defenders of Last Lake. First Keeper Tu’Ren busied himself over the kindling in the stone hearth as the rest watched, Kaya Ferrahl shaking her head with a sigh and earning a sharp glare from Second Keeper Larren Holspahr, who rested alongside his spear against the far window. Jenk closed the door behind him and sidled up next to Kaya, while Taei and Fihn Kane stood with arms crossed, the former looking aloof, the latter annoyed.

Once Tu’Ren had the pine arranged to his liking, he set to striking the flint, blowing softly to coax the sparks to life. Kole watched in silent fascination. The rest of the Embers present—himself included—would have used the fire in their blood to ignite the blaze. But Tu’Ren Kadeh always built his fires the old way. It said something about the man. Exactly what, Kole was not one for guessing.

With the flames licking eagerly at the white wood, Tu’Ren stood and turned to regard them.

“We’ve had reports from the Runners.”

“How many this time?” Kaya asked.

Tu’Ren turned his eyes on Kole.

“That’s just the thing. There’s no sign of the Dark Kind. None. Karin doesn’t like it. And if he doesn’t like a thing, I certainly don’t.”

Kole swallowed. His father was First Runner of Last Lake for a reason. If he could not get a bead on the movements of the Dark Kind, no one could.

“Maybe we burned them out on the last attack,” Jenk offered. He snapped, calling up a small flame between thumb and forefinger that had Linn scoffing.

“Our timber walls are easier prey than the stone of our cousins to the north.”

“So,” Fihn put in, “what are we on about, then? Either they come or they do not.” She shot a withering look at Jenk, who doused his flame. “If they do, I’d suggest you save your precious fire, Ember.”

Kaya did the bristling for Jenk, who merely laughed off the insult. Taei smirked at his sister’s slight. It was one of the great ironies, that he had been Landkist when Fihn had not. What fire she lacked in her blood she more than made up for in disposition.

“Now, then,” Tu’Ren said, drawing them back in. “Could be nothing. Could be something trying to look like nothing. Never any harm in being prepared. Larren?”

The Second Keeper took the floor, and even those among them that had arrived slouched and grumbling perked up as he went over the formations.

Kole woke to the steady beat of drums. The booming percussions were amplified by the timber walls of his home, acquiring a wavering quality as they crept in through thatch and shingle.

He went first to his leather armor, which soaked in oil water. He looped an Ash bow over his back, strapped on his water skin and drew his blades. The Everwood knives were black with old char.

When he opened the door, the steady bass of drums cleared, their sharp retorts ringing and now intermingled with the baying of the wall hounds. Kole picked out the steady baritone of the First Keeper as he issued orders in a staccato rhythm at odds with the chaos of the night, the rain adding its own crescendo to the familiar proceedings.

A small slope of packed earth separated Kole’s quarters from the front gate. As he moved off, boots finding purchase difficult in the muck, he heard panic issuing from the merchant sector. He knew there was no such sound further south, where the children would be ushered into the Long Hall.

Everyone, it seemed, was heading south, toward the Shore of Last Lake. They sought the armor provided by moving away from something.

The walls rose before him, the timbers bathed in the red-orange glow of flame. Kole took the steps to the gate two at a time. He scanned the curving arch, picking out the intermittent stone braziers that glowed along its length. The rest of the defenders were scrambling up their steps and getting into position, the Keepers settling next to their braziers. Kole closed his eyes and felt the heat tickle his blood as his own brazier thrummed.