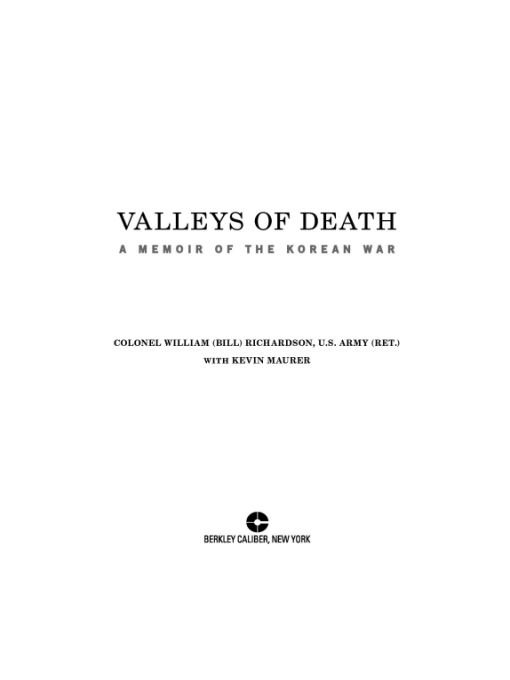 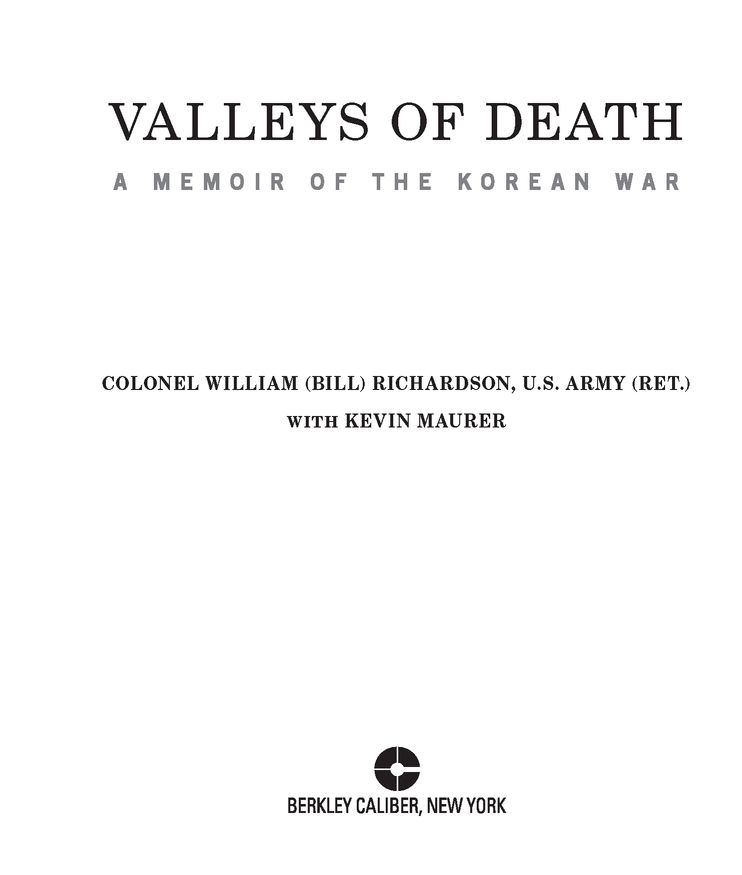 This story is dedicated to the combat infantrymen who
fought and died so heroically from the Pusan Perimeter
to Unsan, North Korea.
And to those who died and survived the horrors of prison
camps in North Korea.
And to my wife, Claire, with all my love.
Without her this story would never have been written.
ACKNOWLEDGMENTS
Over the years a number of individuals have contributed to bringing this story to fruition. I will forever be indebted to the following:
David Halberstam for his friendship and encouragement on the writing of this book. It was sad that his untimely death took place just as his latest book,
The Coldest Winter
, was published.
Thomas Richardson, my brother who conducted the research in the National Archives of the Eighth Cavalry Regiment actions in Korea up to the battle of Unsan. His research confirmed the timeline and actions I had placed in my initial drafts.
Richard Boylan, chief of the U.S. Government Military Archives for assisting my brother and helping to locate my dossier of the debrief on my return from North Korea.
To my friends in the Department of Defense, MIA-POW, Dan Baughman, Philip O'Brien and the rest of the outstanding personnel for their help over the years.
Tim Casey, CSM retired, for his friendship and correspondence over the years. He has been a reservoir of knowledge on U.S. Korean POWs.
My niece Nancy Richardson Patchan, for the editing of my work on the first attempt at writing.
PREFACE
This is not a history of the Korean War. It is a down and dirty look at some of the soldiers who, five years before, had experienced combat in the second world war. It is the story of the men they would lead, a new generation of courageous young soldiers in what would be the last true Infantry war.
The heroes of this story are the young men of the Third Battalion, Eighth Cavalry Regiment and in particular the men of the weapons platoon of “L” Company. Most of them died in combat or in the horrible conditions of a prison in North Korea.
The story is told through my own eyes. I have made a strong attempt to avoid adding to the story what others have said or what I have learned over the last fifty-seven years. But there are a few truths that are undeniable.
Korea was a war that neither the country nor the military was ready for, and we paid a high price for our lack of readiness. The disaster at Unsan written about in this book was caused by a lapse of leadership from the highest echelon down to the battalion level. Mistakes we paid for with the blood of the most heroic men I have ever known.
Some may ask why I waited so long to write the story. Although my experience in Korea guided my career through the years, I never felt that it was any more than a unique experience that very few men had.
Also, while I will never forget Korea, some of the details were buried deep in the recesses of my mind, much like the weapons platoon rosters I buried by a bridge abutment in North Korea. No matter how much I try, I cannot recall many of the names in my unit. For one, many were replacements whom I met in the midst of combat. Also during the thirty-four months in prison, survival was paramount in my mind. Therefore, I could not provide every soldier's name or recall his upbringing or his hometown. Over the years the loss of men's names is the one thing that has haunted me and caused me a great deal of sadness. I can still see their faces and they are men that will be with me forever, even without names.
Ten years ago, I was given the opportunity to share my experience with young Special Forces soldiers who were participating in a three-week course on survival, evasion, resistance, and escape (SERE). It was through this program that I met a young reporter, Kevin Maurer, who was writing a story on the SERE program. He heard me speak and later asked if he could write an article about me for the
Fayetteville Observer
. I agreed and he wrote a great story. This was the beginning of a friendship.
It was shortly after that I asked Kevin if he would consider collaborating on a book. I needed him to break me of my military style of writing. He was continuously after me to tell the story the way I did when I spoke to the soldiers. In turn, I had to educate him on the Korean War, our equipment, organization, and the language we used back in the day. When I was young I liked to associate with older people. Now that I am considered old I like to be with younger people. Our relationship worked well.
During the production and publication of this book, my young friend and coauthor Kevin went back to Afghanistan to write about the new Greatest Generationâthe less than 1 percent of our great nation's youth who are sacrificing their lives in order that the other 99 percent of us can enjoy our freedom. Kevin will, much like Ernie Pyle, put a face on these young warriors.
So here is the story, the good, the bad and the ugly.

CHAPTER ONE
WAR
The world looked just great before the morning of June 25, 1950.
That morning, halfway around the world, under a dismal rainy sky, the North Korean Army crossed the 38th parallel, overwhelming the South Korean Army and sending them running south. I was home on leave in Philadelphia. I'd spent the last four years in Italy, Germany and finally Austria, on occupation duty with the U.S. Army. At my mother's house in Philadelphia, the radio kept a steady stream of updates. Outside at the newsstand, the headlines screamed off the page.
Â
REDS INVADE SOUTH KOREA!
Â
Â
ARTILLERY SMASHES INTO SOUTH KOREAN TOWNS AS
TANKS STREAM ACROSS THE 38TH PARALLEL!
Â
Â
KOREAN REFUGEES STREAM SOUTH IN FRONT
OF THE NORTH KOREAN ONSLAUGHT!
Â
Â
Meeting in emergency session, the U.N. Security Council voted to defend South Korea. The Soviets were boycotting over the U.N.'s refusal to recognize Communist China. The U.N. put the United States in charge and named General Douglas MacArthur the commander of U.N. forces. This would be the U.N.'s first war.
Fifty-three countries registered their support, and twenty-two of them offered troops and other help. But the United States would carry the main military loadâsomething it wasn't prepared to do.
That night, President Truman told the nation that he was committing U.S. forces to Korea. I reported for duty at the replacement center at Fort Devens, Massachusetts. There were a number of men waiting to be discharged. It had been the same scene when I reported to Fort Dix, New Jersey, a few weeks earlier.
At Fort Dix I was standing in line at the replacement center, a hastily built wooden building created to house troops during World War II, with transfer papers in hand. I watched man after man get his discharge. I didn't want to get out and hoped to get an extension. I'd met a girl in Austria and hoped to get back over to Europe with a new unit.