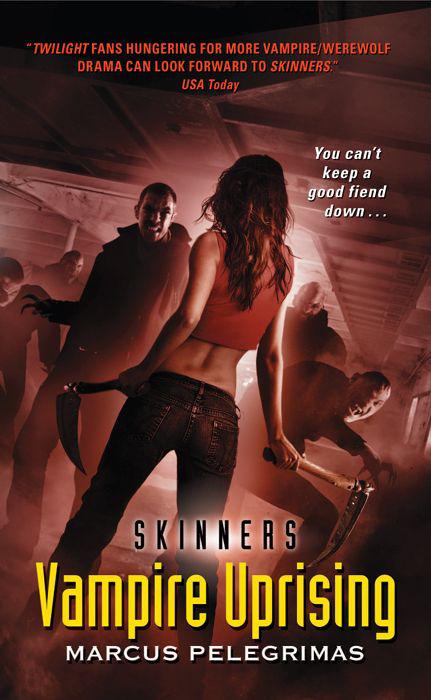 Things had gotten crazy over the last few months. Wild dogs prowled city streets. People were infected with exotic diseases. Armed psychos killed other armed psychos. Freaks were spotted in Chicago and on top of buildings in Kansas City. Detective Kilmer shook his head when he thought about witnesses that came forward to tell stories about vampire attacks in his own city. At least some things had been taking a change for the better. He’d been getting real tired of those doe-eyed pretty boys staring longingly at him from every magazine cover on the newsstand at the convenience store where he got his daily Almond Hazelnut Cappuccino. But those were the stars of movies and television shows. From what he’d been hearing lately, the real bloodsuckers weren’t so kid-friendly. Kilmer chuckled and sighed at the fact that he was wasting his time buying in to the bullshit he’d been seeing online and on the tabloid news shows.

“Strange days have found us,” he muttered, quoting some of the classic rock he’d been listening to for the last hour. “You said it, Jim.”

The industrial district was quiet at this time of night, populated mostly by homeless guys looking for a corner they could claim long enough to catch some sleep or a jacket that had been left behind by a driver of one of the many trucks
parked in the lots outside of the warehouses lining 50th and Oneida Streets. Kilmer was in his late forties and had allowed a formerly athletic build to spread around the middle after he’d traded his uniform for a Detective’s shield. He hated to buy in to those “cops and donuts” stereotypes, but he’d hit a Hostess Discount Store on his way to the station the day before and had picked up a good selection of treats for under ten bucks. The pure chocolate-covered bliss of Ho-Hos contrasted perfectly with a variety of frosted pies. An apple a day and all that. “Close enough for me,” he said while picking up an apple fruit pie.

Thanks to his rearview mirror, he caught sight of a guy staggering up to his car who matched a description he’d been given earlier that night. Kilmer stuck his hand into the plastic bag on the seat next to him. When he saw he’d randomly pulled out a two-pack of raspberry Zingers, he put them back and replaced them with some chocolate mini donuts. He was grateful for his informant, but not raspberry Zingers grateful.

“Here you go, buddy,” Kilmer said as he rolled his window down and tossed the donuts.

Catching the snack in one hand, the man squatted down outside the unmarked police car’s window. He had a lean, muscular build and tanned skin. Bushy eyebrows formed a border across the top of a set of cheap sunglasses with light brown lenses. A thermal undershirt was stuck to his torso by a film of sweat beneath a layer of rumpled denim. “I better be getting more than this for delivering these assholes to you.”

“How about the satisfaction of a job well done?” Seeing the almost disgusted look on the other man’s face, Kilmer added, “Free tickets to the Policemen’s Ball?”

“There really is a Policemen’s Ball?”

“I don’t care what you call it,” the man outside the car said while pulling open the pack of donuts and stuffing one sugary circle into his mouth. “Long as I get it.”

“So you’re the one that made the call? Larsen?”

“What happened to Michael?”

“He’s inside. I know he’s the one that usually talks to you, but he couldn’t get away and told me to make sure you came along before things got too out of hand.”

Kilmer looked down at a little spiral notepad that lay open on his knee. On it, he’d scribbled notes regarding the principals he could expect to encounter on the bust at the warehouse. Michael’s name was at the top of the list, followed by Larsen’s. “All right,” he said while opening the door and rolling up the window. “Let’s see what you got going on in there.”

Watching Kilmer exit and lock his car, Larsen asked, “Don’t you have a partner with you?”

“Not for peeking in on a suspected fencing operation. If things go bad, backup’s just a call away. Are you expecting them to go bad?”

“We’ve been telling you they would for weeks now. All that got us was a few squad cars driving by now and then before they found somewhere else to be.”

“The uniforms didn’t see anything and there wasn’t one call made to us while they were here,” Kilmer groused. “There’s other shit happening in Denver, you know. We don’t have the resources or manpower to lock down a bunch of empty warehouses just because you and your buddies say so.”

“What about those meth dealers Michael told you about? Wasn’t that worth something?”

“Yeah. It was worth diverting some squad cars to patrol Oneida for a few weeks. What the hell else do you want? Now what’s so damn important that you called for me to watch this place all night long? I thought there was supposed to be some big bunch of stolen goods brought in here.”

They’d walked about half a block and had yet to cross paths with anything larger than a cat. Stopping to turn on his heels, Kilmer butted his chest against Larsen’s shoulder to knock him off his balance. In a series of swift movements, the Detective had the other man pinned against a wall.
“Handing over those meth dealers bought you some clout, but it’s all used up. You want to jerk us around to make it look like you got some cops on a string? That’s a real good way to land you in jail right beside those shit-stain dealers you set up.”

Larsen didn’t get a word out of his mouth before something thumped against the window of the large, singlestory building farther down the street. Placing one hand flat against Larsen’s chest, Kilmer put his other upon the grip of the gun holstered at his waist. “Stay put,” he said.

The warehouse was one of several in the neighborhood and was flanked by parking lots filled with semis that formed a wall between the building and the street. Skirting the closest lot, Kilmer headed for the building’s main entrance, which was marked by half a sign sporting three faded letters. The numbers over the door were the same as the ones he’d written on the pad he’d left in his car and committed to memory in the time he’d been waiting for his informant to arrive. One window was covered by a set of old blinds yellowed by the sun. The pane directly beside it was cracked from the impact of a body that still had its back pressed up against the glass from the inside.

“Son of a bitch,” Kilmer said as he reached for the radio clipped to his belt. As soon as his hand found the device, the person on display in the window was pulled back and slammed forward again with enough force to shatter the glass. The moment the body fell outside and flopped over the bottom of the frame, Kilmer saw the piece of sharpened wood protruding from its chest.

After drawing his pistol, Kilmer gripped his radio in his free hand and tensed his finger upon the key that would connect him to his precinct. Before he could bring the radio up to his mouth, a woman appeared among the shadows within the building and leapt outside to dash around behind him. When he turned around to face her, the radio was slapped from his hand.

“Stop where you are!” Kilmer bellowed while widening his legs and putting himself into a stiff-armed firing stance.

The woman who’d jumped through the broken window
crouched down like a coiled spring. Sweat plastered her hair to her face and formed a glistening sheen upon her narrow features. When she curled her lips back, it was as much a grin as it was a display of the long, sharp teeth extending from her upper and lower jaws.

Kilmer fired out of instinct, but hit nothing. The woman was no longer standing in front of him, but had sailed back through the window. A sharp pain made him look down to see that both of his wrists had been opened deeply enough to expose veins as well as jagged ends of bone that had been broken by whatever had torn him apart in less than half a second.

A cold sweat broke upon his brow.

He started to lose his balance and would have fallen if not for the young men that swarmed out from the building to catch him.

As he was being carried in through the window, Kilmer’s head lolled to one side and the edges of his vision started to blur. The body that had broken the glass belonged to a young man somewhere in his late twenties. He convulsed with haggard breaths that were forced out in spastic coughs before sitting up and letting out a pained groan as the sharpened stake in his chest shifted. When he grabbed the stake to pull it from his chest, he was attacked by others dressed in ragged clothes that emerged from the shadows on all sides. Locking eyes with Kilmer while swinging the stake to defend himself, the man said, “You … can’t be here.”

Hands grasped at Kilmer. Some of them dragged him farther into the building while others tore at his flesh. Wet things slapped against him, most of which were tongues protruding from parched lips. He tried pushing the licking horde away, but that only angered the ones closest to him and caused even more fangs to sprout from slits in their gums.

“Put him down!” the man near the window said. “He’s not part of this!”

More figures entered the room. There was no furniture to get in their way so they flowed in like a tidal wave. Trained to figure his odds upon entering any hostile environment, Kilmer counted ten of them before the assholes shoved him
against a wall and went to work. Their knuckles cracked against his jaw like frozen iron and thumped into his gut. He struggled, but was weakened by the blood that had sprayed out from his torn wrists and continued to leak down his hands and drip off the ends of his fingers.

The woman who’d brought him inside was crouching down over another prone body that looked to be a male of average height with a slender build. As she loomed over him, the fallen man stretched out one arm to grab some kind of sword that was made of wood. He would have gotten to it if the woman didn’t sink her fangs into his throat.

Everything Kilmer saw was blurred and only got worse as the blows hailed down relentlessly upon him. Years of training and experience on the streets of three different cities helped him slam his knee into the groin of one of his attackers and grab the face of another. If he’d had any strength at all, he would have gouged out the bastard’s eyes. Instead, he could only watch as the son of a bitch pulled his head away from Kilmer’s fingers and snarled to show a set of curved teeth that slid down along the inner edge of fangs that were already sticking out of his upper jaw. After those curved fangs were sunken into his shoulder, something was pumped into Kilmer’s system that sapped the rest of his will and caused his mind to wander in several directions.