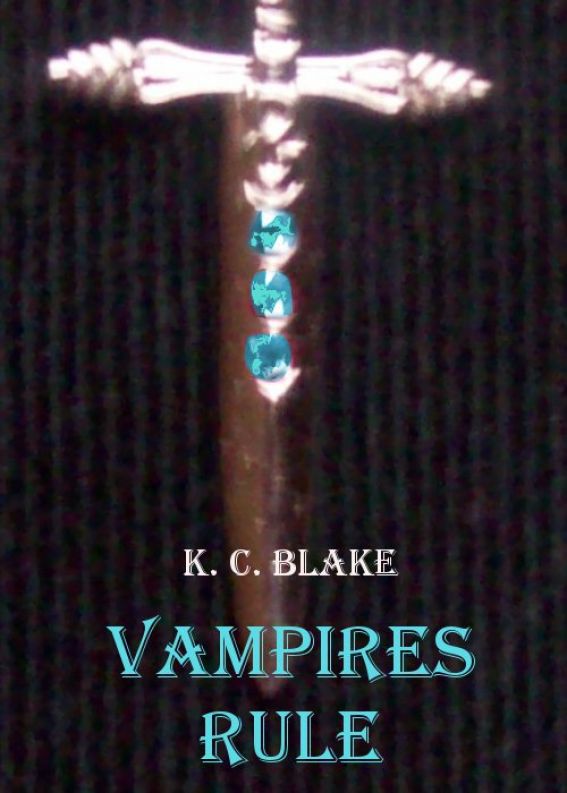 This ebook is licensed for your personal
enjoyment only. This ebook may not be re-sold or given away to
other people. If you would like to share this book with another
person, please purchase an additional copy for each recipient. If
you’re reading this book and did not purchase it, please return to
Smashwords.com and purchase your own copy. Thank you for respecting
the hard work of this author.

First of all, I want to thank God because He
gave me the idea and the skill, walked me through it, confirmed it
through other people and kept me from quitting when I was tired. I
also want to thank the following people in no particular order:
James and Shirley Poe, Natashia Harris, Jonathan Canada, William
Kumbier, Stacie Schott, and Robert and Kerry Stewart.

Chapter1-A BOY WITHOUT A HOME

Chapter5-TROUBLE ON THE FIRST
DAY

Chapter9-TWO WEREWOLVES ARE
MORE DANGEROUS THAN ONE

Chapter13-SUMMER FINDS OUT ABOUT
SILVER

Chapter24-THE BATTLE BEFORE THE
WAR

Chapter One:
A BOY WITHOUT A HOME

The vampire stood in the shadows and stared
up at the farmhouse he used to call home. No longer the bright
sunny yellow his mom had chosen, the exterior had been covered with
a muted olive tone. This small difference knocked Jack off-balance.
For a fraction of a second he thought he might be at the wrong
address.

Had his brother sold the farm?

His gaze skimmed over the dark windows, two
on the bottom floor and four on the top, searching for signs of
life. The porch light glowed with an eerie, almost palpable
presence that warned Jack to stay hidden, but he had to know if his
brother was gone. Focused on the task, he walked into the light and
crept up the porch steps. He slowly crossed to the huge bay window.
He leaned in to peer through the dirty glass.

A wild drum solo broke out in Jack’s pocket.
He jumped backwards and tripped, almost falling off the porch
before realizing it was only his stupid cell phone. An electric
guitar joined in, adding to the ear-splitting racket. He patted his
pockets, frantically searching for the thing while he scanned the
yard for movement. This wasn’t exactly the covert operation he’d
planned. His fingers closed around cold metal, and he answered
without checking Caller ID. It could only be one of three people;
his vampire friends were the only ones with the number.

Jack flinched. With a jerk of his hand, he
put a few inches between the cell and his traumatized ear. Lily’s
warning barely registered; his mind was on other matters. He was
about to break into his childhood home, ten times in ten years.
Although no one was around and the house was in a sparsely
populated rural area, Jack tried to keep the noise to a minimum. He
glanced around again to make sure Lily’s high-pitched freak-out
hadn’t stirred up trouble. No telling what creatures lurked
nearby.

“Hello?” Lily yelled, “This is serious!
According to the cards, you’re going to die within the next three
hours.”

“Well, I already died once. What’s the big
deal about doing it twice?”

Jack went to the front door and considered it
from every angle. Under normal circumstances a vampire couldn’t
enter a house uninvited, but as long as Billy kept something
belonging to him and didn’t sell the place, Jack could enter
anytime he wanted. He waved his hand over the doorknob and heard
the lock click. Billy hadn’t moved. Relief and excitement flooded
his system as the door swung open, silently inviting him inside.
Cool
. No matter how many times he used his powers, the same
tiny thrill rocked his senses. A short-lived laugh escaped his dry
throat.

A scowl replaced the smile and he warned her,
“If you don’t stop yelling at me, I’m hanging up.”

“You have to stay away from her.”

“That girl in the fuzzy pink sweater. She’s
the reason you die tonight.”

Lily babbled on. “She has long hair, but the
color is kind of hard to pinpoint. I’d say it’s either dark blond
or light brown. Doesn’t matter, I guess. Um, she’s short and thin
but not skinny, and her eyes are deep blue. She’s not classically
pretty, not to me anyway, and she’s definitely not your type. Just
stay clear of her. She’s trouble.”

“The cards told you all that?” Dry amusement
altered his tone.

“Don’t be a smartass. After I did the cards,
I had a vision. This is serious. When you see the girl—and you
will—walk the other way.” There was a short pause. Sometimes Lily
hesitated on purpose for dramatic effect. It made his skin itch.
“No. When you see her, I want you to run the other way.”

He shrugged. “I promise.”

He rubbed his tired eyes. The house called to
him. More than anything he wanted to go inside and take his annual
trip through the rooms, mentally relive better days, but Lily had
ruined everything with her kooky vision crap. His brother might
show at any second, spoiling his return visit. Time slipped through
his fingers like tiny grains of sand. Every muscle in Jack’s body
tightened.

“You don’t have to get snippy. I’m only
trying to help.”

“You caught me in the middle of something
important.”

“What?” He could practically see her twirling
strands of curly blond hair. “Where are you? What are you
doing?”

He disconnected the call and returned the
cell to his pocket. For a moment he stayed where he was on the
porch and tried to picture the mystery girl Lily had described. His
mind could only produce a vague rendition of a fairly pretty girl.
Lily shouldn’t worry. He had no intention of taking a stroll in the
sunlight or getting into a fight with a hunter. He especially
wouldn’t get himself killed over some random girl.

He took a deep breath and entered the house.
Each bittersweet step reminded him of what he’d lost. He’d give
anything to have his old life back. Anything.

The foyer hadn’t changed. He smiled at the
yellowing wallpaper, cream-colored with tiny purple flowers, as he
remembered the day his mother had brought it home. There was a
small coat closet to the right and an arch next to it that led to
the kitchen. His mother had put a small table on the left because
his father wanted to drop his keys the second he entered the house.
An arch leading to the living room, also on the left, beckoned to
him but Jack didn’t want to venture into there yet. The stairs with
the handmade railing he used to slide down as a kid lay directly in
front of him. Maybe he should go upstairs, take a look at his old
room.

His heart ached for his family. On an average
Thursday night his mom would have been in the kitchen, cleaning up
after dinner while his dad watched television, beer in hand.
Depending on their ages, Jack and Billy would have been doing
homework or wrestling around in their room or running around town
with friends.

With the exception of Billy, the entire Creed
family had been murdered by a werewolf.

Jack strolled through his former home, his
fingertips skimming the tops of possessions, stuff that had been
passed down to Billy. He loved touching tangible evidence that once
upon a time he had been human. His brother had kept everything:
Jack’s old baseball cards, his variety of sports trophies, and a
photo of him the night of his Junior Prom. He picked up the frame,
stared at the picture. The name of his date stayed just out of
reach. He remembered his mom insisting on taking the photo. Guilt
over giving her a hard time made his heart sink.

Another regret in a long line.

Jack tripped over a discarded book on the
living room floor. A curse word slipped off his tongue. Billy
wasn’t much of a housekeeper. There was an inch of dust on
practically everything in sight, and Billy’s dirty clothes were
scattered around as if he didn’t know where his closet was at.

A reluctant smile stretched Jack’s lips, but
it froze at the sound of footsteps on the porch. He sniffed the
air. Billy had returned. Now what?

Jack spun around the center of the living
room in a full-on panic, needing a quick place to hide. Although he
could move faster than any human on the planet, he couldn’t make it
out the back door without Billy hearing him. Besides, he couldn’t
resist the temptation to see his brother.

A key rattled in the lock.

Jack zipped across the foyer and jumped into
the coat closet. He left the door open a crack to allow him a clear
visual. For some reason Jack had expected Billy to be a
fifteen-year-old boy, but his brother had passed him in years and
in inches. Jack silently calculated. Billy was twenty-five now. He
had become a man, a pinnacle Jack would never reach.

Billy entered the foyer with a canvas bag
slung over his shoulder and a handful of envelopes in his hand. He
dropped the bag while looking at the mail. Piece by piece he went
through it, tossing each envelope to the corner table after giving
it careful consideration. He stopped abruptly, lifted his head and
frowned. He scanned the room as if he too was vampire and could
sense his brother’s return.

Fresh from a fight, there was a rip in his
jeans, a bruise on his cheek and a bleeding cut above his left
eye.

“Hello?” Billy called out, hesitant. “Is
someone here?” He slowly revolved before saying a single word
beneath his breath, a word that sent shock-waves through the
vampire in the closet.

Jack’s eyes widened. He caught an audible
gasp with his hand and sank further into the closet, allowing
darkness to temporarily devour him, but he still felt exposed as if
Billy could see him through the door. Hiding in the closet had been
a dumb idea. Hell, the whole breaking into his family’s home had
shown a serious lack of good judgment.

If his friends ever found out he’d risked
exposure, they’d tear his head off.

Billy headed into the living room, and Jack
released a slow breath between clenched teeth.
Hissss
. The
scent of Billy’s blood pulled him forward until he had his face
pressed into the crack. Tempting. Hunger pains began deep in his
stomach. The ache expanded like ripples when a stone is dropped in
still water. His fangs slid forward, protruding from hidden pockets
in his gums.

No, he was not going to hurt his brother.
Jack shook his head back and forth hard, gasping for breath and
trying to control the monster inside. He couldn’t hurt Billy. His
hands clenched into fists. Resting his forehead against the door’s
wooden frame, he regulated his breathing. It took a great deal of
effort.

Deep in the Heart by Sharon Sala
Trust Me by Melinda Metz - Fingerprints - 3
How to Find a Job: When There Are No Jobs (Book 1) a Necessary Job Search and Career Planning Guide for Today's Job Market (Find a Job Series) by Rega, Paul
Vegas Sunrise by Fern Michaels
The Mulberry Bush by Charles McCarry
Youngblood by Matt Gallagher
The Pretenders by Joan Wolf
Holdin' On for a Hero by Ciana Stone
Beautiful Dreamer by Christopher Bigsby
Eagle's Honour by Rosemary Sutcliff
Our partner