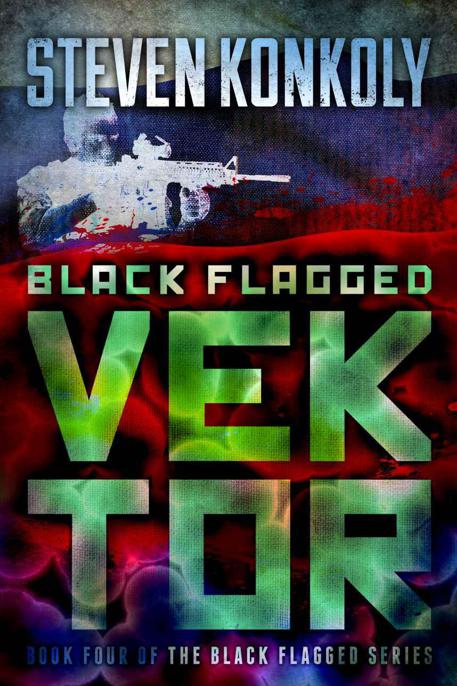 Copyright © 2012 by Steven Konkoly. All rights reserved. Except as permitted under the U.S. Copyright Act of 1976, no part of this publication may be reproduced, distributed or transmitted in any form or by any means, or stored in a database or retrieval system, without the prior written permission of the author, except where permitted by law, or in the case of brief quotations embodied in critical articles or reviews. For information, contact
[email protected]

Excerpt from
The Jakarta Pandemic

To my wife, for reading through Vektor twice. She’s become my primary sounding board for nearly every step in the process. The kitchen has become our boardroom.

To the beta reader crew. Trent, Nancy, Joe S, Jon, and Bruce. Special thanks to Nancy and Jon for providing an exhaustive list of edits.

To the multinational production crew, starting with editor extraordinaire, Felicia A. Sullivan (Maryland). No deadlines on this one…sort of. Jeroen ten Berge (New Zealand) for another stand-out cover. Stef (UK) for keeping my blood pressure in the green by taking care of the formatting. I used to set aside several days to do this, and still didn’t come close to getting it right. Finally, Pauline (Canada) for another solid proofing job. As a writer, I couldn’t as
k for a better team. Thank you.

Steven Konkoly graduated from the United States Naval Academy and served for eight years in various roles within the Navy and Marine Corps. He currently lives with his family on the coast of southern Maine.

Excerpt from
The Jakarta Pandemic

Please visit Steven’s blog for updates and information regarding all of his works.

Black
Flagged
Vektor
is the fourth book in what I call the “core” Black Flagged series. I had originally intended to squeeze
Vektor
into
Apex
, but was stopped by good friend and writer, Joseph Souza. He kindly informed me that 1.) The book would run another 200 pages and already contained enough sub-plots to keep the most avid Clancy reader occupied 2.) The idea deserved its own, fully developed story line. After finishing
Vektor,
I’m glad he stopped me. There is no way I could have closed the loop on this aspect of the
Black Flagged
world without cheating readers.
Black Flagged Vektor
takes place a few weeks after the events of
Black Flagged Apex.

Like the rest of the
Black Flagged
series
,
keep in mind that the scenes occur in chronological order and are labeled in local time. Here is a list of the time zone differences between the locations featured in the
Black Flagged Apex
and the U.S. East Coast: Argentina +2 hours, Kazakhstan +10 hours, Moscow +9 hours, Germany +6 hours, Novosibirsk +11 hours, Sweden +6 hours, Ukraine +7 hours.

Finally, don't forget about the
Character List
, which can also be accessed from the link in the
Features Index
.

Karl Berg walked briskly down a wide, raked gravel path bordered by weathered cedar planks. The main walkway cut directly through a rough landscape of knee-high grasses and lichen-encrusted granite chunks. Several smaller paths branched off into the thick pine trees that surrounded the clearing. He easily found path number five, which was marked by a solid-looking post displaying the number. He stopped for a moment and took in his surroundings, shaking his head slowly. If the American public ever discovered that their taxes funded places like this, the CIA would have hell to pay. Even he had a hard time coming to terms with it.

For such a small “guest” population, the Mountain Glen facility cost U.S. taxpayers an unimaginable sum of money. The compound had been designed as the final “deal” for enemy foreign nationals willing to provide information critical to U.S. national security. Enemies too dangerous for release were offered a lifetime “retirement” in exchange for their knowledge, which would be vetted and confirmed. Prior to permanent acceptance at Mountain Glen, the director of the CIA carefully reviewed each case. If the information turned out to be bogus or failed to live up to advertised expectations, the “guest” would be evicted.

The process involved a significant element of trust, but few prospective guests turned their back on the deal after spending a few days at Mountain Glen with its fresh air, mountain views, babbling brooks, gourmet food, and first-class accommodations. Most of them had already tasted the alternative while in regular custody. Only the most stubborn or distrustful chose to spend the rest of their lives trapped in a dank, poorly lit prison cell, pissing and shitting into a rusty coffee can that was emptied once a day.

He turned down the path and let the pristine air fill his lungs. Cold pine air. Quite a difference from the crowded confines of the Beltway. He couldn’t imagine anyone turning down the offer to stay here.

The temperature dropped a few degrees as he passed through the green curtain of pines. He could see a small post-and-beam structure with two dormers and a green metal roof situated in a tight clearing fifty meters ahead. He searched the trees while he walked, trying to spot one of the cameras or sensors. He felt exposed walking to Reznikov’s villa alone.

Berg approached the front door cautiously, scanning the windows for signs of life within the house. Security had assured him that Reznikov was awake. Breakfast had been delivered thirty minutes ago. He thought about that. They delivered breakfast at Mountain Glen. Reznikov certainly didn’t deserve a place like this, but what other options did they have? The door opened before he could knock.

“Come in, my friend. Breakfast is waiting,” said an invigorated looking Anatoly Reznikov.

“I already ate,” Berg said, stepping across the threshold, fully expecting to defend himself from a hand-to-hand attack.

“Nonsense. Please, this is my treat. Welcome to my mountain
dacha
.”

“It’s not yours yet. We’re still a long way from securing your stay, which is why I’m here,” Berg said.

He followed Reznikov through a short hallway to a square, Shaker-style kitchen table. Through the windows beyond the table, they had a view of the pine wall at the edge of the backyard. A snow-covered mountain peak rose above the pines, but the view wasn’t what caught Berg’s attention. What did was a one-third empty bottle of Grey Goose vodka, which sat on the kitchen counter next to a small shot glass.

“Looks like you’ve made a remarkable recovery,” Berg said.

“It must be the mountain air, and a little gift from the staff. Join me in a toast.”

“Never too early to celebrate. Plus, it’s almost noon—”

“And I need to warm up for our chat. You won’t be disappointed,” Reznikov said.

While Reznikov pulled another shot glass out of a cabinet, Berg placed his leather satchel on the pine floor and sat down at the kitchen table. He surveyed the feast prepared by the lodge’s kitchen staff. He hoped they were just rolling out the red carpet to loosen Reznikov’s lips. Fresh fruit, orange juice, lobster Benedict, smoked salmon and toasted bagels with cream cheese.

“Please help yourself. They just showed up with all of this. Can you believe it? Only in America. I should have come to your country earlier. Maybe I wouldn’t have turned out so bad,” he said. He poured two full shots of vodka and set one of the glasses in front of Berg, then took a seat across the table.

“A toast. To taking down VEKTOR Labs.”

Berg hesitantly raised his glass. He eyed Reznikov warily as the Russian downed his glass of clear liquid. Berg followed suit, grimacing at the sharp burn. A few seconds later, he felt a little less worn out from the previous day’s travels.

“Where did you stash your beautiful assistant? I had hoped she would be part of the package. I didn’t notice any women here.”

“I’m sure they keep a few blow-up dolls on hand for the guests,” Berg said, placing the shot glass down on the table.

Reznikov’s jovial smile flattened. “Such hostility. Not exactly the kind of environment that makes me want to share the intimate details of my former employer.”

The Russian reached behind him to retrieve the vodka bottle from the countertop.

“Perhaps you’d rather have your head stuffed into a diarrhea-filled toilet bowl three stories below the surface of the earth?” Berg raised his hands to simulate a balanced scale. “Fresh mountain air, nice view, gourmet food, spa-like amenities,” he said, raising one hand and lowering the other. “Or…daily beatings, concrete pavement sleeping arrangements, one meal a day, and toilet bowl scuba lessons. Don’t fuck with me here.”

“Easy, my friend. I get it,” Reznikov said, pouring another shot.

He started to move the bottle over to Berg’s side of the table, but Berg grabbed it from his trembling hand. On closer inspection, Reznikov didn’t look as robust as he was acting. Mention of a permanent prison cell underground had quickly flushed the color from his face.

“I’m not your friend, and you’ll get this bottle back after we’ve made considerable progress.”

Berg placed the bottle on the floor and retrieved a legal pad from his satchel, along with a digital recording device.

“Don’t put the bottle on the floor. Radiant heat, you know. Feels wonderful, but you almost have to wear socks,” Reznikov said.

Berg removed the chilled bottle from the floor, placing it on the table, shaking his head. Radiant fucking heat? What was next? Daily massage therapy?

“So…where do you want to start?” Reznikov asked.

“From the beginning. How did you become involved with Vektor?”

“The roots of that decision reach back to my childhood. Are you in the mood for a story?”

“As long as it has something to do with Vektor,” Berg said.

“It has everything to do with Vektor and how Russia’s bioweapons program long ago eclipsed their nuclear weapons program,” he whispered.

Three hours later, Berg emerged from the villa with a distant look on his face. He followed the gravel path through the forest to the main clearing, hardly paying any attention to his footing. The warm late afternoon sun barely registered on his face. If Reznikov had told the truth, the United States and its allies faced the greatest threat to world stability since the Cold War. A secret race to develop bioweapons of mass destruction, and the Russians had a thirty-year head start. The reckless plan that he’d suggested to Sanderson didn’t feel so outlandish anymore. The bioweapons program at Vektor Labs had to be destroyed.

How I Became a Famous Novelist by Steve Hely
Here Lies Bridget by Paige Harbison
Eyes of the Killer Robot by John Bellairs
Alea Jacta Est: A Novel of the Fall of America (Future History of America Book 1) by Marcus Richardson
The Man With the Iron-On Badge by Lee Goldberg
Zora's Dawn (Defender Book 1) by Sheryl Lee
The Last Man by Vince Flynn
The Day the World Came to Town: 9/11 in Gander, Newfoundland by Defede, Jim
The Cluttered Corpse by Mary Jane Maffini
Rules of Engagement by Christina Dodd
Our partner