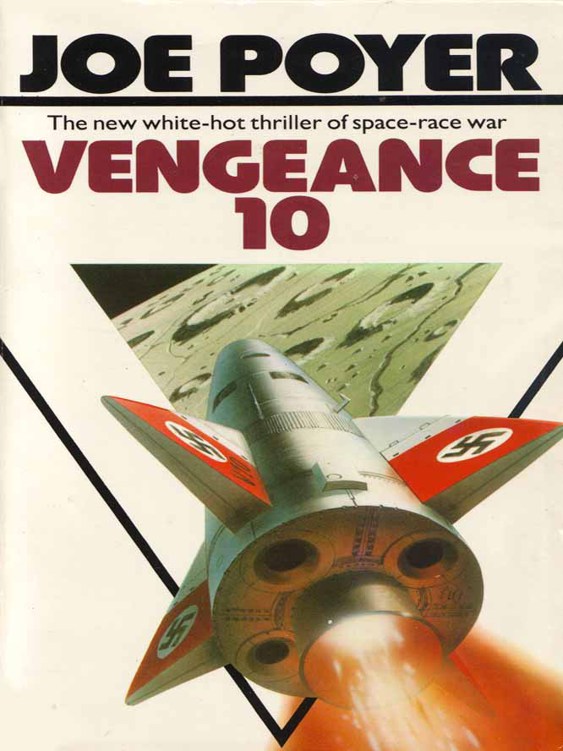 AXIOM:
A “nine days’ wonder”
is taken as a matter of course
on the tenth day.

AXIOM:
A “common sense” prediction
is sure to err on the side
of timidity.

AXIOM:
The more extravagant
a prediction sounds the more
likely it is to come true.

Now that they were out of the plains and into the foothills, the terrain was becoming rugged. Gently rounded hillocks were giving way to craggy hills, and here and there a rough stretch showed ahead along the route that led up towards the ridge they had selected a few hours previously. The changing lunarscape now provided sufficient reflecting surfaces to relieve the dense, formless shadows which the tractor’s powerful floodlights could do little to resolve.

Douglas Cummings eased the speed down a trifle to feed more torque to the rear tracks. He scratched his jaw, then reached around for a persistent itch beneath his shoulder blade. They were a hundred and five hours out of Armstrong Base at Taurus-Littrow, and he badly needed a bath.

Don Wayne slid into the co-driver’s seat and swivelled so that he did not have to look at the sun-blasted lunarscape. Cummings raised a single eyebrow.

‘A possible. Selenography is good.’ He shrugged. ‘The satellite magnetometer readings are strong and consistent. If there’s iron ore, it should be an extensive deposit.’

‘Should be,’ Cummings echoed. ‘If I had a dollar for every should be...’ He let the thought trail off. ‘All right. This one, then we go home. I’ve had it.’

Wayne turned to face the rear of the cabin. ‘Flip to see who goes out?’ he asked hopefully.

‘You wanted to sleep, remember?’

An hour later Cummings eased the big tractor up a narrow gorge that led through sheer, jagged walls. Terrain this rough was unusual short of the mountains, still some ten kilometres distant. The gorge opened out on to a wide, featureless plain that dipped towards the centre to form an irregular bowl. He eased the speed up again and sat contemplating the route ahead, searching for the smoothest way across to the long ridge that was their destination. Fifteen minutes, he judged, and used the intercom to warn his partner to get into his pressure suit.

The airlock display winked red ten minutes later to indicate that Wayne was inside and cycling. Cummings swore under his breath. As many times as he had warned Don against that practice, he persisted. The time saved just wasn’t worth the possibility of a blow-out. He sealed the driving cabin and turned the heater up.

Cummings had begun a sharp turn along a crevice that he hoped would lead to flatter ground, when Don shouted. He slapped the engine switches to cut the power, and as the tractor eased to a stop he caught sight of Wayne sprinting across the surface in long, even bounds. What the hell, he thought, and reached for the transmitter switch.

‘Doug, get your suit on and get out here,’ Don shouted, beating him to it. ‘I saw metal glinting, about ten o’clock and three hundred metres out. It’s either an old Saturn S-IVB stage or that Russian cargo container they lost last month.’

Cummings hooted and snatched his suit from the locker. God damn, he thought. If it was the cargo carrier and if it wasn’t smashed to hell and gone, they might find some vodka, real vodka and not that musty sludge the Chem lab cooked out of the algae-oxygen system.

As he left the tractor he picked up Wayne’s transmission narrating a running commentary for the tapes: ‘. . . elongated cylinder split down one side. It seems to have tipped on landing... hard to ... yes, it’s crushed across the centre, as if it fell over on landing.’

‘What the devil are you talking about, Don?’ Cummings demanded as he jog-jumped towards the slight irregularity barely visible in the sun glare. ‘Russian cargo carriers are spherical ...’

Cummings reached him a moment later. ‘What do you …. ‘

The spacecraft was, as near as he could judge, approximately ten metres long and four or less wide. The skin, where it was intact, was smooth metal, slightly hazed by micrometeorites, indicating that it had been there for some time. Its shape was streamlined, rather like the old-fashioned concept of a spacecraft. Lying nearby, and clearly identifiable in spite of its battered and crumpled condition, was a wing. A hell of a long wing, he thought, and the idea occurred to him that the spacecraft was, or had been, intended to make an aerodynamic, gliding-type landing - which suggested in turn that its makers had intended it to return to Earth or elsewhere?

Wayne had moved to the other side of the spacecraft as he arrived, and Cummings heard him grunt in surprise.

Wayne’s voice was hushed in astonishment and Cummings found him kneeling beside a gash in the metal skin, looking into a cabin.

The cabin was in shadow, but there was sufficient reflected sun to relieve the interior. At first the impact was so overwhelming that he had to deal with each impression in turn. There was the twisted control panel mounted on a swivel arm covered with old- fashioned dials and switches. The walls, once a light greenish colour, had cracked, and the veneer had splintered long ago under periodic temperature fluctuations of two hundred and more degrees Celsius. Plywood, he thought. I’ll be damned!

The body shocked him. Hunched half in the seat, half against the main console, the pressure-suited figure seemed asleep; except he knew it could not be. The leather and rubber material - leather and rubber! - of the suit had cracked in places, and a long tatter trailed along one arm. Obviously the pilot had not died in the crash but later. Good Christ in heaven, how much later? A chronometer had been dismounted from the cabin wall and was propped against the sloping console where it could be seen. It had stopped at 0800:20. The thought gripped him. What year, for God’s sake?

A pencil lay near the gloved hand, and he picked it up. A sheaf of paper was half-concealed beneath the body, but the writing had faded long ago and he knew if he touched it, the paper would crumble to powder. Whatever the pilot had written was gone for ever.

Wayne tapped him on the arm and pointed to a medallion mounted in the centre of the console. Cummings peered at it, then, not believing, found his flashlight. The beam of light glinted from the silver and red and black enamel of the stylised eagle clutching the swastika. Printed neatly in pencil beneath was a date: 31 January 1945.

The train was less than fifteen minutes from the German-Belgian border when the two men entered the carriage where Memling was seated. They found places at the end of the aisle facing him. The one to the left shook out a newspaper and began to read. Memling could see the banner
Das Eizenblatt
, which suggested they had come from Berlin. The second man, clad in a shapeless black suit, was staring out the window, apparently oblivious to the stale air and the crowded train. Winter light carved deep hollows in his cheeks, making him appear tubercular. Their eyes met as the carriage jolted over a set of points, and the man smiled a death’s-head leer.

Memling knew then they were Gestapo and had come for him.

Jan Memling had arrived in the Ruhr town of Amsberg two days earlier to keep an appointment with the manager of the manufacturing concern of Zemwalt GmbH. This was his first trip abroad and the first time he had been entrusted with dealings of such importance. In spite of his nervousness, the initial meeting had gone well enough, he thought, and the following day, to his immense surprise, agreement had been reached. A contract was drawn up with delivery of the required washing-machine parts promised for mid-May.

Memling was in a euphoric mood, and despite the icy rain which had persisted for days, he strolled the three miles back to the Hotel Husemann, whistling happily and peering into shops along the way. Depending on continental insouciance, he had even dared a ladies’-wear establishment where a pretty young clerk, under the maternal eye of an older woman, embarrassed him mightily. Even so, he left with a frothy lace blouse for his fiancée. Not even the outrageous price could dampen his mood.

Back at the hotel, he hurried to his room to change into dry shoes and trousers, brushed up, and went down to the lounge for a celebratory drink. He had been sitting at the bar practising his German on the bored waiter when a hand descended on his shoulder with a thud that almost knocked him from his seat. ‘Jan Memling!’ The words exploded in his ear, and he was spun around to see a square face topped with a shock of unruly long blond hair grinning at him.

‘Wernher!’ Memling gaped. ‘Wernher von Braun! I don’t believe it.’ He stumbled to his feet and wrung his friend’s hand. ‘My God, it is you. How long has it been?’

‘Four years. Paris, 1934, remember? Ah, did we get drunk that last night.’ Von Braun stepped back to take a good look at Memling. ‘Are you never going to add some weight? Do the English never eat? You all look half-starved.’ Then, remembering his manners, von Braun turned to the man with him. ‘But allow me to introduce my good friend and associate, Herr Doktor Franz Bethwig.’

Bethwig was as tall and blond as von Braun, Memling noted as he extended his hand. A lock of hair slipped over his forehead, and he brushed it back with a quick, nervous gesture, then shook Memling’s hand once and contrived to bob forward from the waist at the same time. His expression was noncommittal as he said, ‘So pleased to meet you, Herr Memling.’

Von Braun signalled the waiter who hurried over with two more chairs. Bethwig sat down, his posture suggesting quite plainly that he hoped they would be staying no more than a moment or two.

‘This is amazing,’ Jan Memling said, struggling in his excitement for the correct words. ‘Do you work in Arnsberg?’ Von Braun chuckled. ‘In a way. Franz and I have been here for three weeks.’ He lowered his voice to a whisper and leaned across the table. ‘And we are heartily sick of it. There is nothing to do but walk in the hills and drink. As it has been raining so much ...’ He shrugged. ‘Why, there is not even a decent cinema in the entire town. Thank God we leave tomorrow. But enough of us. Why are you here, of all places?’

Memling also shrugged, striving to appear nonchalant. ‘Nothing much. A few days on business. To settle a manufacturing contract for my company.’

‘Then you have taken your engineering degree,’ von Braun exclaimed. ‘I recall that you were studying when you came to Paris. Let me see’ - he tapped his forehead - ‘the Imperial College of Science and Technology, was it not?’

Memling looked uncomfortable for a moment. ‘No, I did not finish. The depression ruined my father’s business... I was lucky enough to find a position with a manufacturing firm in their quality control department. I have since been moved to production engineering. But I do plan to finish my degree when I am able.’

Undead and Unappreciated by MaryJanice Davidson
Edge of Honor by Richard Herman
The Death of Ivan Ilyich and Master and Man by Leo Tolstoy
Facelift by Leanna Ellis
His Destiny by Cosby, Diana
Manual de la perfecta cabrona by Elizabeth Hilts
The Scent of Lilacs by Ann H. Gabhart
The Silk Thief by Deborah Challinor
Guilty Blood by F. Wesley Schneider
Players of Gor by John Norman
Our partner