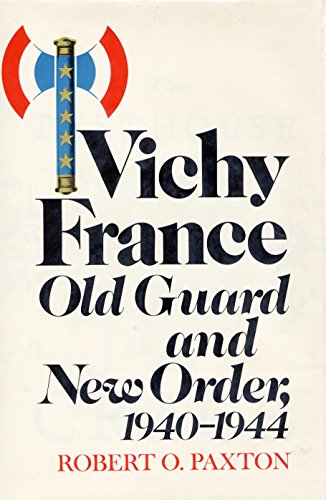 Uncompromising, often startling, meticulously documented—this book is an account of the government, and the governed, of colaborationist France.

Basing his work on captured German archives and contemporary materials rather than on self-serving postwar memoirs or war-trial testimony, Professor Paxton maps out the complex nature of the ill-famed Vichy government, showing that it in fact enjoyed mass participation. The majority of the Frenchmen in 1940 feared social disorder as the worse imaginable evil and rallied to support the State, thereby bringing about the betrayal of the Nation as a whole.

Tells us as much of the truth about Vichy as we are likely to have for a long time.... Paxton answers all the basic questions... in an even tone, with a vigorous style, allowing the devastating documents... to speak for themselves.

ROBERT O. PAXTON'S CLASSIC STUDY of the aftermath of France's sudden collapse under Nazi invasion utilizes captured German archives and other contemporary materials to construct a strong and disturbing account of the Vichy period in France. With a new introduction and updated bibliography, VICHY FRANCE demonstrates that the collaborationist government of Marshal Petain did far more than merely react to German pressures. The Vichy leaders actively pursued their own double agenda -- internally, the authoritarian and racist "national revolution", and, externally, an attempt to persuade Hitler to accept this new France as a partner in his new Europe. 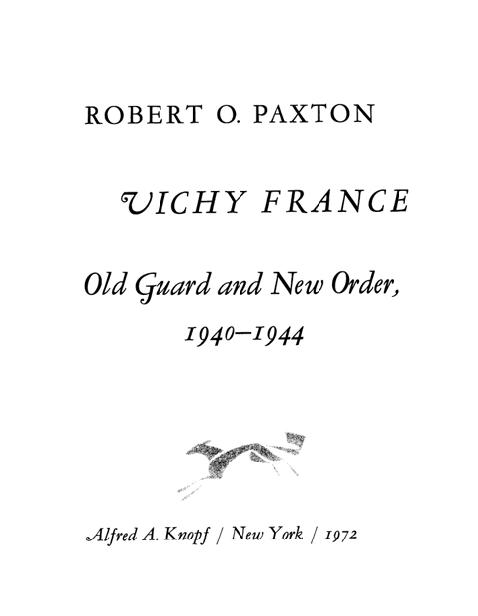 THIS IS A BORZOI BOOK
PUBLISHED BY ALFRED A. KNOPF, INC.

Pierre Laval and the Paris Connection

The Meaning of December 13

The Cold Shoulder: Flandin and Darlan

An Answer to Decadence

Moral Order: Education and the Young

France for the French

The State: Liberty and Authority

Return to the Soil

Escape from Class and Competition: Corporatism in Power

From Persuasion to Constraint: The Emerging Police State

The National Revolution and Fascism

The Revenge of the Minorities

The Left at Vichy

IV / Collaboration—1942–44: Between Liberation and Revolution

Threats to the Social Order—1; Resistance

1944: The Dream of Peaceful Transition, the Nightmare of Civil War

V / A Balance Sheet: The Legacy of Vichy

Was Vichy a Lesser Evil?

Appendix A: The War Question of January 1942

Appendix B: Glossary of French and German Abbreviations

More people and institutions have helped with this work than I can readily acknowledge or ever hope to repay. Research in France on several occasions was made possible by the University of California Summer Faculty Fellowship program, the American Philosophical Society, and the Research Council of the State University of New York. The Institute of Social Sciences at the University of California at Berkeley purchased microfilm for me, and the Institute of International Study at Berkeley supported a summer of work in the captured German archives in Washington.

Research assistance by Janis Trapans in the German archives, Claudio Segrè in captured Italian archives, and Mrs. Mary Lynn McDougall in social statistics was invaluable. Others whose help was indispensable are M. Henri Noguères of Paris, Warden F. W.
Deakin of Saint Antony’s College, Oxford, Professor René Rémond of the Institut d’études politiques in Paris, and Professor Stanley Hoffmann of Harvard. Stanley Hoffmann’s perceptions have crept into the very language in which modern France is discussed, on both sides of the Atlantic, to the point where my intellectual debt to him is too pervasive to calculate. More concretely, he read this work in manuscript form and saved me from several
gaffes.
So did Konrad Bieber, Richard F. Kuisel, Arno J. Mayer, and Judith H. Wishnia. I thank them all.

Arlene Jacobs typed a complicated manuscript in record time, and Carol Brown Janeway was a knowledgeable, wise, and sympathetic editor. I am indebted to Enrique Ucelay Da Cal for preparing the index.

These friends and helpers are in no way responsible, of course, for whatever errors, perversities of judgment, or downright idiosyncrasies may appear in this book. Those belong altogether to the author.

In the space of several days, we have lost all certainty. We are on a terrifying and irresistible slope. Nothing that we could fear is impossible; we can fear and imagine absolutely anything.

N
O ONE WHO LIVED THROUGH THE
F
RENCH DEBACLE
of May–June 1940 ever quite got over the shock. For Frenchmen, confident of a special role in the world, the six weeks’ defeat by German armies was a shattering trauma. For France’s allies, her shocking collapse raised doubts about further resistance to Nazism’s spread. Even Hitler, whom General Ludwig Beck, chief of the General Staff, had earnestly warned in 1938 that the French Army was “still the strongest in Europe,”
1
found himself casting about, after that much-photographed jig of triumph at the armistice-signing ceremony at Rethondes on June 25, for further plans. No one had imagined that German armies could reach the Pyrenees in a mere six weeks. The shock of this feat was all the more devastating.

This is not another book about why France fell. It is about what Frenchmen decided to do next. The two questions are hard to separate, of course. One of the first things they had to do was
to find someone to blame for the fall. Frenchmen of the Liberation charged Vichy Frenchmen with having wanted or even helped a German victory in order to further their reactionary schemes. Vichy Frenchmen charged the Popular Front, “monstrous alliance of Muscovite Communism, Masonic radicalism, and Jewish finance,” with having “precipitated France into an ideological war, after having weakened her.”
2
The Left’s mental image of the defeat was profascist officers fleeing to the rear in staff cars and profascist politicians stepping forward to take over the government. The Right’s mental image of the defeat was the fatal panic on May 13 of the 55th and 71st Infantry Divisions which allowed the German panzers to cross the Meuse near Sedan, Paris-based divisions thought to contain large numbers of Communist troops. Punishing the guilty—two sets of them—was a large part of what Frenchmen wanted to do next, in 1940 and again in 1944–46.

But it is no longer very enlightening to treat the defeat and the subsequent Vichy regime as treason or cabal. As for the defeat, the most convincing studies of the campaign on both sides make it clear that the outcome is explicable in classical military terms: troops stretched too thinly along the Meuse facing the Ardennes, where the main German attack actually fell; slow communications, which hampered French realization of where the main German thrust lay; obsolete tactics which wasted excellent tanks and artillery in static line defense; and sagging morale. Indirectly, that flabby descendant of the French Army of 1918 was the product of French politics and society, of course, but direct political or conspiratorial causes—treason, Fifth Columns, insufficient or poor matériel, Communist or Fascist refusal to fight—were peripheral influences or, at any rate, were unnecessary to explain the outcome.
3

Mummy's Favourite by Sarah Flint
Hard Ridin' by Em Petrova
Sex With the Chef (Erotica) by Abbott, Alexandrinha
The Carnelian Throne by Janet Morris
The Ships of Merior by Janny Wurts
Kaaterskill Falls by Allegra Goodman
The Wizard And The Warlord by Elizabeth Boyer
Antivirus (The Horde Series Book 1) by Michael Koogler
Operation Barbarossa and Germany's Defeat in the East by David Stahel
The Runaway by Gupta, Aritri
Our partner