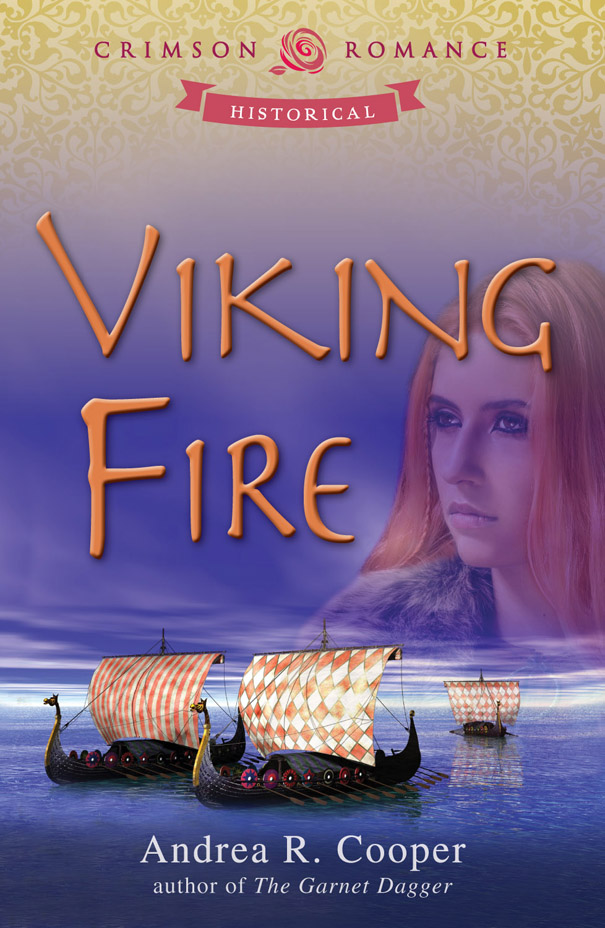 This edition published by Crimson Romance

Copyright © 2013 by Andrea R. Cooper This is a work of fiction. Names, characters, corporations, institutions, organizations, events, or locales in this novel are either the product of the author’s imagination or, if real, used fictitiously. The resemblance of any character to actual persons (living or dead) is entirely coincidental.

To my Grandmother (McLaughlin) Hyde, who was proud of her heritage, and instilled that same curiosity in me. She never knew that Vikings might have been part of our ancestry, but she would have loved that. Her childhood stories of her feisty temperament were my inspiration for the heroine and this story.

To my husband who not only showed me love is real, but opened up a world of magic and fantasy. Who encouraged me to indulge in my love of reading, and never told me to give up my dream of becoming a writer. And who wrestled with little ones so I had time to write. Thank you for your support. I love you.

To my children, Troy, Levi, and Chloe, may you always follow your dreams, and hold onto them until they come true. Never accept defeat even when friends or family doubt you.

A special thank you goes to Jennifer Lawler for giving me and this story a chance. Thank you to Ashley Myers who bled my manuscript like a ravenous vampire, but through her guidance it was reborn into a better version. The Crimson Romance editors, for polishing my story further and inspiring me to make my writing better. Thank you Crimson Romance staff for helping my story reach others.

Thank you to my writing group, friends, family, and strangers who supported me by listening to my ramblings about this book, or reading it and offering insights.

Enormous gratitude to my sister, Pam, who helped me take this story further.

“I renounce Father for this.” Kaireen threw the elderberry gown. Dressed only in her leine, she glared at the new gown on the stone floor.

“Shame on you and your children for speaking such.” Her handmaid, Elva, gathered the damask and then dusted off the rushes. “It’s a wonder one of the clim has not scolded you from your hearth for such talk.” She wore her white hair twisted in a chignon, underneath a linen head cloth. Strands of white hair poked out the sides of her covering.

“No, curse Father for a fool.” She plopped on her bed and a goose feather floated away. With a huff, she leaned against the oak headboard. Red curtains puffed like a robin’s chest around oak poles supporting her wooden canopy.

Her bare feet brushed against the stone floor. Why was she not born plain like her two older sisters? Already they had married and expected their second bairns by spring. Well, at least so far she had enjoyed twenty years of freedom.

Three years longer than her sisters. Her parents had her sisters married by their seventeenth birthday. Marriage at such a late age was uncommon, but her father had wanted suitable matches. They had enjoyed freedom longer than others. Many women were given in marriage soon after their first woman’s cycle.

Neither of her sisters had had matrimonial dreams of love matches. Both were arranged marriages. Margaret was married to an O’Neill. They courted through the long winter and past the blooming of spring with an early summer wedding.

Two months later he roamed other women’s skirts, finding too many others who were willing. Margaret’s irritation was lessened as she was ensured by the Laird O’Neill’s formal letter that no bastard would have claim to her husband’s land or rights if she were widowed.

Her other sister, Shay, and her husband did not set eyes upon each other until the wedding feast. Then they were never separated until tragedy ripped them apart.

Four months ago, her husband was killed in an unexpected skirmish against another clan. Shay refused to admit his death—until his blood-soaked body arrived with his clansmen.

For days she refused to eat or drink. Her salvation was she carried their second unborn child in her womb, and their two-year-old daughter needed a mother. The wee bairn was due this month. Kaireen feared that without the children, her sister would have wasted away without her love.

Often she wondered what her life would be like with a love like Shay’s. A love so strong it threatened her sister’s life … or would she prefer Margaret’s marriage, without love and faithfulness?

“You know your da arranged a marriage within a season.” Elva smirked.

Kaireen shook her head. “To another land holder,” and waved a hand in disgust, “not t-this heathen. Twice they raided our land in the last month alone.” She slapped away a strand of her auburn hair from her face. “Their forces choke the land like the town of Ath Cliath, the hurdled ford they call Dubhlinn.” This was in reference to the bank of wooden hurdles the Vikings built across the Liffey River. Recent whispers of a possible spy in their midst sent shivers down Kaireen’s back. What if this foreigner was the spy? What if he had fooled everyone in her clan?

Well, she would not have the wool pulled over her head by likes of a Lochlann.

“Many a raid has come from them. Now father wants me as wife to one of them?” She clenched her fists. “No, I will not marry this Viking or as we call his kind from west Scandia-Lochlanns.” She snatched the green hazel twig from Elva’s outstretched hand. Then she scrubbed her teeth.

When the foreigners had first attacked Ireland, they had been called Gaill. Over time the distinction grew between Gaills, Lochlanns, and Normanni depending on what part of Scandia they swooped down from.

Elva smiled, reminding Kaireen of the rumors of her handmaid’s uncanny foresight. Whispers of Elva making strange things happen and often blamed as the cause of Kaireen’s stubborn refusal to behave as a laird’s daughter should.

Kaireen tossed the twig in the fire burning in the hearth. After taking the woolen cloth Elva handed her, she wiped her teeth.

“You’ve not seen him yet.” Elva wiggled her brows.

“So?” Kaireen shrugged. “I would like to never see him.” She scrubbed her teeth again with the woolen fabric, and then set the cloth aside.

“Well then, would you not like to know if you have a handsome husband or not?” She waited for her response, but Kaireen scowled at her. Elva chuckled. “I would rather get a good look at him now than the morning after.”

Kaireen’s ears heated. “I am not marrying.” She shook her head for emphasis. “So there will be no morning, nor night, nor wedding.”

“If he is handsome, I may fight you for him.” Elva smiled, deepening the wrinkles around her eyes.

“Welcome to him either way.” Kaireen laughed.

“Careful.” Elva winked. “Love makes us fall hardest when we have no intention of doing so. “Especially if stubbornness or pride is involved.” She fluffed the damask gown. “Up with you now. We cannot have you going for supper in your leine.”

“With or without my leine, I do not go willingly.” Kaireen rose. She allowed Elva to yank the violet gown over her head. She pushed her arms through and her clenched hands emerged out of the long sleeves.

She brushed her pale hands down the front of the pile-weaved material. She squared her shoulders and then slipped on her leather shoes.

Plopping on her wooden stool, she suffered though Elva fixing her hair.

As Elva brushed her auburn mane, she fidgeted. Despite refusing to marry this foreigner, her stomach did a flip at the thought.
After all the Lochlanns are good for nothing but raping and pillaging!
To be safe, she would bring her dagger with her. It was waiting for her on top of her cherry wood chest. She tucked the nervousness away as her being hungry. Her handmaid twisted her locks and weaved ribbons within the waist length strands.

Then she secured the end with a ribbon sewn with pearls. Elva gestured for her to rise. Kaireen did so reluctantly.

Kaireen frowned but obeyed. At least Elva was better than her mother’s handmaid, Rhiannon. Ever since Rhiannon came to the keep fifteen years ago, she had given Kaireen nightmares. Kaireen would have asked the fairies to put a changeling in her place if she had to have her care. Her mother tried to explain why they had accepted her into their clan being that she was an O’Neill, but Kaireen had tuned her out. She did not care where the woman was from or why.

“And stop scowling or I will throw you out the window with the chamber pot waste.”

Her stomach tightened, but she bid Elva goodnight. She hiked up her gown to avoid tripping and then marched the corridor to the great hall.

Through her slippers, she felt the cold of the stone floor. A draft of wind coursed through her and she shuddered. She rounded the corner and forced her arms to her sides. She must appear strong and unnerved. Her arguments would hold no bearing if she could not stop shaking from fury.

Inside the banquet hall, the tables were covered with spiced apples, roasted carrots, asparagus, wild duck, quail, and foul smelling pig. Her father and mother sat next to each other at the middle of the high table.

Various lords, barons and their wives along with sons and daughters, laughed at an amusing story her father told. Three hunting dogs scampered around, devouring falling morsels. In a corner lay a fourth dog, shaggier than the rest gnawing on a bone.

Kaireen strolled to the low table, taking the empty seat on the bench across from her parents. Her favored place on her father’s left was already taken by a stranger with golden hair, the Lochlann stared at her. Kaireen felt the urge to check the neckline of her gown, but stifled it. A servant girl refilled his goblet with ale.

Kaireen glanced back at him. Golden hair cascaded to his broad shoulders. His azure eyes unsettled her. Her breath caught in her throat and she jerked her head away from his gaze. Didn’t the priest say something like “Breton, the devil that dragon often disguises himself as an angel of light.” She had no desire to find out from which side of Sidhe, the fairy haven, this stranger sailed from.

Silently she admonished herself to stop playing the role of a child. Thought Elva might find him handsome, well, most women would. She heard women’s gowns rustle as they leaned forward to catch a glimpse of the man from across the seas. The way these women gasped at his sailing story, any moment one of them would faint. Did they forget so soon that he was a Viking? One of many who ravaged their land, sacked their monasteries at best, and took women and children as slaves. Some of the women were fortunate enough not to be raped, others were not so lucky.

Stormy Haven by Rosalind Brett
The Way to Game the Walk of Shame by Jenn P. Nguyen
Strings of the Heart by Katie Ashley
Madison's Life Lessons by Gracen Miller
War of the Werelords by Curtis Jobling
Pleasing the Pirate: A Loveswept Historical Romance by Cullen, Sharon
Craving: A SciFi Alien Mail Order Bride Romance (TerraMates Book 8) by Lisa Lace
Friends till the End by Laura Dower
Day's End and Other Stories by H. E. Bates
See Naples and Die by Ray Cleveland
Our partner