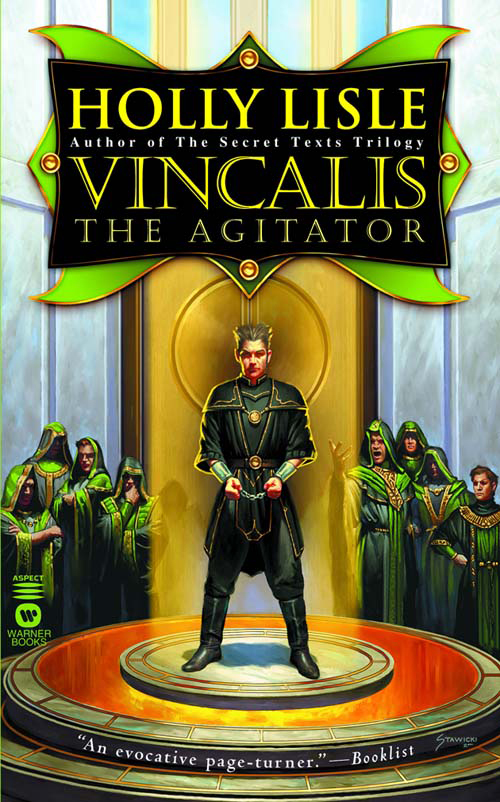 The Realm of Pain

The Hars Ticlarim was an empire built on the suffering of others. Its builders wanted it that way. They didn’t want to take
responsibility for their own spells; they didn’t want to limit what they could do merely to defense. More magic use meant
that they could expand the empire, or keep in line the parts of it already acquired. But what wizard would use magic if he
had to take the cost of the spell from his own flesh and blood and bones and life? Why would he do that, when he could channel
both the power to fuel his spell and the rebound from it into caged creatures that he had convinced himself were not truly
human? Who was going to overturn three thousand years of “this is the way we do things”?

“Tension-filled … a worthy successor to the works of Tolkien…. The pacing is fast, the dialogue believable. The writing is
poetic and lyrical, celebrating all the joys of living.”

And to
Betsy Mitchell
with thanks

The Realm of Pain

Book One: Wraith the Challenger

We were friends in a place that had no friendship, in a hell born of forced mindlessness and subterranean despair; and because
we found our impossible friendship in the Warrens, we brought forth revolution. Thus a world died, and its death bore a new
world.

D
own below, in the cages where they’d been born, Wraith’s only two friends in the world starved and waited. So the boy crouched
in the shadows, heart racing in his throat. Without food, he couldn’t go home. Without food soon, he would have no reason
to go home. The strangeness of this place frightened him, and he yearned for the familiar back ways he’d left behind. But
some instinct had drawn him to this rich and impossible place, and he promised himself he would not leave empty-handed.

This city in the sky terrified him, though. To his right, a fountain erupted from nothing, spraying streams of crystalline
liquid and gemlike shards of red and blue and green into the air. No solid structure supported this delicate miracle, but
the many people who strolled past seemed not to even notice it. All around Wraith, buildings spun of smoke and light rose
from foundations equally ephemeral, yet within them people moved easily from floor to floor, visible through lovely archways
and on broad balconies. Below his feet, through roads like ribbons of stained glass, lay the other, lesser city—his city—so
far away that streets looked like silken threads and buildings like beads sewn on fine cloth.

Wraith did not belong in these fine streets, in this city above the city, in this realm of men who would be gods. But because
he
could
come here—because the city itself let him enter—no one looked at him with suspicion or with doubt. No one questioned the
shabby nature of his clothes, the rough cut of his hair, his shoeless feet, or his gaunt child’s body. If he was here, they
seemed to think, then it could only be because he belonged here—for magic barred those who did not belong from the secrets
of Oel Artis Travia—the Aboves.

And here, where he knew he had no business, he found the thing he had so desperately sought. In the Belows, no one would think
of displaying food in the open air, where anyone might walk up to it, touch it—steal it. But here it lay, in vast and wondrous
quantities and unimaginable varieties. Wraith routinely stole thrown-away food from the containers behind stores and homes
in the Belows, but this was new food, right where he could get it.

His stomach rumbled; the fruits and vegetables, breads and cheeses, pastries and beverages spread like a banquet before him,
and he wanted so much to eat something. Anything. He had eaten scraps of bread soaked in some sort of gravy the previous day,
picking tiny maggots off before taking bites. Aside from water, he’d had nothing else.

Any bite of food at all would have been wonderful—but none of the other people wandering through the aisles ate anything while
they walked. He’d watched carefully; after years of scavenging, the knowledge that calling attention to himself would cause
him trouble had become so deeply ingrained he didn’t even need to think about it. The shoppers all around him carried baskets
that they picked up from one corner of this odd open-air market, and they wandered through the aisles, sorting through the
offered produce and putting their chosen items into their baskets. When they finished, they simply took the baskets with them
and left. They never paid, as people in the Belows paid. Wraith had seen money many times, and understood that it could be
traded for food; what he had never been able to discover was where he might get money of his own.

Here, however, no money appeared to be necessary.

So he took a basket, and like the other people, he began putting food into it. In one basket, he would have enough food for
Jess and Smoke and himself to live on for several days—and to live well. He mainly chose breads, dried meats, and pastries,
because these, from his experience, would last longest. However, he couldn’t resist just a few of the beautiful, brightly
colored fruits and vegetables. He could imagine the expressions on the faces of his friends when he returned with such a bounty.

When he finished collecting the food he wanted—not letting himself be as greedy as he desperately wished to be, but still
with a nice haul— he headed for the exit, following the precise route those before him had followed. But whereas no one paid
any attention when those others left, when he left someone said, “Hey, that boy didn’t pay!”

And then someone else said, “But he didn’t set off the alarm.”

And a woman shouted, “Master! A thief!”

A man of young middle age rose from the edge of the market, where he had been sitting, apparently doing nothing more important
than watching the water falling in the fountain. He turned, and stared at Wraith with eyes as cold as death, and pointed a
finger. “You. Stop.”

His voice had an odd echo to it. Wraith didn’t waste time contemplating what that echo might mean; he simply clutched the
basket of food to his belly and fled.

The man, strangely, laughed. In the next instant, blinding white light surrounded Wraith, making the air around him crackle
and sing, and scaring him so badly that he dropped the food. He didn’t dare stop to pick it up; the man hadn’t hurt him, but
the wizard’s next attack might be more than fancy lights and noises.

Racing for the nearest of the little side streets that fed the square, Wraith ventured a glance over his shoulder, and got
a bad shock. The square had been full of people. In just an instant, impossibly, they were gone, and only five remained: the
man, the woman who had called out that he was a thief, and three gray-suited guards. The wizard’s oily voice carried clearly
as Wraith darted down his chosen street. “That’s the one. When you catch him … bring him to me. I want to take him apart and
see what he’s made of.”

Something in the wizard’s voice told Wraith that if the wizard caught Wraith, he would kill him. But over a basketful of food?
In this place of such plenty, where people chose what they wanted and took it freely?

“We will, Master,” one of the guards said in a voice that sounded as frightened as Wraith suddenly felt.

He heard the hiss and whisper of the guards’ skimmers behind him, and he looked for cover. They could fly faster than he could
ever hope to run, and with three of them after him, he probably didn’t have much chance.

His feet pounded over the translucent pavement, and he did not let himself look down to the ground far below. They could throw
him off the road and he would die of terror long before he smashed into the pavement in the Belows.

He wished as he ran that he had not dared to chance the gate that led upward on the spiraling, spun-glass road. He wished
he had stayed firmly on the ground where he belonged. There, at least, he might have found food that would keep Jess and Smoke
alive a little longer. He would have managed, somehow, to provide for his friends the things they could not provide for themselves.
But if he died here, the two of them would be lost; they would either starve to death or return to the hell of Sleep, from
which he would never dare awaken them again.

The street down which he ran was a neighborhood thoroughfare. Behind the glass wall that edged the thoroughfare, houses built
on clouds stood inside secondary walls blocked off by high, gracefully deadly gates. The translucent white walls of the houses
gleamed with inset stones and metals, and the light that shone through them made them look as evanescent as soap bubbles,
and as lovely. The inhabitants had spun their gardens of diamonds and stars that glittered and gleamed in stunning configurations.
And singing fountains and streams that ran burbling and chuckling between invisible banks served as destinations for the gossamer
paths that led from the gates to the houses.

Wraith thought it all very lovely, and all horrifying. He saw no place to hide, for even if he could climb a wall, he could
not hide in a yard made of air and decorated by floating lights. He would be visible from any of the paths. And he didn’t
see an alley, an open gate, something that would let him escape from that whine that came closer and closer to him.

Tears clogged his throat, and the air that fought its way through the narrowed passage burned in his lungs. He thought his
heart might stop on its own before the guards behind him could touch him. Everything was closed. Locked. Impenetrable. And
the next intersection was so far away, it might as well have been on the moon.