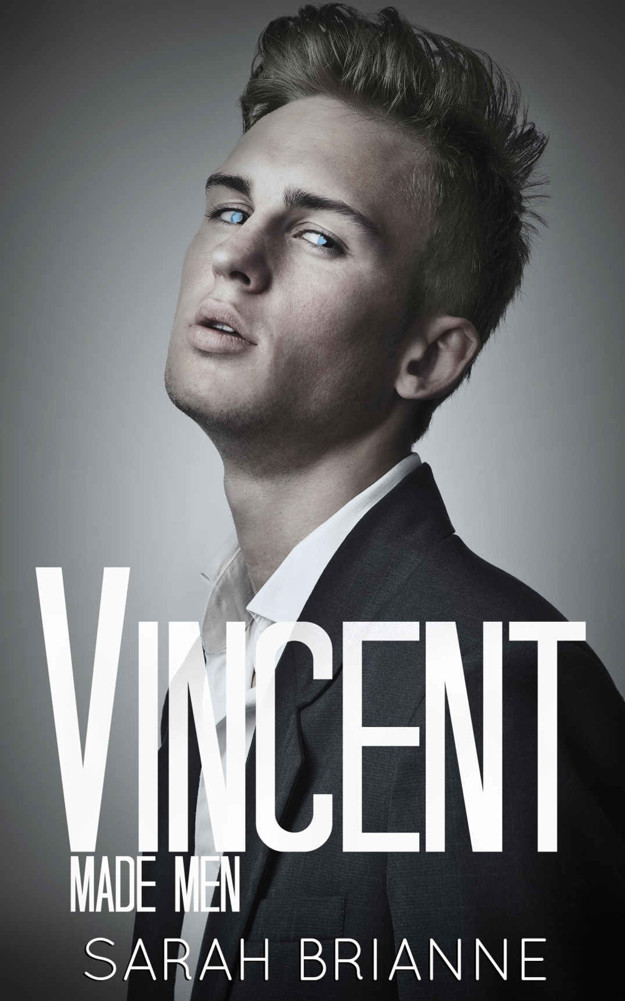 This work of fiction is intended for mature audiences only. All sexually active characters portrayed in this ebook are eighteen years of age or older. Please do not buy if strong sexual situations, violence, drugs, child abuse, and explicit language offends you.

Chapter One | Welcome to the Bowels of Hell

Chapter Two | You’ve Got This All Wrong, Motherfucker

Chapter Four | Born To Be Made

Chapter Seven | Vincent Vitale is Dead to Me

Chapter Eight | Run. Run While You Can

Chapter Nine | The Evil Stepsister and the Revolting Old Man

Chapter Ten | The Story of Vincent and Lake

Chapter Eleven | A New Beginning and A Happily Ever After

Chapter Twelve | Getting Whacked On Graduation Day Would Really Suck

Chapter Fourteen | Staring Into the Eyes of a Demon

Chapter Fifteen | Into the Lion’s Den

Chapter Sixteen | The Good Has Been Strongly Outweighed by Evil

Chapter Seventeen | We. Are. All. Insane.

Chapter Eighteen | One Sick Cycle Coming to an End

Chapter Twenty | Just Because You’re in the Itty-Bitty-Titty Committee, It Doesn’t Mean You Ain’t Got Great Tits

Chapter Twenty-Two | We’ll Be Too Outnumbered

Chapter Twenty-Three | We All Can’t Be Blessed

Chapter Twenty-Five | Was It A Mother or Daughter This Time? Or Fuck, Was It Both?

Chapter Twenty-Six | There Were Truly Some Things You Could Not Un-see.

Chapter Thirty-One | Family Men Are Not Men; We Are Fucking Deranged Animals

Chapter Thirty-Two | The Shit Was About To Hit The Fan

Chapter Thirty-Five | You Don’t Have To Worry; I Wouldn’t Fuck You In Your Dad’s House

Chapter Forty-One | Forgive Me, Father, For I Have Sinned

Chapter Forty-Two | May He Open the Gates for You

Chapter Forty-Four | We Are All Cursed

Chapter Forty-Six | Falling Into a Book

Chapter Forty-Seven | The Secret to All Made Men

Chapter Forty-Eight | In Case of an Emergency

Chapter Forty-Nine| The Devil and the Angel

Chapter Fifty-One | The Peanut Butter To Her Jelly, The Chip To Her Dip, The Pop To Her Tart

Chapter Fifty-Two | The Difference Between Life and Death

Chapter Fifty-Five | Save Me

Chapter Fifty-Nine | I Really Like It When They Scream

Chapter Sixty | I Am His. Forever.

Welcome to the Bowels of Hell

Lake closed her eyes at the sound of screeching metal hitting the pavement from the car’s muffler scraping the road. Her father’s car was an old Cadillac she was sure dated back to the eighties; it honestly needed work.
Total junker
.

Her father somehow managed to keep it working by doing his own repairs on it, using different parts from various cars and even making some himself. Lake liked to call it the
Frankenlac.

She thought he would have bought a new car sometime between 1981 and 2014, but nope. He had better ways to spend his money.
Yeah,
like betting on a horse or for chips to throw in the middle of a poker table.

Even though Lake’s father was a level-twelve gambler on the Richter scale, she wouldn’t trade him for the world because Lake knew the other side of the coin all too well.

She shook her head, unwilling to think about the coming weekend. Most teenagers would be happy it was Friday, but not her. No, her weekends were nothing except torturous.
Literally.

Her father finally reached the destination and put the car in park. “All right, kiddo. Have a good day. I’ll see you Monday.”

Lake looked away from all the stares outside of the car to meet her father’s smile. “You, too, Dad. See you Monday.” She had managed to force a smile of her own by the end of the sentence.

Lake opened the door and stepped out of the car, grabbing her bag.

That time, Lake didn’t have to force a smile. “Love you, Dad.”

As she closed the door, another scraping sound occurred. After watching her father start to drive away, she was finally able to turn around and face the teenagers’ looks. It honestly wasn’t as bad as it seemed; they always had much better things to talk about.
Not to mention a short attention span.

See, Lake wasn’t popular nor was she unpopular; she was just … well, Lake.

After a moment of complete silence, loud laughter filled the air along with some serious black smoke from her father’s car blowing a gasket. Lake put her head down and pulled up the hood from her hoodie, trying to conceal her face.

Great. It can’t get any worse, can it?
She started walking through the parking lot, weaving between the people and cars.

Beginning to hear loud music come closer, Lake turned her head to see a big, white Jeep heading her way. She had to jump back to dodge the corner of the vehicle as the brakes squealed into ‘park’.

Lake stood in shock from the close call as her heart began to pound. She knew exactly who was driving before the girl exited the Jeep along with three of her friends.

Ashley.
It was hard for her to even say Ashley’s name in her head.

“Oh, my gosh. I didn’t even see you,” Ashley said sarcastically through her snickering.

Lake decided to take the golden opportunity of being able to talk back. She didn’t get many chances.

“Oh, my gosh. Really? Maybe you need to get glasses. Quick, how many fingers am I holding up?” Lake stuck up her middle finger then heard muffled laughs.

Ashley scowled and spoke as loudly as she could. “Sorry, I don’t speak trailer trash.”

That right there was how a lot of the world saw Lake—just a piece of trash.
Trailer trash, to be exact.

Lake stood there and watched the girls giggle away in their high-pitched voices. It instantly brought her to the realization that it
could
, in fact, get worse.

Going against her better judgment, she decided to start walking again. She really hoped she wouldn’t end up regretting her little outburst to Ashley, but right then, she felt proud of herself and decided she would enjoy it.
For now, anyway.

As she got closer to the front doors, Lake looked up at the yellow sign plastered to the brick exterior of the school which said, ‘Welcome,’ right above the words, ‘Eastern Hills High.’ She thought it should be something more along the lines of, ‘
Welcome to the Bowels of Hell.’

She was finally a senior in that hellhole—
thank God
—and had just started her first week back after Christmas break.

Walking into the school, she was greeted by the warm heat. It was cold in Kansas City, Missouri, so the heat was welcome as it defrosted her nose and cheeks.

When she got to her first period Chemistry class, she went straight to her seat and as soon as her butt hit the chair, the bell rang for class to begin.

Lake stared at the empty seat next to her, shaking her head with a smile.
Every single day.

Staring at the clock for the next five minutes, not hearing a word the teacher was saying, she finally heard the door open to see a dark brunette appear and try to quietly take her seat in the hopes of going unnoticed.

Sitting down beside Lake, the girl whispered, “Do you think he noticed?”

“You have come in late every day, Adalyn,” the teacher spoke, switching topics midsentence to address the tardiness.

Adalyn let out a big breath to start her story. “I apologize, Mr. Wade. See, I’ve been having a terrible week because God decided to punish all women since Eve ate an apple. Now, my Aunt Flow is visiting—”

Lake tried desperately not to laugh.
And
that
is why she’s my best friend.

She and Adalyn had been friends since diapers. With their fathers sharing the same line of work, Lake had found herself being babysat by Adalyn’s mother when her parents wanted to go out.
Well, before they got separated.

Lake rubbed her temples, trying not to think about her coming weekend.
Don’t think about it, or you’ll ruin your day.

She was free until the last school bell rang, and then she could mope about it.

“Wow, when are they going to fix that pathetic-sounding bell?” Adalyn said as she stood and stretched from her desk.

Lake couldn’t believe class was already over. “Adalyn, you
do
know we go to public school, right?”

Adalyn put her hand on her hip. “So? My parents pay their taxes.”

“Hell if I know. The government most likely keeps it.”

Lake looked around at the dirty classroom. “Yeah, you’re right.” She finally stood, and the two walked out of the room and into the equally dirty halls.

Stopping at their lockers, Lake put in her combination and opened it before starting to empty her bag, only to refill it again with other things.

“Oh, look! The devil herself is coming our way, and I have to say her face looks unhappier than usual.” Adalyn slammed her locker shut then leaned back on it, making sure to give her bitchiest face.

Lake followed suit and attempted to put on her bitchiest face to match.
Even though it’s most likely a fail
. “Probably because I flipped her off this morning when she tried to run me over.”

“What the fuck are you laughing at, bitch?” Ashley said as she flipped her hair off her shoulder.

Adalyn could barely speak through her snickering. “I was just trying to picture your ugly face when Lake flipped you off.” When Ashley’s expression turned into a grimace, she continued, “Oh, wait, there it is!”

“You’re just fucking asking for it, aren’t you,
sister
? I didn’t want to spoil the fun, but Mommy is going out with friends tonight.”

Somehow, Lake had gotten the unluckiest hand out of life by her mom marrying the devil’s father, making them stepsisters.

Looking at Ashley’s sadistic face, Lake had to think fast. “Sorry, but Adalyn and I already made plans.”

Ashley tried not to choke on her laughter. “Yeah, like you bitches go anywhere.”

Lake had dealt with enough for the day. She was going to show Ashley. “Well, I hope you have fun tonight at home while Adalyn and I are at Poison.”

When Ashley’s mouth dropped along with her friends’, Lake smiled wide. For once in her life, she had made Ashley speechless.

Lake wasn’t stupid; she knew when to run the hell away.
Especially from evil
. She grabbed Adalyn’s arm and pushed her right past Ashley’s shocked face.

“Uhh … Lake, when did we decide to go there?” Adalyn’s face was just as shocked.

Lake instantly started to regret what she had said. “I couldn’t help it. It was word vomit!” She started to silently freak out a bit as realization hit her. “We
have
to go. You know she stalks Facebook and will expect it posted on our walls!”

“Listen, you know I’m all for shoving Poison in her face, but how the hell are we going to afford to get in there? You know my parents just bought me a new phone and clothes for the start of the semester, so they are
not
going to give me another advance on my allowance.” She was starting to freak out as much as Lake.

There is
one
way to get in…

Lake stopped walking and grabbed her friend’s shoulders. “Adalyn, how much do you love me?”