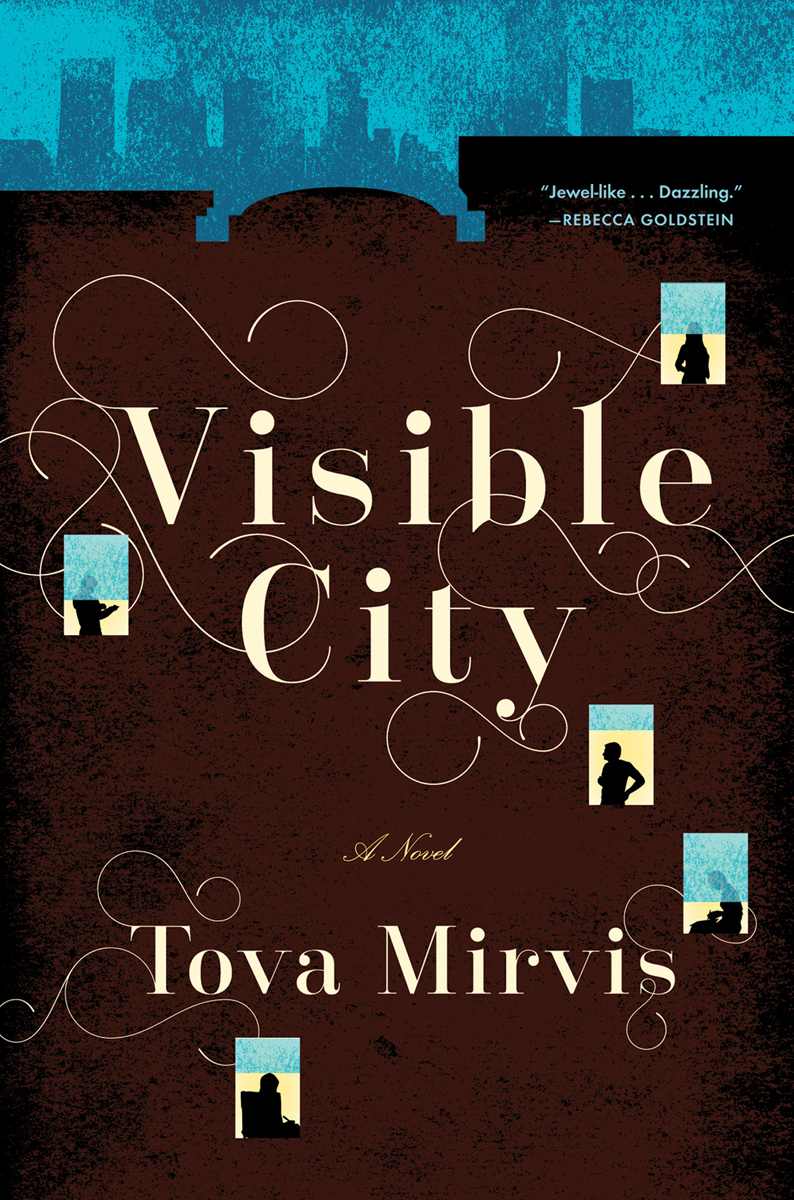 One down and two across, there she was again, a lone woman in the window, pressed close to the glass. For several days, she had been there on and off, standing in front of the window, on crutches, as if wanting to be seen.

Inside her own apartment, Nina stopped to watch. She was disturbed by the young woman’s presence, proprietary on behalf of the middle-aged couple whom she’d come to expect in that window, reading contentedly on their couch. The couple rarely talked to one another, but neither of them seemed bothered by the silence. Sometimes the husband disappeared from view, returning with two mugs in hand. Occasionally the wife stretched her legs toward her husband and he absent-mindedly grasped one of her feet. But once Nina had looked out as the wife started to walk away and the husband stood and pulled her closer. Caught off-guard by the gesture, the woman had nearly stumbled, and to steady her, he pulled her into an embrace. To everyone’s surprise, he twirled her, and for a few minutes before resuming their quiet routine, they had danced.

Nina’s living room window offered no sweeping city views, no glimpse of the river or the sky, only the ornate prewar building across the street. She and Jeremy had lived in this Upper West Side apartment for five years but still hadn’t gotten around to buying shades. Even though she looked into other people’s windows, she’d convinced herself that no one was, in turn, watching them. With two sleeping children, she couldn’t leave the apartment, but it was enough to look out at the varieties of other people’s lives. At nine in the evening the windows across the street were like the rows of televisions in an electronics store, all visible at once. Nina’s eyes flickered back and forth, but she inevitably returned to watching the same square, waiting for the couple to reappear, their quiet togetherness stirring her desire to ride out of her apartment into theirs. Hoping to find them there again, hoping that this might be the night in which they looked up from their books, she didn’t move, not until she was pulled away by a scream.

The interminable cycle of sleeping and waking had begun. In his bedroom, her three-year-old son, Max, was thrashing, yet asleep. His eyes were open but he saw no way out of his nightmare, no path to outrun whatever pursued him. “There’s nothing to be afraid of,” she whispered into Max’s ear, and his crying subsided. An hour later, it was Lily. From the bassinet that was squeezed into her and Jeremy’s bedroom, Nina picked her up to nurse. As soon as Lily latched on, her crying ceased. For the moment, there was nothing more her daughter needed.

Before either of the kids woke again, Nina went back to the window, hoping to see not just the outrageous or the extraordinary, but any truthful moment of small ordinary. During the day, every feeling came shellacked with protective plastic coating. The only language spoken was certainty. Outwardly, she was reciting the maxims along with everyone else: The kids were always delicious and she wouldn’t miss this for the world, and there was nowhere she’d rather be, and yes, it did go so fast. On the faces of other mothers, Nina sometimes caught the rumblings of discontent, but their inner lives were tucked away. Like theirs, her hands were always occupied, but while she was making dinner or bathing a child, while pushing one of them in a swing, rocking the other to sleep, her thoughts had begun to rove.

In the window across the way, there was still no sign of the couple reading. Once again, it was the young woman on crutches looking out, and Nina was tempted to wave. But that would end the illusion. Curtains would be pulled shut, lights switched off, the city’s windows suddenly empty and dark. Instead, Nina stayed hidden, and from the shadows, she watched as a young man dressed in jeans and a black T-shirt emerged from another room and joined the young woman. Wide awake for the first time all day, Nina craned her neck, watching as the couple began to argue, their gestures sharp, their bodies taut. The man tried to hug her but the woman wriggled from his grasp, put her hands over her face, shielding herself from what he was saying.

The woman turned away from the man, but he wasn’t dissuaded by her anger. He came up behind her and pressed against her. He took her crutches from her and she leaned into him as he entangled his hands in her long dark hair, ran his lips down the nape of her neck, cupped her breasts in his hands. Nina felt the woman’s resistance subsiding and she wished there was a way to draw closer to them still.

Surely they realized they were before an open window; surely that was part of the pleasure. Could they see her breathing their every breath, feeling their every touch? The woman turned around, her back now to Nina, as the man carefully helped her to the couch where he knelt in front of her and pulled down her pants. As their dark clothes unpeeled, giving way to pale flashes of skin, Nina was inside her own body yet inside theirs as well. The woman’s earlier reluctance was gone. She wasn’t held back by her injured foot. Her thin body wriggled out from underneath and she climbed astride him. Her back arched, her body bare, she turned her face to the window, looking directly at the spot where Nina was standing.

She saw the look of defiance and understood the bold exhibitionist plea. But it was something else that made her want to press herself to the glass pane and move closer still. This woman was trying to let her know,
I see you, I know you are there.
In response, she wanted to reach her hand across and loosen the constraints of her own life as well. The city had cracked momentarily apart, a slivered opening in the larger night. Nina might be home with her kids, another interminable night with Jeremy at work, but she was also outside, part of the thrumming city. Nina waited for the reading couple to emerge from some back room where they’d been hiding and join the younger couple on their couch. She waited to see everyone’s inner thoughts transmitted in flashes of light long and short. For every apartment in every building to light up. For neighbors everywhere to strip down, lay themselves bare. For the couples across the way to raise their windows and invite her in.

The bedroom window faced the construction site next door, so close that on the loudest days, the glass rattled and a layer of dust covered every surface. The city had emerged from a harsh winter into a springtime of construction, the streets now blooming with the branches of cranes and metal vines of scaffolding.

Claudia went to the window where she struggled to lift the heavy wooden sash.

It was a strange pleasure and so unlike her, yet what harm could it do? How different was she from the opera singer who practiced every evening, from the trombone-playing teenager who lived beneath them? She was one more voice in the city’s cacophonous orchestra. In whatever form, whatever language, everyone had something to say.

“Shut the fuck up!” Claudia screamed, harboring the fantasy that when she stopped, nothing would move, speak, rattle. The city would take on the quiet of North Easton, Massachusetts, where she’d grown up. The cars on Broadway, the hordes of pedestrians, would all stand still, the Walk signs commanding Don’t Walk, the traffic lights turning red.

“Do you feel better?” Claudia heard, and turned in surprise.

Leon was watching from the doorway, staring with what seemed to be admiration. But before she could decode his expression, let alone enjoy it, his face darkened to bafflement: a crazy stranger had taken the place of his wife. It wasn’t the first time she’d screamed at the construction workers, but never when Leon was home.

“I didn’t say anything,” Claudia joked, hoping to restore herself in both Leon’s mind and her own. She considered telling him how overwhelmed she felt by the noise, but he wouldn’t understand that in order to survive the emotional and physical saturation of living here, she had begun conjuring imaginary paths of escape: were she to walk deeper into Riverside Park, she’d arrive not at the highway or river, but at a bucolic green field. But with the noise, those pathways were sealed off. The walls closed in.

“They’re building a thirty-story building outside our window. You should be used to it,” Leon said as she flipped through the blue pages at the front of the phone book to find the number for the local precinct.

“I’d like to make a complaint,” Claudia said to the desk sergeant who answered. When she explained the problem to the person on the other end of the phone, she was told to call 311, the number for non-emergency situations. When she did, a recording informed her that she’d reached the City of New York and invited her to leave a message. Unwilling to give up, she called the local precinct again, and this time the officer asked for the location of the site. A rush of optimism: There were people to call when something was wrong. Someone out there was still in charge.

“I don’t think so. She had a hard night. I heard her and Steven fighting.”

“Yes, but I would think that he’d at least offer
to stay for a few more days,” Claudia said.