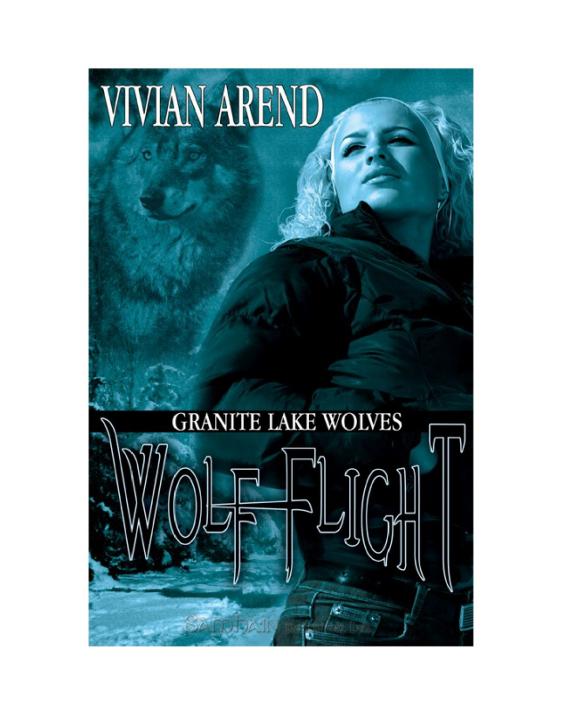 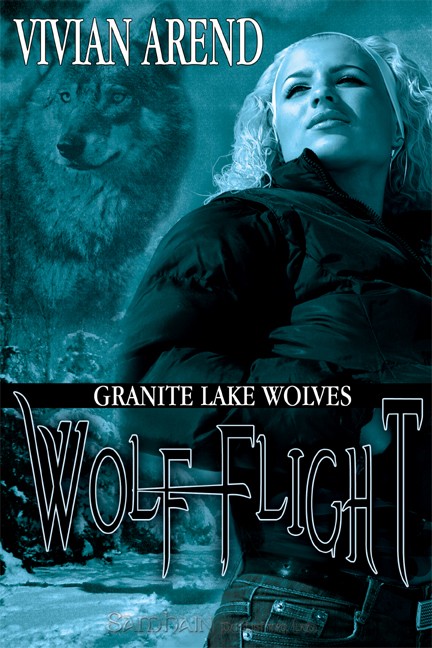 Tad Maxwell’s workaholism serves to keep his bush-pilot company in the air, and

his inner werewolf in check. In the two years since he discovered his heritage,

he’s resisted the longing to test the power of his wolf side. It would mean

Then Missy Leason re-enters his life. Ten years ago, their teenage attraction

never went beyond hand-holding. Now their chemistry is off the charts, pushing

him closer to the step he’s not sure it’s safe to take, especially with a human.

But Missy is more like Tad than he realizes. She’s wolf too, and a wolf pack is a

dangerous place to have secrets. Missy’s Alpha has sniffed out her carefully

hidden Omega powers. Her first response: run from the corrupt Alpha’s plan to

make her his mate. Step two: get to Tad, and hope like hell his untapped powers

are strong enough to negate her own.

Every touch with Missy is hot, hot, hot, but even finding out she’s pure wolf

doesn’t solve Tad’s dilemma. Is she using him, or are they truly destined mates?

Only one thing is certain. He will defend her to his last breath—on his terms. Even

if it means losing his life.

on the dance floor. Sarcasm, wilderness cabins and hot nookie back by popular

The Whistler pack house was crowded after dinner, with small groups gathered

around the room talking amongst themselves. Conversations quieted for a

prime seats before the huge stone fireplace. An icy warning trickled up Missy’s

spine, and she gave up on the discussion in front of her. She rose from her chair

and headed quietly toward the exit, weaving between the couches and recliners

that filled the meeting and relaxation area for the pack.

Missy had no illusions about the precariousness of her position. As the widow of

a high-ranking wolf, even one whose position had come from his family

relationship instead of his power, she was an obvious target for any of the wolves

looking to improve their standing in the pack.

Which would be, oh, pretty much everyone. Only she wasn’t worried about all of

them, just one very dangerous individual.

keep her secret. Hidden her developing skills away not only from her late husband

but the rest of them.

Even now her Alpha’s gaze burned as she walked with her head down,

area toward her apartment at the back of the complex.

She turned toward him, the hair on the back of her neck standing upright as a

shiver of disgust raced over her skin. She had hoped to avoid this summons for far

longer. Stopping a polite distance away to stand before the massive fireplace,

Missy clutched her fingers together and averted her eyes at the last second.

“Jeff has been gone for a month now,” he noted, his long well-groomed fingers

tapping on the arm of the overstuffed leather chair. His stylish business suit,

clean-shaven chin and immaculately groomed hair sharply contrasted with what

she knew of his personality. She’d seen his wolf kill more often than necessary,

even for an Alpha trying to maintain order in a large pack.

Missy rocked on her feet uneasily. Doug rose from his seat to tower over her

petite frame, the heat from his body close enough to overwhelm the fire’s

warmth. She stared away from him, looking over the heads of the wolves

sprawled on the couch immediately in front of them.
Don’t let him know how

much you loathe him. Don’t show any sign of disrespect.
Others in the room

conversations. Only the wolf enforcers she spotted scattered inconspicuously

throughout the room tensed, ready to spring into action if needed.

The level of paranoia her Alpha encouraged among his warriors shocked her. Did

they really think she would challenge Doug? It seemed few pack members were

aware he was less than the honourable businessman he pretended to be. Missy

wondered how much the Alpha shared with his closest allies, how many of his

wrongdoings the other leaders of the pack approved. Or were the Beta and the

“Does it bother you to hear me talk about my brother? Do you miss him that

much?” Doug’s refined voice prickled in her ears. “I didn’t think you pined for his

conversation or longed for his arms to hold you at night.”

He laughed softly and the sound grated on her nerves like nails on a blackboard.

abilities, including an increased sense of others’ motivations. The evil Doug delved

into permeated every fiber of his being, and Missy turned her head away to avoid

showing her disgust. She swallowed hard and forced down the emotions that

threatened to engulf her. Her anger, her fear. The almost overwhelming desire to

turn and flee from his presence.

She couldn’t run, not yet. She needed more time. Time to find an escape from

the trap she knew closed around her as each day passed.

Doug ran a finger down her cheek, plucking at a blonde curl, and her gorge rose.

Missy concentrated on presenting a calm façade, forcing her eyes to blink

naturally as she slowed her pulse, her breathing. Calming all the telltale signs that

could alert this powerful werewolf of her intentions.

He was her brother-in-law, her Alpha, but she refused to let him control her. The

finger continued a slow path down her body as she stood stock-still.

“Jeff never did know what a treasure he had, did he?” Doug asked, his dark voice

dirty like an oily slick over her skin. He leaned close to whisper in her ear. “My

Her eyes flickered for a split second before she tamped down the surprise. How

could he have discovered what she had worked so hard to hide? She was still

learning to control her untrained skills, including the ability to read and

manipulate others’ emotions, to calm and ease them. Omegas were rare and

highly desired among the shifter community. With appropriate guidance, she

would be a blessing to a pack. Under the wrong influence, her skills could be

at the present time.

Doug chuckled, a light sound that nevertheless made her skin crawl. “Oh, yes, I

looking for it.” He flicked a finger over his head and the wolves seated around

them dispersed, conversations fading away to leave them intimately alone.

Doug lifted her chin with a thick finger, tilting her face as if he were examining a

side of beef at the butcher’s. He snorted and spoke softly, his words for her alone.

“When I blackmailed your family into your marriage to my brother, I hoped you

would end up permanently linked with him. With a mate connection between

you, I would have mastered you both. But like everything else Jeff touched, he

ruined my plans. He wasn’t even strong enough to trap you with a false

Missy shuddered inside at the thought. Like every wolf she longed to find her

mate, the one who matched her not only physically but emotionally. Forced into a

loveless marriage to save her family had been bad enough, but it would have

been far worse to imagine herself belonging body, mind and soul to Jeff simply

because of overactive pheromones.

A strong hand wrapped around her neck, pulling her closer as Doug stared, his

nostrils flaring as he examined her face minutely. “He was woefully delinquent in

training you to be obedient. But he’s gone now, that unfortunate incident, you

from Doug’s mind to hers. Images flashed—ropes cut by knives, a falling body,

between them as clearly as if he had spoken, the knowledge a gift and curse of

being an Omega wolf.

His own brother had killed her husband. Closing her eyes to shut out the pain,

she forced her tears to remain hidden. She may not have loved Jeff, but he hadn’t

deserved to die in that manner. The crackle of the fire sounded loud and eerie as

Doug grunted. “Hmmm, you are good. So much potential, so much I’ll be able to

do with you once you’re properly trained.” Doug loosened his grip for a second

and slipped his fingers into her hair, tugging it hard enough to bring tears to her

Her blood pounded, her mouth suddenly gone dry, and she focused on making

Doug forget her. She was nothing, she was nondescript. Reaching deep into the

part of herself she had hidden away for years, she attempted to calm her Alpha.

her core, being sure to make them nonthreatening, noninteresting. Above all

nonsexual because if Doug decided to claim her physically she’d be lost. She

would shatter in a million pieces and never be free from him.

He turned away from her and her panic lightened, fear relaxing as he reacted to

her stimulus. She drew in an uneven breath, preparing to step back and retreat

from his presence. Suddenly, his hand shot out and wrapped around her throat,

squeezing tight enough to hurt and she froze, physically and mentally. He snarled

my brother was, so you were able to control him. Don’t make the mistake of

assuming you can use your skills on me. I
will
kill you if you try that again.” He

squeezed a final time before releasing her, his hand moving to cup her face as she

His voice was a mere whisper, menacing in its softness, the polite trappings of

civilization hiding the monster. “I’m a patient man, Missy. I waited until the

opportune moment to take over the pack. I have maneuvered tirelessly to

arrange deals that will soon bring in the financial resources I desire. I can wait for

you until the timing is right. Since appearances are so important to wolves, I

wouldn’t dream of taking you yet. I don’t want to draw any attention from the

council. Even though you obviously are hurting, missing your mate.” His fingers

trailed along her cheek and she shivered involuntarily. “Poor thing, everyone

knows how devastating it is to lose a mate. It is fortunate I’m without a partner.

As both Alpha and your brother-in-law, I’m the only one who can replace him for

He dropped his hand away, sliding it intimately down her body.

If she had truly been mated, Doug’s words would have been true. The loss of a