Read Voices From Chernobyl: The Oral History of a Nuclear Disaster Online

Voices From Chernobyl: The Oral History of a Nuclear Disaster 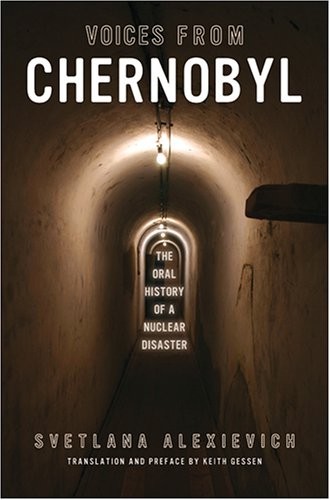 Svetlana Alexievich was born in the Ukraine and studied journalism at the University of Minsk. She has received numerous awards for her writing, including a prize from the Swedish PEN Institute for “courage and dignity as a writer.” She won the Nobel Prize for Literature in 2015.

Keith Gessen is coeditor of
n
+ 1 magazine. He has written about Russia for
The Atlantic
and
The New York Review of Books.
He lives in Brooklyn, New York.

The Oral History of a Nuclear Disaster

TRANSLATION AND PREFACE BY KEITH GESSEN

On September II, 2001, after the first hijacked plane hit the World Trade Center, emergency triage stations were set up throughout New York City. Doctors and nurses rushed to their hospitals for extra shifts, and many individuals came to donate blood. These were touching acts of generosity and solidarity. The shocking thing about them was that the blood and triage stations turned out to be unnecessary. There were few survivors of the collapse of the two towers.

The effects of the explosion and nuclear fire at the Chernobyl power plant in 1986 were the exact opposite. The initial blast killed just one plant worker, Valeriy Khodomchuk, and in the next few weeks fewer than thirty workers and firemen died from acute radiation poisoning. But tens of thousands received extremely high doses of radiation—it was an accident that produced, in a way, more survivors than victims—and this book is about them.

Much of the material collected here is obscene. In the very first interview, Lyudmilla Ignatenko, the wife of a fireman whose brigade was the first to arrive at the reactor, talks about the total degeneration of her husband's very skin in the week before his death, describing a process so unnatural we should never have had to witness it. “Any little wrinkle [in his bedding], that was already a wound on him,” she says. “I clipped my nails down till they bled so I wouldn't accidentally cut him.”

Some of the interviews are macabre. Viktor Verzhikovskiy, head of the Khoyniki Society of Volunteer Hunters and Fishermen, recalls his meeting with the regional Party bosses a few months after the explosion. They explained that the Zone of Exclusion, as the Soviets termed the land within thirty kilometers of the Chernobyl power plant, though evacuated of humans, was still filled with household pets. But the dogs and cats had absorbed heavy doses of radiation in their fur, and were liable, presumably, to wander out of the Zone. The hunters had to go in and shoot them all. Several other accounts, particularly those about the “deactivation” of the physical landscape in the Zone—the digging up of earth and trees and houses and their (haphazard) burial as nuclear waste—also have this quasi-Gogolian feel to them: they are ordinary human activities gone terribly berserk.

In the end it's the very quotidian ordinariness of these testimonies that makes them such a unique human document. “I know you’re curious,” says Arkady Filin, impressed into Chernobyl service as a “liquidator,” or clean-up crew member. “People who weren't there are always curious. But it was still a world of people. The men drank vodka. They played cards, tried to get girls.” Or, in the words of one of the hunters: “If you ran over a turtle with your jeep, the shell held up. It didn’t crack. Of course we only did this when we were drunk.” Even the most desperate cases are still very much part of this “world of people,” with its people problems and people worries. “When I die,” Valentina Panasevich's husband, also a “liquidator,” tells her as he succumbs to cancer several years after his stint at Chernobyl, “sell the car and the spare tire. And don't marry Tolik.” Tolik is his brother. Valentina does not marry him.

Svetlana Alexievich collected these interviews in the early to mid 1990s—a time when anti-Communism still had some currency as a political idea in the post-Soviet space. And it's certainly true that Chernobyl, while an accident in the sense that no one intentionally set it off, was also the deliberate product of a culture of cronyism, laziness, and a deep-seated indifference toward the general population. The literature on the subject is pretty unanimous in its opinion that the Soviet system had taken a poorly designed reactor and then staffed it with a group of incompetents. It then proceeded, as the interviews in this book attest, to lie about the disaster in the most criminal way. In the crucial first ten days, when the reactor core was burning and releasing a steady stream of highly radioactive material into the surrounding area, the authorities repeatedly claimed that the situation was under control. “If I'd known he’d get sick I'd have closed all the doors,” one of the Chernobyl widows tells Alexievich about her husband, who went to Chernobyl as a liquidator. ‘T d have stood in the doorway. I'd have locked the doors with all the locks we had.” But no one knew.

And yet, as these testimonies also make all too clear, it wasn't as if the Soviets simply let Chernobyl burn. This is the remarkable thing. On the one hand, total incompetence, indifference, and out-and-out lies. On the other, a genuinely frantic effort to deal with the consequences. In the week after the accident, while refusing to admit to the world that anything really serious had gone wrong, the Soviets evacuated tens of thousands of residents and then poured thousands of men into the breach. They dropped bags of sand onto the reactor fire from the open doors of helicopters (analysts now think this did more harm than good). When the fire stopped, they climbed onto the roof and cleared the radioactive debris. The machines they brought broke down because of the radiation. The humans wouldn’t break down until weeks or months later, at which point they’d die horribly. In 1986 the Soviets threw untrained and unprotected men at the reactor just as in 1941 they'd thrown untrained, unarmed men at the
Wehrmacht,
hoping the Germans would at least have to stop long enough to shoot them. And as the curator of the Chernobyl Museum correctly explains, had this effort not been made, the catastrophe might have been a lot worse.

Much has changed in the world since these interviews were completed in 1996. Less so in Belarus. With Slobodan Milosevic in the dock at The Hague, Aleksandr Lukashenka is now Europe's most brazen dictator, confidently heading for a fourth presidential term after repeatedly “disappearing” opposing politicians. Though usually deaf to European protests, Lukashenka did in August 2005 grant amnesty to scientist Yuri Bandazhevsky, imprisoned in 1999 after publicizing research that indicated that the effects of the Chernobyl accident were more serious than previously understood, especially in children. Bandazhevsky and his old friend and colleague Vasily Nesterenko (interviewed on page 205) have been vocal in their insistence that current studies of Chernobyl after-effects are inadequate and that the danger has not passed.

They are not being heard. A recent UN report, issued in

September 2005 by the multi-agency Chernobyl Forum, predicts that the total number of deaths attributable to the accident will be four thousand—mostly residents and “liquidators” (clean-up workers) affected during the first days of the fire at the reactor. The report points cheerily to the fact that the vast majority of the several thousand children diagnosed with Chernobyl-related thyroid cancer have been cured—failing to indicate the likelihood of further health effects down the road. Based primarily on scientific work done under the aegis of the International Atomic Energy Agency, whose Chernobyl track record has not been good (in 1986 the IAEA blamed the disaster on operator error; it shifted the blame to the plant's criminally flawed design only after the Soviet Union had ceased to exist), the report nowhere mentions the work of Bandazhevsky or Nesterenko, nor the fact that Belarus is a police state. Not implausibly, it argues that the chief cause of Chernobyl-related illness will turn out to have been the mass evacuations ordered by the Soviet government shortly after the accident. Incredibly, it goes on to opine that the biggest problem currently affecting residents of the Chernobyl region is an excess of pessimism. But plans for returning more potentially dangerous land to agricultural use continue, and children are getting sick. You’d be pessimistic, too.

There are no nuclear power stations in Belarus. Of the functioning stations in the territory of the former USSR, the ones closest to Belarus are of the old Soviet-designed RBMK type. To the north, the Ignalinsk station, to the east, the Smolensk station, and to the south, Chernobyl.

On April 26, 1986, at I :23:58, a series of explosions destroyed the reactor in the building that housed Energy Block
#4
of the Chernobyl Nuclear Power Station. The catastrophe at Chernobyl became the largest technological disaster of the twentieth century.

For tiny Belarus (population: 10 million), it was a national disaster. During the Second World War, the Nazis destroyed 619 Belarussian villages along with their inhabitants. As a result of Chernobyl, the country lost 485 villages and settlements. Of these, 70 have been forever buried underground. During the war, one out of every four Belarussians was killed; today, one out of every five Belarussians lives on contaminated land. This amounts to 2.1 million people, of whom 700,000 are children. Among the demographic factors responsible for the depopulation of Belarus, radiation is number one. In the Gomel and Mogilev regions, which suffered the most from Chernobyl, mortality rates exceed birth rates by 20%.

As a result of the accident, 50 million Ci of radionuclides were released into the atmosphere. Seventy percent of these descended on Belarus; fully 23% of its territory is contaminated by cesium-137 radionuclides with a density of over 1 Ci/ km
2
. Ukraine on the other hand has 4.8% of its territory contaminated, and Russia, 0.5%. The area of arable land with a density of more than I Ci/km
2
is over 18 million hectares; 2.4 thousand hectares have been taken our of the agricultural economy. Belarus is a land of forests. But 26% of all forests and a large part of all marshes near the rivers Pripyat, Dniepr, and Sozh are considered part of the radioactive zone. As a result of the perpetual presence of small doses of radiation, the number of people with cancer, mental retardation, neurological disorders, and genetic mutations increases with each year.

The Hole in the Wall by Lisa Rowe Fraustino
The Middle Kingdom by Andrea Barrett
Know the Night by Maria Mutch
Please Me: Parisian Punishment by Jennifer Willows
Cuentos by Juan Valera
Coast to Coast by Jan Morris
Ramon by Lexi Buchanan
A Fool for a Client by David Kessler
Ending ELE (ELE Series) by Gober, Rebecca, Courtney Nuckels
Push Comes to Shove by Oasis
Our partner