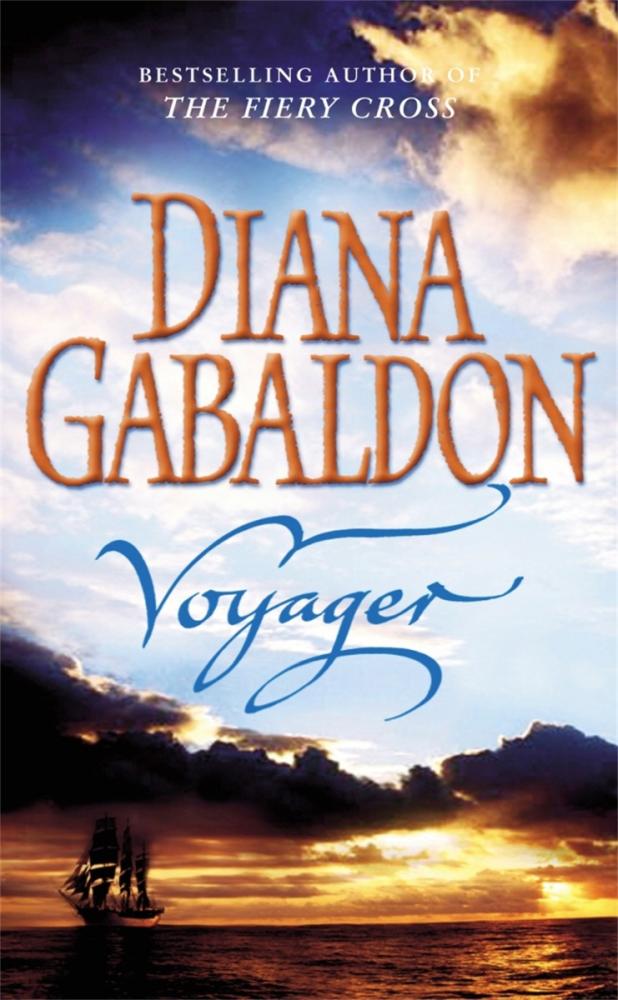 Part One- Battle, and the Loves of Men

5 To Us a Child is Given

6 Being Now Justified by His Blood

Part Three- When I Am Thy Captive

7 A Faith in Documents

39 Lost, and by the Wind Grieved

Part Eight- On the Water

46 We Meet a Porpoise

51 In Which Jamie Smells a Rat

58 Masque of the Red Death

59 In Which Much is Revealed

60 The Scent of Gemstones

63 Out of the Depths

When I was small, I never wanted to step in puddles. Not because of any fear of drowned worms or wet stockings; I was by and large a grubby child, with a blissful disregard for filth of any kind.

It was because I couldn’t bring myself to believe that that perfect smooth expanse was no more than a thin film of water over solid earth. I believed it was an opening into some fathomless space. Sometimes, seeing the tiny ripples caused by my approach, I thought the puddle impossibly deep, a bottomless sea in which the lazy coil of tentacle and gleam of scale lay hidden, with the threat of huge bodies and sharp teeth adrift and silent in the far-down depths.

And then, looking down into reflection, I would see my own round face and frizzled hair against a featureless blue sweep, and think instead that the puddle was the entrance to another sky. If I stepped in there, I would drop at once, and keep on falling, on and on, into blue space.

The only time I would dare to walk through a puddle was at twilight, when the evening stars came out. If I looked in the water and saw one lighted pinprick there, I could splash through unafraid—for if I should fall into the puddle and on into space, I could grab hold of the star as I passed, and be safe.

Even now, when I see a puddle in my path, my mind half-halts—though my feet do not—then hurries on, with only the echo of the thought left behind.

What if, this time, you fall?

Part One- Battle, and the Loves of Men

Many a Highland chieftain fought,
Many a gallant man did fall.
Death itself were dearly bought,
All for Scotland’s King and law.
—“Will Ye No Come Back Again”
April 16, 1746

He was dead. However, his nose throbbed painfully, which he thought odd in the circumstances. While he placed considerable trust in the understanding and mercy of his Creator, he harbored that residue of elemental guilt that made all men fear the chance of hell. Still, all he had ever heard of hell made him think it unlikely that the torments reserved for its luckless inhabitants could be restricted to a sore nose.

On the other hand, this couldn’t be heaven, on several counts. For one, he didn’t deserve it. For another, it didn’t look it. And for a third, he doubted that the rewards of the blessed included a broken nose, any more than those of the damned.

While he had always thought of Purgatory as a gray sort of place, the faint reddish light that hid everything around him seemed suitable. His mind was clearing a bit, and his power to reason was coming back, if slowly. Someone, he thought rather crossly, ought to see him and tell him just what the sentence was, until he should have suffered enough to be purified, and at last to enter the Kingdom of God. Whether he was expecting a demon or an angel was uncertain. He had no idea of the staffing requirements of Purgatory; it wasn’t a matter the dominie had addressed in his schooldays.

While waiting, he began to take stock of whatever other torments he might be required to endure. There were numerous cuts, gashes, and bruises here and there, and he was fairly sure he’d broken the fourth finger of his right hand again—difficult to protect it, the way it stuck out so stiff, with the joint frozen. None of that was too bad, though. What else?

Claire. The name knifed across his heart with a pain that was more racking than anything his body had ever been called on to withstand.

If he had had an actual body anymore, he was sure it would have doubled up in agony. He had known it would be like this, when he sent her back to the stone circle. Spiritual anguish could be taken as a standard condition in Purgatory, and he had expected all along that the pain of separation would be his chief punishment—sufficient, he thought, to atone for anything he’d ever done: murder and betrayal included.

He did not know whether persons in Purgatory were allowed to pray or not, but tried anyway. Lord, he prayed, that she may be safe. She and the child. He was sure she would have made it to the circle itself; only two months gone with child, she was still light and fleet of foot—and the most stubbornly determined woman he had ever met. But whether she had managed the dangerous transition back to the place from which she had come—sliding precariously through whatever mysterious layers lay between then and now, powerless in the grip of the rock—that he could never know, and the thought of it was enough to make him forget even the throbbing in his nose.

He resumed his interrupted inventory of bodily ills, and became inordinately distressed at the discovery that his left leg appeared to be missing. Sensation stopped at the hip, with a sort of pins-and-needles tingling at the joint. Presumably he would get it back in due time, either when he finally arrived in Heaven, or at the least, at Judgment Day. And after all, his brother-in-law Ian managed very well on the wooden peg he wore to replace his missing leg.

Still, his vanity was troubled. Ah, that must be it; a punishment meant to cure him of the sin of vanity. He mentally set his teeth, determined to accept whatever came to him with fortitude, and such humility as he could manage. Still, he couldn’t help reaching an exploratory hand (or whatever he was using for a hand) tentatively downward, to see just where the limb now ended.

The hand struck something hard, and the fingers tangled in wet, snarled hair. He sat up abruptly, and with some effort, cracked the layer of dried blood that had sealed his eyelids shut. Memory flooded back, and he groaned aloud. He had been mistaken. This was hell. But James Fraser was unfortunately not dead, after all.

The body of a man lay across his own. Its dead weight crushed his left leg, explaining the absence of feeling. The head, heavy as a spent cannonball, pressed facedown into his abdomen, the damp-matted hair a dark spill on the wet linen of his shirt. He jerked upward in sudden panic; the head rolled sideways into his lap and a half-open eye stared sightlessly up behind the sheltering strands of hair.

It was Jack Randall, his fine red captain’s coat so dark with the wet it looked almost black. Jamie made a fumbling effort to push the body away, but found himself amazingly weak; his hand splayed feebly against Randall’s shoulder, and the elbow of his other arm buckled suddenly as he tried to support himself. He found himself lying once more flat on his back, the sleeting sky pale gray and whirling dizzily overhead. Jack Randall’s head moved obscenely up and down on his stomach with each gasping breath.

He pressed his hands flat against the boggy ground—the water rose up cold through his fingers and soaked the back of his shirt—and wriggled sideways. Some warmth was trapped between them; as the limp dead weight slid slowly free, the freezing rain struck his newly exposed flesh with a shock like a blow, and he shivered violently with sudden chill.

As he squirmed on the ground, struggling with the crumpled, mudstained folds of his plaid, he could hear sounds above the keening of the April wind; far-off shouts and a moaning and wailing, like the calling of ghosts in the wind. And overall, the raucous calling of crows. Dozens of crows, from the sound.

That was strange, he thought dimly. Birds shouldn’t fly in a storm like this. A final heave freed the plaid from under him, and he fumbled it over his body. As he reached to cover his legs, he saw that his kilt and left leg were soaked with blood. The sight didn’t distress him; it seemed only vaguely interesting, the dark red smears a contrast to the grayish green of the moor plants around him. The echoes of battle faded from his ears, and he left Culloden Field to the calling of the crows.

He was wakened much later by the calling of his name.

No, he thought groggily. I’m not. Wherever he had been while unconscious, it was a better place than this. He lay in a small declivity, half-filled with water. The sleeting rain had stopped, but the wind hadn’t; it whined over the moor, piercing and chilling. The sky had darkened nearly to black; it must be near evening, then.

“I saw him go down here, I tell ye. Right near a big clump of gorse.” The voice was at a distance, fading as it argued with someone.

There was a rustle near his ear, and he turned his head to see the crow. It stood on the grass a foot away, a blotch of wind-ruffled black feathers, regarding him with a bead-bright eye. Deciding that he posed no threat, it swiveled its neck with casual ease and jabbed its thick sharp bill into Jack Randall’s eye.

Jamie jerked up with a cry of revulsion and a flurry of movement that sent the crow flapping off, squawking with alarm.

There was a squelching through boggy ground, and a face before him, and the welcome feel of a hand on his shoulder.

“He’s alive! Come on, MacDonald! D’ye lend a hand here; he’ll no be walkin’ on his own.” There were four of them, and with a good deal of effort, they got him up, arms draped helpless about the shoulders of Ewan Cameron and Iain MacKinnon.

He wanted to tell them to leave him; his purpose had returned to him with the waking, and he remembered that he had meant to die. But the sweetness of their company was too much to resist. The rest had restored the feeling in his dead leg, and he knew the seriousness of the wound. He would die soon in any case; thank God that it need not be alone, in the dark.

“Water?” The edge of the cup pressed against his lip, and he roused himself long enough to drink, careful not to spill it. A hand pressed briefly against his forehead and dropped away without comment.

The Assassin and the Desert by Sarah J. Maas
Rise of the Retics by T J Lantz
Emilie's Voice by Susanne Dunlap
Sway With Me (Inspiring the Greek Billionaire) by Shelly Bell
I Am Morgan le Fay by Nancy Springer
Double Cross in Cairo by Nigel West
Dead Europe by Christos Tsiolkas
Love LockDown by A.T. Smith
the STRUGGLE by WANDA E. BRUNSTETTER
Park Lane South, Queens by Mary Anne Kelly
Our partner