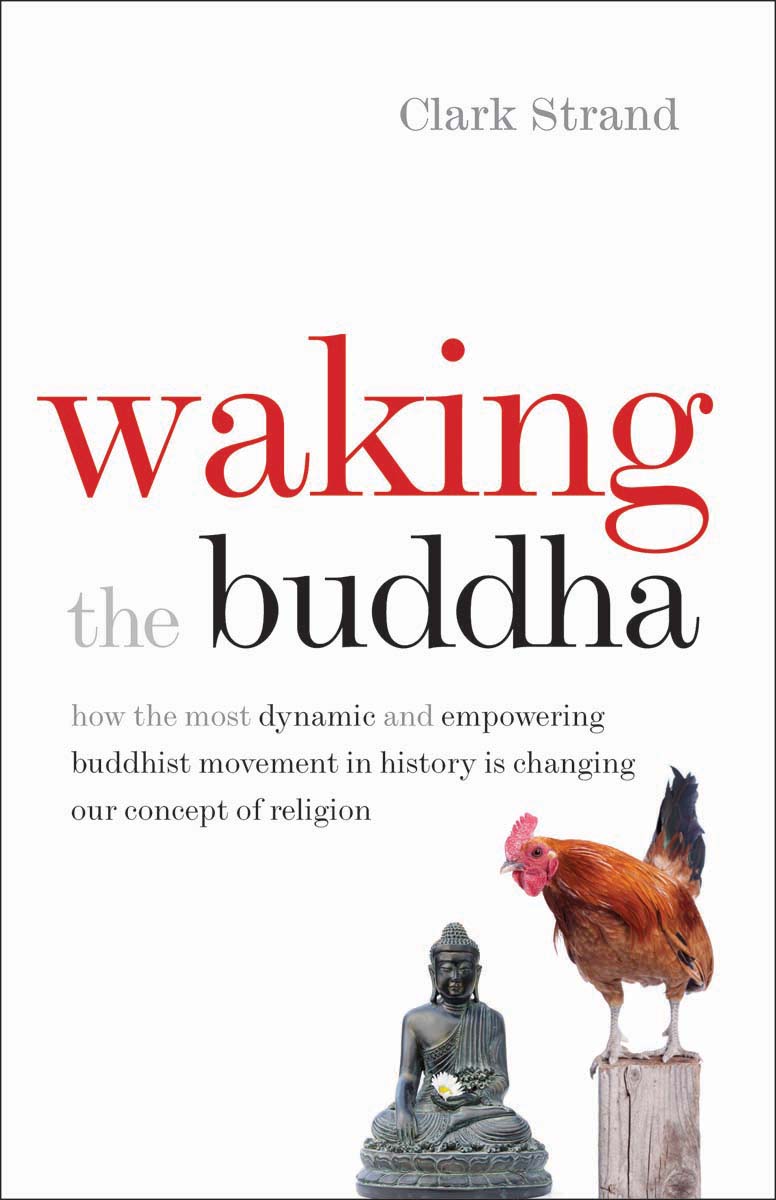 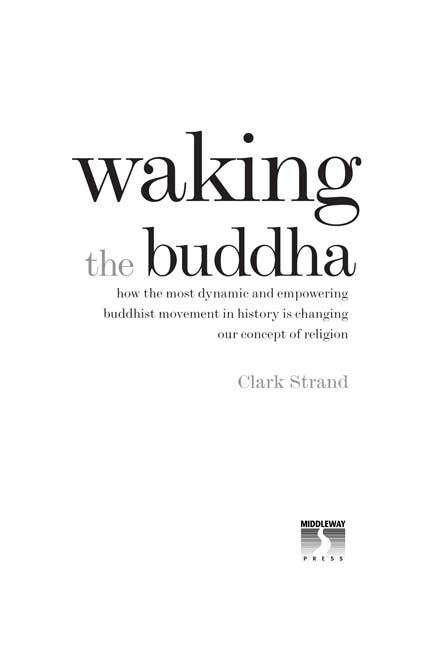 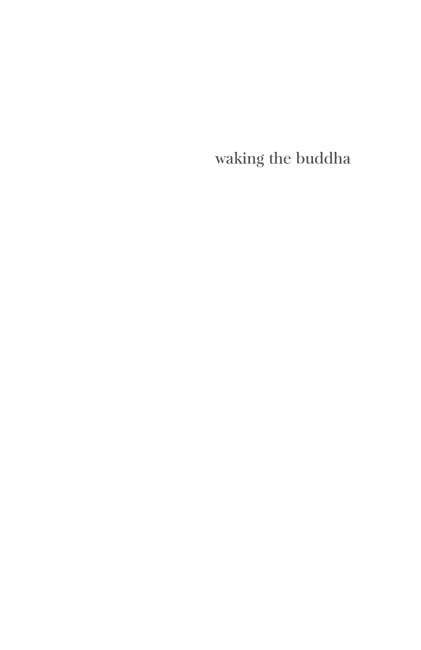 A division of the SGI-USA

Â Â Waking the Buddha : how the most dynamic and empowering Buddhist movement in history is changing our concept of religion / Clark Strand.

Middleway Press is committed to preserving ancient forest and natural resources. We are a member of the Green Press Initiativeâa nonprofit program dedicated to supporting book publishers in maximizing their use of fiber, which is not sourced from ancient or endangered forests. We have elected to print this title on Natures B19 Smooth Antique, made with 30 percent post consumer waste. For more information about the Green Press Initiative and the use of recycled paper in book publishing, visit
www.greenpressinitiative.org

the spark
an idea ahead of its time

a change in the life of one individual

the flame of reform

a thing of lasting beauty

the foundation
the creation of the soka gakkai

just one verse of the lotus sutra

the power of ideas

opening a way toward the future

the development
the discovery of modern buddhism

glimmers of a global movement

passing the flame of reform

the completion
the spread of religious humanism

the culture of mentorship

the oneness of mentor and disciple

even to the fiftieth person

the future
a religion for the twenty-first century

the foundation for a happy life

boomers, buddhism, and beyond

facing the challenge ahead

entering the age of life

I
N
F
EBRUARY OF
2003, just weeks before the U.S. invasion of Iraq, I came across a photograph of some Buddhist prayer beads made in a Tokyo prison during World War II. With limited resources to draw from, a prisoner of conscience had improvised them using the bottle caps from his daily milk ration.

I found the “beads” in the photograph strangely moving, even beautiful. Not that they were elegantly made. Far from it. The cardboard bottle caps were dark from handling and worn to the point of falling apart. Nevertheless, the photo inspired me to learn more about the imprisonment of Josei Todaâthe man who had made them and then later became the president of the Nichiren Buddhist lay group the Soka Gakkai (Value Creation Society). A month later, I wrote a short article for an American Buddhist magazine that began with a series of questions:

What goes through the mind of the person who chooses to go to jail rather than betray his spiritual convictions, the person who, refusing to be swept up in the militant patriotism that precedes most wars, chooses loneliness and isolation instead? It is hard enough to imagine how such a person passes the days and weeks. What of the hours and minutes? Isn't it conceivable that the resolve of the heart might collapse under the weight of even a single moment?

The article went on to describe how Toda and his mentor, Tsunesaburo Makiguchi, had been arrested by the government as “thought criminals” because of their refusal to support the Japanese war machine. Makiguchi had died in prison, but Toda survived, renewing his resolve day by day, bottle cap by bottle capâa moment's weight â¦ added to another moment's weight â¦ added to another.

Sometime later, when a friend asked why I'd become interested in the Soka Gakkai, I knew the answer right away. Toda hadn't collapsed. He'd borne up under the weight of countless moments when it would have been easier to accept defeat.

One of the most striking things about the Soka Gakkai from a Buddhist point of view is its emphasis on attaining victory in ordinary lifeâsometimes under
extraor
dinary circumstances, like the ones Toda had endured. Soka Gakkai members chant the mantra-like title of the Lotus Sutra, Nam-myoho-renge-kyo, as a way of harnessing the universal life force inherent in their own bodies and minds. According to the teachings of Nichiren Buddhism, that mantra activates the basic, positive creative energy of the universeâa force that animates all sentient beings, driving them to grow and express their true nature eternally, from one lifetime to the next. By chanting Nam-myoho-renge-kyo and working for the happiness of others, Nichiren Buddhists seek to improve their current life condition and demonstrate “actual proof” of the Buddhist principle that all things are interconnectedâthat an inner change in the life of one individual can trigger outer changes in their community, their environment, and ultimately the world at large.

That principle of interconnectedness corresponds with what we know today about particle physics and planetary ecology, both of which support the view that all things are intimately interrelated and dependent upon one anotherâthat nothing exists as separate and alone. Before Nichiren, however, that teaching was mostly theory, a topic for discussion between religious intellectuals or debate among cloistered monks and nuns. It didn't have much application outside of the sedate (some might say sleepy) world within temple or monastery walls. The idea that individuals could use it to awaken to the possibilities for change in everyday life, producing positive effects in their own lives and the lives of those around them, honoring their responsibilities to society and to the life of the planet itselfâthat had never been put to the test.

Nichiren changed all that. He staked his life on that theory, making it the basis of his teaching and standing alone against the corrupt military government of thirteenth-century Japan. Like Toda and Makiguchi seven centuries later, he believed that religion should serve the lives of individuals rather than merely functioning as a pawn of the state. And, also like Toda and Makiguchi, he ran afoul of the government and of the religious institutions that supported it. Twice attacked, twice exiled, and once sentenced to execution for his uncompromising views, Nichiren refused to back down from his belief that ordinary people could change their karma and attain enlightenment in this lifetime simply by chanting Nam-myoho-renge-kyo. It was a revolutionary vision of Buddhism that empowered lay people to take charge of their spiritual and material destiny, and he was widely condemned for it.

Today, you might call Nichiren Buddhism “an idea way ahead of its time.” After Nichiren's death, the school of Buddhism he founded grew steadily but never became the dominant voice of Buddhism in Japan. When Toda left prison in 1945, it was just what it had been for centuries: a small sect with a big teaching that had never really come into its own. Were it not for his efforts, and those of his successor, Daisaku Ikeda, it is unlikely that anybody outside of Japan would ever have heard of it. As it is, the Soka Gakkai, the largest and most influential lay group in Buddhist history, has now spread the teachings of Nichiren Buddhism to some 192 countries around the globe. How and why that happened, and what it means for religion in the twenty-first century, is the subject of this book. It's the story of an idea whose time has come, and of the people who made it a reality.

the flame of reform

L
IFE IS A STRUGGLE.
That is one way of understanding the first noble truth of Buddhism: that life is suffering. Given that reality, it is no surprise that human beings the world over tend to experience their lives in terms of whether they are winning that struggle or notâ in other words, in terms of gain and loss. And yet, these are seldom emphasized by religion. Marx called religion “the opiate of the masses.” Granted, he judged religion mostly on the basis of its failures; nevertheless, it is fair to say that religions the world over have tended to prefer conformity over revolution, complacency over action. Religious teachings offer inspiration and consolation but rarely spark the fire of revolution. Societies prefer the elegant confinement of the candle on the altar over the open flame of reform.

Religions usually grow out of some revolutionary impulse initiallyâin the beginning they may attempt to address racial or ethnic discrimination or economic inequality. However, as time goes on they invariably choose stability over all else, even at the expense of the ongoing spiritual evolution of humankind. Having woken us up initially, they allow us to grow drowsy again, sometimes for decades or centuries on end. That is probably why I felt drawn to the story of Toda's resistance to the war. It was the wake-up call I had been expecting from American Buddhism in the lead-up to the Iraq War, a call that never actually arrived.

In retrospect, I'm not sure why I expected American Buddhism to provide such a call. With the exception of the Soka Gakkai International (SGI), all major schools of Buddhism in America have their origins in the teachings of pre-modern traditions, the appeal of which rests largely upon their antiquity. They are attractive to most converts precisely because they do
not
engage modern issues but provide some solaceâin the form of ritual or silent meditationâfrom the issues and problems of modernity. This may account, in part, for the popularity of the weekend or week-long retreat model so prevalent in American Buddhism, which provides a kind of “spiritual vacation” from many aspects of modern cultureâsuch as most forms of current communication, including phone, e-mail, the Internet, and news bulletins. It is ironic that American Buddhism won the bulk of its initial converts during the countercultural years of the 1960s only to become religiously complacent, if not exactly conservative in the usual sense, as it grew in subsequent decades.

A Vineyard Killing by Philip R. Craig
To Touch a Warrior by Immortal Angel
Orient Fevre by Lizzie Lynn Lee
Tender Love by Irene Brand
The Saint Goes On by Leslie Charteris
How to Sew a Button: And Other Nifty Things Your Grandmother Knew by Bried, Erin
Silencing Eve by Iris Johansen
Where the Allegheny Meets the Monongahela by Felicia Watson
Override (Glitch) by Heather Anastasiu
The Heart Denied by Wulf, Linda Anne
Our partner