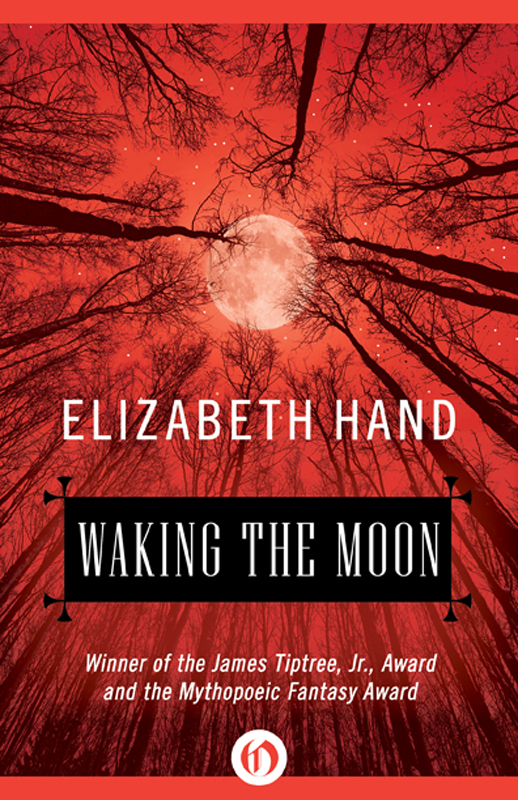 Anyway those things would not have lasted long. The experience

of the years shows it to me.

in some haste and stopped them.

The beautiful life was brief.

But how potent were the perfumes,

on how splendid a bed we lay,

to what sensual delight we gave our bodies.

An echo of the days of pleasure,

an echo of the days drew near me,

a little of the fire of the youth of both of us;

again I took in my hands a letter,

and I read and reread till the light was gone.

And melancholy, I came out on the balcony—

came out to change my thoughts at least by looking at

a little of the city that I loved,

a little movement on the street, and in the shops.

CR Cavafy, “In the Evening,” translated by Rae Dalven

5. The Sound of Bones and Flutes

7. Night of the Electric Insects

8. Twilight at the Orphic Lodge

19. Fire from the Middle Kingdom

A Biography of Elizabeth Hand

If all those young men were like hares on the mountain

Then all those pretty maidens would get guns, go a-hunting.

If all those young men were like fish in the water

Then all those pretty maidens would soon follow after.

If all those young men were like rushes a-growing

Then all those pretty maidens would get scythes, go a-mowing. 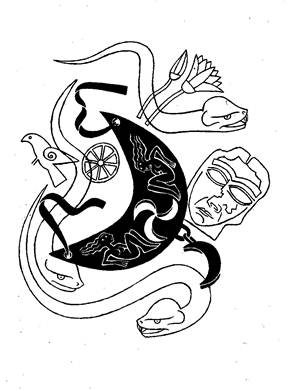 T
HEY NEVER FOUND HER.
Nothing at all: no clothes, no jewelry, no bones or teeth or locks of auburn hair. No lunula. Maybe that’s why I never truly mourned Angelica. Oh, I
grieved,
of course, with that hopeless misery one reserves for lost youth or broken chances or a phantom limb. That was how I wept for Angelica; not the way I’d raged when I lost Oliver. Not even the muted anguish I’d felt during all those lost years in Dr. Dvorkin’s carriage house.

This was a small grief, really: because how can I believe that Angelica is really
gone,
any more than a storm or hurricane is gone? The clouds pass over, the skies clear; but there are still the shattered homes and decapitated trees, the dunes given to the sea. And always there will be that clutch in the chest when you see a darkness on the horizon, a greening in the evening sky.

Like Oliver, she was beautiful; she was so beautiful. And she was kind and smart and funny, the sort of friend you dream of having. The kind of friend
I
dreamed of having, and somehow she found me, just as Oliver had. If she was a force of nature, she was still human; at least until the end. How can I believe she is gone?

But she
is
gone, and I have so little to remember her by. If only I had written more about my friends, or done something with my nearly empty college notebooks. If only I had taken pictures, or saved Oliver’s funny crabbed drawings, and the delicately calligraphic notes Angelica pinned to the door of my room in Rossetti Hall with their faint musky scents of sandalwood and oranges!

But I kept nothing of Oliver and Angelica, not a single real photograph or letter or drawing. Only a black-and-white Polaroid that Oliver gave me shortly after we met, showing his shoe—a rather worn black wing tip—and part of his bare ankle; that and the sea urchin lamp Angelica sent me our first Christmas.

That’s all. Though I have more of them within me now than they could ever know. Perhaps, that is almost enough.

I
MET THEM IN
Magic, Witchcraft, and Religion. A fitting place, that magician’s grove within the enchanted forest that was the Divine, where Balthazar Warnick presided at his podium and wore a hand-painted paisley tie and three-piece Fergus Corméillean worsted suit to every session—even though there were only seven of us students, and the dyspeptic rathators hissed as though black winter gnawed at the stained glass windows, instead of the city’s sultry Indian summer.

I had taken a seat at the very back of the room. It was my first day of classes, my first official day at the Divine. I had arrived the previous Friday, meekly following the Strong Suggestion listed in the Introductory Handbook—a slender volume printed by the University on heavy cream-colored paper meant to invoke the physical and intellectual weight of vellum.

It is strongly suggested that underclassmen attending the university for the first time arrive during the week of September 1st, 1975, when Orientation and Introductory Sessions will be held for both students and those parents who wish to attend.

At the top of every page glowered the University’s coat of arms, a Gryphon rampant and Pelican
gules,
the latter tearing at her own breast to feed her young. Beneath them was a motto—

Life without learning is death.

—and the school’s name spelled out in glorious sweeps of gold and blue and crimson.

The University of the Archangels and Saint John the Divine.

The Divine, as I learned to call it within a few hours of my arrival.
School,
my mother called it, as when after the five-hour drive she stood with me in my dormitory room, surrounded by overstuffed boxes, and said, “Well, good luck at School, Katie.”

The drive had been long and hot and anxious, my mother and father veering between elation and depression at seeing the last of their six children plummet from the nest. My parents had married for love, high school sweethearts from Astoria, Queens. My mother still had the accent—muted to be sure, but jarring, when you took in that delicate face beneath fiery curls. My mother was an Irish beauty of the old school. Not so my father, who stood six-foot-four in his bare and uncommonly ugly feet and—notwithstanding the degrees from Saint Bonaventure and Fordham and the elevated position at IBM—looked more like Victor McLaglen than Jack Kennedy. My two sisters were the beauties, my three brothers rebels who, as adults, made good.

Me? I was the smart one, the loner, the hapless rebel and youngest by many years. Katherine Sweeney Cassidy, named for my maternal grandmother Katherine Sweeney; with my mother’s grey eyes and my father’s feet, Katie to the family but Sweeney now to the world. Sweeney to the Divine.

After we carried my things into the dormitory we had a quick and uneasy lunch at the local Holiday Inn, where far jollier family groups yelled boisterously to new arrivals and where our waitress seemed to know every customer by name, except for us. Afterward, my parents departed almost immediately. My mother confessed years later that they had been too heart-stricken to stay, but I didn’t know that at the time. They kissed me, my father still smelling slightly of ketchup, and then climbed into the blue Volvo wagon that would bear them north again. I waved as the car shot with nervous speed back into the stream of traffic on North Capitol Street. Then I ran my damp palms across the front of the maroon floral skirt my mother had laid out on my bed the night before (newly purchased from Lord & Taylor for the occasion, it was the first and only time I ever wore it) and slowly walked back to the dorm.

This was the first time it struck me that there might be disadvantages to a happy childhood. Everywhere I looked there were people who belonged here. Longhaired sunburned girls in puckered cotton sundresses, stretched out on the grass and smoking black cigarettes. Long-haired boys who pulled clinking green bottles from a cooler and toasted each other in sure, joyous cadences. In the near distance, beneath the shadows of the immense and baroque Shrine itself, the tiny white-clad figures of nuns in their summer habits walked with heads thrown back, diamond light sparkling on their sunglasses. A heavyset man in a yarmulka stood on a set of curved steps that spiraled down from one of the Shrine’s promontories like a stairway in a Dr. Seuss book. As I watched he removed his yarmulka and absently patted his cheeks with it. The heat was intense. The oily scent of car exhaust wafting over from North Capitol Street vied with that of roses, which grew as profusely on the grounds of the Divine as within a public garden. My skirt hung limply about my knees, my long-sleeved cotton blouse felt heavy and moist as wet wool. As I dragged myself up the sidewalk to Rossetti Hall, a boy in a dashiki shirt bumped into me.

“Oops—sorry—” he mumbled, not even glancing aside as he hurried onto the lawn surrounding Rossetti Hall. Beneath one of its elaborate diamond-paned windows he stopped and bellowed “LINNNN—DDDDAA!” Above me windows flew open. Tanned faces stared down, laughing.

No one took any notice of me at all. I flushed. My clothes burned against my skin. I looked away and ran up the steps and inside Rossetti Hall.

Somehow I got through that first weekend. My room turned out to be a surprisingly comforting haven, cool and quiet and mine alone. Like all of the buildings at the Divine, Rossetti Hall was a huge and Gothic edifice, vine-hung, sweet with the carnal scent of wisteria blossoms. Beneath its walls wandered a weird profusion of nuns and rabbis and sikhs and friars, and others of even more dubious spiritual provenance: Hare Krishnas, earnest Moonies, witches and druids nouveaux. The effect was superbly and spookily medieval, with color and comic relief thrown in by a small but noisy undergraduate population bearing the last battered standards of 1960s
gambado.
I was sorely aware of how drab I looked and felt.

The White City by John Claude Bemis
Death's Privilege by Darryl Donaghue
The Fire of Life by Hilary Wilde
Pretty Little Dead Things by Gary McMahon
The Baby Swap Miracle by Caroline Anderson
Timothy Boggs - Hercules Legendary Joureneys 03 by The Eye Of The Ram
Saving Wishes (The Wishes Series) by GJ Walker-Smith
Song of the Fireflies by J. A. Redmerski
Butcher by Rex Miller
The Last Innocent Man by Margolin, Phillip
Our partner