Read Walden on Wheels: On the Open Road from Debt to Freedom Online

Walden on Wheels: On the Open Road from Debt to Freedom 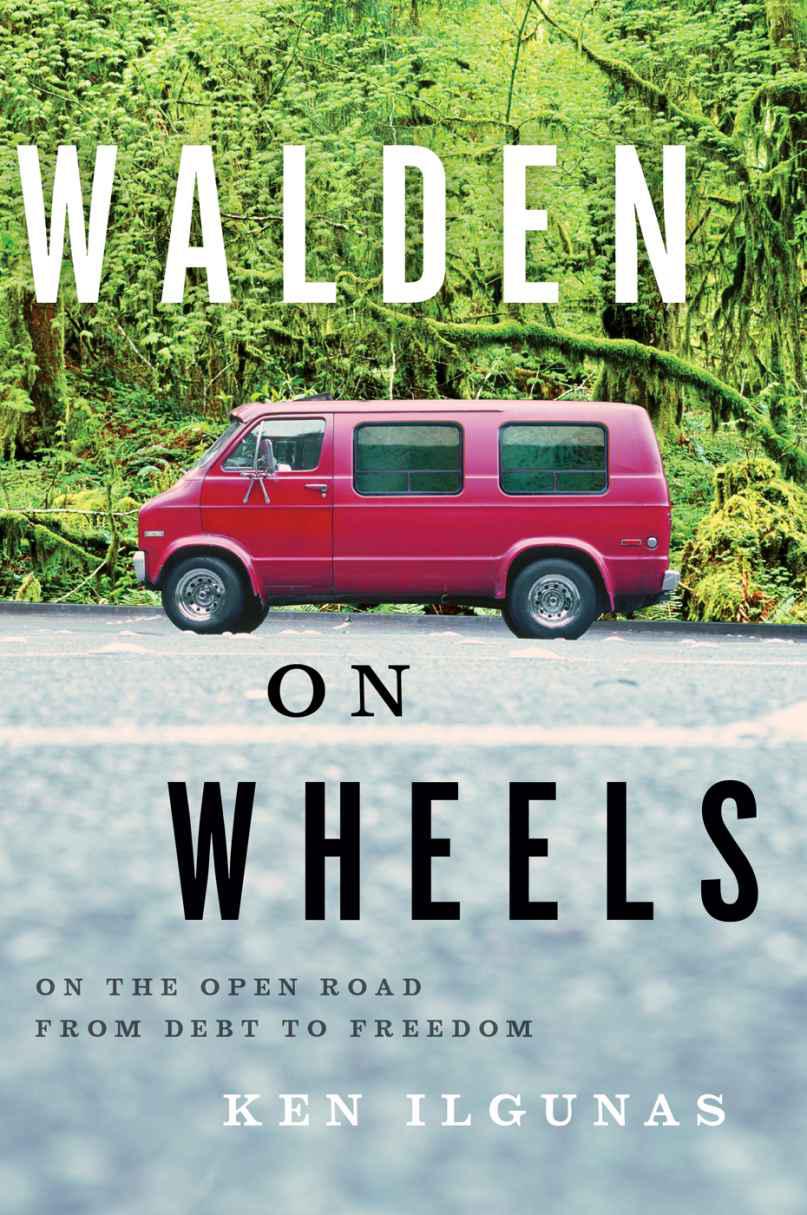 INTRODUCTION, OR WHAT’S A “VANDWELLER”?

Day One of Vandwelling Experiment

Ten percent of all author royalties will be donated to The Wilderness Society, an advocate and protector of America’s wild places.

Remember who you wanted to be.

— BUMPER STICKER ON VOLVO IN THE HOME DEPOT PARKING LOT

I tried to write this book as true to life as possible. It bears mentioning, though, that I changed the names and altered details of several characters. And, on a few occasions, I took liberties with the chronology when I did not think the authenticity of the story would be compromised.

O
N A SPRING EVENING
in 2009, in a campus parking lot at Duke University, I was lying on the floor of my van, trying to hide from view.

This is it,
I thought.
They know.

I was wearing nothing but my boxer shorts, splayed out on the carpet, face up, like a scarecrow toppled by the wind. My arms and legs took up pretty much my whole central living space: the section of the van in between the bed in the very back and the driver and passenger seats up front. Next to my head was my three-drawer plastic storage container, which, in addition to serving as my counter for cooking, held pretty much everything I owned: stacks of cereal boxes, bags of rice and beans, and a jumble of miscellaneous items, including sewing supplies, utensils, duct tape, and recycled Ziploc bags.

It was a sunny day. As on all sunny days, it was far hotter inside the van than it was outside. It was unreasonably hot. Scalding hot. Africa hot. The van was a moist 98°F womb, and I, a red-faced fetus wishing for an orifice to wriggle out of. Between the North Carolina heat and the very realistic possibility
of
they
knowing about my secret, my glands thought it was a good idea to discharge all reserves of sweat, darkening the hue of my underwear, imprinting a moist outline of my body onto the carpet, and encasing me in a slick film of perspiration.

Moments before, when I’d caught a glimpse of the vehicle that had parked next to me, I’d been cooking my evening meal on an isobutane backpacking stove on top of my storage container. As soon as I saw his car through my window, I pulled the blinds down, turned off the stove, and flattened myself on the floor. It was a security guard’s patrol car.

I wondered,
What was it that gave me away? Did someone see me get into the van? Has someone ratted me out?

I held my breath as the security guard shut off the engine. His door croaked open and slammed. His heels clicked like Gestapo jackboots across the asphalt.

If the security guard was inspecting the van, as I thought he was, then I knew things must have looked awfully strange to him. All the window blinds had been pulled down. There was a large black sheet of fabric hanging behind the passenger and driver’s seats that prevented him and all other passersby from seeing what was in the back of the van. Though he couldn’t see me because of the blinds and the sheet, he could freely inspect the van’s front area, where he was sure to make note of the laundry basket on the passenger seat, spewing out pant legs and sweaty white tees. Or he might pause to wonder why the windshield had fogged up (from the steam from my cooking pot). Or why odors of broccoli and onion were leaking out of the windows I left ajar.

I knew that, any second, he’d tap on my window and I’d have no choice but to answer his questions and explain to him why I was half-naked, why I was cooking a meal in a van, and why I’d been secretly living in a campus parking lot for the past four months.

I knew how the dominoes would fall: the university’s administration would revoke my parking permit, I’d be banned from
all campus parking lots, and, without the van, I’d be forced to adopt some conventional and unaffordable style of living—one where I’d have to rent an apartment, hang decorative curtains, and buy a rug to tie the room together. And I’d have to break the promise I told myself I wouldn’t break four months earlier: I’d have to go back into debt.

For the whole 2009 spring semester, as a graduate student in Duke’s liberal studies program, I’d been secretly living in my van. And this was the moment I’d been dreading.

INTRODUCTION,
OR
WHAT’S A “VANDWELLER”?

A
“
VANDWELLER”—AS DEFINED
by vandwellers—is, essentially, a person who lives in a vehicle. The type of vehicle the vandweller lives in doesn’t matter, so long as the lifestyle is simple and the home has wheels.

It may come as a surprise to some readers that there are more than a couple of people living in their vehicles right now. At this moment, one of them might be reading Edward Abbey with the glow of her headlamp in a Walmart parking lot. A man and his dog may be driving west on the I-90 in a 1985 Dodge cargo van with the windows rolled down. A few retirees might have formed a wagon circle in the desert outside of Quartzsite, Arizona.

They’re parked inconspicuously in front of hotels and mechanic shops. They’re asleep on your city street one night and gone the next. They’re America’s modern-day vagabond; the twenty-first century’s tramp and hobo, drifter and gypsy. They’re people who take pride in living lives of thrift, adventure,
and independence. They’re unburdened by belongings, unfastened from earthly foundations, and unruffled with the prospect of going to the bathroom in an empty Gatorade bottle. They’re vandwellers.

Over the years, I’ve learned that—behind a vandweller’s decision to move into what is often a cramped, smelly, heatless, air-conditioning-less, “you mean it doesn’t come with an espresso wine tower?!” vehicle—there is always a story. And because the vandweller made such a decision because they were lured to the road by powerful, romantic longings, or because he or she was forced to resort to desperate measures in desperate times (or because “there’s just something wrong with him,” as my mother would put it), it’s usually a good story.

A great many people have asked me what it’s like to live in a van. They’ve inquired how I fed myself, how I stayed warm, and how I kept it a secret, among other practical queries. But the most frequent question asked pertains to
why
I did it.

From other vandwellers’ stories, I’ve learned that the vandweller doesn’t become a vandweller simply by purchasing a van. Rather, some personal change or transformation must first occur. The answer to the question about why I lived in a van is this book, which means that the following story isn’t so much about a van but about student debt, and wilderness, and all the people and places and journeys that have made me the person I am today, who happens to be okay with tight quarters and dubious hygiene.

So in order to properly tell my story, I ought not begin with the moment I bought a Ford Econoline in a used car lot outside of Raleigh, North Carolina, in January 2009. Rather, I should start years before—four years before, to be exact—when I was an indebted twenty-one-year-old about to finish my fourth year of college.

or
My Attempt to Pay Off $32,000
in Student Debt with a Useless
Liberal Arts Degree

I
DREAMED OF THE GRIZZLY BEAR.
It was my only recurring dream. Ever since I’d turned sixteen, I would dream this dream over and over again. It was always the same: A half mile south of my parents’ home, in a neighboring suburban development, I’d happen upon a grizzly bear grazing on someone’s lawn. It would spring up onto its hindquarters, inspecting me from the top of his bulky blond tower of fat and fur. I’d look back at it, paralyzed, awestruck, exhilarated.

That was it. I had this dream repeatedly. And afterward—when I’d be lying in bed in that half-dreaming, half-awake state—the dream would feel so real that I’d often wonder if it was in fact a dream, or if it was a distant memory that I could only vaguely recollect. I’d always wanted to believe that I’d really seen the bear, but I knew that that was impossible because: 1) There are no grizzlies in the suburbs of western New York, or anywhere near New York for that matter; and 2) I’d somehow gone the first twenty-one years of my life without experiencing anything even remotely interesting.

It was my fourth year of college. Many weekday evenings and
weekend mornings, I’d tie an orange apron around my waist and collect orange shopping carts strewn across a giant Home Depot parking lot in Niagara Falls, New York. I’d gather a dozen at a time, press them together, pivot them around curbs, and march them to the vestibule inside. When all the carts had been accounted for, I’d work inside the store, stacking lumber, folding cardboard, reorganizing shelves, emptying garbage bins, and lending a hand to any customers who needed help loading drywall or bags of Quikrete. I was a cart-pusher.

For your ordinary college student, pushing carts wasn’t the worst job local industry had to offer. I’d considered it a step above jiggling a
WE BUY GOLD
sign for the local pawnshop and a few steps below the indentured servitude of an unpaid internship, where students, though unpaid, could at least hope that their career paths were leading them to a more prosperous destination than stacking four-by-fours in the lumber department.

The Traitor by Grace Burrowes
Eyewitness (Thriller/Legal Thriller - #5 The Witness Series) (The Witness Series #5) by Forster, Rebecca
All Shall Be Well by Deborah Crombie
Whisper of Scandal by Nicola Cornick
Pieces of Us by Hannah Downing
Save Me by Eliza Freed
Tasting Fear by Shannon McKenna
The Line That Binds Series Box Set by J. M. Miller
Philip Van Doren Stern (ed) by Travelers In Time
After the Bite by Lovato, David, Thomas, Seth
Our partner