Read Walking Back to Happiness Online

Walking Back to Happiness 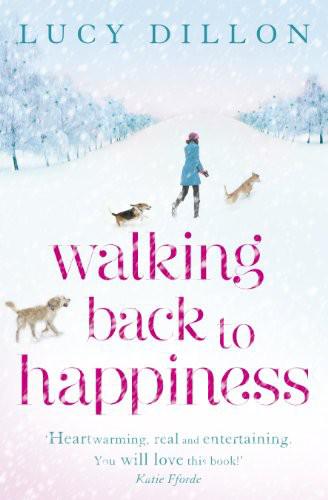 Walking back to Happiness

Walking back to Happiness

First published in Great Britain in 2010 by Hodder & Stoughton

has been asserted by her in accordance with the Copyright,

All rights reserved. No part of this publication may be reproduced, stored in

a retrieval system, or transmitted, in any form or by any means without the

prior written permission of the publisher, nor be otherwise circulated in any

without a similar condition being imposed on the subsequent purchaser.

Walking a dog is like having a personal trainer, without the shouting or the fees. There’s no escaping your daily exercise session when your canine trainer is gazing up at you with baleful ‘walk me!’ eyes, but once you’re out, the fresh air is free, and the ever-changing view and conversations are so much better than you’d get on a sweaty treadmill.

If you don’t have your own dog, there are many local rescue shelters crying out for volunteers to treat their residents to a good long walk. For the dog, it’s more than just a quick lap of the park: it’s a chance to practise their manners, keeping them people-friendly and socialised - and much more likely to find a new home. Although rescue workers do their best to make kennel life bearable, it’s just not the same as the human companionship dogs thrive on, and even a short walk means the world to a lonely hound. Volunteering a few hours’ lead-time a week makes all the difference to the dogs - and could lead to some interesting encounters for you too!

On which note, thanks to the lovely dog-walkers in my village, and apologies for the barking.

I’m lucky to have an editor like Isobel Akenhead at Hodder – I’m grateful for her encouragement, perceptive suggestions, patience, and, most of all, the essay crisis survival kit she sent to get me through the Longhampton Christmas period. I also have a fantastic agent in Lizzy Kremer, who despite being a Cat Person, is a fount of wisdom and jokes; thanks too to Laura West, and the David Higham Translation Rights team.

Ben and Juliet’s Jack Russell terrier was called Minton because on the way to the rescue centre, Ben heard a terrible joke on the radio about a dog called Minton who’d swallowed a shuttlecock. He’d been a bad dog.
Bad
Minton.

‘Bad Minton!’ Ben had yelled gleefully. ‘That is
the
best name for a dog!’

They’d been driving out of Longhampton, just past the big cherry tree that flooded the crest of the hill with a champagne pop of pink blossom. It was three years ago, on the May bank holiday – the first day Ben had taken off in months. Juliet could remember exactly how he’d looked as he’d turned in his seat, brown eyes crinkling with the rubbishness of the joke. ‘Bad Minton! Do you get it, Jools? Badminton? Ha ha, ha ha ha!’

That moment stuck in Juliet’s mind because of two things that were so typically Ben. One was the giggle that bubbled unexpectedly out of his rugged, outdoorsy frame, an infectious delight that had always made her smile too, from the first time she’d heard it – over an equally terrible joke – at school.

The other was the cherry tree. Ben loved it. He was a landscape gardener and had a geeky passion for trees in general, but that one was his favourite in the whole town. They never drove past it in spring without him making her promise that if he died before her, she’d have a big cherry tree planted so at least she could look at the cascading, ballerina-skirt blossom and be happy, once a year.

Juliet couldn’t bear to think about that now. She’d found a different way to drive out of Longhampton because even seeing the tree made her vision blur dangerously at the wheel.

The scruffy little terrier they’d been shown at the rescue centre had been called Dodger, but once he and Ben laid eyes on each other, he was Minton. With his eager eyes and wagging stump of a tail, he looked the type of dog who’d eat a shuttlecock just to make his master laugh. He’d run through
sit
,
beg
and
down
while they were still talking to the rescue manager.

Minton gazed sadly at Juliet from his basket. He was the colour of double cream, apart from one brown patch over his left eye. She’d suggested Patch. Or Captain Hook. It had fallen on deaf ears; Minton and Ben were already shaking hands.

From that moment, Minton was Ben’s dog, despite the fact that Juliet fed him, cleaned up after him and prised the socks out of his mouth. Ben took him to work, sitting up front in his van’s passenger seat, and it was Ben’s long stride that Minton scampered happily to keep up with. Minton and Juliet were best friends now, though. Sometimes she wondered who was looking after whom.

‘Juliet, you look tired. Are you eating?’

She nodded at him.

Juliet squinted. She could have sworn Minton had rolled his eyes at her.

Reluctantly, she tore her gaze away from him and directed it towards her mother. Diane was sitting on the sheet-covered chair, her knees clamped together. Her kind face was taut with worry – and the effort of not showing it. Ben had always said she wasn’t so much a ‘glass half full’ sort, as a ‘glass half empty and made of
glass’
natural worrier.

‘You’re
not
eating,’ she went on. ‘I’ve just had a look in your fridge. All that food I sent over last week is still in there. All out of date now. And it was nice stuff too,’ she added, with a touch of resentment. ‘M&S meals. So you wouldn’t have to cook.’

Diane squinted at her daughter. ‘Yes,’ she said. ‘Actually, you do.’

Juliet knew for a fact that she didn’t. Ten years as a professional caterer, specialising in cupcakes for weddings and gourmet biscuits, meant she’d laid down a fair store of emergency flab rations that she was nowhere near depleting yet. Granted, she didn’t feel much like ploughing through a steak and kidney pie, even a luxury one with organic pastry, but it was amazing how well KitKats still went down. She could eat a whole packet. Sometimes she did. There was no one there to tell her not to.

Juliet looked down at her hands, which
were
now looking older, and thinner. There were fine lines around her gold wedding band. Proper widow’s hands. It gave her a morbid sense of satisfaction, something she could thrust at all those people whose faces said, ‘But you’re too young to be a widow!’ – as if losing the one person who held her entire life in his heart was somehow less devastating, less
real
, because she was only thirty-one.

‘You need to get some fresh air.’ Diane left a cunning pause. ‘Minton needs more exercise. You’re letting him down, keeping him cooped up in here with you.’

Any hint of neglect towards Ben’s dog always nipped Juliet into a response. ‘I
am
walking him!’ she protested.

‘When I go to Tesc—’ She stopped, and looked up.

Diane met her eyes, and her expression was woebegone. Juliet knew she knew. There was no point denying it, and something in her mother’s face – confusion, not just pity – made her jut out her chin and finish.

‘And
when
are you going to Tesco?’ persisted Diane.

‘Kathy Gibbon saw you,’ Diane said. ‘She was coming back off her shift at the hospital. She saw you in the car park. Oh, Juliet! What sort of person does their shopping at
four in the morning
?’

‘The sort of person who likes to go to the supermarket when it’s nice and quiet. When it’s not full of people asking me how I’m coping.’ Juliet patted her knee and Minton leaped up to her side, leaning into her with his firm body. ‘Minton doesn’t mind. He’s got one of those balls with a light in it. It’s fun. Isn’t it?’ she added, to him.

Minton closed his eyes with pleasure as she scratched behind his ears. Making Minton happy was simple.

‘But I
worry
about you, wandering around in the middle of the night on your own.’ Diane’s voice wavered, her head clearly thronging with the full range of horrors that could befall a woman and a small dog in Longhampton’s retail park in the wee small hours. ‘Anything could happen!’

It nearly made Juliet laugh, in an ironic sort of way. Being mugged would take her mind off everything else.

‘Mum,’ she said, very reasonably, ‘what’s the worst thing that could happen to me? My husband died eight months ago, I’m a cook who can’t work because I can’t taste anything, and our so-called forever house is going to have to be forever, with the property market like this. Being mugged doesn’t worry me. I could use the compensation to pay for the new bathroom.’

Diane’s pale eyes widened in cartoon shock behind her glasses and Juliet missed Ben for the fifth time that day, this time for his cheerfully black sense of humour. They’d been the only ones in the family with
any
sense of humour, come to that.

It’s the little things I miss you for most, she thought, bracing herself against the melancholy that washed over her whole body, even now. I just can’t get used to moments like these, when I feel worse than on my own, because you’d have laughed, and it’d have become one of those in-jokes.

She flinched at the thought of the long strands of in-jokes they’d stored up over fifteen years, gone in a blink.

‘Have there been attacks?’ Diane demanded. ‘In the retail park?’

‘No, it’s perfectly safe, Mum.’ Juliet could have kicked herself: that would be going on to Diane and Louise’s list of ‘Places That Were Too Dangerous to Take Toby’. The soft-play area where someone’s toddler had eaten a marble, the coffee shop on the High Street that allows dogs inside, now the retail park.

Minton hadn’t settled. He was still turning round and round on Juliet’s knee, unable to find a comfy spot. He’d always been sociable, but now he seemed to share Juliet’s resentment at having their solitude interrupted.

‘Yes,’ said Juliet shortly. ‘Shall I make us a cup of tea?’ She got up, glad of the chance to move.