Walking With Ghosts (A short story) 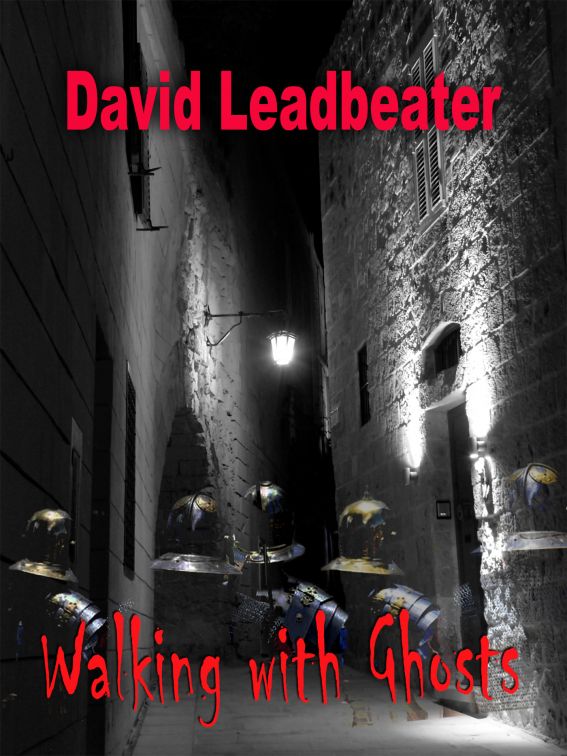 All rights reserved. No part of this publication may be reproduced, distributed, or transmitted in any form or by any means, including photocopying, recording, or other electronic or mechanical methods, without the prior written permission of the publisher/author except in the case of brief quotations embodied in critical reviews and certain other noncommercial uses permitted by copyright law.

All characters in this book are fictitious, and any resemblance to actual persons living or dead is purely coincidental.

Other books by this author:

The Gates of Hell (Matt Drake 3)

All helpful, genuine comments are welcome. I would love to hear from you.

This one’s for the best green-blooded crew that ever graced Mcarthur Glen. . .you know who you are.

Josie Leigh didn’t know it, but she was about to start the longest shift of her life.

Before she left the house she cracked the curtains a bit and gulped down the rest of her coffee. Outside the sky was awash with silver, and the house roofs glimmered and glittered underneath a full moon. The extra light would help her tonight.

Joe Morris. She smiled. Her aging partner was a good old salt, determined to see out his last few months on the job by helping Josie become the best kind of police officer she could be. In six months he’d taught her more than she’d learned in two years of training.

She placed the empty mug carefully on a coaster and sent a last loving glance all the way upstairs and around the corner of the upstairs hallway, right into her daughter’s cosy bed. It had taken a lot for Josie to leave Emily with her partner of two years, Simon, but he had proven his love for Josie’s daughter time and again, and the love was starting to be reciprocated.

Outside, the brisk wind hit her like a blade. She hurried to the car. “Cold as hell,” she said as she tugged at the seat-belt.

Joe Morris took a moment to stare at her. “You stay up all night thinking up these silly statements, Josie?”

She shrugged and grinned, knowing he was teasing. “All work and no play makes Jack. . . you know.” Joe hated horror movies, so Josie considered it her duty to constantly remind him of them.

“Whatever,” he nodded towards the computer mounted on the police car’s dash. “Clock in, Constable Leigh. Time to walk the beat.”

The centre of the city of York was quiet. Josie walked beside Joe Morris and stopped to watch the mist billowing along the Shambles, York’s best known medieval street. They were used to seeing tourists thronging this area; it was a camera interaction magnet, but to see the entirety of the roughly cobbled street and hear the faint squeaking of the swaying shop-signs sent a slight chill through Josie. They heard a dog barking, far-away, almost as if it resided in another dimension, and even a street away some late-night revellers laughed and joked loudly, but a cloak of shadowy silence hung here, and the slow eddy of time drifted past them like the plodding march of a long-dead army.

Josie listened to the groaning stillness. “Nothing going on here, Inspector,” she said. “Umm, shall we move on?”

The formality jolted Morris out of his fugue. “Of course.”

A quick left and a brisk walk brought them out near the Minster, one of the largest churches of its kind in Northern Europe, and boasting a famous
Rose Window.
Thousands of visitors every year were attracted to York’s Gothic cathedral, but 4 a.m. caught the fancy of nothing but the gloom and the darkness.

“1 – 2 – Freddie’s coming for you. . .” Josie shivered despite her own attempt at a joke.
Nightmare on Elm Street
was not the movie to be quoting right now.

“This is one of those nights,” Joe Morris said. “when nothing happens.” He looked around, taking in the ethereal calm like the seasoned pro he was. “Been here before, Josie. It’s gonna be one long, boring bitch of a shift.”

Josie took a moment to adjust her gear, her belt, her too-tight trousers, anything to deliberately avoid her mentor’s eyes. “You ever seen anything. . .umm. . .odd? Truthfully? York is the most haunted city in the world, you know. They say if you take a tape recorder to a place that’s supposed to be haunted and press record, and then take it home and play it back on full volume, you will hear voices that aren’t supposed to be there.”

Joe Morris scratched an eyebrow. “I know all that,” he paused. “And you say you want the truth, Josie, from a friend? Well, I’ll say this: at night around here I’ve learned all bets are off. But if you want it in real talk, Constable, from your Inspector? Then I’d say ‘get a bloody move on, Leigh, and stop wasting our damn time.”

And Josie moved off, following the pavement towards Stonegate, her senses tingling with unease. Joe was getting so close to retirement now he often said he could feel it tightening around his shoulders like the links of heavy chain. His wife had died three years ago; the kids long since, too, had flown and nested elsewhere. The job was, sadly, all he had left.

At Stonegate they paused outside the silent coffee shop on the corner, and looked both ways down the cobbled intersection. Joe shrugged at her. “You choose.”

She pointed to the right, not knowing she had just made the worst decision of her life.

“You gotta read ‘em,” Joe was saying, taking every opportunity to impart his knowledge to his recruit. “Not just the shifty eyes or the damn body language. You gotta learn the art. You can tell a lot by the way a man dresses, by the watch he wears or doesn’t, by the way he responds to a mention of kids or family, or Christmas. It’s all there, right in that reaction.”

Josie thought about her six-year-old, Emily, with her emotions as transparent as summer rain, standing innocent and rational in the clearest light, and said: “What makes a man the man he becomes, Joe? Do you know
that?
”

“Nurture,” he said in a low voice. “I’ve seen a man in all his states, Josie and, believe me,
nature’s
got nothin’ to do with it.”

They plodded on through the still night, checking out the blank windows and darkened shop interiors, and the only noise was the noise of their passing.

Abruptly, shockingly, there was a scream. Josie had never heard anything like it. At first she froze, unable to make the connection between the calm night and the terror conveyed by that single, terrible wail. But then Joe snapped straight and began to run. Josie raced after him on legs made rubbery by fear, her gear bouncing around on her vest and belt.

“What the hell?” Joe was talking, talking fast to himself as if he needed the reassurance. Josie didn’t have time to ask as he skidded to a halt and studied the shadows to his left.

“It came from Swinegate?” Josie panted.

Joe didn’t even need to shrug. The answer was obvious.
Been here before. . .

But Josie wondered if he ever had been
here
before. They took off down Swinegate, past Kennedy’s Wine bar where she met and fancied Simon on the first date, and stopped at the blind corner.

Now, to their right, was a darkened courtyard. “You couldn’t have known, Joe,” Josie now said with a shudder. “You’ve heard this before, right?”

Joe made no reply. The silence made the hairs on the back of Josie’s neck stand on end.

“There’s a story,” Joe was whispering, as if afraid he might wake something up, “that tells of an orphanage that stood around here in the eighteenth century. There were murders, terrible rituals. A greedy man fed the poor kids very little, and gave them no medicine, so they frequently died. He didn’t dispose of the bodies, but left them to fester and rot. Then, on one foggy night just like this he thought he heard their screams, the screams of the tormented dead, so he killed all the remaining children in fits of fury. When the authorities found him, wandering the streets covered in blood, they took him to Bootham Asylum, a place then regarded as truly haunted.”

Josie’s eyes were wider than dinner plates. “Are you seriously trying to scare the crap out of me? That’s a story for sleepovers or campfires, surely?”

Joe shrugged, not laughing. “All these stories have a basis. Somewhere. The children’s ghosts are said to be trapped there, screaming still.”

“One other thing, and the reason I mention all this. The girl only screams once, and only when something terrible is about to happen.”

“Man fell through the floor of his flat into a take-away’s kitchen, been dead for days. And three people were killed in a bar fight down Micklegate.”

Joe fixed her with an unreadable gaze. “We’ll see.”

“It’s a square with a shop in the middle,” Josie mustered her courage, wondering if this were Joe’s way of a test. “You go left, I’ll go right. We meet at the top.”

Joe nodded and walked off immediately. Josie was left with a thundering heart and two fists clenched so tightly her finger joints hurt. She made to move forward but fear made her freeze. For one moment there was an urge to flee, a bright red-hot sting of self-preservation, but then she remembered just why the Hell she was here. In this job. On this night.

She had seen more selfless love since the birth of her daughter than she ever thought possible. Emily was born premature and admitted to the wonderful care of SCBU, the Special Care Baby Unit of York District Hospital. Her husband had then left her citing that he needed time to concentrate on his career. Since then people had been helping her. The incredible, selfless nurses of SCBU. Her family. Even
his
family. Neighbours. Now Simon.

And then Emily herself. She found out quickly what only a true parent can ever know- that a child can turn sadness into joy with but a single chuckle.

《我不喜欢这世界我只喜欢你》 by 乔一
Underworld (Dark Passage) by M.L. Woolley
The Village King by Eddie McGarrity
Betting On Love by Hodges, Cheris
The Immortal Rules by Julie Kagawa
Wild by Eve Langlais
Bearly Consenting: Russet Falls Series by W.H. Vega
Everything He Desires by Thalia Frost
Yours Until Death by Gunnar Staalesen
The Patient Is a Shark [Shape-Shifter Clinic 3] (Siren Publishing Ménage Everlasting) by Cara Adams
Our partner