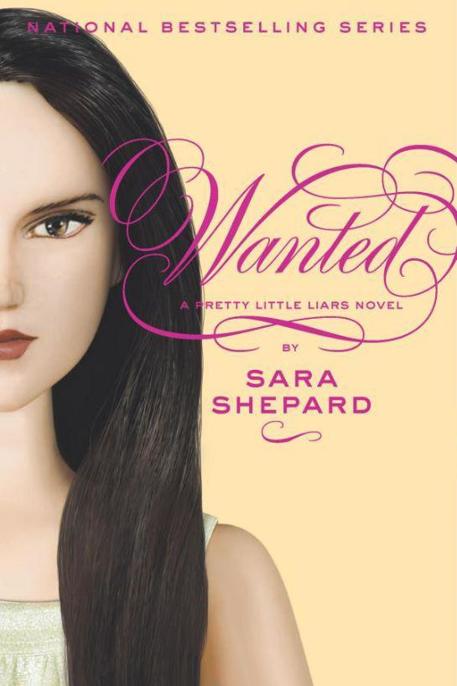 There are two tragedies in life. One is to lose your heart’s desire.

The other is to gain

Chapter 1:   The Dead Ringer
Back Ads

Back ad for The Lying Game

They say a picture’s worth a thousand words. A surveillance camera catches a beautiful brunette making off with a handful of gold Tiffany baubles. A paparazzi shot exposes an affair between a young starlet and a married director. But what the picture can’t tell you is that the girl was a store clerk taking those bracelets to her boss, or that the director filed for divorce last month.

So what about a family photo? Take, for instance, a shot of a mom, dad, sister, and brother grinning on the front porch of a luxe Victorian mansion. Now look closer. Dad’s smile seems kind of forced. Mom’s gazing toward the left at a neighbor’s house—or maybe at a
neighbor
. Brother grips the porch rail tight, like he wants to crack it in half. And sister smiles mysteriously, as if she’s hiding a delicious secret. Half of the backyard is torn up by a giant yellow bulldozer, and there’s someone lurking way in the background, nothing but a blur of blond hair and pale skin. Is that a guy…or a girl? It could be a trick of the light or a finger smudge.

Or perhaps all those things you missed upon first glance mean much more than you could ever guess.

Four pretty girls in Rosewood believe they have a clear picture of what happened the night their best friend went missing. Someone has been arrested, and the case has been closed. But if they comb through their memories once more, focusing on the flickers in the periphery, the uneasy feelings they can’t pin down, and
the people right under their noses
, that picture might change right before their eyes. If they take a deep breath and look again, they might be astonished—even terrified—by what they discover.

Truth is stranger than fiction, after all. Especially here in Rosewood.

The June evening was misty and moonless. Crickets chirped in the thick, black woods, and the whole neighborhood smelled like fresh azaleas, citronella candles, and bleachy pool chlorine. Brand-new luxury cars were tucked away in three-car garages. As with everything else in Rosewood, Pennsylvania, a chic, rustic suburb about twenty miles from Philadelphia, not a blade of grass was out of place, and everyone was exactly where they were supposed to be.

Alison DiLaurentis, Spencer Hastings, Aria Montgomery, Emily Fields, and Hanna Marin turned on all the lights in the converted barn apartment behind Spencer’s house, settling in for their end-of-seventh-grade sleepover. Spencer quickly dumped several empty Corona bottles into the recycling bin. They’d belonged to her sister, Melissa, and Melissa’s boyfriend, Ian Thomas, whom Spencer had banished from the barn moments before. Emily and Aria flung their yellow and maroon LeSportsac overnight totes in a pile in the corner. Hanna flopped on the couch and started munching on leftover popcorn. Ali latched the barn door and turned the dead bolt. No one heard the squish of footsteps in the dewy grass or saw the light fog of breath on the window.

“So, girls,” Alison piped up, perching on the arm of the leather couch. “I know the perfect thing to do.” The window wasn’t open, but the glass was thin, and her words carried through the pane, rustling through the calm June night. “I learned how to hypnotize people. I could do you all at once.”

There was a long pause. Spencer picked at the waistband of her field hockey skirt. Aria and Hanna exchanged a worried look.

“
Pleeeeze?
” Ali said, pressing her palms together as if in prayer. She glanced over at Emily. “You’ll let me hypnotize
you
, right?”

Everyone else reluctantly agreed. How could they not? Ali was the most popular girl at Rosewood Day, the school they attended. Guys wanted to date her, girls wanted to be her, parents thought she was perfect, and she always got everything she wanted. It was a dream come true that Ali had chosen Spencer, Aria, Emily, and Hanna to be part of her clique at the Rosewood Day Charity Drive the year before, transforming each of them from blah, nondescript Nobodies to important, sparkling Somebodies. Ali took them on weekend trips to the Poconos, gave them mud masks, and provided the golden ticket to the best table in the cafeteria. But she also forced them to do things they didn’t want to do—like The Jenna Thing, a horrific secret they vowed to keep until they died. Sometimes they felt like lifeless dolls, with Ali coordinating their every move.

Lately, Ali had been ignoring their calls, hanging out with her older field hockey friends, and was seemingly only interested in the girls’ secrets and shortcomings. She teased Aria about her dad’s clandestine relationship with one of his students. She poked fun at Hanna’s growing obsession with Cheez-Its—and her growing waistline. She mocked Emily’s puppy dog crush on her, and threatened to reveal that Spencer had kissed her sister’s boyfriend. Each girl suspected their friendship with Ali was slipping through their fingers. Deep down, they wondered if they’d be friends with Ali after tonight.

Ali rushed around, lighting the vanilla-scented candles with a Zippo and pulling the blinds closed—just in case. She told the girls to sit cross-legged on the circular braided rug. They did so, looking fretful and uncomfortable. What might happen if Ali actually managed to hypnotize them? They were all hiding huge secrets that only Ali knew. Secrets they didn’t want broadcast to each other, let alone the rest of the world.

Ali began to slowly count backward from one hundred, her voice feathery and soothing. No one moved. Ali tiptoed around the room, passing the huge oak computer desk, the overstuffed bookshelves, and the tiny kitchen. Everyone remained compliant and statue-still. Never once did anyone look toward the window. Nor did any of them hear the mechanical
snap
s of the clunky old Polaroid camera as it captured their blurry images or the
whir
sas the camera spit out the photos to the ground. There was enough space through one of the slats in the blinds to get a decent picture of all of them.

When Ali was almost to one, Spencer jumped up and ran right to the back window. “It’s too dark in here,” Spencer proclaimed. She whipped back the curtains, letting in the night. “I want it lighter. Maybe everyone does.”

Alison looked at the others. Their eyes were sealed closed. Her lips curled up in a smirk. “Close them,” she insisted.

But then Ali turned back to Spencer. Her fingers were curled into fists. “You think
I
should take a pill?”

Snap.
Another photo fell from the camera. The image slowly materialized from nothingness.

Spencer and Ali stared at each other for a long time. The other girls remained on the carpet. Hanna and Emily swayed back and forth, tangled in a dream, but Aria’s eyes were half open. Her gaze was on Spencer and Ali, watching the fight unfold but feeling powerless to stop it.

“Fine.” Ali strode onto the porch, slamming the door hard behind her.

Ali stood for a moment, heaving deep breaths. The leaves on the trees swished and whispered. The yellow lantern-style light over the front door illuminated the left half of Ali’s body. There was an angry and determined scowl on her face. She didn’t glance fearfully around the side of the house. She didn’t sense the dangerous presence that lurked so close. Maybe it was because Ali was preoccupied, keeping a dangerous secret of her own. She had someone to meet right now. And someone else to avoid.

After a moment, Ali started down the path. Seconds later, the barn door slammed again. Spencer followed, catching up with her on the other side of the trees. Their whispers grew more and more fevered and furious.
You try to steal everything away from me. But you can’t have this. You read about it in my diary, didn’t you? You think kissing Ian was so special, but he told me that you didn’t even know how.

There was the slick, wet sound of shoes slipping on grass. A shriek. A dangerous
crack.
A horrified gasp. And then silence.