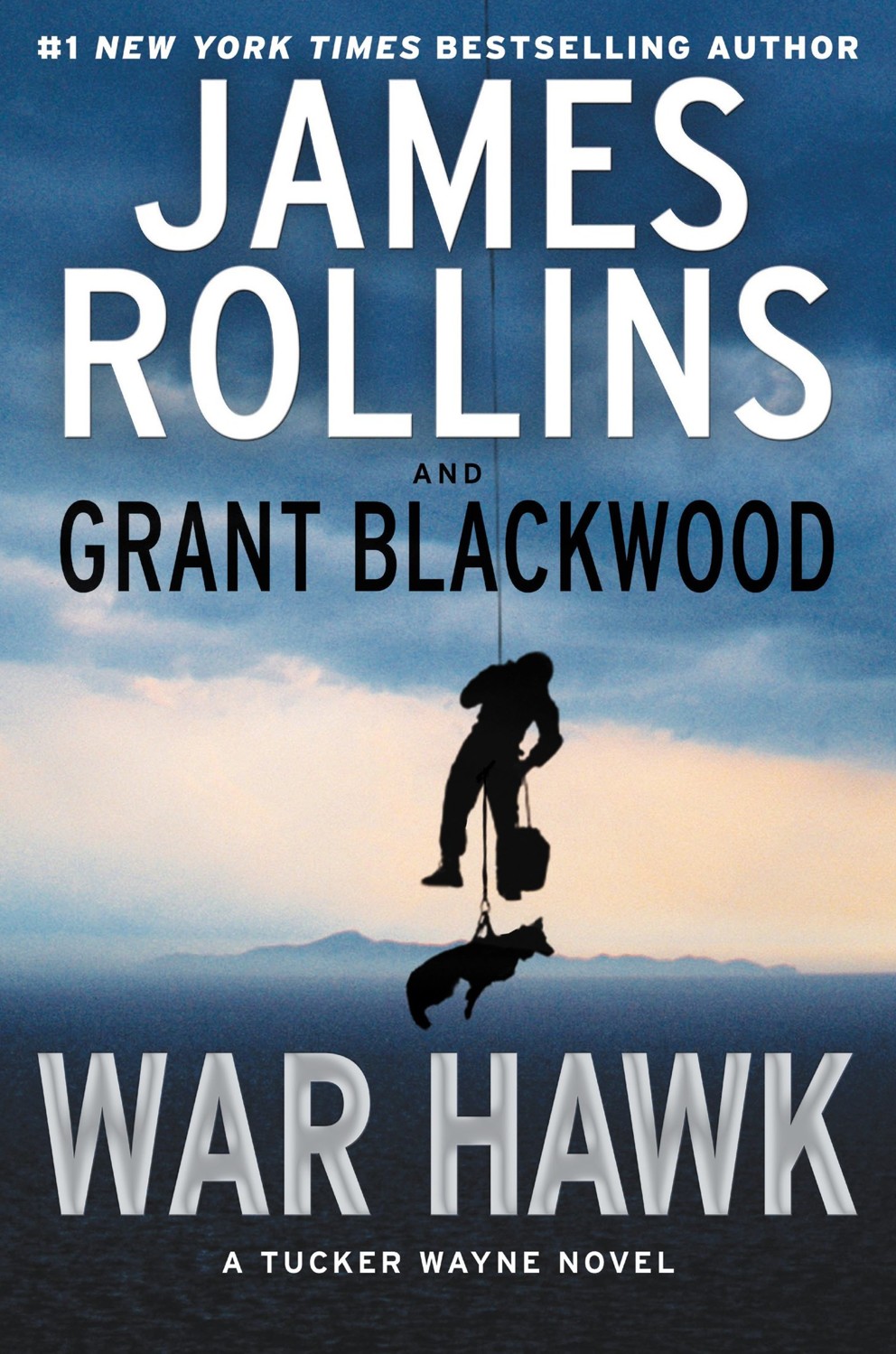 To all the four-legged warriors out there . . .

And those who serve alongside them.

Thank you for your dedication and service.

To those many folks who have joined Grant and me on this journey with Tucker and his stalwart companion, Kane, I appreciate all your help, criticism, and encouragement. First, I must thank my critique group, which has been with me lo these many, many years: Sally Ann Barnes, Chris Crowe, Lee Garrett, Jane O’Riva, Denny Grayson, Leonard Little, Judy Prey, Caroline Williams, Christian Riley, Tod Todd, Chris Smith, and Amy Rogers. And as always, a special thanks to Steve Prey for the great maps . . . and to David Sylvian for always having my back! To everyone at HarperCollins who makes me shine: Michael Morrison, Liate Stehlik, Danielle Bartlett, Kaitlyn Kennedy, Josh Marwell, Lynn Grady, Richard Aquan, Tom Egner, Shawn Nicholls, and Ana Maria Allessi. Last, of course, a special acknowledgment to my editor for her talent (and infinite patience), Lyssa Keusch, and her colleague Rebecca Lucash; along with my agents, Russ Galen and Danny Baror (including his remarkable daughter Heather Baror). And as always, I must stress any and all errors of fact or detail in this book fall squarely on my own shoulders, of which hopefully there are not too many.

Few in the Abwehr’s military intelligence knew his true name or even his intent here on British soil. The spy went by the code name
Geist
, the German word for
ghost
, and for him failure was not an option.

He lay on his stomach in a muddy ditch, with ice-encrusted cattails stabbing at his face. He ignored the midnight cold, the frigid gusts of breezes, the ache of his frozen joints. Instead, he concentrated on the view through the binoculars fixed to his face.

He and his assigned team lay alongside the banks of a small lake. A hundred yards off, on the opposite shore, a row of stately rural mansions sat dark, brightened here and there by the rare sliver of yellow light peeking through blackout curtains. Still, he spotted rolls of barbed wire mounted atop the garden walls of one particular estate.

The place also went by a code name: Station X.

The seemingly nondescript country house masked an operation run by British intelligence, a joint effort by MI6 and the Government Code and Cypher School. In a series of wooden huts set up on those idyllic acres, the Allied forces had gathered the greatest mathematicians and cryptographers from around the globe, including one man, Alan Turing, who was decades ahead of his peers. Station X’s goal was to break the German military’s Enigma code, using tools built by the geniuses here. The group had already succeeded in building an electromechanical decrypting device called The Bombe, and rumors abounded about a new project already under way, to build Colossus, the world’s first programmable electric computer.

But destroying such devices was not his goal this night.

Hidden upon those grounds was a prize beyond anything his superiors could imagine: a breakthrough that held the potential to change the very fate of the world.

And I will possess it—or die trying
.

To his left, his second in command, Lieutenant Hoffman, pulled the collar of his jacket tighter around his neck as an icy rain began to fall. He shifted, cursing his complaint. “
Gott verlassenen Land
.”

Geist kept his binoculars in place as he scolded the head of the commandos. “Silence. If anyone hears you speaking German, we’ll be stuck here for the rest of the war.”

Geist knew a firm hand was needed with the eight-man team under his charge. The members had been handpicked by the Abwehr not only for their superb martial skills but for their grasp of English. Whatever the British might lack in military presence out here in the rural regions, they made up for by a vigilant citizenry.

Geist glanced over his shoulder to the road passing through the woods behind him. A lorry trundled along, its headlights muted by blackout slits.

He wasn’t about to let their presence catch the attention of the passing driver. He and the others kept their faces pressed low until the sound of the truck’s puttering engine faded away.

Geist checked his watch and searched again with his binoculars.

What is taking them so long?

Everything depended on clockwork timing. He and his team had offloaded from a U-boat five days ago onto a lonely beach. Afterward, the group had split into teams of two or three and worked their way across the countryside, ready with papers identifying them as day laborers and farmhands. Once they reached the target area, they had regrouped at a nearby hunting shack, where a cache of weapons awaited them, left by sleeper agents who had prepped the way in advance for Geist’s team.

Only one last detail remained.

A wink of light caught his attention from the grounds neighboring the Bletchley Park estate. It shuttered off once, then back on again—then finally darkness returned.

It was the signal he had been waiting for.

Geist rolled up to an elbow. “Time to move out.”

Geist studied the black-streaked faces around him. They had trained for three months within a life-sized mock-up of Bletchley Park. By now, they could all walk those grounds blindfolded. The only unknown variable was the level of on-site defense. The research campus was secured by both soldiers and guards in civilian clothes.

Geist went over the plan one last time. “Once inside the estate, torch your assigned buildings. Cause as much panic and confusion as possible. In that chaos, Hoffman and I will attempt to secure the package. If shooting starts, take down anything that moves. Is that understood?”

Each man nodded his head.

With everyone prepared—ready to die if need be—the group set off and followed the contour of the lake, sticking to the mist-shrouded forest. Geist led them past the neighboring estates. Most of these old homes were shuttered, awaiting the summer months. Soon servants and staff would be arriving to prepare the country homes for the leisure season, but that was still a couple of weeks away.

It was one of the many reasons this narrow window of opportunity had been chosen by Admiral Wilhelm Canaris, head of German military intelligence. And there was one other time-critical element.

“Access to the bunker should be just up ahead,” Geist whispered back to Hoffman. “Ready the men.”

The British government—aware that Adolf Hitler would soon launch an air war against this island nation—had begun constructing underground bunkers for its critical installations, including Bletchley Park. The bunker at Station X was only half completed, offering a brief break in the secure perimeter around the estate.

Geist intended to take advantage of that weakness this night.

He led his team toward a country house that neighbored Bletchley Park. It was a red-brick Tudor with yellow shutters. He approached the stacked-stone fence that surrounded the grounds and waved his team to flatten against it.

“Where are we going?” Hoffman whispered. “I thought we were going through some bunker.”

“We are.” Only Geist had been given this last piece of intelligence.

He crouched low and hurried toward the gate, which he found unlocked. The winking signal earlier had confirmed that all was in readiness here.

Geist pushed open the gate, slipped through, and led his team across the lawn to the home’s glass-enclosed conservatory. He found another unlocked door there, hurried inside with his men, and crossed to the kitchen. The all-white cabinetry glowed in the moonlight streaming through the windows.