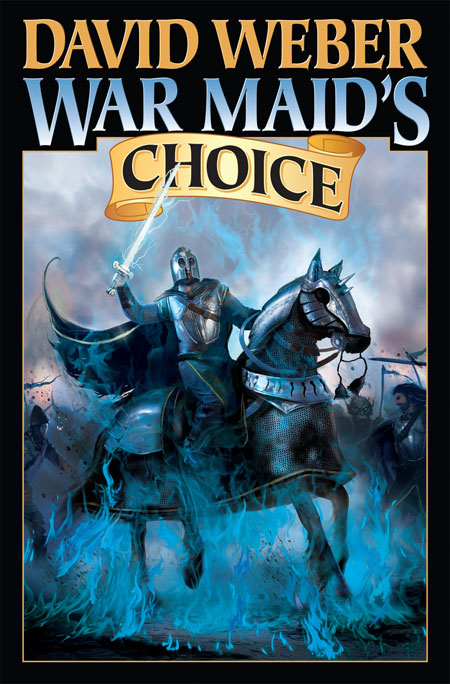 The Honor of the Queen

Crown of Slaves
(with Eric Flint)

Torch of Freedom
(with Eric Flint)

Storm from the Shadows

The Service of the Sword

Empire from the Ashes

Empire from the Ashes
(omnibus)

Path of the Fury

The Excalibur Alternative Oath of Swords

The War God’s Own

The Stars at War I

The Stars at War II

March to the Sea

March to the Stars

Cables of blue-white lightning, tangled with knots of livid green, streaked down the ebon heavens, crashing to earth in a coruscating circle around the stupendous, many-turreted structure. The shortest of those turrets towered hundreds of feet above the endless, smooth pavement stretching away in every direction as far as any mortal eye might have seen, and the glare of lightning danced and glittered from the mirror smooth obsidian of which the enormous palace had been built. Or
formed
, perhaps. There were no tool marks, no lines between blocks of masonry, on that titanic façade, and the light—such as it was—that glowed from its narrow window slits was a pestilential green, less brilliant than the corruption of that lightning yet more sullen, more...poisonous.

Fresh lightning hammered down, replenishing the glaring circle, feeding it, keeping it alive while thunder echoed and rolled and bellowed. Each braided strand lit the purple-bellied clouds from within, momentarily etching their swirling depths upon the eye, and strange, unclean shapes flew in those briefly illuminated deeps. One of those shapes plummeted from the clouds, sweeping lower, riding through the chinks of darkness between the lightning’s pickets. Larger it grew, and larger, insectlike head armed with brutal pincers, enormous bat wings and mighty talons throwing back the glare of lightning until it seemed gilded in the eye-tearing fury of the seething heavens.

At the very last moment it flared its wings and settled upon the balcony of the very highest turret, a thousand feet and more above the lightning-crowned pavement. The size of that obsidian palace dwarfed even its stature, and a rider stepped from its back to the balcony and disappeared within.

More lightning sizzled and howled out of the darkness, smashing into the earth with redoubled ferocity, bolt following bolt, driving that circle of fury higher and brighter as if that flying shape’s arrival had been a signal, and perhaps it had.

The throne room was impossibly vast.

It couldn’t possibly have been as large as it seemed, and yet it was. In some way no mortal could have described, it was vaster than whole worlds and yet small enough the purple-cloaked figure which swept into it could cross it in no more than a dozen strides, and a strange perfume—sweet and seductive, yet undergirt by the scent of something long dead—drifted on its air. The newcomer ignored the six others who had been gathered there, awaiting his arrival. He stalked past them, ascending the high throne against the huge chamber’s rear wall and seated himself, and the wan, green radiance which had filled the room flared abruptly higher and brighter as he sat. A nimbus of deadly green fire hissed above his hooded head, and balls of the same lurid radiance crackled into existence high overhead, dancing and swirling beneath the soaring, vaulted ceiling like lost galaxies trapped in the throne room’s miasma of incense.

Like the palace itself, the throne was a single, seamlessly extruded outcropping of obsidian, but this obsidian was veined with gold, and its surface glittered with diamonds, emeralds, and precious gems. The arms ended in carven demon’s faces, each encrusted with more gold, more gems, and each held a mangled, dismembered body in its fangs. Rubies dripped from their jaws in glittering, lovingly detailed streams of blood, and a huge, haughty face looked down from the wall above the throne, etched across the stone in bas-relief and glittering with still more gold. As the figure seated upon the throne threw back the hood of his cloak, the face which was revealed matched that upon the wall.

Phrobus Orfro, once the seventh son of Orr All-Father and Kontifrio, gazed down upon his chosen mate and their children, and his expression was not a happy one.

“I wonder, sometimes, which of you is the least competent,” he said abruptly. “The competition is so fierce I can’t make up my mind between you.”

His voice was deep, beautifully modulated, yet something seemed to scream somewhere inside those resonant, perfectly articulated tones, and only one of the six beings gathered before him returned his glare levelly. Krashnark Phrofro stood with square shoulders, arms crossed, refusing to cringe, and Phrobus’ eyes glittered. Yet he let the defiance—if such it was—pass. Krashnark was the strongest of his children, the only one who might have openly challenged his own position, but there was scant fear of that. Not from Krashnark. There was no lack of ambition or surfeit of mercy in his second son, and he was the most powerful of all of Phrobus children. Yet that strength was hobbled by his perverse, inner code of honor. He neither gave nor asked quarter, but his oath was unbreakable, which was why Phrobus felt no fear of Krashnark’s rebellion, for he had sworn fealty to his father. It was unthinkable that he might raise his hand against Phrobus after swearing that oath...and none of the others, not even—or perhaps especially—Shīgū would ever have dared.

“All of you know the stakes for which we play,” he continued, “yet none of you seems capable of accomplishing even the simplest task.”

“In fairness, Father,” one of his other children said, raising her head and using one hand to draw glorious red hair back from her face to reveal pupil-less eyes as black as his throne’s obsidian, “that isn’t precisely correct. Things have gone...poorly in several universes. That’s unfortunately true, but we’ve succeeded in others.”

Her voice was calm, respectful, yet pointed, and Phrobus gritted his teeth. Carnadosa was his youngest child, and although she’d been careful not to say it, many of those other successes had been her doing—a point she obviously wasn’t above making by
not
making it. Yet not even a god or a goddess could deal with all the possible alternative realities of every potential universe. There had to be some division of labor, and in all too many of those realities which Carnadosa—and Krashnark—had not overseen, Phrobus’ plans had failed catastrophically. He could feel his other children’s, and his wife’s, hatred seething like the lightning outside his palace as they glared at Carnadosa for underlining their failures, yet they dared not speak.

“Yes,” he said after a moment. “We
have
succeeded in some, but we’ve failed in far too many others. We can afford no more losses, especially in those where victory had seemed within our grasp. Too much hangs on what happens there, which is the reason your accursed uncle is striving hard to snatch them back from us, yet none of you seem capable of stopping him. I’ve looked into the future, Carnadosa. If we fail to stop this slide of events in the Light’s favor, if Tomanāk’s successes continue, our power—the power of
all
of us—may suffer catastrophic damage.”

He paused, letting the implications sink into all of his listeners. It wasn’t as if they shouldn’t have been able to figure out for themselves just how dire their situation might become, but sometimes they needed to be shaken by the scruff of their collective necks before they could step back from their plotting and mutual betrayals long enough to really think about the nature of their struggle with the Gods of Light.

He leaned back in his throne, glaring down at them, his own thoughts running back over the ages since his failed rebellion against his own father. It was his brother’s fault, he told himself once more, thunder rolling outside the palace in echo of his inner rage. It had been Tomanāk who’d rallied the others after the devastating surprise of Phrobus’ initial attack. Tomanāk who’d personally struck Phrobus down, taken his original name from him and given him the one he bore now. “Truth Bender,” that was what his name meant, and in the depth of his defeat, he’d been unable to reject it when his brother fastened it upon him forever. Not even he now remembered what his name had once been, and he thought perhaps he hated Tomanāk most of all for that.

Yet much as he hated—and feared—Tomanāk, he hated the myriad worlds of mortals even more.

His attempt to seize Orr’s power as his own had very nearly succeeded, but in the moment in which Tomanāk ripped it back out of his grasp, that power had fractured, broken into more pieces than even a god could count. Worse, each of those pieces had taken on its own life, its own existence, and when that happened, the fates of all the gods had become captive to those insignificant, puny mites crawling about all of the worlds upon worlds which had spilled from the riven, shattered power he’d hungered to make his own. A new concept had come into existence in that moment—the concept of
time
. The concept of a future...and an end. And not even the gods themselves were immune to it, able to ignore the endless, steady trickle of years sliding one after another into the maw of eternity. Yet worse still, far worse, was the intolerable discovery that those ephemeral mortals held
his
fate in their hands.

In many ways, only the fragmenting of Orr’s power had preserved Phrobus’ own life, for there was no doubt what Tomanāk would have done with him if only he could. But all of them were entrapped in the uncertain fate Phrobus had unwittingly, unintentionally, created. Orr himself had been diminished, weakened, stripped of his ability to command the tides of fate and left as captive to those capricious mortals as Phrobus himself. The restoration of his power was beyond his own reach, and neither the remaining Gods of Light nor Phrobus could repair it for him. It must heal itself in the fullness of that mortal creation—time.

But
how
would it heal itself? It had taken Phrobus centuries to realize the question could even be asked, for no one had ever considered the possibility that Orr’s power
could
be shattered, and so no one had ever considered what might happen if it was. He knew how frustrated Tomanāk was that the cataclysmic collision of so many potential alternate futures had prevented him from slaying him for his treachery, yet Tomanāk had no choice. The death of a god,
any
god, would have released far too much additional power, poured far too much additional uncertainty into the shattered present and chaotic future of Orr’s realm. And so Tomanāk had been forced to let him live, let him leave the home from which he’d been cast for his crimes, let him carve out his own realm in the broken confusion of too many realities.

The Dakota Cipher by William Dietrich
The Superhero's Son (Book 1): The Superhero's Test by Flint, Lucas
Spiked by Mark Arsenault
Fall Into Place (Taking the Fall) by Riley, Alexa
Doctor Sax by Jack Kerouac
The Sport of Kings by C. E. Morgan
Kelly's Jellyfish Romance (Romantic Short Stories) by Belle, Kristina
The Half Truth by Sue Fortin
The Devil and Lou Prophet by Peter Brandvold
Resonance by Erica O'Rourke
Our partner