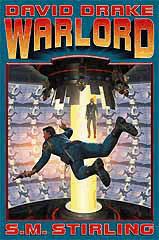 This is a work of fiction. All the characters and events portrayed in this book are fictional, and any resemblance to real people or incidents is purely coincidental.
Copyright © 2003
by S.M. Stirling and David Drake
All rights reserved, including the right to reproduce this book or portions thereof in any form.
A Baen Books Original
Baen Publishing Enterprises
P.O. Box 1403
Riverdale, NY 10471
www.baen.com
ISBN: 0-7434-3587-7
Cover art by David Mattingly
First printing, February 2003
Library of Congress Cataloging-in-Publication Data
Stirling, S.M.

Warlord / by S.M. Stirling & David Drake.
p. cm.
"The General series was originally published as five separate novels: The Forge,
The Hammer, The Anvil, The Steel, and The Sword. Warlord contains half of
the Raj Whitehall saga, which will be concluded in the second omnibus
volume, Conqueror."
ISBN 0-7434-3587-7
1. Life on other planets—Fiction. 2. Space warfare—Fiction. 3. Generals—
Fiction. I. Drake, David. II. Title.

With the Lightnings
Lt. Leary, Commanding

Independent Novels and Collections
Seas of Venus
Foreign Legions
(edited by David Drake)
Ranks of Bronze
Cross the Stars
The Dragon Lord
Birds of Prey
Northworld Trilogy
Redliners
Starliner
All the Way to the Gallows
Grimmer Than Hell
The Undesired Princess and The Enchanted Bunny
(with L. Sprague de Camp)
Lest Darkness Fall and To Bring the Light
(with L. Sprague de Camp)
Armageddon
(edited with Billie Sue Mosiman)
Killer
(with Karl Edward Wagner)
The Belisarius series (with Eric Flint):
An Oblique Approach
In the Heart of Darkness
Destiny's Shield
Fortune's Stroke
The Tide of Victory 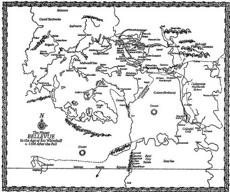 Raj Whitehall spun on one heel, the beam of his carbide lamp stabbing out scarcely faster than the pistol in his right hand.

"Shit," he muttered, as the light fell on the corner of the underground chamber. The rodent was dead now, dangling from the jaws of a cat-sized spersauroid, a slinky thing with a huge head and slender body carried high on four spidery legs. It blinked at them with eyelids that closed to a vertical slit, and then was gone with a rustle of scales against rubble. Raj grimaced. One of the few pleasant things about living in East Residence was that Terran life had mostly replaced the local. But not in the catacombs, it seemed.

Thom Poplanich laughed. "Careful, Raj," he said. "Those bullets will bounce, you know."

Raj grinned back a trifle sheepishly as he holstered the weapon. A genuine five-shot revolver, it was as much a badge of nobleman's rank as was the saber he carried slung over one shoulder. Both were as familiar as his clothes: Whitehall had been born in Descott County, hard country two weeks' journey north of the capital, where men went armed from puberty. The platinum stars and hunting scenes inlaid in the steel of the revolver were a badge as well, of membership in the Governor's Guard.

"Spirit of Man of the Stars," Raj said, and touched the silver wafer etched in holy circuits that hung around his neck. "This place makes my skin crawl." Everyone knew the catacombs under New Residence were ancient and huge . . . but those were just words until you
saw
it. This complex could house the whole population of the capital, with room to spare—and New Residence was the largest city on Earth.

"Not a spot for a picnic," Poplanich agreed.

The abandoned elevator shaft he had found below his apartments ended in this floor of rubble; from the hollow sounds and the way it shifted, there must have been levels below. Rust-streaks marked the lines of ancient machinery. Now there was only the cool gray surface of fused stone, and one half-open door . . . no, wait.

"Look at this," Poplanich said. He walked quickly over the broken rock and flicked his lantern's beam downward, moving with a studied grace. "
That
hasn't been here since the Fall."

It was a tallow candle stub, resting in a congealed puddle of its own grease. There was a smokemark above it, but dust lay thick over all.

"But it's been there long enough," Raj commented, trying the door. It was frozen in its half-open position, but there was just room for his barrel chest. "Hand me the paintstick, will you, Thom?"

They would need to be very careful not to lose their way, down here in the catacombs. He touched his wafer again. Everything around them was a product of men who had lived before the Fall, when the Spirit of Man of the Stars had infused their souls. You could see it in the way the rock was carved, seamless and even, in the strange bits and pieces of shattered machinery, the very materials unfamiliar. There might even be . . .

"If we come across any computers, we'll have to tell the priests," he said.

Thom laughed. "They don't need
genuine
relics any more," he said with easy cynicism. "Haven't you heard what the last synod ruled about the Miraculous Multiplication?"

Raj flushed; they were both just turned twenty-five, but there were times when Thom Poplanich made him feel very much the raw youth, a rustic squire in from the provinces. Even in tweed and leather hunting clothes, the other man had a slim self-assured elegance that spoke of ten generations of urban aristocracy. Raj touched his amulet again. It was comforting to know that this was the genuine article, recovered two centuries ago and blessed by Saint Wu herself. Even if the Church had ruled that belief made the relic holy, rather than the reverse.

He forced himself into the door and pushed with knees and hands, back braced against the wall. For a long moment nothing moved, until he took a deep breath and threw the strength of shoulders and back into it, timing the contraction to the exhalation of his breath the way the family armsman had taught. A seam parted along the side of his tight uniform jacket, and the thick slab slid open with a protesting screech of tearing metal. Raj dropped to the floor in a crouch, panting slightly.

"Showoff," Thom said as he sidled past. There was surprise and slight envy in his tone; his friend grinned.

"A strong back comes in useful for other things than pulling a plow," he said, raising his own lantern. "Let's keep turning to the right."

"Look, there's not much point in going on," he said. This was the fifth level down from their starting-point. Emptiness, offices and storage space, eerily uncorroded metal and the smell of damp stone. And enough computer equipment to stock every church in the Civil Government and the barbarian lands as well.

Poplanich ran a hand over the swivel chair before the terminal. Dust puffed up behind his hand, silver-yellow in the light of the lantern.

"Feel this," he said, fascinated. "It
looks
like leather, but
new
leather. This area's been abandoned since the Fall, it should have rotted away to shreds." He swung the chair back and forth. "A greased axle won't turn that smoothly, and this doesn't even
squeak
."

Raj shrugged. "They had powers before the Fall. The Spirit withdrew them when they proved unworthy."

Thom nodded absently; that was from the Creed. "I still think this was a naval installation," he said, picking up a plastic sign from one desk. It was made of two strips joined at one long edge; one side was blank, and the other bore black letters in the Old Namerique tongue.
Wez cainna bie fyr'd: slavs godda bie sold
.
His lips moved silently, construing it first into modern Namerique, and then into his native Sponglish. He frowned absently.
Well, of course
,
he thought.

"I don't know," Raj replied, heading cautiously out into the corridor again. "The Book of the Fall—hey, there's a stairwell leading down here, hand me the paintstick again—says the military joined the Rebellion." They had both sat through enough droning sermons on
that
.

Thom's teeth flashed in a grin. "Just as my own interpretation—and please keep this from the Invigiles Against Heresy, will you?—I'd say that the Brigade and the Squadron and the others were pretty low-echelon units, out in the wilds when the Fall came. They didn't cause the breakup of the Holy Federation, they just seized power where they could when we were cut off from the Stars."

Raj felt a slight discomfort; that was not outside the canons of interpretation, but it was dangerously free-thinking. "Come on," he said. "Two more levels, then we go back."

"That's a light," Thom said in a hiss as they turned the corner. His foot brushed aside a crumbling human femur; they had seen enough skeletons on this level to grow blasé. A brittle pile of brown-gray bone, hardly marked by the teeth of the rats, bits of rope and stiff leather and rusted metal scattered about it.

Raj squinted, then turned off his lamp. His friend followed suit, and they waited for their eyes to adjust. He could feel the darkness fading in around him, and with it the enormous weight of the catacombs. His mouth felt dry.
That is a light
, he thought. A soft white light that was unlike anything he had ever seen; not like sunlight, stars, fire, or even the harsh actinic arclights that you sometimes saw in the Governor's Palace or the mansions of the very rich. This was the light of the Ancients; the light of the Spirit of Man of the Stars.

"Live equipment," he whispered, genuflecting again.
Blasphemy. Fallen Man's eyes are blind to the Light of the Spirit. I am not worthy
.
With an effort of will he relaxed the rock-tense muscles of his neck and shoulders.

"Thom, we shouldn't
be
here. This is something for a Patriarchal Council, or the Governor." There was a slight tremor in his hands as he drew his pistol, swinging the cylinder out and checking the load. The unnatural gleam shone off the polished brass of the cartridges. He was conscious of the uselessness of the gesture; what good would a revolver be against the powers of the unFallen? Of course, it was no more useless than anything
else
he might do . . .

"Priests . . ." Thom visibly reconsidered. "Priests aren't notably more virtuous than you or I, Raj," he said reasonably. His eyes stayed fixed on the unwinking glimmer, shining slightly with an expression of primal hunger. "Of course, if you're . . . uncertain . . . you can wait here while I check. I wouldn't think less of you for it."

Raj flushed.
I'm too old to be pushed into something stupid by a dare
,
he thought angrily, even as he felt his mouth open.