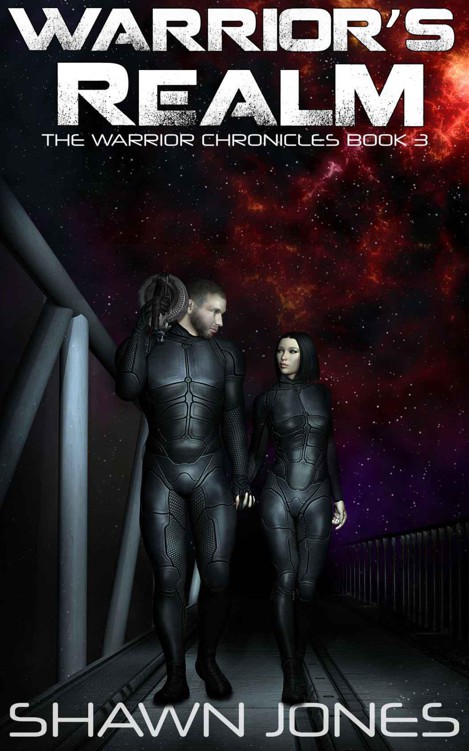 Book Three of The Warrior Chronicles

Regard your soldiers as your children,

and they will follow you into the deepest valleys;

look on them as your own beloved sons,

and they will stand by you even unto death

“General,” Captain Jade “JJ” Jones said over the comm, “We are approaching nominal weapons range. Satellites have been deployed around the other planets and the observation ships are in place.”

“I’m on my way to the bridge, Captain,” Addison replied.

An entire arm of the galaxy was watching this test, and would be for the next three days. When Cort stepped onto the bridge, three other species were present in addition to the ship's human crew. Speral, the small pale female with poisonous spines along her dorsal ridge stood beside a large cylindrical tank which housed Bazal, the octopod, and next to Bazal was Lap, the light beige insect that acted as the leader of the Collaborative Government.

A peaceful organization, the Collaborative Government was comprised of seventy-two voting species and sixty associate races, none of which were allowed to act offensively in any circumstance. So to have these three aliens on his ship, and fifteen other members of the government spread among the observation ships was a little ironic to Cort. They were all here to see if humanity could destroy the crystalline entity that was slowly spreading out from the galactic center, crystallizing every molten-cored body in its path.
Except for that unknown species that somehow got the crystal to change directions. I need to figure that one out.

Wynn Black was standing next to JJ’s command chair. It was Doctor Black who developed the technology they were about to test. Firing a forty by eighty-meter long tungsten plasma slug, the AFS
Remington
would follow that round with and identically-sized round from its second two-kilometer long Gauss cannon. The first round could leave the barrel as fast as a significant fraction of the speed of light and bore a hole several hundred kilometers into the target planet’s core. The second round, a sabot containing a piezoelectric resonator, would follow into the same hole and begin vibrating.

For most planets, this would cause a lot of seismic activity and not much else. But once the crystal had taken over a planet, the resonator would feed energy into the mantle using the crystal’s own resonant frequency. Given enough time, according to Doctor Black, and enough resonators, the planet would shatter, heaving its molten metallic core into space and leaving a debris field of crystal dust.

“What is your plan, Doc?” Cort asked Black after greeting the aliens.

“Oh, hello General. Overkill is the plan for the day. We will fire six pair of slugs into the planet. Four will be equally spaced around the equator and one at each pole. Once we know if it works and how long it takes, I will tweak the resonators for efficiency.”

Over the next three-and-a-half hours, the
Remington
fired her weapons six times. First the main pulse engine would fire its gravity pulse to counter the weapon’s force. Even in space Newton’s Third Law applied. The engine would counter the projected recoil a fraction of a second before the starboard side Gauss cannon would fire its tungsten slug. By the time the first round finished a two kilometer journey down the length of the ship it was plasma. Just as the slug left the first barrel, the second fired its resonator.

“I never dreamed it would go that fast," Black said twelve hours later. Ten minutes before, Second Officer Barb Glass had notified Captain Jones that the planet was measurably vibrating. Jones immediately summoned General Addison and the alien dignitaries, as well as Doctor Black. By the time everyone had arrived on the bridge, the planet on the viewscreen seemed to be out of focus, its blurred edges dull and faded.

The explosion was anticlimactic to say the least. The planet just seemed to come unglued, breaking apart into the space around it. After a few minutes the debris field began to take the shape of a teardrop moving along the ruined planet’s orbit. Ultimately, according to the computer models, it would become a pseudo-comet, moving through the system in the planet’s old orbit.

Four more planets were destroyed in the system before the
Remington
transitioned to the system which served as home to the Collaborative Government. As the home planet appeared before them, Cort turned to the insect Lap and said, “I guess this means that humanity won’t be allowed into your alliance, Lap.”

“No, Cort, you will not. But you will forever be heralded as the species which saved our galactic arm.”

“You know we want a lot more than that, Lap," Cort said.

“Okay, Lap. I’ll leave that to Kim and the diplomats. In the meantime, we will finish the other two Gauss ships and start hitting the crystal planets. The Ares Federation will begin shipping and installing the resonators as soon as the treaty is ratified. Frankly, that’s not my problem. I am more interested in other things.”

“Lap, remember that system that redirected the crystal?”

“They are dangerous, Lap. I need to figure out what’s on their agenda, and how to stop them.”

“They are an isolationist society, I believe," Bazal said. “But General, isolationist is a far cry from dangerous, don’t you think?”

“Isolationist is saying ‘Get out before we put you out.’ Dangerous is shooting before contact can even be made.”

“Then the argument can be made that you are dangerous, General Addison," Bazal said. Cort still wasn’t sure how he heard the octopod, but he did.

“Bazal, I
am
dangerous. You should know that by now.”

“Yes General. I suppose that I do. Of course you will be acting on behalf of the Ares Federation and not the Collaborative Government.”

“Unless I receive orders otherwise, that is correct.”

“Orders? I find it hard to believe that you follow orders, General.”

“So do those that give me the orders, Bazal," Cort laughed.

“Cort, I discovered something odd in the sensor data.” Doctor Black was sitting in Cort’s ship board office with the General, Captain Jones, and Speral. “Our first shots were fired at the fifth planet in the system. When it was destroyed, the other three planets in the system shut down.”

“Yes. Our satellites pick up gravitic signals from the crystal planets. When we destroyed the fifth planet, the other three planets quit emitting those controlled gravity waves. That got me to thinking so I went back over our data. According to the Collaborative Government, the fifth planet was the first in the system to be infected. I am not sure, but I believe that is why things went so smoothly.”

“Well, Cort, I have a theory but I need to experiment to find out if I am right. I cannot do that without putting the ship in potential danger.” Black sensed JJ tensing up next to him but went on, “I think we got lucky. I modeled a map of the crystal incursion into this arm. I think the first planet in any system to be infected becomes that system’s node. I think the system’s other planets connect to the crystal network through that node. We broke the node, so the other planets shut down.

“You mean like they got unplugged?” Cort was becoming more interested with each new sentence from the doctor.

“Exactly. Uh… like the old internet from your time. Think of each system’s first planet as a connecting device. The other planets attach to that device, and through it, the rest of the crystal network.”

“So you think that if we had destroyed one of the other planets first, there might have been some sort of reaction from the others?”

“I don’t know what the response would be, but yes.”

Captain Jones spoke up, saying, “Which means that the planet which made the first connection to this system may be reacting as we speak.”

“I have not followed the data that far, and I would need Speral’s help to do so, but I can say that when we destroyed the first planet, the rest of the planets in the system shut down in the same order they had been infected.”

Cort looked up from the notes he had been taking. “Speral, can you work with Doctor Black to determine which planet connected to this system first?”

“Cort Addison, there is no need. I will gather the necessary data.” Speral closed her eyes and began reading. The others waited while she worked. When her eyes reopened, she said, “Doctor Wynn Black, the last planet to be completely overcome by the crystal prior to the targeted system was Planet 176-2.”

“Captain Jones,” Cort said, “Take us to System 176. I want to know if it has reacted to our attack in any way. Keep your railguns hot for the transition, and be prepared to bug out if we have to.”

“Can we wait two hours, General? That is when the primary bridge crew will come back on duty," Jones asked.

“I won’t tell you how to run your ship, Captain, but I will offer you some advice. You should not wait. You want your people to be ready at any time. And you want any watch ready and able to handle things just as well as any other watch.”

“Yes, General, that is good advice. Thank you, sir.” Jones stood and said, “If you will excuse me, I will go to the bridge now. We will transition in ten minutes. I want to charge all of the coils and make the railguns ready before we jump. Sir.” Jones saluted and walked out of Cort’s office.

Ten minutes later, with Cort, Speral, and Doctor Black on her bridge, Captain Jones gave the order to transition. The ship’s collider created four particles. Two gravitons and two corresponding anti-gravitons. The first graviton was identical to one known to exist in System 176. It was known to be there because one of the ships used to evacuate the system’s seed population had created it and left it there. With its quark blueprint on file, ships that wanted to travel to the system would duplicate the graviton and use its anti-graviton to make the transition. Once in transitional space, the ship would be pulled back into ‘real’ spacetime by the target system’s graviton. It could then use the second graviton in the same way to return to the system of origin.