Following a fascinating retreat with Dr. Frawley, Laura and I travel to nearby Rishikesh, known as the home of Yoga, for the International Yoga Festival at an ashram called Parmarth Niketan. Ashrams are centers for live-in spiritual studies, and like many other ashrams in Rishikesh, Parmarth sits on the banks of the Ganges, with sublime views of the river and the mountains rising toward the Himalayas. The ashram's spiritual leader, fondly known as Swamiji, uses funds from the festival to house and educate orphaned children and raise them in the ancient traditions of Yoga.

Each evening, everyone gathers on the banks of the Ganges at sunset, facing a towering marble statue of Shiva, the archetype of transformation, sitting on a platform over the river, for what Swamiji calls “the best happy hour in the world.” The orphan boys, clad in saffron robes, surround Swamiji on the wide steps facing the river as he leads us in traditional chants to the Divine. There is a musician playing tablas, which are small Indian drums similar to bongos, only with deeper bass notes that sound ethereal. Another musician plays a harmonium, a small wooden box with piano keys and a bellows pump that sounds like an accordion. Swamiji's voice is angelic as he sings ancient Vedic chants celebrating spirit and divinity.
It sounds like a celestial choir as the orphan children lift their voices with him.

Swamiji, radiant in his orange robes, flowing black hair, and full beard, is internationally known as a servant of peace. He often meets with heads of state around the world while collaborating with other spiritual leaders such as the Dalai Lama. Thousands travel from America, Europe, Australia, and throughout India simply to be near him, to receive what is called
Darshan
âsitting in the presence of a master teacher, a true guru. Swamiji wants no control over anyone's life. He simply offers his heart to all and serves as a living embodiment of the human capacity to be a fully self-realized being.

During the Yoga Festival, Laura and I are given the great honor of being asked to join the Parmarth Niketan teaching staff and return to India each year to share Deep Yoga with students from around the world. Then we're invited to sit in
Darshan
with Swamiji. We're guided to a reception area behind the ashram office that looks like a small, intimate park with a grassy lawn, lush flowers, and bougainvillea flowing over a plaster wall painted deep gold. A roofed bamboo frame covers the reception area, with an altar at one end and Swamiji's cushion in the middle.

A few minutes after Laura and I are seated, Swamiji enters and sits in silence. His presence alone overwhelms us with a pure sense of loving kindness, grace, and the experience of being with a great sage. After a few minutes of meditative silence, Swamiji invites us to open our eyes, places one hand over his heart, embraces us with his peaceful and knowing gaze, then softly whispers, “Welcome home.”

I faintly recall my wide-eyed daze watching Tom Brokaw query a prominent war correspondent named Brad Willis during the Persian Gulf War. The NBC News reporter flashed across the TV screen with images of an inferno foreign to my unblemished mind. That was in 1990, when Willis was a fiercely impassioned and intrepid reporter crossing enemy lines into a bomb-struck Iraq, navigating through twisted, torqued bodies on a chemical battlefield, and delivering stories no one else was reporting.

As a communication major at UC San Diego, I longed to one day do what Willis exemplified: cover the world's momentous events, peel back layers of illusion to unveil the truth and, finally, deliver the power of knowledge to the masses in prepackaged media nuggets. There was no sign back then that this tough, hard-edged reporter would become my dear teacher and mentorânot in a journalism class or “J-school” as it's often called but in “Y-school,” as in Yoga. As in “why” love and inner strength matter more than all the victories of war or worldly riches one could garner.

Fast-forward the tape sixteen years: It was a sunshiny day in 2006 when a man with deep pipes and an uncommon serenity strode into my favorite Yoga studio and began to teach. His was no ordinary Yoga class, where bodies performed athletic postures while eyes wandered the room. His voice commanded pure presence, and as we moved on our mats the clock stopped ticking. In moments, a roomful of strangers breathed as one. The idea that we were exercising melted away as
it became a completely sacred experience, a Yoga studio transformed instantly into a temple.

“Reach up to the heavens, drink in light and love, and now bow down to Mother Earth,” Bhava Ram invited. “Take healing light into your palms and send it down through the vessel of your Soul. Feel the radiance inside your heart and know you are a Sacred Being,” he beckoned us over and over again.

I didn't know what he was doing with this highly unusual, spiritual approach to Yoga, but I was instantly hooked. I was now a television news reporter myself and my brain was busy with the endless news stream, yet every single class from Bhava Ram brought my otherwise stressed and occupied mind into deeper stillness, focus, and harmony.

People of all ages, shapes, and shades quickly filled his classes. Bhava and his wife, Laura Plumb, lovingly cultivated a community of modern-day Yogis through their Deep Yoga teacher training school and inspiring workshops, which soon drew seekers from around the country. There was no bottom to their giving. From an urban oasis near downtown San Diego called Ginseng Yoga Studio, I learned there was nothing newfangled about Bhava at all. He was reviving the ancient spiritual practice of healing and self-realization otherwise being overlooked as mere exercise in an overly stimulated Western world.

And why not? Through his personal catastrophes, Brad Willis had essentially been reborn as Bhava Ram. The foreign correspondent had covered unthinkable atrocitiesâKuwaiti torture victims piled into morgues, Kurdish mothers clinging to dead babies in squalid encampments, child prostitutes enslaved in Thailand's red light districtâbut ultimately, he had to slay more penetrating, private demons than any he covered as a journalist. First, a miserably broken back and doctors diagnosing him as “permanently disabled,” and next, late-stage cancer his physicians deemed terminal.

I'd heard that this man, spurred on by indomitable love for his infant son, had recoveredânot through conventional cancer treatments, but through Yoga. But, how? Ever the journalist, I was curious about the details.

Even after years of studying with this master, I didn't know how he actually overcame these seemingly insurmountable ailments. This book, at long last, answers that question and tells his extraordinary story with the lucid detail of an esteemed journalist. Whoever you are, whatever your challenges, this text is a treasure that can lead you into a new understanding about your life and how to live it fully.

This is what Bhava has gifted me. As fate would have it, I was an accomplished journalist with PBS in my mid-thirties when I fell ill with a chronic disease that mystified the medical establishment. There was no known cure, doctors said. Debilitating symptoms forced me to quit my career and retreat into a world of stillness. In my darkest, most dreaded moments, Bhava gave me what I had lost entirely: hope, faith, belief in myself, and something beyond the scared little me curled up in bed. I knew if this man could crawl out of the doorway of disability and death, certainly I could heal, too. He taught me tools to resuscitate myselfâthe same basic protocol that filled his broken, cancer-ridden body with strength and well-being. Through years of diligent practice inspired by Bhava, I feel healthier than I have in a decade and happier than I ever was before the illness.

Something about him inspires one to greatness. Bhava routinely produces miracles in his students. A sixty-year-old woman riddled with cancer tumors went into full remission, another student with fibromyalgia bid farewell to all pain medications and the pain itself, an older man immobilized for decades by depression started doing handstands and climbing mountains.

As a journalist, Brad Willis reported what mattered in the news with courage and devotion. As a teacher, Bhava Ram shares what's truly important in life with even greater devotion and a sense of humility and compassion that is palpable and inspiring. He is living proof of how courage triumphs over all rational prognosis and odds, how deep and abiding love for a child can conquer all, and how we each harbor unseen capacity to heal from whatever wounds life inflicts.

As I imagine all authors experience, once I began ruminating upon whom to thank for making this book possible, a flood of familiar names and faces flowed through my heart. Most notably, of course, is my son, Morgan, who provided the love and inspiration that prompted me to launch my healing journey. Thank you, my son. As the years have passed since that day you pleaded, “Get up, Daddy,” you continue to inspire me. It's my greatest blessing in life to watch you grow into manhood as one of the most centered, authentic, kind, and loving people I have ever known.

To Morgan's mother, Pamela, thank you for so many good times and for standing by me during so many of the bad times. You are a wonderful mother and a truly good person.

To my wife, Laura, thank you for being my best friend, my partner in Yoga, my teacher, and my beloved. It was you who provided the ultimate affirmation for the writing of this book, and it was your encouragement along the way that nourished and sustained me.

I thank my sisters, Valerie and Pamela, and my mother, Doris, for embracing me upon my return from Hong Kong as a broken man. You stood beside me even in my darkest days and I love you eternally.

I am ever grateful to Dr. Emmett Miller, whose wisdom and guidance helped me heal on all levels. I thank Yoga teachers Savita Geuther, Rene Riley, Debbie Adams, Linda and Jean-Pierre Marquez, and Michael Lee for getting me started in my journey into Yoga. I thank Rod Stryker, Dr. David Frawley, and Pujya Swamiji for helping me understand and experience the deepest aspects of Vedic wisdom. A deep and heartfelt
Namaste
to all of you.

Thank you, Denise Baddour, for your boundless enthusiasm and support in bringing this memoir to publication and thank you, David Nelson, for being such a great agent. Others who were instrumental in this process include Arlene Matthews, Rebecca Tolin, and Anne Marie Welsh.

To my editor, Debbie Harmsen, you are amazing. You challenged me, you gave me greater clarity, you made me look deeper into my Soul, and you brought out the best in me. My thanks to all the other wonderful people at BenBella Books, including publisher Glenn Yeffeth, Adrienne Lang, Jennifer Canzoneri, Lindsay Marshall, Monica Lowry, and Leigh Camp. I am honored at the privilege of working with each of you. Special thanks to Paul Henderson of Rise Design Studio for designing a beautiful book cover.

My gratitude goes out to Brad and Cindy Bennett, the owners of Ginseng Yoga Studio in San Diego, who played a central role in the establishment of Deep Yoga and have provided Laura and me with a beautiful studio to call home for our teachings. To all Deep Yoga students, I bow to you. You have given me the privilege of living my
dharma
. 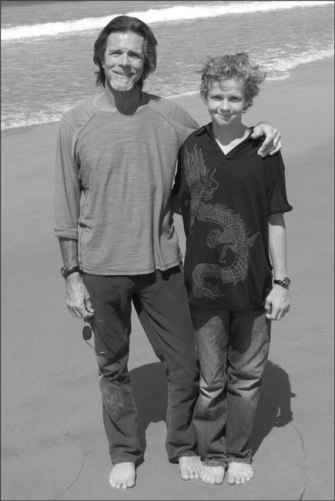