Wasteland Rules: A New Dawn (The World After Book 3) 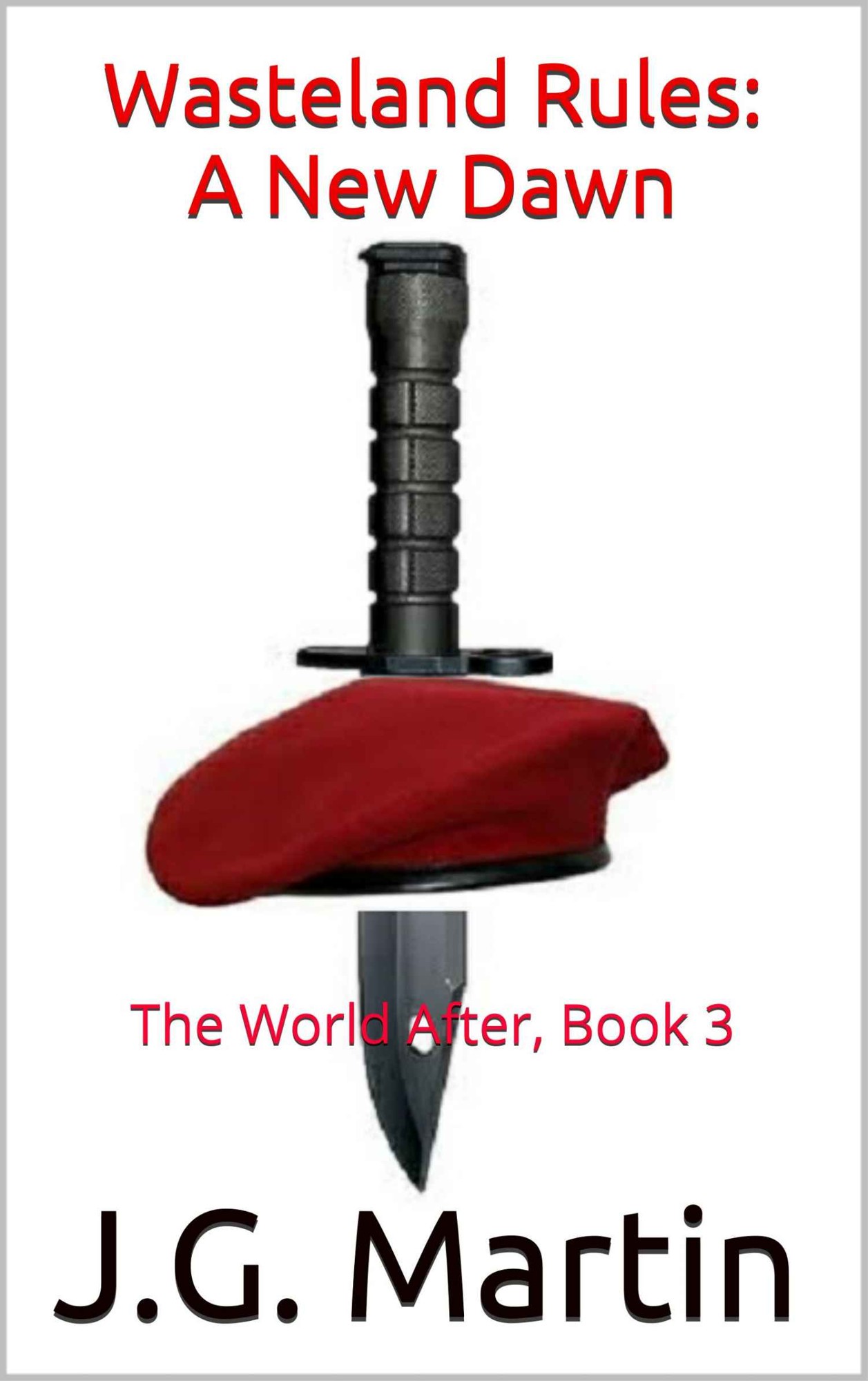 I want to dedicate this to my mom who taught me how to put a
sentence together correctly. And who always encouraged my creativity and
imagination even when I asked a million questions.

Book 1 – Wasteland Rules: Kill or Be Killed – Available via Amazon

The second Rora pushed the
button, an ear piercing high pitched electronic scream blasted out of every
speaker in the control room. The sound was deafening and sent daggers of pain
into her head like she was being stabbed in both ears. It forced her to drop to
the ground involuntarily clutching her ears. Her vision actually blurred and
she felt as if she was going to black out from the pain. She could see the
soldiers reacting the same way, and watched them sink to their knees clutching
their heads.

Several of them opened
fire spasmodically, their fingers tightening reflexively on the triggers of
their rifles. The bullets sprayed indiscriminately around the room, the rifles
swinging wildly without any guidance from their owner. Screens shattered and
sparked and ricochets bounced all around. The lights started to pulse randomly,
but Rora couldn’t tell if that was in her head. Just as she began to pass out,
the horrible screeching ended. It had only lasted a few seconds but the effects
had been devastating.

She couldn’t even gather
her thoughts she was so rattled. At least it had affected everyone equally; the
soldiers were also stunned and barely functional. But they were starting to
recover and she could see the furious look on their captain’s face. He raised
his rifle and pointed it directly at her.

As he squeezed the
trigger Derek grabbed her and picked her up, snatching her away as the bullets
from the captain’s gun peppered the control console. She could feel a round
pass through her suit without hitting her, they were so close. She heard Derek
grunt as he must have taken a round or two.  The spot where she had been
seconds before was demolished. The device and screen were destroyed in the
fusillade of bullets.

The device was gone. They
had spent the better part of two weeks avoiding hundreds of killers who were
trying to get their hands on it, and in seconds it was gone. That didn’t matter
though. The mission had been completed, and the device had served its purpose.
Doors was eliminated and the LINC destroyed. Looking back as Derek carried her
through an access door; she could see his face on the monitors melt off into a
skull, and then disintegrate to nothing. She smiled in triumph as she watched
his virtual demise.

Derek put her down as
soon as they got in the corridor and yelled for her to follow him. He took off
running at full speed and she struggled to keep up. His superior genetic
abilities allowed him to run much faster and longer than she could. This was
even after he had sustained several gunshot wounds during the fight in the
control room. He had patched them as they ran and already they had stopped
bleeding and he seemed unaffected.

That wasn’t a surprise,
but what did surprise her was how fast he had recovered from the sonic attack.
His enhanced hearing should have made the effect more devastating to him. Yet
he had been the first to recover and act. Again, Rora made a mental note not to
underestimate him.

As they ran, she realized
the lights flickering had not been in her head. The lights were pulsing and
then they went out. There was a brief moment of darkness before the emergency
lights kicked on. Derek only hesitated to make sure she was keeping up. They
raced through the corridors retracing their steps back to the shuttle. The
soldiers would recover and be after them soon, and they needed to be at the
shuttle and decouple before that happened.

They were about halfway
to the shuttle when they felt the station shift. It was a sudden lurching
movement followed by loud creaking noises. Then Rora found it was a little
easier to run, her steps seemed to be taking her slightly farther forward with
each step. Uh oh, that probably meant the station was shutting down.

“We’re losing gravity!”
She shouted to Derek. “The station is shutting down and I think it has stopped
spinning.”

“Stay against the outer
wall so we have something to brace against.” She told him. “We will probably
end up in zero g and be ‘swimming’ for the shuttle.”

“What about the
environmental systems?”

“We should be off the
station before the air runs out, but we have to hurry. If the thrusters holding
the station in orbit stop working, it will descend into the atmosphere.” She
warned.

“You mean it will crash
into the Earth?” He asked excitedly.

“Yes, but it will take
some time for the orbit to decay. We need to be on the shuttle and decouple
before it gets too bad.”

The gravity continued to
decrease and shortly they were both floating in the corridor. They used the
door frames as leverage and were almost running along the outside wall as they
made their way towards where the shuttle was docked. Rora gasped in horror as
she saw the bulkhead door was closed ahead of them. A red light indicated it
was locked. The doors were designed to close in an emergency and the station
shutting down certainly qualified.

Derek reached the door
first and tried to pry it open to no avail. She reached the console and looked
for a way to hack it, but the panel was shut down. The station was on emergency
lockdown and now they were trapped. Miraculously, the door suddenly slid open.

“We’re almost to the
shuttle; if you hurry you can join us.” Derek told him.

“Unfortunately, I cannot.”
The Voice told him resignedly. “I need to stay here to manually control the
station’s functions so you can escape. I was only able to gain partial control,
so I can open the doors for you and keep the emergency thrusters working for a
short time. But that will only buy you a little time to escape.”

“Can’t you set some sort
of program to do that for you?” Derek asked anxiously.

“No, everything must be
done from here.”

“What about the drones?”
Derek inquired.

“All dead.” The Voice
informed them. “The feedback from Doors’ ‘death’ fried their chips, making them
brain dead.”

“So you are sacrificing
yourself for us?” Rora yelled, knowing that he could hear her.

Derek switched the phone to
speaker mode so she could hear the reply. “Yes, but I wouldn’t want to return
home like this, I would be a freak. My mission is over and there is nothing
left for me on Earth. Good luck. It has been an honor working with you.”

“The honor was ours.”
Derek said brokenly. “We will never forget what you did for us, my friend.”

“Don’t waste the
opportunity you have been given…” The Voice replied seriously and then
disconnected.

Rora couldn’t see Derek
too closely, but it looked like he had a tear in his eye. The Voice’s sacrifice
had apparently struck an emotional chord with him. Yet again, she was surprised
by Derek. She had not thought him capable of that emotion. He was a surprisingly
complex man, and that made him even more dangerous.

With the Voice clearing
the way, they quickly reached the airlock to the shuttle and scrambled on
board. Rora could see they had cleaned up the mess from the Faceless spy’s
melted body. The remaining two crew members and the Commander were already
strapped in. There was an anxious look on Anna’s face that eased when Rora and
Derek came on board. The Commander and the pilot still looked worried.

“What happened?” Commander
Khodorov demanded as soon as they got on board.

“We completed the mission,
but shutting down Doors shut down the station.” Derek informed him quickly.
“Its orbit is starting to degrade. We need to get out of here ASAP!”