Read We Die Alone: A WWII Epic of Escape and Endurance Online

We Die Alone: A WWII Epic of Escape and Endurance 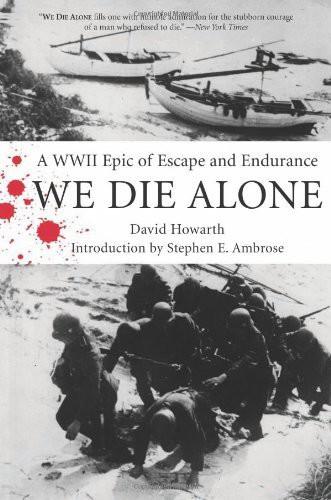 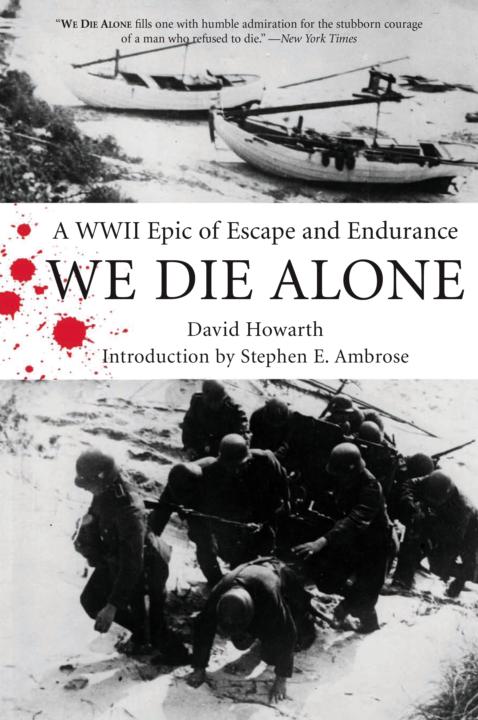 The Tragedy in Tromso
55

Attempt on the Frontier
164

I WRITE FOR A LIVING, which means I spend much of my time
reading, whether books or documents or memoirs or whatever, to
provide material for my writing. I seldom read novels but I do read
stories of men caught in unusual circumstances or doing things that
are remarkable. My research gives me wonderful books to read,
including such favorites as The Journals of Lewis and Clark or Dwight
D. Eisenhower's Crusade in Europe or Richard Nixon's Presidential
Memoirs or Ulysses S. Grant's Memoirs. Reading for pleasure, on the
other hand, usually gives me an escape from work and on the rarest
of occasions something to remember and on a very few occasionsI can count them on less than the fingers of one hand-a book that
I absolutely cannot put down until I've finished it and one that I can
never forget. These are Charles Frazier's Cold Mountain, E. B. Sledge's
With the Old Breed, Slavomir Rawicz's The Long Walk, and now
David Howarth's We Die Alone.

We Die Alone is set in 1943 and is about World War II. Yet it is a
very unusual story of war, for in it fewer than a dozen men get killed
by enemy fire, and it is an account of a failed mission. Looking back,
the mission might seem foolhardy. But the men who planned it
worked as carefully as they could, and the men who went to carry it
out did so knowing that the risks were great and the stakes were high.

Simply put, a small boat sailed from the Shetland Islands-the
most northerly part of Britain-to Nazi-occupied Norway. The boat
contained a dozen Norwegian commandos who wanted to help free
their country. Trained in Britain, they were being sent to organize
some resistance to the German occupiers and to gather information
about German attacks on the convoys sailing to the Soviet Union.
But in their own homeland, they were betrayed, and all but one were
killed.

The survivor was Jan Baalsrud, and this is his story. There is
almost no "action" in it; instead it is a story of perseverance such as
the world has seldom, if ever, seen before or since-the perseverance
of Jan and the villagers of the far north of Norway. The men and
women who helped Jan, who ceaselessly risked their own lives to save
his, even when he was apparently a hopeless cripple with nothing
whatsoever to offer anyone, and managed impossible-to-believe feats
in keeping him alive. But though he did not know it himself, Jan did
have something to offer them. He offered them, the people of an
occupied nation, the chance to strike back. Outwitting the Nazis,
they eventually got him to neutral Sweden with help from the Lapps,
who are themselves about as memorable as it is possible to be.

Jan astonishes us with his bravery and endurance. So do the villagers. His actions came because of his will to live, and because of his
hatred of Hitler and his Nazis. Hitler had sown a lot of hate around
the world. He got it in return. The Jews hated him and his Nazis, as
did the Russians, the Poles, the Yugoslavs, the French, the Americans,
the Danes, the Norwegians, and many others. The young men from
these groups signed up to fight against the Germans. Jan was one of
them. What he did-what all the Norwegians and Lapps did-must
be admired. In Jan's case, we are all of us struck dumb by his bravery
and endurance, which astonish everyone.

I HEARD THE bare bones of this story during the war, soon after it
happened, and I mentioned it briefly in my book The Shetland Bus.
All that I knew about it then was based on a report which was written in a Swedish hospital by a man called Jan Baalsrud. It was a
graphic report, but Baalsrud was very ill when he wrote it, and it left
a lot unsaid. One could see that there was much more in the story,
some things which Baalsrud had forgotten and others he had never
known, although he played the main part in it. But it was not until
ten years later that I had a chance to talk it over with him, and persuade him to come with me to the far north of Norway where it happened, to try to find out the whole truth of it.

Now that I have found it out and written it down, I am rather
afraid of being accused of exaggeration. Parts of it are difficult to
believe. But I have seen nearly all the places which are mentioned in
this book, and met nearly all the people. Not one of the people knew
the whole story, but each of them had a most vivid recollection of his
own part in it. Each of their individual stories fit together, and also
confirm what Baalsrud himself remembered. Some minor events are
matters of deduction, but none of it is imaginary. Here and there I
have altered a name or an unimportant detail to avoid offending
people; but otherwise, I am convinced that this account is true.

EVEN AT the end of March, on the Arctic coast of northern Norway,
there is no sign of spring. By then, the polar winter night is over. At
midwinter, it has been dark all day; at midsummer, the sun will shine
all night; and in between, at the vernal equinox, the days draw out so
quickly that each one is noticeably longer than the last. But the whole
land is still covered thickly with ice and snow to the very edge of the
sea. There is nothing green at all: no flowers or grass, and no buds on
the stunted trees. Sometimes there are clear days at that time of year,
and then the coast glitters with a blinding brilliance in the sunlight;
but more often it is swept by high winds and hidden by frozen mist
and driven snow.

It was on that coast, on the 29th of March, 1943, that this story
really began. On that day a fishing-boat made landfall there, six days
out from the Shetland Islands, with twelve men on board. Its arrival
in those distant enemy waters in the third year of the war, within
sight of a land which was occupied by the Germans, was the result of
a lot of thought and careful preparation; but within a day of its
arrival all the plans which had been made were blown to pieces, and
everything which happened after that, the tragedies and adventures
and self-sacrifice, and the single triumph, was simply a matter of
chance; not the outcome of any plan at all, but only of luck, both
good and bad, and of courage and faithfulness.