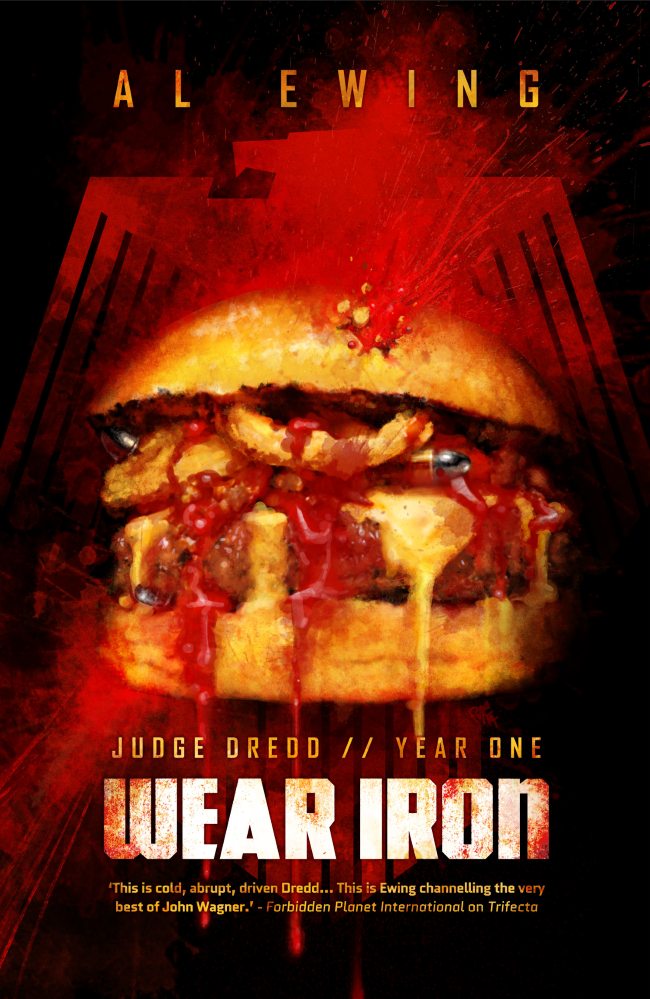 Kingdom of the Blind
, David Bishop

Sins of the Father
, Mitchel Scanlon

Fiends of the Eastern Front

Twilight of the Dead
, David Bishop

The first bullet scored a trench down the security guard’s cheek, glanced off the bone of the jaw and then buried itself in the plasteen behind him. The second round made a neat hole just above the man’s left eye, pushed its way through his brain and ploughed out of the back of the skull in a shower of blood and fragments. The guard’s eyes rolled back and he staggered once, his feet doing a little shuffle like a soft-shoe entertainer in an old-time cabaret club; a macabre two-step. His finger tightened reflexively on his own trigger, sending a bullet wild, a stray lump of lead that careened off the polished chrome of the front counter and into some poor woman’s leg.

Then he finally dropped.

The second guard hesitated—Strader could see the desire to be a hero warring in his eyes with the urge to lower his gun, survive, maybe go home to see his wife and kids again—and then Petersen opened up with the stuttergun and took him apart like a jigsaw puzzle.

Petersen wasn’t the best aim, but with a stuttergun all you had to do was point it in roughly the right direction and hold on tight. The hardest part was lifting the damn thing. It had stopping power, Strader had to admit that much.

Which didn’t change the fact that they should never have brought it along in the first place. It was too much gun for a simple jewellery-store heist like this—the wrong gun for any kind of serious work. It was cheaply made, prone to jams and misfires, and it only had three or four seconds of sustained fire in it before the ammo ran out. After that, changing out the mag and loading fresh ammo was so fiddly and overcomplicated that it could easily get you killed—and it usually did. Stutterguns had a reputation.

And yet somehow this piece of crap, notorious in its day as a wartime boondoggle slapped together by some enterprising defence contractors to line their pockets at President Booth’s expense, had become the go-to killing machine for the juve gangs that were on the rise in the blocks. Probably because they
were
juves, because they didn’t know any better—after all, the stuttergun was big, it was mean-looking, and it made a mess. What else was there to care about?

So the gangs were using it for drive-bys, assassinations, block rumbles—lots of spraying and praying, firing indiscriminately like a kid with a water pistol. Most often they’d end up taking out two or three cits for every rival gang member, until whatever Judge was first on the scene took them out in turn.

So while no serious professional worth his salt would touch a stuttergun, the thing had grown itself a reputation among the average Joe Cit as a thing to be feared—the weapon of choice for psychos and crazies who didn’t give a damn about collateral damage. It was on all the news channels—special bulletins telling you how to recognise one being pointed at you and what to do about it.
Anything you’re told to,
was the short version.

And suddenly, otherwise-smart people like Petersen were taking a second look.

There were advantages to being feared, Petersen had argued at the planning sessions—advantages they maybe couldn’t ignore. He’d explained at length that he didn’t want to bring one of these deathtraps along on a heist to
shoot
the damn thing—hell, no, he wasn’t
stupid
. He’s just wave it around a little—it was all about the threat, that implicit promise of violence.

“They see these things every day on the vid,” he’d said earnestly, with the smile of a man who thought he’d discovered the secret of turning lead into gold, the magical shortcut that was going to make them all millionaires. “They’re already trained to respond—psychologically, you know? They take one good look at that baby, they ain’t gonna think twice. They’ll drop onto their knees and pray we leave enough pieces of them for the Resyk belt! Right? Know what I’m talkin’ about?” He’d guffawed like a donkey on a vid-cartoon. “Hell, you guys probably won’t even
need
to bring anything else!”

Strader didn’t even bother to reply to that one. It wouldn’t have mattered if Petersen was talking about a gun that shot lightning, crapped thunder and counted out the shares for you afterwards—only an idiot relied on someone else’s piece.

Wear Iron.
That was the rule.

Strader hadn’t liked Petersen’s big idea one little bit. For one thing, he’d patiently explained as if talking to a two-year-old, a gang of three professional stick-up merchants with more than twenty years’ experience between them shouldn’t need to play psychological games to knock over a small jewellery store in a chintzy block mall.

For another—but that was when McKittrick, the bagman, had chimed in and cut Strader off. McKittrick thought the idea was ‘badass,’ and thought Strader was wetting his u-fronts over nothing. And with that, Strader was outvoted two to one. The stuttergun was the official fourth member of the gang.

Strader knew he should have walked then and there. Anybody using the word ‘badass’ in the context of work was not somebody you could trust to make the coffee, never mind to help pull off a job.

But he was short on options, still over a barrel after the stommshow in Texas City, a casino heist that’d gone south and left five dead and two more cubed, with Strader in the wind only by the skin of his teeth. People had invested in that one—serious people with serious money and serious ways of getting it back—and his share of this job would go a long way to digging himself out of that particular hole.

Last time he’d talked to the Cowboy—a big, one-eyed Texan who hadn’t given his real name but had given Strader three all-terrain vehicles to make the getaway with, all of which were now smouldering hunks of twisted metal in a judicial impound somewhere—the Cowboy had made it pretty clear that unless Strader came up with the original investment, plus a hefty vig, inside of thirty days, he’d be breathing rockcrete under the new intersection. That had been ten days ago. Time was running out.

Strader didn’t have time to be picky, so he’d let his need—or his greed—get the better of him. He’d swallowed his pride and told himself it’d probably all work out.

And to give Petersen his credit, it had worked out just fine. When Strader, Petersen and McKittrick had burst into that jewellery store, everything had gone as smooth as butter.

For a whole minute.

Petersen had screamed like a futsie and waved his brand-new stuttergun around like a gangster on an old-time vid-show, and the other two had played their part in turn, aiming their .45s at anyone who looked like they might not be getting the message. Four horrified customers hit the floor on command, and the kid behind the counter—some girl fresh out of block college—curled up like a foetus, not even thinking about hitting the silent alarm button under the till. Strader kept a weather eye on the two security guards—they had the biggest potential to make trouble, but right then, in that one perfect moment, they were good boys, the best you could want, keeping their hands well away from their holsters and not letting the thought of death for a paycheque cross their tiny minds.

And in that first golden minute, Strader was happy he’d been proved wrong.

But he wasn’t wrong.

The big, ragged hole in Petersen’s big, ragged idea was this: not all fear is good fear. Three professionals, armed with professional weapons, acting in a professional manner, and very professionally telling Joe Cit just what’d happen if he stepped out of line for even a moment—that created a useful kind of fear. That made Joe Cit afraid of what would happen if he didn’t do what he was told.
These are professionals,
that fear whispered.
You might get through this, if you keep your head and do what the nice men want.

One maniac waving a stuttergun around and screaming his head off, on the other hand, made Joe Cit afraid of what might happen if he
did
do what he was told. That wasn’t useful. That kind of fear was bad for business. It whispered:
these people are crazy, and anything could happen. There’s no percentage in keeping your head. If I were you, I’d start taking chances, because they might just be the last chances you ever take in your short life.

Jackson Jones and Mission Greentop by Mary Quattlebaum
The Sweetest Taboo: An Unconventional Romance by Harper Miller
Baby Come Back by Andrea Smith
Born In Ice by Nora Roberts
Off Campus by AMY JO COUSINS
Sweet Caroline by Rachel Hauck
Out of Time (Face the Music Book 3) by Shona Husk
Archangel by Kathryn Le Veque
House Immortal by Devon Monk
The Sheik and the Bought Bride by Susan Mallery
Our partner